One Legged Wonder… The dual Paralympic champion (Sydney & Athens) and multiple World Champion is a great inspiration to many around the world and was happy to chat at the Surfers Paradise International Criterium about riding with a disability and toughing it out in the harsh world of Professional bike racing. 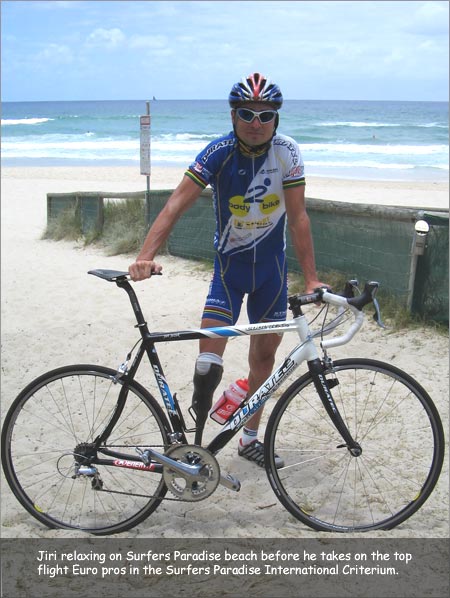 Pez: After your car accident at age 11, when did you actually start riding?

Jiri: I think it was around my 18th because I did a lot of sports before I finally came to the bicycle. I was a keen fan of cycling since I was young but it seemed to me too hard this sport. I was a little too late to this sport but after I saw in the TV some shots from the Paralympic games from Spain in 1992, I saw that the cycling in the Paralympic games for people with disabilities was at a high altitude (level), so I decided to try it and then I became Paralympic champion in Sydney 8 years later.

Pez: What events did you win in Sydney?

Jiri: It was two on the track, the pursuit and the kilometre time trial and it was a very big surprise even for the others as well as I was Mister Nobody coming there, but I trained very hard for two years before and it surprised everybody and I was really very happy.

Pez: Was that the start of your true career as a bike racer?

Jiri: I think this story changed my life as I became more popular in Czech Republic and I was able to do more sponsorship and start my cycling career professionally. Now I am a true professional in cycling. 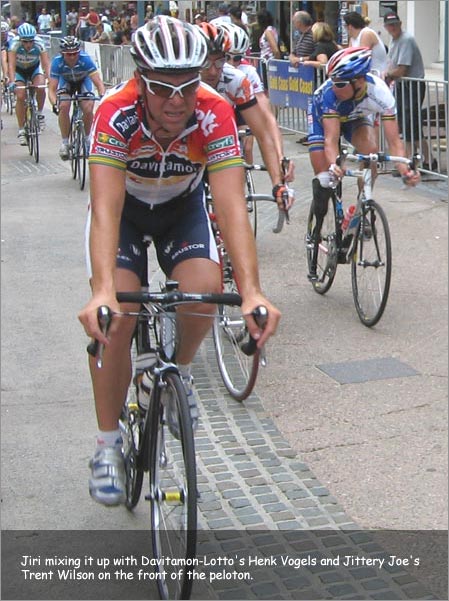 Pez: It must have been very hard at first though, before your Sydney success?

Jiri: Yes it was but now things are better.

Pez: Before your accident you said you were a fan of cycling on TV but did you do any yourself?

Jiri: I was riding, but just for fun. Cycling is very popular in Czech Republic and I go and look at the races, but I just roll on bike myself when I was younger.

Pez: What’s the racing calendar like for riders with disabilities? I know you have the Paralympics every 4 years and the World Championships every year, but what’s in between?

Jiri: Well we have the World Championships every year with full UCI and we have the rainbow jerseys, not in white but in green color. Every 2nd year we have the European Championship and then the Paralympics of course every time after the Olympics. We also have the regional cups which are a series of races through the year in Europe but now 90% of my races are against able bodied athletes because it is more challenge for me and it will make me better for the high level competitions like the Paralympic Games.

Jiri: Yes, it’s great. I am not fit at the moment but it is a good challenge. (Jiri lasted more than Ѕ the race on the tough circuit before retiring. Notably Ѕ the field had already withdrawn before Jiri was dropped.) I came here just for a little bit of promotion for sponsor (Duratec bikes and D&T Sports) and training because the weather is terrible in Czech Republic now. I’m enjoying the training and I am happy to go training with Robbie and the best Australian professionals.

Pez: What is the level like at the top of your field where you are now?

Jiri: It is really high now. The level of Paralympic cycling now is very high, the times for example on the track are not so far away from the best Professionals, so now if you want to be very good you have to race against able bodied athletes at the highest level.

Pez: I was looking at your bike before and there seem to be no modifications. Is that right?

Jiri: I’m very happy that I don’t need any modifications. I just use my normal Duratec bike and I modify my leg instead as it’s better. I attach the cleat straight to the leg and it’s better with no shoe. I decided not to use the shoe as it’s just wasting energy and this is now straight to the pedal.

Pez: Well best of luck today mate and all the best for the coming season – especially at the World’s in France.

Jiri; Thank you, my goals are the track and the pursuit and then the time trial. It will be hard to defend the title, but I will try!

————
The Sponsor Says
As I left Jiri to go and warm up before the race I took Jiri’s sponsor for the Queensland races, Tristan Ius from D&T Sports aside for a few minutes to talk about his rider and what’s it like riding with and getting beaten by a guy with one leg…

Pez: What were your initial impressions when you first met Jiri and saw what he could actually do in a sport like ours with only one leg?

Tristan: Well last year I had Pro Czech rider, David Kupta out here and he told me of this guy who was super strong racing against the able bodied guys with only one leg. It’s just amazing to see, he is so dedicated. It’s his off season but he is already out doing 6 hour rides and smashing everyone.

Pez: Were you surprised that he hasn’t actually modified his bike at all?

Tristan: Definitely. I’ve had a good look at his leg and it’s amazing how it actually works. He can’t actually pull up with his leg when pedalling like you and I as there is no way he can attach it to his thigh properly. He’s had to modify his pedal stroke significantly to get the power needed and I know he does about 75% with his good leg. Because of that he has to do heaps of back exercises every morning so he doesn’t get imbalances from that and have one side pulling the other out. To see him doing an hour every morning when he gets up just shows how dedicated he is.

Pez: You’ve raced a fair bit yourself and have been doing a lot of miles with Jiri in the past 2 weeks, can you tell me anything about his style out there on the road because just watching him warming up today he looks pretty smooth.

Tristan: He is, but you can notice it going uphill when it starts to get a bit jerky as he can’t pull through the whole pedal stroke like us. On the flat though you can’t notice anything, it’s incredible to watch. Just sitting behind him and watching the legs go around knowing how hard I’m working and I’ve got two perfectly good legs!

Well there you have it, a quick insight into the tough world of disability cycling as seen through the eyes of a reigning World Champion. To keep up to date with Jiri’s progress and to test your Czech language skills you can check out Jiri’s webpage and for more on his sponsors’ bikes check out D&T Sports.