Marty Nothstein doesn’t do things half way – so naturally our interview was chock-full of meat ‘n potatoes that could only be enjoyed in two seatings! In Part 2 of our PEZ-Clusive interview, we talk Six Days, career highs and lows, and making the move onto the road.

Marty: Yea, I’d like to finish my career at a couple of the Six-days. This year I didn’t go back at all because I felt like I needed a huge break. At the end of the season I was running on zero gas and I was struggling in a lot of the races, to the point where I felt I was doing major damage to my body. I probably wouldn’t be able to recover if I didn’t skip the six-days this past fall. It was tough to do because the six-days are rather lucrative for me but at the same time I want to end my career on a high note and not just be somebody who wins a couple of the smaller races here and there. It’s tough to explain to people what the six-days are like until you actually stand in the infield or in my experience race one. It’s probably some of the hardest cycling around. 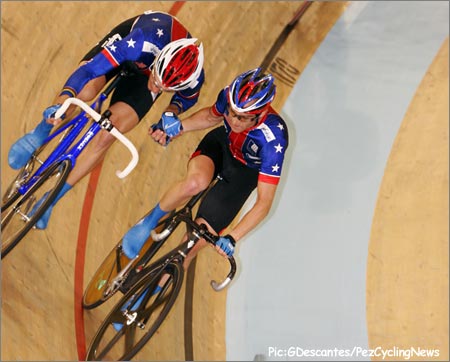 Marty: Riders like Stuart O’Grady and Etienne De Wilde tell me it’s harder than the Tour de France when you do three six-days in a row. They said in a six-day you couldn’t afford to have a day off, sit in the peloton and relax for a day. Everyday and every night you have to get on that track and you have to go full gas, 100% in every race. It catches up to you after two or three sixes. I’ve ridden 21 six-days in my career and it’s been an accomplishment in my book, to start from the bottom of the barrel the first year I was there to becoming one of the best six-day riders out there. It’s a combination of handling your bike in traffic; it’s mayhem out there on the track, having an incredible amount of endurance to compete for six straight days at that level, and having a high threshold for pain. It is an art, racing the sixes. There are some great riders who on paper you think would make great six-day riders and you get them on the track and they’re like a fish out of water.

Everyone I know that has come to watch me at a six-day has said it’s some of the best cycling they’ve ever seen and it is. You are on a 160 – 200 meter track, 15-18 teams, there is not much room for error, and you’re racing at 55kph. It’s awesome and I missed it this year. Every afternoon when you wake up you knew you were going into a race where you would just suffer, suffer for the next four or five hours. What’s worse is the mentality you have over there is that you enjoy it. It’s about as throwback of cycling as cycling gets. It’s a tough mans event and a tough mans mentality. That’s why you see six-day riders at an older age. Once you’ve been there for a while and you learn the system you can then compete for a long time. You almost become numb to it. I’ll probably get some negative remarks for saying this but the business world pales in comparison to the cycling world. Nothing is as hard as racing your bike, especially at the level that I’ve competed in. 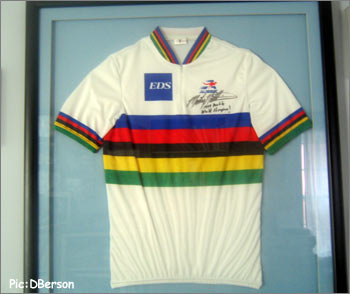 Marty responded to my fan letter many years ago and surprised the heck out of me when I received this jersey.

Pez: What would you consider your career high point and low point? Regarding the latter how did you overcome it?

Marty: I’ve had some incredible low points and some incredible high points on this roller coaster ride. The high point was winning the Olympic Gold Medal in 2000. That’s as good as it got and as good as it gets. Close to that was winning three World Championships titles. The win in New York City was a big high point in my career because I finally broke the ice and won the biggest criterium in America. Throughout the years I’ve been telling people I can win these races. Unfortunately the press never covers the 80k breakaway you’re in where you get caught with two kilometers to go. This has happened to me often up until 2003. I’ve won some races going into 2003 every year but until you win a big one the general public doesn’t understand what’s going on. Some of the great rides I’ve had at the six-days would also be included as highs.

The low point in my career would be winning the Silver medal in 1996. To have the Olympics on my home soil and miss a gold medal by literally a few millimeters was pretty tough. At the end of the Olympics I accomplished my goal to go in there and win a medal. I missed an opportunity and champions capitalize on opportunities in big races. I have in the past but I should have known better in 96. I should have won that race. Missing out on my own soil is what made it such a low. At the same time it was also one of the greatest moments of my cycling career. It pissed me off and I was a man possessed for four years to come back and not only win the Gold Medal in 2000 but to dominate. I looked at myself as an athlete and said there is a lot of room for improvement; you’re not as good as you can be. I changed my training program. Trained more for quickness instead of power and lost about 15 lbs. In 96 I was 218 lbs, in 2000 I hovered around 200 –205 lbs, now I’m at 188. 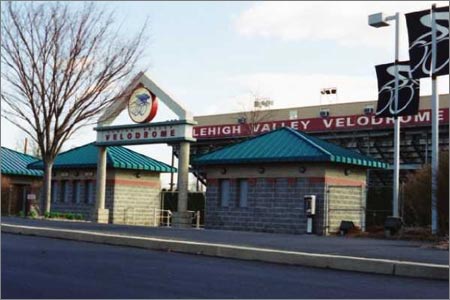 FROM TRACK TO ROAD

Pez: What has the transition been like from being a track racer to primarily a road racer?

Marty: Making that transition from the best sprinter in the world to an endurance rider and making it successfully, proven by winning New York City and becoming won of the best six-day riders in the word shows it was a successful transition. That’s something no one has done since Patric Sercu with nobody in the modern era.

The transition was a much bigger challenge than I anticipated. It’s been successful but I wish I had done it earlier. If I had won the gold in 96 then maybe I would have given it a shot then. I still don’t think my full potential has been tapped on the road. The hardest part of the transition believe it not was going from purely an individual athlete, controlling your own destiny and making things happen in a race, to relying on teammates, being part of a team. Not being a super star every day, which is something, I was used to every time I put the tires on a velodrome was difficult. I was aggressive at first but now I’m calmer and it’s great to help your teammates win. It takes me back to my old baseball and football days when winning as a team was as good as winning as an individual. I’ve been very lucky racing with the Navigators the last four years. We’ve had a great team and had some great riders on the team. That has made my transition so much smoother. Having learned from guys like Davidenko, Vogels, and my director Ed Beamon I’ve had some good guys guiding me.

Marty: Myself winning the Gold Medal.

Pez: Are our closest friends cyclists? If so then who?

Marty: Yes, Erin Hartwell, Jack Simes, Gil Hatton, many actually and we all think we’re tougher than each other. If the old bulls show up on the Derby ride Sundays at 10 then it will be hard.

Marty: I’m missing cycling everyday now knowing that it’s my last year racing as a professional. It feels just like yesterday when I won my first World medal. It’s been a great road and a great career and talking about retirement is tough. Fortunately I have a great platform to step on to as Chief Operating Officer at the Velodrome. I look forward to being involved with cycling and I’ll always be a bicycle rider.

Thanks Marty. We’ll see you on the Derby Ride or at one of the many great events held at the Lehigh Valley Velodrome.

More information on Marty and the Lehigh Valley Velodrome can be found at www.lvvelo.org.

Pacing: Flat Out or Even Steven?