Olympic Gold Medalist, three time Rainbow jersey, and general track God Marty Nothstein recently announced his final year in the pro ranks – of bike racing that is. We sat down with Marty at the Lehigh Valley Velodrome, and talked “Mano a Pezo” on where he’s been, and where he’s going.

“I’ve been told that some people see me as arrogant and cocky,” Marty said. But he explained who that person was, Marty the competitor. When he puts on the helmet he becomes a different person. That’s also why he won so many races. “Sometimes nice guys do finish last,” Marty said. But take the helmet off and the real Marty tries to sign every autograph and respond to every letter received. 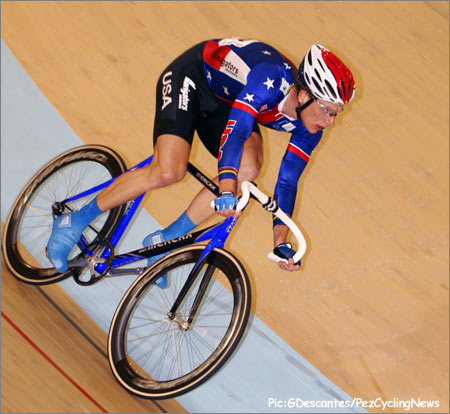 Marty at the ’05 Track Worlds in Los Angeles.

He’s a family man, normal like everyone else. Dressed in khakis and black shirt, like any typical “casual” office, Marty and Pez sat down at the Lehigh Valley Velodrome for our chat.

Pez: If you didn’t become a bicycle racer what would you have wanted to do?

Pez: Tell me about your family.
Marty: My wife’s name is Christi, and I have two children. A 10-year old boy Tylere and a 7-year old girl Devon. I have a black lab named Rex. He’s about seven. Very fit, a hunting dog.

Pez: What are your children into?
Marty: They love cycling. My son plays baseball and football also. My daughter is into everything. She’s a cheerleader and loves sports. They both seem to have some athletic talent at a young age, which is cool and fun. My son also has a four wheel ATV, which he rips around my property and yard with. He’s a bit of a dare devil with it. My daughter is absolutely fearless. She’s pretty amazing at a young age, to the point where it’s scary. The biggest roller coaster she’ll want to go on, she doesn’t care. She wants to go faster in the car, faster on the ATV’s, faster on her bike. It’s all about speed, which is the same way it was for me when I was her age. She’s a lot like her dad, full throttle and see what happens. My son calculates the risk first. He doesn’t mind it but he’ll think about it before it happens.

Pez: What is your normal routine when you’re not away racing?
Marty: I spend a lot of time just getting things organized at my house. There is always something to do there. I love the outdoors. If I’m not racing my bike you can usually find me out hunting and fishing or doing something in the outdoors. In the last few years I’ve gotten into drag racing so I’ve been spending a lot of time pursuing that career also. Other than that just spending some good quality time at home.

Pez: What type of cars are you drag racing in?
Marty: I just became a licensed NHRA Top Alcohol Funny Car Driver with a time in the 1/4 mile of 5.91 seconds @ 236 mph.

MARTY KNOWS HEROS
Pez: Who were your heroes or role models growing up?

Marty: Before I got into cycling I really idolized Bo Jackson. The whole
Multi-sport, Bo Knows, Nike thing, I was really into that during school. As a cyclist I looked up to all the sprinters like Mark Gorski, Lutz Hesslich (East German World Champion Sprinter and Olympic Champion) and Michael Huebner (East German World Champion Sprinter). Greg LeMond was on the list as a cycling hero. Once I really got into cycling I learned the history of the sport. Frank Kramer was the last American World Champion beside myself in the sprints. LeMond was the man and I got to know Greg pretty well through out the years and have a lot of respect for his accomplishments. To this day in my honest opinion feel like he is probably the best cyclist besides Merckx of all time. People tend to forget with Lance being so successful the great years that LeMond missed and who’s to say he wouldn’t be the Tour de France champion six or seven times right now? I wouldn’t bet against it. Plus ride and win some of the other races that Lance doesn’t do.

In defense of Lance I respect him tremendously and he’s a pal of mine. But it just goes to show you how big a business cycling has become and Lance is very intelligent for training and winning the biggest race in the world. If you can pick one race to win you wouldn’t say you’d rather race twenty races. You would say you’d rather win one big one and I have that same mentality as a sprinter. Leading into the Olympic games I was World Champion three times but there was only one other thing missing on my resume and that was being the Olympic Champion. Like Lance I decided to commit myself to the biggest race and win it.

MARTY “THE BUSINESSMAN”
Pez: Tell me about your new position in the business world.

Marty: I’ve been hired on as the new Chief Operating Officer of the Lehigh Valley Velodrome. I’m very excited about the transition from being a professional cyclist to a businessman. It came about a year earlier than expected but at the end of last year (2004) I was hinting to everyone that this year would be my last year of racing as a professional. The position became available and I was encouraged by a lot of people to apply. I went through the interviewing process and here I am sitting at my desk, working on a cold and windy day. I’m real excited to give back to the place that has given me so much. I know the sport of track cycling probably better than anybody else is this country for sure, if not the world. We have a tradition here of producing some of the best track cyclists in the world and if I can contribute to the successes of that even more then it’s just going to be a fantastic ride here.

Pez: What challenges are you facing in your new role?
Marty: For right now the big challenge is to be fiscally responsible. A lot of people associate the Lehigh Valley Velodrome as a having a big drum of money somewhere in the facility and having excess funds and we really don’t. Some of the big challenges right around the corner are fundraising, bringing sponsors into the velodrome, showcasing what we can provide for them which is great entertainment and a lot of exposure for their dollars. On the other hand another challenge of mine here is to produce more Marty Nothsteins. We have a tremendous amount of talent that comes through our world-renowned developmental programs. We’ve produced more champions than anybody and we must continue to improve the developmental programs. Erin Hartwell has been hired to assist me on this project. Nothing will make me happier than going into the 2008 and 2012 Olympics and have the majority of the team come from the Lehigh Valley. If they weren’t born and raised here then I’d like people to come here and want to be trained and race here. I’m going to try and create a cycling Mecca here for track cyclists. I’m confident we can do it. We have the facilities. We have the structure and we have the racing program. We just need to give it the proper guidance that it deserves. It’s a proven fact that you can become Olympic Champion through the same developmental programs that are offered here. They are the same programs I came through so I’m living proof that it does work.

Another challenge we’ll face is to try to increase the international flavor here a little more. Over the last few years I’d say it probably hasn’t been up to par of what it was at one point. I’ve been blind to it because of my commitment to road cycling the last three years and I haven’t been racing here much myself. We also have to bring back the National Team riders. We’re really going to create some excitement this year with our racing programs and our entertainment value. We’re going to make it a fun place to come and watch bicycle racing. 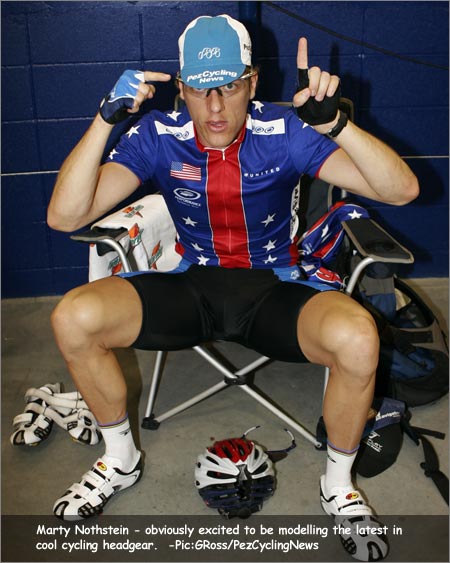 Pez: Once you meet the challenges what would you like to see, what are your goals?

Marty: We have to meet the challenges and keep improving. I’d love to create an Olympic developmental center here for athletes. Not only cyclist but for the greatest athletes in this area. It’s something I’m going to pursue once we get the near term challenges taken care of. What would be a greater thing than to have an Olympic development center right here next to our velodrome? It can be done with the proper guidance. We have some incredible young riders who are better than I was at their age and these kids just have to be guided in the right way. Erin Hartwell and I are in the process of developing a scholarship athlete program to take the best riders, the ones that have shown they are capable of being the best in the world, and provide them coaching by myself and Erin free of charge. It doesn’t get much better than that. It’s like a college player being drafted into the NFL. We don’t want to lose the talent that comes into the programs or the talent that comes through East Coast Velo. (Ed. This is my local club.)

I get asked 500 times each year, Marty, can you coach me and I’ve always told people not until I’m done racing. This is my last year of professional racing so it’s time to start showing kids the tricks of the trade and training techniques, which will help tremendously.

Pez: What are your racing plans for this last season?

Marty: I’m going to do some limited track events. Depending on my schedule I’d like to race a couple Friday nights here at T-town (Lehigh Valley Velodrome), possibly race the National Track Championships in Los Angeles, but more importantly be a part of the Navigators team and help them win some of the biggest races in America. I had a really good spring this year, probably the best I had since riding for the Navigators in 2001. I’m excited and look forward to a great year on the road.

Pez: Will you be at the Wachovia US Professional Championships in Philly?

Marty: That’s undecided at this point. It’s not my decision. That would be Ed Beamon’s decision. I’d love to do the race but Ed is going to put his best guys on the line at that time for those conditions. If I can start then I will help the team any way possible. If not then I’ll be cheering them on. I’m sure I’ll be racing a couple of those races that week as always.

Stay tuned for part two of our interview, and more information on Marty and the Lehigh Valley Velodrome can be found at www.lvvelo.org.
Like PEZ? Why not subscribe to our weekly newsletter to receive updates and reminders on what's cool in road cycling?