We caught up with Discovery Channel’s Matt White at the recent Australian National Criterium Championships in Brisbane to chat about the past couple of years and what’s coming up in 2007 for the likable Aussie.

PEZ: Mate, last time we talked was a fair while ago.

White: Yeah I remember at the start at Zurich there.

PEZ: Some tough times since then with the whole Sony- Ericsson thing?

White: Yeah, Stuey (O’Grady) and I signed a super deal with Sony Ericsson and it was very disappointing as it was a team that with Ferretti (ex Fassa Bortolo director, Giancarlo Ferretti) you never thought there would be financial problems with. It all worked out Ok though as it’s absolutely great being back in Discovery Channel again. There is a little sacrifice there in that I don’t get to do the Tour de France with Discovery but I love being back in the team, I do the Giro, the classics and the Tour is only one race, we get paid to race a 9 month season not just three weeks in July. 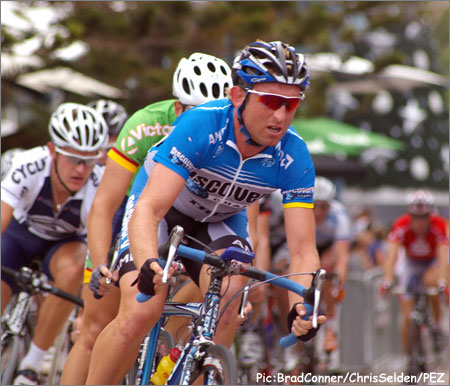 Whitey safely tucked in the field.

PEZ: So you’re definitely not doing the Tour next year?

White: Aagh, you’ve got to be realistic you know? We’re probably going into the race with the No 1 favorite in Basso and they’re going to send six climbers. I can climb good but I can’t climb in the front in the Alps and Pyrenees for 3 weeks. We’ll have a super super team for the race and it’s going to be hard to make that team.

PEZ: Are you looking forward to riding with Basso this year? Have you had much to do with him over the years?

White: Mate, not much at all to be honest. I’ve raced against him for a couple of years at the Giro but if he’s got the form he had this year I think he could do the Giro/Tour double for Discovery. 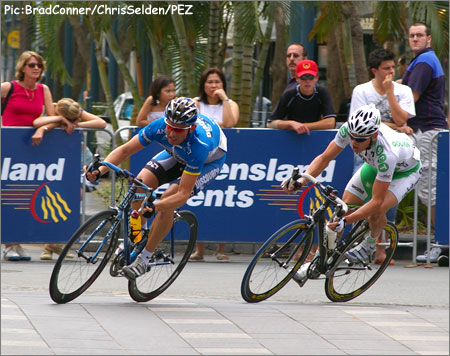 Flying through a turn with Baden Cooke in tow.

PEZ: Mate you were the first guy to leave Postal and then be re-signed by the team a couple of years later and now it’s happening a bit with Antonio Cruz and Levi Leipheimer both coming back to the team this year. Bit of a good example for those guys are you?

White: I think until you go away from the guys and off to other things you don’t realise how good things are. Obviously I had no problem with Postal I just wanted to go away and do my own thing, ride the Tour de France which worked out well for a couple of years with Stuey but coming back to the team was just super.

Here you don’t have to worry about anything which is great, my programme is pretty much set for the year, I’m not going to get a fax at home telling me that I’m racing somewhere in three days time – I know exactly what’s happening all the time. It’s great, you just have to worry about your preparation for the goals that you know are coming up. 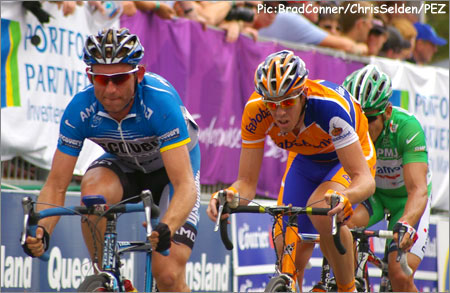 PEZ: There’s some big young talents in the team at the moment – another Aussie in Trent Lowe for example?

White: Oh yeah. I rate Trent very, very highly. He’s young and he hasn’t had any wins yet but what he does is a hill climber and that’s tough to get wins against the best guys in the world when you first start out. He’s a real natural climber though. You get guys like Cadel (Evans) and Mick (Rogers) who have made themselves into climbers but Trent is just totally natural with heaps of talent.

PEZ: Do you see him as a possible GC man in the long run then?

White: Yeah in the long run sure. You don’t want to get carried away, he needs some years to develop and grow but he’s got a big future ahead of him. How it develops in the next couple of years is up to him and the team I guess. I’ve seen a lot of guys come through in the last 5 or 6 years but I rate him very, very highly he’s got a really good mentality also, good work ethic, very switched on for a young guy too.

PEZ: What about Brajkovic for example. Yet another talent at Discovery.

PEZ: He was a bit of surprise this year at the Vuelta for many people.

White: Yeah for many people who don’t know, but you don’t finish 4th at the Tour of Swiss or 5th at Catalunya without the talent, or win an U/23 world time trial also. He’s class, a lot of talent and as you saw he’s good for a week at the Vuelta but he’s young. Everyone talks him up, I think he’ll do the Giro next year and I think he’ll do very well – top ten for sure. 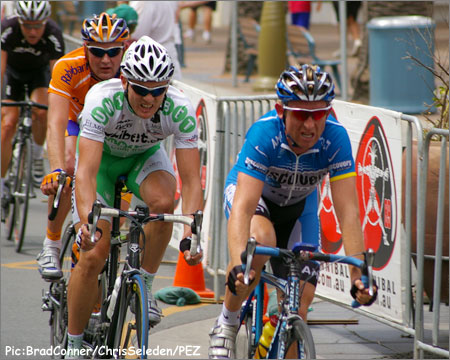 PEZ: It was a bit of a quiet year for Discovery this year with no Armstrong…

White: Yeah, obviously we didn’t win the Tour de France and it was a development year but we still won over twenty something races which was great. We had some great rides at the classics, 2nd in Flanders, we should have had 2nd and 4th in Paris Roubaix and I think it was a successful year. Obviously we didn’t win the Tour and Giro in one year like last year but it’s a good team with a good group of riders.

PEZ: With the talent like Danielson, Brajkovic, Basso etc you must be looking forward to next year.

White: Yeah mate, for sure.

PEZ: Ok, Matty thanks for your time mate and all the best for the coming season.

So another chat with one of the most respected domestiques in the ProTour is over and once again Whitey has managed to talk mostly about others. He truly is a team player, always working for others and the good of team which are the qualities which have made him so highly sought after as a domestique.

The first man ever to be re-signed by Postal/Discovery setup certainly shows how highly respected he is within the Discovery team. Lookout for Whitey’s distinctive style on the front of the peloton at the Classics and the Giro next year as he works tirelessly for his team leaders.