The head honcho at Saunier Duval is a man who knows a little bit about cycling – he was a pro for 17 seasons, rode for 9 teams and won 17 races, including The Tour of Britain, LBL, the Amstel Gold, and came oh so close to a Worlds win in Lugano in 96 – only a rampant Museeuw denied him. Doing his best to ignore the brace of constantly ringing cell phones he totes (one for personal calls and one for business calls) he settled down with a tonic water to answer our questions.

PEZ: You worked with nine teams during your career, where did you learn most?

Mauro: Without a doubt, from Senor Zenone my Director Sportiv at Polti (Gianetti rode for the Italian team in 1995 and 1996). He was a very intelligent person and the first to give me a proper training plan. I worked with Paul Koechli for example for four years and not once in that time did we discuss a training plan for me. Not only that but Zenone made me think differently about life and the world we live in, to think more and not just about cycling, this is a philosophy I have tried to practice here at Saunier. 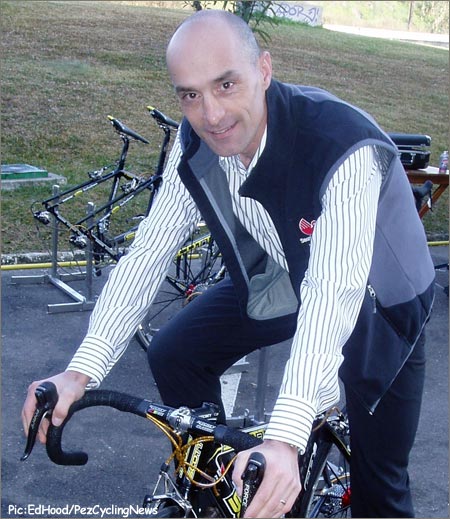 You’d look confident too if your main sponsor just signed on for another 7 years…! 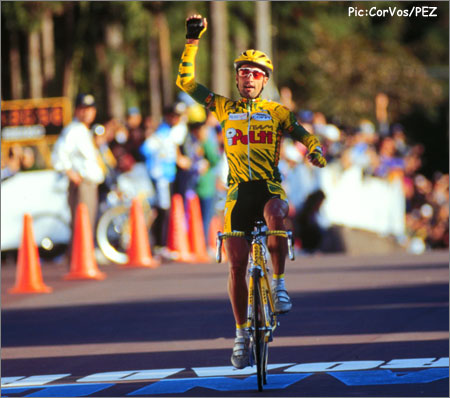 Winning at the Japan Cup all alone.

PEZ: You rode for Cilo-Aufina in 1986, what are the biggest differences between those days and Saunier?

Mauro: (He winces before he answers) 1986! That’s a long time ago! At Cilo we had 14 riders with one bike each and maybe a total of five or six spares; here we have 28 riders and 200 bikes. Cilo had a couple of team cars, at Saunier we have two trucks, three buses plus all the team cars and we have 60 staff. It’s just evolution, things change and the Pro Tour just gets bigger every year; it’s no longer simple to run a professional team. 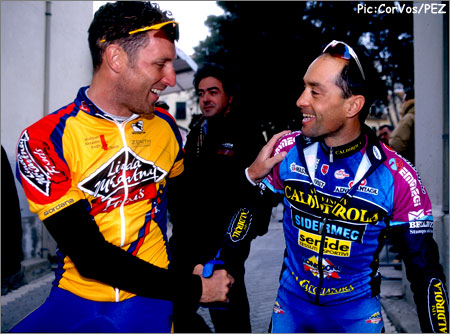 PEZ: This is the team’s fourth year, are you happy with how it has progressed?

Mauro: I stopped racing at the Tour of Lombardy in 2002 and two days later I was in the office of Vini Caldirola to start my career in management. Two years later I started this team, I have had the same major sponsors for four years now and in fact, Saunier have just committed with us until 2013. I think this shows that I have learned what a sponsor’s needs are.

An example; between the 2006 Giro, Tour and Vuelta we entertained 5,000 guests from our various sponsors. The ethos we have built over the last four years is that it is good to win – but not everything; we must be ambassadors for our sponsors and our sport. I have tried to build a little bit different ambiance in the team, one where riders are encouraged to think about life outside of cycling, as Zenone encouraged me to do. This year we are involved in an initiative to plant one million trees, to put something back into the planet, things like this encourage riders to think about the world they live-in and not just the bike. David Canada has been doing a university degree whilst he races with us, riders must learn, not just race.

The image I want to portray is one that is simple but professional, happy with no huge pressure to win – as long as riders attack, make the race and give of themselves then I am happy. 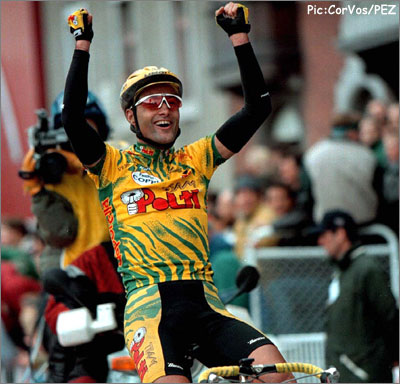 Gianetti’s Saunier Duval team would do well to repeat some of Mauro’s big wins – like this one at Amstel Gold.

Mauro: We will be riding the full Pro Tour calendar, something like 250 days of racing. We are participating in two different races virtually all the time now during the season; for example whilst the Vuelta is in progress we must have a team at the Tour of Poland because it is an important market for our sponsors. 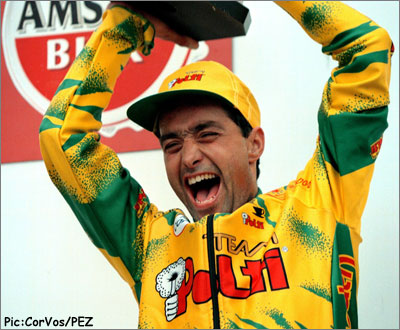 Stoic would not be a good description for the little Swiss.

PEZ: Tell us about your big signing, Iban Mayo.

Mauro: He is undoubtedly still a good rider but he needed a change. He as always enjoyed a very good relationship with one of my sport directors – Matxin and this coupled with the fact that he himself knows he needs a fresh challenge is what caused him to move, he was at Euskaltel for seven seasons remember at Euskaltel, until Samuel Sanchez started to show well, Iban was the team – at every race he had the expectation of the team, the sponsors, the fans and the Basque press.

He is not a rider who responds to that kind of pressure; to me he is a rider like Alex Zulle used to be – if he is happy and relaxed then he will ride great, if he is unhappy then he will ride badly. Here at Saunier, Iban is not the whole team there are Simoni, Millar, Marchante and all the others to share the pressures. 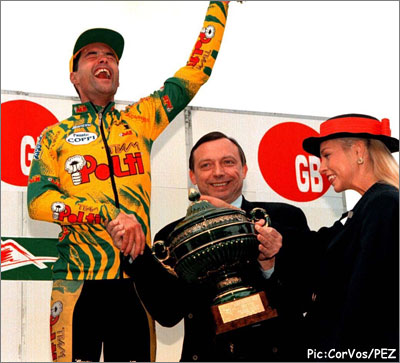 Gianetti was fairly quiet about his win at Liege.

PEZ: Gomez Marchante was fifth in the Vuelta, can he win it one day?

Mauro: He is a very good rider, young, very competitive, good in the time trial and he can get up the hills. I think his main strength is that he gives himself 100%, he does not hold back. He could win the Vuelta but there are a lot of other good riders out there who can win it too, Vinokourov and Valverde for example. I think the main thing that we have to develop with him is to keep a cool head, ride more tactically and not waste energy so that in the last week he is still strong.

PEZ: Tell us about David Millar.

Mauro: He is a star, strong and intelligent, a rider that can win many of the big races, Milan – San Remo, Fleche Wallonne or The Amstel for example are all within his capabilities. The prologue of the Tour De France in London is important for us of course but you cannot have a rider’s season built around seven kilometres, we expect him to ride well in the Tour as a whole, not just the prologue. I think that the world time trial championship is a realistic goal too. 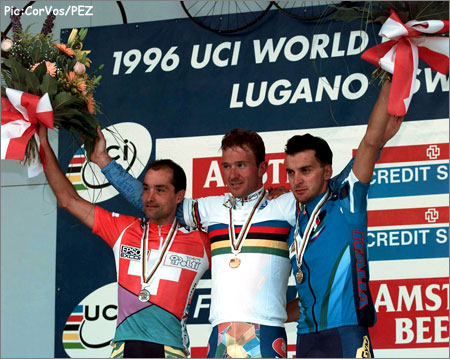 Mauro came oh so close to a Rainbow Jersey in Lugano in ’96.

PEZ: Has Simoni got one more Giro win in him?

Mauro: For sure, Basso will be hard to beat but we will have a good team at the Giro to support Gilberto and I do think it is realistic to look for the win from him.

PEZ: Five riders out at the end of last season and five in, are you happy with the moves?

Mauro: The riders we have taken on board, if you compare them to those they replaced, they are all a little stronger. If you take Raivis Belohvosciks for example, he replaced Marco Pinotti but he is much stronger in the time trial – with every change it is like this, the rider coming in is stronger than the rider leaving so the team as a whole becomes stronger. 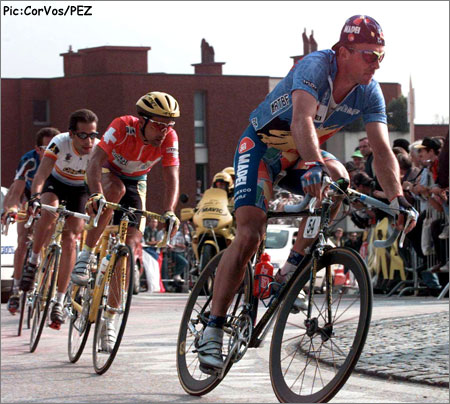 You can’t have too much to regret with 2nd at Worlds.

PEZ: Any regrets about your careers as a rider or manager?

Mauro: No, I never looked back at Lugano, when Museeuw beat me for the rainbow jersey on my home course and thought; ‘if only I’d trained more or eaten better or had more rest before the race’. I do the best I can for each day as it comes, tomorrow it may be something different but if you do your best each then you can do no more.

PEZ would like to thank Mauro for his time and would point-out that he still looks fit enough to race for his own team!