Remember the legendary Red Zinger/ Coors Classic stage race? For those among us whose brains refuse to recall the big-hair, neon-colored, Cold War 1980’s: this was the biggest pro men’s race in North America and arguably the hardest and most prestigious women’s race in the world. Now it’s on DVD and we talked with the race’s long time promoter Michael Aisner. 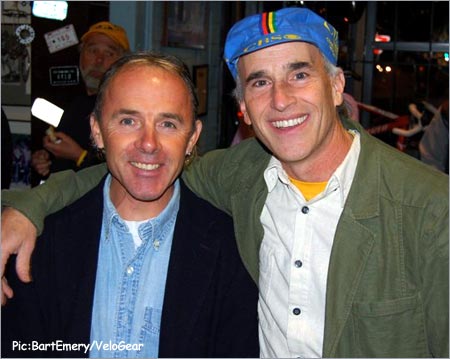 SPECIAL MOMENTS
Pez: A year after the US boycotted the Moscow Olympics, you invited the Russian cycling team to the race, and you had all the teams march into the University of Colorado football stadium – what was that like?

Michael Aisner: Having them here was extraordinary, because I then could play the game of having a legitimate war between Russians and the United States of America, and certainly other countries, played out on bicycles. And for me that was a joy. … The Russians were doing very well. They were leading the bike race at that time. And the people in the stadium knew that. And boy, I didn’t know if they would get boos or shots would ring out or what. But it was one of the most defining roars I have ever heard in my life. Because I think that everyone in this town wanted to acknowledge the Soviets for their accomplishments, and say “You know what? We are just all people.” And for me it was a huge reward. When the Soviets stood on the blocks, in North Boulder Park and they threw the flowers out, for the first time in the eleven or twelve days that they were in Colorado, all of the boys broke into huge smiles. 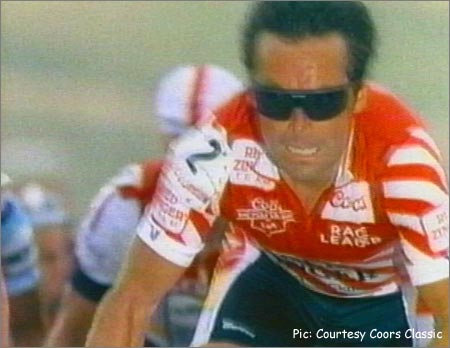 Pez: What were some other emotional highlights?

Aisner: Regarding the women’s division. I loved the fact that they were not second class citizens at the race. The women’s division of that era was led by Connie Carpenter and the other women that we brought over from Europe, and it was as vicious and exciting and competitive as the men’s race.

Other highlights included watching youngsters grow into world-class competitors, in this case, the best in the business. Riders that got their start at the Coors Classic included Andy Hampsten who came to the Coors Classic at the age of 17; Greg LeMond: no question the impact that rider had on this race; an absolute star, Jeannie Longo, who came from France, Connie Carpenter, Jonathan Boyer who went onto the Tour de France; Raul Alcala, who was literally discovered at the Coors Classic, Phil Anderson. These are racers that simply could look back at this race as career stimulators.

Other special moments were working with Kevin Costner down in Baja, getting them excited for the first time about cycling. Having celebrities here was always wonderful. Bill Walton was a great joy because he was in his own way a giant in his sport. But he managed to be a fan when he was in our midst. I loved the fact that he was humbled by the dramatic notion of what these guys accomplished.

Pez: Talk to us about the role that the Coors Classic played in making Boulder a bicycling mecca.

Aisner: It was just about the economic impact and the cultural and social impact of bringing all of these athletes into town in their team vehicles. Here were all of these pro-looking athletic souls that would be roaming around town every year a week or two prior to the Classic because of the fact that we were at a high altitude event, they felt like they needed to come here and train. We saw what type of effect it had on attracting other athletes to town. The benefits of the high altitude, the kind of town and openness, the lack of smoking and kind of liberal thinking and Boulder’s accommodation to bicycle riding. And the fact that the athletes were being heralded here instead of spit upon was something that was just a match made for athletes in this town. 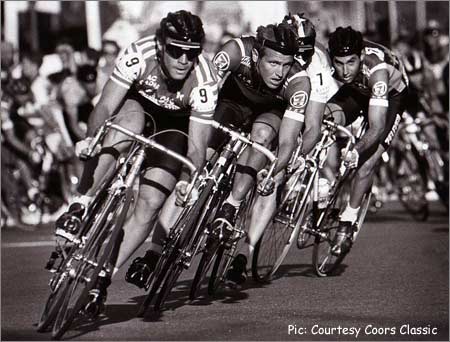 It must be the 80’s: Toe clips, hairnets, Oakley Factory Pilots – and Steve Bauer! (followed by future Lance coach Chris Carmichael and that-looks-like LeMond peaking over his shoulder?)

So, triathletes came here, runners came here and it became a mecca for this. We saw great names move to this village and the effect on this town was huge. Right now we are working on a monument at North Boulder Park to cycling and I think the town will be reminded of the impact that cycling has had on this community. We have more bike paths than any other city in the county other than Davis, California.

Pez: You have mentioned that Davis Phinney is your personal hero, friend and cohort. Tell us about Davis and what makes him a friend and hero to so many.

Aisner: I think that I was reserved about my feelings about Davis during the Coors Classic because I was the race promoter and I didn’t want to have a bias. I didn’t want anyone saying that I created courses for him. At the onset of the Coors Classic, I was just another race promoter and Davis came to watch the race in North Boulder Park and had his dreams as a child and grew into it. For every great event there is a relationship with its participants that helps make the appeal work. Davis was 100% content. Looking back at these DVD’s, I now realize with a fresh 25-year perspective the extraordinary amount of airtime he got during the course of this race. Whether he succeeded or not. If he won, they were all over him. If he didn’t, they were all over him. The reason why was because Davis made great television. He was fresh, he was good looking, and he had an extraordinary smile and charm. And the charm worked on television.

Alexi Grewal had a very similar thing going. His charm was in his bad boy appeal. The fact that he had an attitude as did Davis but in a different way. Alexi’s contributions to this race were tremendous. And so were Connie Carpenter’s when she was in her battles with Jeannie Longo. Good sports is good competition. All I could do was create the vehicle for these athletes to compete. 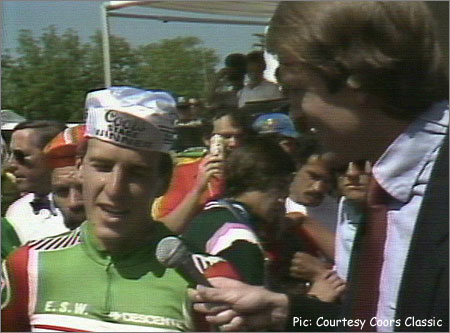 The always photogenic Phinney, getting the treatment from CBS’s John Tesh.

So, Davis was at the core of that. I went out of my way to find sprinters that could foil Davis. I loved Alan McCormack giving Davis a difficult time. I loved bringing over the Dutch and I would hear about an Italian sprinter and I would go out of my way to bring that person over here to give him trouble. I did the exact same thing with Connie. When she was dominating this race I went around the world in my search to find someone who could come over here and get her on the ropes, and raise her bar. That gave me great rewards when Carpenter, Davis and Grewal did rise to the occasion and they were able to maintain their ground as being the best at what they did.

Educating The Fans
Pez: For the past 22 years you have been announcing the USPRO Championships and other major races. I have read that your philosophy on announcing bicycle racing is to educate the fans. Tell us more about what you try to achieve while announcing a race?

Aisner: All too often I hear announcers speak above the heads of your average spectator. And I feel very strongly that at every turn we need to involve them, excite them in what is probably very repetitive. Our job as announcers is to engage the newcomer to the sport immediately into long term spectators. Not by just amusing them, but by getting them connected to why these athletes do what they do. Connecting them so that they have a vested interest in the sport in the future. I don’t want people to walk away from an event that I am announcing and say “they had a nice day.” I want them to walk away and say, “You have got to go to this thing with me next year, it is amazing.” That to me is the goal. 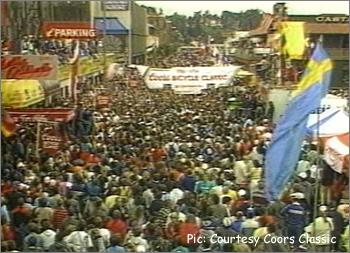 Race in San Francisco and get crabs! Can you believe the size of the scene at Fisherman’s Wharf?

Pez: How has Phinney’s Parkinson’s disease affected your relationship?

Aisner: I was sitting with Davis on his front porch one day and he was starting to tell me a little about things that were happening to his body that he did not understand. There was occasional numbness, there was some eye clarity problems, and I urged him to go get a brain scan immediately. And I went in and had private conversation with Connie … without trying to be too alarmist. He went through a battery of tests, and as a result of going in at that point learned that he had early onset Parkinson’s disease. And for me this has been a huge experience to see a dear friend go through this and wondering how he was going to go through this. At first I projected how a Davis Phinney might respond. And I was concerned that someone who had defined his life by the way he looked, his physical prowess and capabilities and his athleticism and vanity, (and I say that in a positive way) was going to be affected by a neurological disability.

David has just become a humble guy who is working on his foundation. It has given him direction at this point in his life to challenge another great feat. Like Lance did with his cancer. But cancer is beatable, in Davis’ case there are no examples of people turning around Parkinson’s disease. You can slow it, but it’s debilitating. And he has done this with such grace and extraordinary maturity, that I just continue to honor him and idolize the way he is conducting his life today. Including his efforts and work with the Davis Phinney Foundation. And I must say that there is an equally long friendship for his wife Connie Carpenter. She is one of the first cyclists I ever met in the sport in 1977. And we have been friends ever since then. And my admiration for her has catapulted as a result of her managing her life and her growth as an adult, but also Davis’s. So, the combination of Davis and Connie for me is just a real bright star.

Pez: We could go on talking about all the great memories from this great race for days – thanks so much for your time Michael!

Toolbox End of Season Review: Back to the Future