Nine gold medals at the Worlds for Team GB – wow! So, the rest of the World will be happy to compete for silvers at Beijing? Not if Denmark’s Michael Morkov has any say in the matter…

He took bronze in the Madison at Manchester, last month partnered with compatriot and former world scratch champion, Alex Rasmussen, and he’d just won a mountain stage of South Africa’s Giro del Capo. Michael didn’t make the Danish team pursuit squad that dipped below the magical four minute barrier to take silver behind the British squad; but he hopes to rectify that by the time Beijing is upon us. 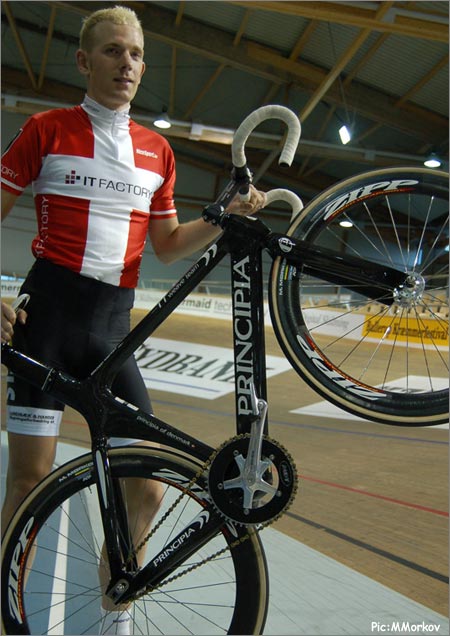 Pez: Are you and Alex happy with the bronze, Michael?
Michael: We made some mistakes, but it’s my first Worlds medal and I have to be pleased about that. We lead the race for a long time and we were beginning to think that maybe we can hold on for the win; so right after the race we were disappointed, but the next day we were both happy that we had taken the bronze.

Pez: Wiggins – impressive?
Michael: Very, we obviously knew that he was a great pursuit rider, but we had no idea that he was so good in the Madison. They tried six or seven times to get the lap and their last attack, when they launched the attack that got them the lap gain – he was just so incredibly strong. 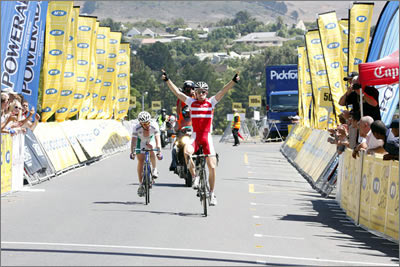 It’s not often you see a racer winning both on the track and in the mountains.

Pez: Risi & Marvulli disappointed?
Michael: I think that early in the race they were waiting to see what was going to happen and at half distance they made a huge attack; I think this took an awful lot out of them. In addition it was a tough race – all the teams in contention had to work hard.

Pez: You must have been disappointed not to make the team pursuit squad?
Michael: Of course, I’ve been on the squad since we were doing 4-20, so it’s disappointing not to be on the podium. I’ll be working hard through the summer to try and get my place back; Michael Faerke has made a big improvement over the last year, he was going better than me coming in to the Worlds and got my place.
I’ll be doing a lot of gym work to build muscle and power; I am the lightest of the five guys on the squad.

Pez: The Danish team has been transformed over the last year.
Michael: I think a lot of it’s just down to how we think now. I can remember when we thought it would be difficult to break the Danish record of 4-08, but now we think in terms of going well below four minutes. Our coach Heiko Salzwedel has been a very positive influence too. 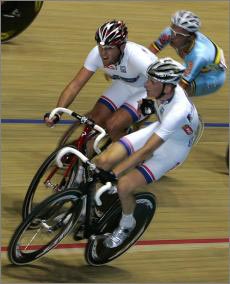 Pez: I’ve heard it said that Heiko is motivated by revenge to beat the GB team, because he worked briefly with them, but it didn’t work out?
Michael: I don’t think ‘revenge’ is the right word, but for sure, I think it would give him a great deal of satisfaction if his new, young team was to beat the GB team. He’s done good work with us, taking us from nowhere to the podium.

Pez: Can Denmark win in Beijing?
Michael: I think it’s worth remembering that going in to the last Olympics, GB were favourites for the team pursuit, but Australia won it. I think that Australia will be very dangerous again in Beijing, but we are on the way up and I think that gold is certainly possible.

Pez: A lot has been made of the GB ‘super bikes’ – how much advantage do you think they offer?
Michael: I think that they are all customized to suit each rider, whilst our Cervelos are standard sizes, but I think that’s the only advantage. I think the Cervelos are very good and the riders have worked with Heiko to get the best equipment, the Easton bars that we are riding, for example are the stiffest you can get and very light. We ride Campagnolo Ghibli wheels with Vittoria tubulars – that’s a very fast combination. I’m really pleased with my ‘bunch’ bike also – it’s a carbon Principia and rides perfectly.

Pez: Alex seems leaner this year?
Michael: Yes and he’s a lot more focused, he’s realized what we’re capable of – we’re now ranked one and two on the UCI Madison rankings. I’m very proud of that, to be ranked the top Madison rider in the world, Alex and I can both say now; ‘I have the best partner in the world!’ 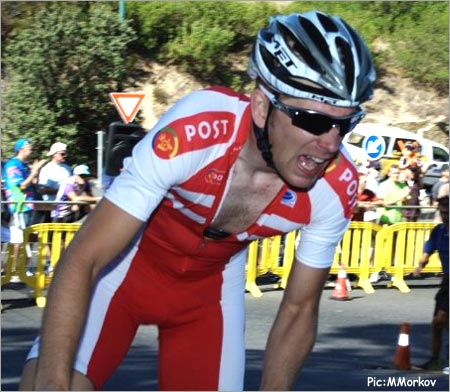 Pez: Last year, you were second in the under 23 Tour of Flanders – do you have conflicts within you about whether to go to the road or track?
Michael: I also won a stage in the Giro del Capo, not long before the Worlds this year – that was my first UCI road win, so I was very pleased with that. I would like eventually to get a contract with a road team where I have good support, but also to have a winter track career – like Iljo Keisse has at Topsport Vlaanderen.
My current team, GLS are happy to let me ride a road and track programme, they are very pleased to have Worlds medals being won by their riders, and maybe Olympic ones too.

Pez: What are your goals for Beijing?
Michael: I always try to be realistic, but I think we can aim for medals in the team pursuit and Madison and there is the possibility that we can go all the way. However, any medal in the Olympics would be good, just to be there and being involved in the Olympic Spirit.

With thanks to Michael for his time – we wish Michael, Alex and Team Denmark every success in Beijing.