Team Navigators’ Phil Zajicek has been enjoying fine form of late… including a 4th overall at the Tour of Britain. Not only can he climb in smog filled environments such as the Tour of QingHai Lake in China, which he won in 2004, and TT like a madman, but he also bakes one hell of a pie. We talked to Phil as he readied for his trip to England…

Pez: Since PEZ-Worldwide is headquartered in Vancouver, I’ll start by asking how you liked racing the Tour de Gastown in PEZ’s neck of the woods?

PZ: Gastown was great, my time in Vancouver overall was awesome. We were fortunate enough to be at the Wedgewood Hotel downtown for 11 days. Vancouver is now my favorite major North American City. Gastown itself was a badass crit, nice tight course with huge crowds and an aggressive field.

That’s teamwork: The Navigators boys play pin the number on the rider at the Glasgow GP.

Pez Dissed?
Pez: Top cheese Richard was expecting a call for the morning ride with the Navigators Insurance Cycling Team, what happened?

PZ: Ah, I called Richard a few times! His cell phone mailbox was unfortunately full so we never were able to coordinate. He missed a nice ride up Seymour; I was looking forward to making him suffer!

[Pez Note: Remind myself to only give out my ‘real’ cell number to the pros…]

Pez: Your win at the Tour of QingHai Lake in China was a breakthrough moment in 2004. How did that win affect you as a rider afterwards?

PZ: Well, initially after the race I was on cloud 9. I had proven to myself that it was possible to win large races without drugs, with hard work and excellent teamwork. After my whole debacle with USADA I really reevaluated my involvement in the sport and came to the conclusion that I wanted to continue racing professionally and to pursue it to its highest levels. Now I am just enjoying racing my bicycle and love getting on the bike every day.

Pez: Walk us through your season so far since you checked in last for us in Australia and as you prepare for the Tour of Britain.

PZ: A bit up and down since TDU this January! The form was starting to come around in Europe when I got sick, never was able to find my legs again after a course of antibiotics. Just before Philly I did a small race in Boulder and had a bad crash where I broke my heel. I was off the bike for a month and have been rebuilding since then. Right now I’m training hard with the end of the season races in mind.

Pez: Navigators is U.S. based but with a real international flavor. Does having teammates such as Davidenko, Nothstein, Baldwin, and Siro Camponogara fulfill your Euro aspirations?

PZ: It is great having teammates from literally all over the world, we are also fortunate enough to do a lot of international racing. I would like to race full time in Europe when the time is right, we’ll see what happens in the future. 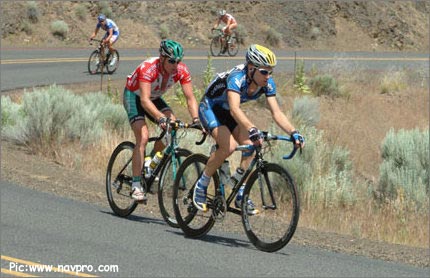 Phil puts goes on the attack at the Cascade Classic.

Pez: What got you started racing bicycles?

PZ: I started riding in high school. I was running and playing a lot of soccer when I got a bicycle for a birthday present. I started to ride a bit and just fell in love with it. After winning my first race I was totally hooked.

Pez: How would you describe yourself as a rider?

PZ: I’d say that I am an all around rider, I think that in the US you have to be a complete rider. We don’t have many mountainous races here, mostly criteriums and short time trials. Personally I prefer difficult stage races and time trials.

Pez: Are you familiar with the Daily Distractions and if so do you have any favorites?

PZ: I think that my favorite would have to be my teammate Jeff Louder’s wife, Soorya! She joined us at the Tour of GA this year and is a wonderful girl.

Pez: If you weren’t a professional cyclist then what would you be doing?

PZ: I’d probably be either still in school, most likely pursuing a degree in exercise science. Either that or culinary school.

Pez: What do you do in the off-season to prepare for the upcoming season?

PZ: I do quite a bit of hiking in the mountains around Tucson, I also rock climb as much as possible. I’m planning on learning to surf this fall.

Pez: Thanks for chatting with us and we hope to hear from you soon.
I’d like to leave by asking you to respond with the first thing that comes to mind.

Pets: PZ – No pets for the traveling athlete, I’ll have a little pug someday soon though. (Ed. This reporter does some work with Pug rescue and will gladly assist when the time is right. Never buy an animal from a pet store – not that Phil would though.)

Family: PZ- My family is very important to me. They’ve been incredibly supportive from day one. I ride with my father a few times a week when I’m home.

Sudafed: PZ- This still makes me pretty angry. Sudafed is legal but not its metabolite-norpseudoephedrine. Someone just tested positive for this in the Tour de France. It is going to be interesting to see how the Societe Tour de France deals with this. I hope WADA changes the rules soon, this is simply ridiculous.

Armstrong: PZ-Legend! I had the opportunity to spend some time with him this spring in Girona. I’ve got a lot of respect for what he’s done. I hope that his reputation doesn’t’ get ruined post-career. These latest allegations seem serious.

Now go get them at the Tour of Britain and don’t forget to check in with us at Pez. More information can be found on Phil at his website; PhilZajicek.com or on the Navigators Insurance Cycling Team site at www.navpro.com.