As journalists we’re supposed to present a balanced view of our sport, but sometimes it’s hard, especially considering the events surrounding this year’s Tour de France. Today we went a long way to try and get a balanced view – all the way to Uganda to talk to a man who can always be relied upon to give a thoughtful perspective – Paul Sherwen.

Paul has been professional champion of Britain, he’s been a team manager, a PR man, has interests in a gold mine and is half of the best-known race commentary team in the business. He’s fluent in Swahili too, but fortunately he used English to talk to Pez.

Pez: Thanks for taking time-out to talk to us Paul, let’s get right to it –
What’s your take on the problems that dogged this year’s Tour?”

Paul: I’ve always been a person who tries to look for the positive in any situation, no matter how bad, and I think the teams took a very brave decision in not allowing the riders involved in Operacion Puerto to start.

Remember that it was the teams and not any governing body who said they weren’t riding. A team like T-Mobile has made a huge investment in Jan Ullrich and for them to tell him to go home sends a powerful message – even the suspicion of drugs will not be tolerated.

You also have to remember that Ulrich and Basso were only under suspicion, they have not actually been found guilty of anything – it took a lot of guts to exclude them. 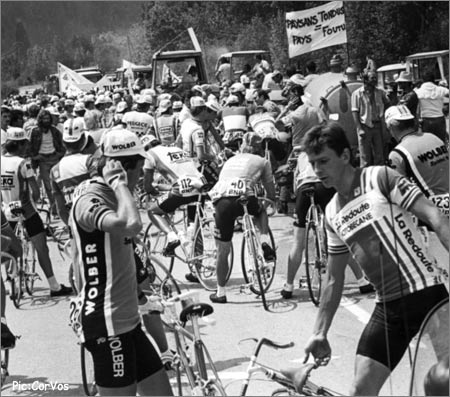 Paul Sherwen has seen decades of controversy in cycling, like this rider protest in the Tour sometime in the late 70’s. (That’s Paul front right)

Pez: What is your opinion on the Floyd affair?

Paul: For the moment where Floyd is concerned I air on the side of caution and subscribe to the belief that he may be the victim of an error, either physiological or analytical. As an ex-rider I always tend to give the rider the benefit of the doubt. That may be simplistic but I do believe that everyone should be innocent until completely proven guilty.

That said he has a tough battle ahead of him when you consider the history of his team in doping practices, that will surely weigh against him in his battle. Even if he can prove his innocence can he ever convince everyone out there that he didn’t get off on a technicality!

I am trying to learn about the ratio and levels of E/T, probably as Floyd is, and from what I am finding out right now it is not cut and dry. However if they have found exogenous T in his system it will be a little harder to prove that he didn’t do it.

Deep down I want to believe that he didn’t because it was actually a great Tour.

Pez: Do you think drugs are less of a problem now than they were back when you raced on the continent in the 80’s?

Paul: I like to think that they are less of a problem now; WADA, the UCI and the organizers of the big tours are all battling hard. Drugs will always exist, cycling seems to have more than it’s fair share of problems because it tries to do something about the problem whilst many sports brush it under the carpet.

Pez: How much of a problem was it in the 80’s with the teams you rode for?

Paul: I wasn’t aware at all, they were never visible. It’s always rumour and innuendo, spoken in hushed tones in corridors; ‘did you see the way so-and-so was going today?’

The thing is that’s it’s an easy way to accept defeat, instead of accepting that the other guy has more discipline and dedication it’s easy to say that the he’s taking something.’

Pez: Did you ever buy-in the ‘two-speed’ peloton we heard about in the 90’s?

Paul: No, I didn’t, but I was probably wrong. When I was in charge of PR at Motorola I used to hear the riders saying; ‘Did you see those Italians climb – they weren’t even breathing hard.’ I used to say; ‘you’re all soft, you need to train harder,’ or; ‘you’re not taking care of yourself,’ But when I look back it was the start of the EPO culture, so there probably were two different levels within the peloton. The fact is that you only know what’s happening in your team, each team is like a clan that travels around Europe – an insular little world.’

Pez: Do you think the authorities are doing enough to combat the problem?

Paul: I think they are doing about as much as they can but they have to be wary of the legal aspect. The UCI can’t tap phone lines or launch video-surveillance operations – it’s only the police that have the serious powers necessary. The rumour is that Tyler Hamilton has spent $2 million on his legal case – imagine if the UCI had half a dozen cases in progress like that.

Operacion Puerto-type situations are what are required to get to the root of it. I also believe that it’s more of an individual thing now, not like the Festina situation where the team was at the centre of the organized drug-taking.

The sponsors have much more involvement now; T-Mobile for example, are involved in the day-to-day running of the squad. The amount of money that big sponsors spend on a Pro Tour team they don’t want any risk of drugs scandals. In the Festina days the sponsors were kept at arms length by the team management.

Pez: How valid is the argument that riders can’t take simple medical preparations which are available to the public?

Paul: I don’t think that it is valid because there is the certification procedure available within the UCI which enables riders to take medicines for any condition they might have. However, I suppose even that is open to abuse, could a rider feign an illness in order to get to use a preparation which is beneficial to him?

A thing that must be remembered is that the riders are doing a job of work, if a lorry driver doses-up on coffee to drive across Europe then nobody bats an eyelid, if a cyclist does the same he’ll fail a test.

Pez: What’s your opinion on the Vuelta organizers excluding riders who have been named in Operacion Puerto?

Paul: It’s sad, they are acting on a presumption of guilt, but it’s a war against drugs and there will be casualties. It’s a complex situation which is hard to simplify; even getting access to the test results, for example is difficult.
Landis has said that he has learned more about his position from the media than from the authorities.

Pez: What would Paul Sherwen like to see done about the problem?

Paul: A person for whom I have great respect is the riders representative, Jens Voigt (CSC) and his attitude is that there should be more and more tests. Not just to catch wrong-doers, but to establish patterns of what a rider’s normal values are. Along the lines of the French tests; so that if something is different or has been tampered-with then there are a whole series of reference points to compare with.

The tests are getting better all the time too, it’s good to see that they can now establish if a rider has had his own blood injected back into himself for example.

Pez: The Ј64,000 dollar question – would the same guys be winning if no one was taking anything?

Paul: I’m pretty sure they would, it’s a clichй but you cannot make a race horse out of a donkey. I think that it should be remembered that Landis’ ride wasn’t super-human, major tactical errors were made behind him. T-Mobile and CSC played poker with Caisse D’Epargne, trying to force them to chase, meanwhile Landis was going further up the road.

His performance was very good, but not to an unbelievably-so, the mistakes behind were as much the reason for his performance as anything else.

Pez: Once again – thanks for taking time to talk with us and the PEZ Readership!