In Part Two of our PEZ-Clusive interview, Paul Sherwen gives us his take on the Top Ride, Rider, and Team of the Year, thoughts on George Hincapie, and some fun stories from back in the day when Sherwen raced on the European pro circuit.

PEZ: What would you say was the Top Ride of the Year?

PS: Lance’s ride in the opening TT at the Tour was pretty impressive. I don’t think there was just one top ride though – Tom Boonen winning the Worlds was equally as impressive. Alessandro Petacchi winning Milan-San Remo as well. 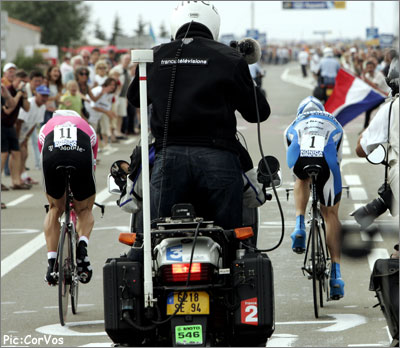 PEZ: Top Rider of the Year?

PS: Hmmm, for me, Tom Boonen. Because of the way he races, the races he won, but again, you can’t forget Lance for winning the Tour for a seventh time. 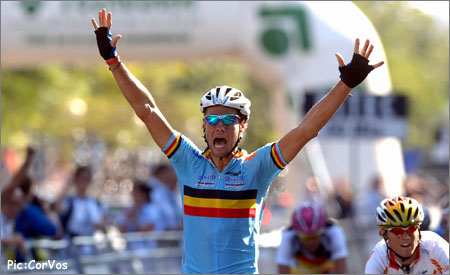 Bobby Julich had the best season of his whole career as far as I’m concerned. He seems to really be enjoying cycling. What’s more important, being 19th in the Tour or winning 5-6 races in a year? For me, it’s winning, not getting a mediocre finish at the Tour. It took him awhile to learn, but when he learned it, he has been very successful. It has been a problem for many American riders in the past – centering everything on the Tour, sacrificing everything else, and then getting 16th or 19th. 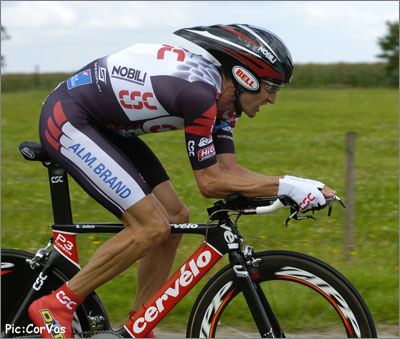 PEZ: Top Team of the Year?

PS: For me, probably Quick.Step. Just because of the broad spectrum of the team – Boonen, Bettini, Rogers [two World Champions on one team ain’t too shabby]. You have to put Discovery pretty close to the top as well, for winning two of the three Grand Tours.

PEZ: What do you think of George Hincapie’s protected status for the 2006 Tour de France?

PS: At the Tour de France over the past seven years, he hasn’t thought about anyone else but Lance Armstrong – that’s a full-fledged Pro mentality. He proved it this year that he can be a Top 10 finisher, we can’t say right now though for 2006. It depends on what Discovery decides on his program. If they decide for him to be the Flanders and Roubaix top man, eh…he can’t be in absolute top form for the Tour. Being capable of a Top 10 at the Tour is one thing, actually racing as a leader is different, the mentality is different than riding alongside Lance Armstrong for as long as possible. Doing it for yourself is a completely different effort. 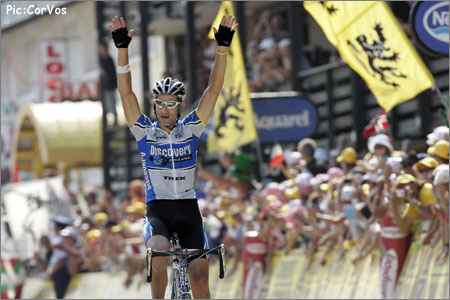 PEZ: If you were George Hincapie’s director and were planning for 2006, what would you do?

PS: I would tell him to go all out for Paris-Roubaix or all out for Flanders, one day you really deserve one of those two Classics. I don’t have access to George’s data, he can fly up mountains for sure. I know he can fly at Flanders though, wouldn’t it be better to realize his life-long dream of winning Flanders or Roubaix?

PEZ: Did you see evidence of EPO use in the peloton when you worked for Motorola?

PS:That was in the 90’s when EPO was really coming to the highest level, and I had just come into the Motorola team; it was dominated by American riders at the time. The riders kept coming to me saying, the Italians, they’re so fast, the Italians are riding uphill and dropping me without even breathing! I couldn’t believe that the difference was a pharmaceutical difference. I believed they weren’t dedicated, that they weren’t working hard enough and training hard enough, and I told them. I had raced alongside Greg LeMond and had seen what he could do – he wasn’t the most hygienic eater in the world – he’d down a plate of Dunkin Donuts and wash it down with a bottle of Coke. I didn’t think much of the American cyclist’s work ethic when I came to Motorola. I found out later though that my analysis was completely wrong – they were working very hard, and the difference had nothing to do with hard work or dedication. 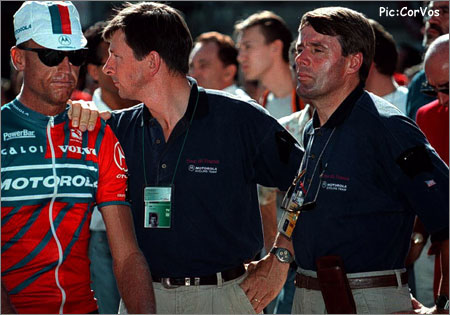 PEZ: What did you do with Motorola?

PS: I was Director of Public Relations – basically I was in charge for PR, looking after the guys at press conferences, as well as encouraging different countries to take an interest in cycling everywhere Motorola raced in the world. Motorola is everywhere, even here in Uganda. I think because of my knowledge and my history in the sport, I was very much appreciated for what I did, especially by Jim Ochowicz. I did a little bit more than PR. 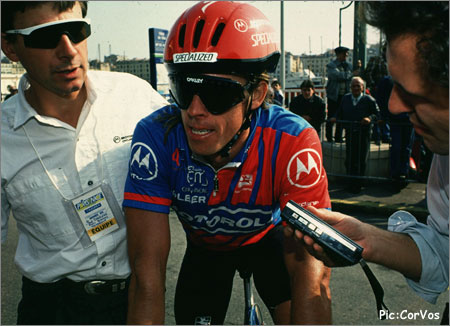 PEZ: I hate to ask mundane questions, but… how do you think the Tour de France will change without Lance Armstrong?

PS: Somebody asked me the same thing today. Lance brought the Tour de France to a much higher level. He’s the Michael Jordan, the Tiger Woods, of the recent era. The Tour has been around since 1903, but recently a lot of people have begun to realize that the Tour is an incredible event. A lot of people will continue to want to see it. It’ll always be hard, long, difficult, and fast, and the french countryside is always beautiful. There will be some people who are there only to watch Ali or Woods or Jordan, and they’ll stop watching now that Lance is gone, but the show will go on. There will be a story everyday. It’s never boring to me. I understand that even early on in the Tour, the stages are laying the foundations of a good story. You need the first 10 Chapters in a book to set up the important part. 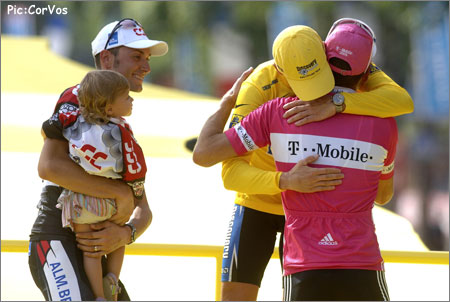 PEZ: What do you think about Petacchi’s recent comments about the Giro route being against a sprinter like him?

PS: The Giro is taking something for everybody, by including more middle stages, the Grand Tours are thinking of giving something to the Protagonists. Petacchi has won 19 Giro stages in 3 years. When you look at the terrain, when the routes come out, they might look a certain way, but on the ground, the riders make the race. The athletes make the race difficult. If it’s too hard they go slow, if it’s too easy they go fast. 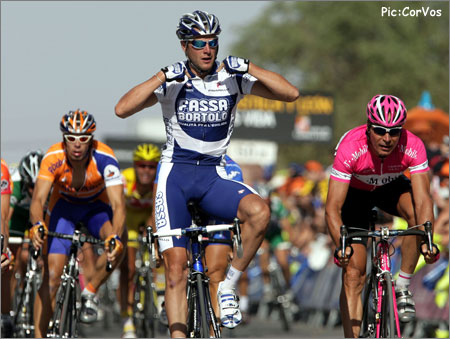 PEZ: As a rider, what were your first impressions of the mountains in the Tour de France?

PS: They were the worst nightmare for a guy who couldn’t go uphill. I had never seen anything like them, I had never seen anything as majestic as they were. You want me to ride up that thing? This is just ridiculous! It wasn’t just riding up one, it was three, four, even five in a day, sorry boss, same thing the next day! Maybe going back with today’s training, it might have been different. Either way though, if you can’t go uphill, it’s a bloody nightmare. There are guys who really want to finish the Tour but they don’t know if they can even finish the stage. Petacchi probably feels the same. And by the way, don’t let Bob Roll tell you he was a climber, I reckon he would have been with me back in the bloody bus. 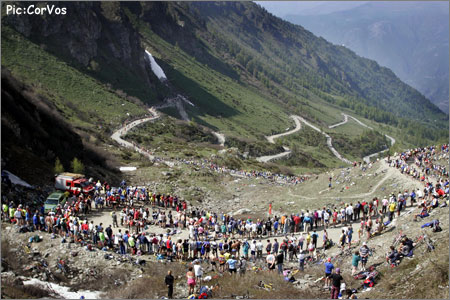 PEZ: You mentioned that the Spring Classics were some of your favorite races as a rider…

PS: They were mad. Everything is so basic, it’s survival, just like here in Africa, maybe not in Kampala, but in the bush. You have to know how to survive. You have to fix your car yourself, there’s no AAA out in the bush, if you can’t fix your car, you’ll sit there for days; you have to have a certain knowledge of survival. Roubaix and Flanders are about survival. It’s ok to be a team man, up to a certain point, with 60-80 km to go there’s no teamwork, you’ve got to do it yourself. You’ve got to ride that road on your own – cobbles, bergs, everything. When Boonen won it last year, the race was split to bloody pieces – there were 20-30 riders left with 90 km remaining, no teammates really. Those are men’s races, they’re like climbing Everest solo. Everybody falls off, everybody crashes, everybody has a story. It’s who’s there at the finish, who survived. 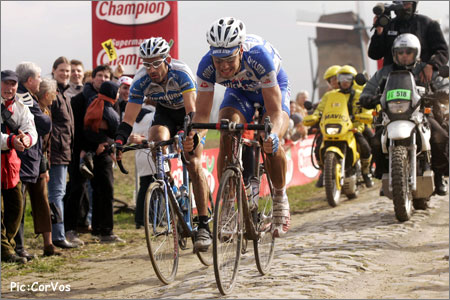 PEZ: What do you think about your racing career looking back? Any regrets?

PS: It’s easy to have regrets. I couldn’t train in the areas I wanted to train. I was obliged to train where my team was – northern France. Northern France is completely flat. I do blieve if I was able to race and train in a different part of the world. I don’t really have any regrets though, I did what i did to the max. I would have liked to race with a more scientific approach though. I wanted someone to give me a finite training program, they were very much empirical at the time. 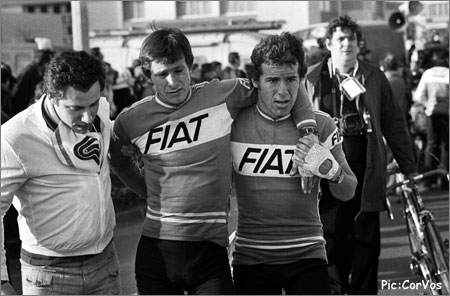 PEZ: What was your training like at the time?

PS: We trained 6-8 hours a day, basically, the fine tuning was done through racing, high-end was accomplished in racing.

With that, we called it a day, time was running long, and there appeared to be no end in sight for my constant flow of questions – so it was decided to save up for the next time!