At the Saunier Duval training camp in Murcia, we talked to Dr. Inigo San Millan of the medical team. He provided an interesting insight into what it means to be a doctor for a ProTour team today as well as revealing some of his thoughts on the future of cycling.

Inigo is one of four doctors working with the team and whilst he may be touted as “chief” of the medical staff, Inigo was keen to dispel this myth. “It’s a big team with a lot of riders and 250 days of competition. We are a team of four and this is necessary to divide the work. I’m more in charge of coordinating. I was traveling 120 to 140 days a year and I hope to be able to coordinate more of the work from home this season. It’s much easier to work with riders individually from home. At races there is too much going on and it’s not possible.” 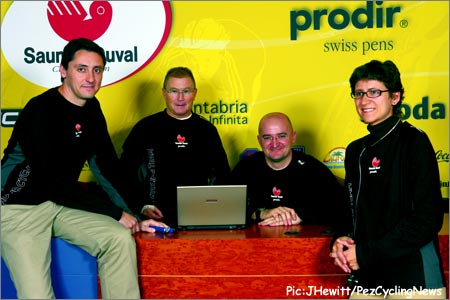 The team has a staff of 4 medical personel to share the duties of keeping everyone healthy and properly trained.

But what does it mean to develop a training programme for a rider? “We work
in the most scientific way possible. We work with SRM systems and physiological tests to develop individual training programmes for the riders. We use the tests to see how the riders are absorbing the training load and to make sure they are not over trained. That [over training] happens on a lot of teams. Riders arrive at the races already fatigued. There are so many races in the calendar, for the last races of the season, many riders arrive just messed up.”

There are a number of parameters used to discern ‘over training’ and I was interested to find out what the Saunier Duval team was analysing. “We test for free radicals to determine the damage that is occurring. Free radicals cause a lot of damage. The life span of a red blood cell in a regular person is about 120 days. In a cyclist at this level it may only be 70-80. They destroy a lot more red cells than a regular person. Many cyclists diet too much, they have hypo caloric diets. It’s better that a rider has a better diet. I would prefer a rider to be 1 kg over weight with strength than underweight. Hypo caloric diets are fine during winter but during the middle of the season if your body fat percentage is ideal you need to eat a lot! Many cyclist are buying into the marketing of these new diets: 30-40-40, high protein, low carbohydrate and they are turning up to training camps with them. These might be fine for a regular person but the demands on a professional cyclists are much higher. This is clear from muscle biopsies on glycogen storage and in the battlefield. Riders with low carbohydrate diets show up at races empty.”’’

David Millar gets wired and recorded in the name of going faster.

“We try to organize training in the most scientific way possible. Lactate is the most important parameter for us. VO2 max. is significant, but it is more an indicator of cardiorespiratory adaptation. At this level, most riders will have developed this to its maximum capacity. Whereas lactate tells us more about what is going on inside the muscle cell, how efficient a rider is and provides a better parameter to prescribe appropriate training.” However, there are riders from the old school who have difficulty adapting to the ‘new cycling’. That’s why it is good to have a manager like Mauro who is committed to development with the new mentality, the testing, the wind tunnel… We are a very international team which is good because we have lots of new blood”.

It is clear that the past few years have seen a shift in the cycling super powers. With the “old” European dominance being superseded by nations such as Australia, the US and Nordic countries, a sentiment shared by Inigo. What did he think were the causes of this shift? “Here in the old Europe, there are not many top riders any more. In Italy there are thousands and thousands of riders so there will always be a few who rise to the top but the bottom has fallen out in some countries such as France. Spain hasn’t reached the bottom yet, but in a few years…”

So in this new age of cycling, I was eager to here his opinion concerning how much success is determined by training effectively, scientifically, as opposed to pure genetic gifting. “The more scientific the training and the preparation is, the more you can get out of cycling.” he noted succinctly. “The gifting has to be there but over the years I have seen many, many cyclists who had the genetics but were only getting 35% of their potential. With scientific training, it is possible for riders to get nearly 100% of there potential. This is what is happening in countries like Australia where they don’t have so many riders but the riders they do have are reaching their maximum potential because of the work they are doing with young riders.”

Saunier Duval is clearly committed to testing and developing their riders but do team doctors still have a traditional role in a sense that the general public may perceive? “Many conditions develop” he said “such as allergies. Riders have many problems related to allergies. In normal life it would not be a problem but when you are using your pulmonary capacity to the maximum, a small restriction caused by an allergy could severely limit your performance. Then of course there are the usual problems, broken clavicles (collar bone), tendonitis etc.” 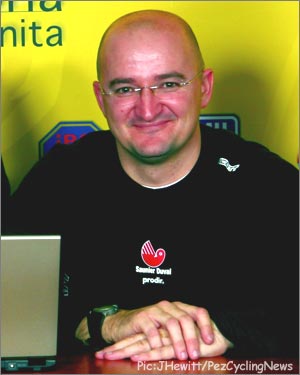 The ProTour has also increased the number of days racing, but how has this affected the demands on the riders, I asked? “The level is higher, the riders are more prepared and there is a new wave of cyclists coming up. I was a cyclist myself and I have seen this evolution, how this cycling has changed. Riders now are so much more educated, they know how to use power, how to work with heart rate and also there are increased anti-doping measurements, that’s really good. The level is higher now but it’s more pure. It’s very hard to cheat in cycling now. Some people might be adventurous to say it but cycling is one of the cleanest sports now. Cycling is one of the only sports that implicates the whole spectrum of doping measures. Some sports only use the basic tests”.

So if cycling is so clean, why does the sport seem to have a bad reputation and why are positive tests relatively common? Inigo replied with an interesting analogy. “If you always have the police at your house, your neighbours are going to think something is going on. It’s like this, if you were to test drivers for
alcohol at every traffic light in a particular city there would be many drivers caught. That city would have the highest index of drink drivers in the world. Other cities may only test at particular times or not at all. Now riders have no choice, they have to train better and eat better, they can not resort to prohibted means”.

So to finish off, I asked Inigo who were his top tips for the future. He pointed me to Arkaitz Duran, the team’s youngest rider and not yet 20 years old. “He went pretty much from junior to professional.” said Inigo. “He’s one for the future, a super hard worker and will do everything you teach him to. Riders like him may only come along every 10 years, he’s very gifted. He could go to the very top of the sport.”

I thanked Inigo for his valuable time and left him to continue the physiological testing which was absorbing his days.