Maybe the youngest US pro riding with a ProTour team – Saul Raisin has made more than his share of miraculous comebacks from horrific crashes, and scored some impressive results to boot. In this PEZ-Clusive interview – we get a glimpse of what makes this guy go…

Meet Saul Raisin, winner of the Best Young Rider’s Jersey at the Dodge Tour of Georgia in 2003 with the Ofoto-Lombardi Professional Cycling Team. April 22, 2005 was proclaimed “Saul Raisin Day” when this Dalton, GA hometown boy returned for the 2005 edition of the Dodge Tour of Georgia. Racing in the green and white colors of French team Credit Agricole, Raisin took 13th in the 2005 edition. After a period of recovery following a crash in the Tour of Dunkirk, Raisin is back and fighting it out along side the likes of Julich, Leipheimer, Horner, and the many other strong North Americans in Europe. At age 22 he certainly has time on his side. Will he be the next LeMond or Armstrong, only time will tell… 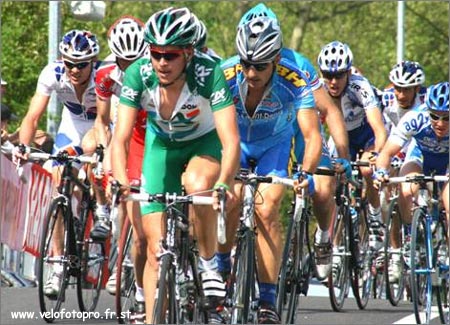 Saul leads the bunch in Europe.

PEZ: How did you get into racing and what was your progression in the US – What were your biggest results/proudest moments before heading to Europe?

Saul: I have always been around bikes. My family owned a bike shop before I was born and we would always ride them on vacation. I joined a mountain local bike club my Dad was riding with when I was 12. I fell in love with riding and began to train and try to improve. I did my fist race by 13 and was last – a slow progression for me. I was short and fat… it was not until I
was 16-17 until I won races and improved. I did the world championships in Portugal, and won Fitchburg as a junior. I made it on the USA u23 team.

My first year espoir was horrible. I crashed 4 times, and 3 broken collarbones… and I was way too skinny. I got very sick and my season was a disaster. I still managed a top ten in the time trial in the U23 Nationals and earned a trip back to Europe the next year. In my second year espoir I earned a spot on Ofoto which was a huge beak for me. I got to do all the big races in the USA and had a great Tour de Georgia -19th overall and the Best Young Rider. Right after I flew to Europe with the U23 team. I did awesome and my best result was 3rd over Rond d’Izard a big Espoir World Cup. Great performance in Europe got me the contract with the Credit Agricole Espoir team.

PEZ: How did you hook up with Credit Agricole? What made it happen.

Saul: I had great performances in the Espoir world cups. They noticed me and were interested. Patrick McCarty signed for Postal and I took his spot on the Credit Agricole Espoir team (they were interested in us both). I was offered the contract and that same day I crashed and almost died. The Team Manager of the espoir team saved my life. I crashed head-on into a cement post. A racer in front of me rode into a barrier and I plowed straight over the barrier into the post. I was knocked out and Lionel was the first person to the scene and cleared my airway so I could breathe. I lost teeth, and my face was destroyed. You can see pictures on my web site. I was home 2.5 weeks and next thing I knew I was back in Europe racing. I did a few races… I signed the contract 3 weeks later and I did the world championships in Canada.

PEZ: Walk the readers through the moto crash at Dunkirk? What happened, did the driver apologize and have you seen him since?

Saul: The Peloton had just slowed from a hour of hard racing. I rode up on the left moving up through a small gap. I was almost to the front when I slowed down and felt something tap me from behind. Then like an ejector seat. What ever was behind me accelerate and rammed me from behind. I flew over the bar and did a flip landing on side. I knew instantly something was wrong
I could move but not lift my left leg and I could feel my collarbone broken. So I just layed there hurting but not in extreme pain. The race doctor came right over and ask me if I was ok. I said “no” I broke something in my leg” I did not know. He stuck his hand under my hip and said “no it is ok get up” I yelled at him “don’t touch me” because when he suck his hand under my hip the pain was horrible. But he did not listen. He grabbed my hand and tried to lift me. With that my hip made a huge cracking noise and I screamed like a little girl. I have never felt pain like that. “It of course scared the doctor” so next thing I knew I was off to the hospital.

It felt like to me that I had ripped my leg out of socket. It hurt so bad. After he moved me I could not stand any movement or anything. I could not move, lift my head or anything. To make a long story short I found out I broke my hip, collarbone and some ribs. I was in the hospital in north of France for 4 days. Flew on a stretcher to Nice, then ambulance to the hospital in my town of Menton. There I was for another 4-5 days. I was hurt really bad. I could not get out of bed for 4 days. And I hobbled with a crutch until after a week. I went to my friend’s house in Italy when I got out.. He helped me get around and was very nice. I was there for 4 days, and 3 days after that I was riding my bike. Very Dangerous, because if I would have fallen I would have been in trouble. I did a week of riding. One week of training a few days rest and I was off to Tour de Suisse. I was 37thoverall in Suisse. Not bad considering the doctor said I was not to touch my bike for a month and a half. 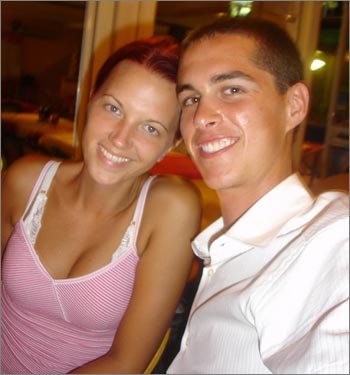 Saul and his “friend” Elvira.

PEZ: How would you compare the Dodge Tour of Georgia to the races you’ve done in Europe?

Saul: There is more competition in European races. In a ProTour race for example, 20 of the best teams and riders in the world are fighting to win. This make the racing a lot faster and if you take into consideration the typically narrow roads and those in poor condition, cross winds, and mountains it makes a whole new race. Georgia is getting harder than in past years. Look at this year where six Pro Tour teams were competing. This higher level of competition makes for an awesome race. I hope TDG grows each year,

PEZ: That motorcycle unfortunately crashed you out at the Four Days of Dunkirk In May. How are you feeling now and what are your plans for the rest of the season?

Saul: I am feeling good. I bounced back extremely fast from my crash, and have already done 28 days of racing since then. I am looking forward to the end of the season, I hope to try and get in a few more results and most of all stay healthy. Even with the crash I have had a good season. I am just glad to still be racing and living. 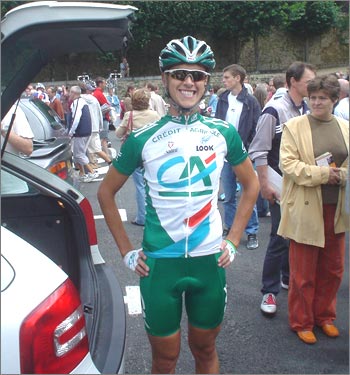 Nothing breaks down the language barrier like a big smile.

PEZ: Is it difficult being a young American on a big time French team? How do you cope, how’s the food and language situation for you and has anyone taken you under their wing? Does it compare to your time spent on Ofoto?

Saul: Overall it has not been difficult for me. Last year was hard since it was my first year living in Europe. But now I have made good friends and adapted well. I hold my own with the language and have no problems. I miss home every now and then but my family comes over to visit a few times a year. Now I am becoming so Euro it scares me sometimes. Some of the older guys on the team and mangers help me out a lot. Also I train with a few of the older pro riders in the area and I have some good friends near by.

PEZ: Jim Lehman of Carmichael Training Systems coaches you and perhaps this question should go to him, but how is your training coordinated with the team and CTS?

Saul: Yes, we do take everything into consideration. I talk to Jim a few times a week and let him know how I am doing. We talk about my racing program, how I feel, and what I need to do to prepare for the race. Things have been crazy here lately with my crash though. Training has been a little weird. My whole season was flipped up side down and I am doing races I normally would not do. Most of last month’s schedule has consisted of racing followed by rest. In addition to Jim’s knowledge and professionalism as a coach, he is a great guy and a good friend. If I have a problem he listens 24/7 and gets me through any and all situations. 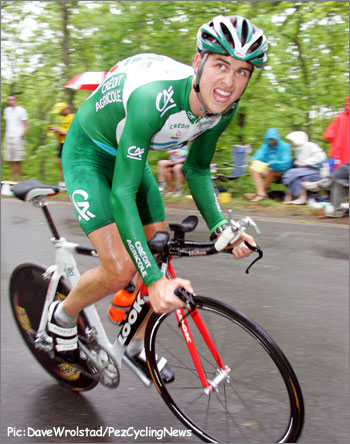 PEZ: What has the off-season traditionally meant for you and do you expect it to be different this year now that you’re on Credit Agricole?

Saul: All of the last couple of years has been different. Normally I like to ride for fun in the off-season. But this year I had Tour de Langkawi in January so I started training fairly early. This year will be the hardest year of racing I have ever had. I think I will have well over 80 days when it is all over. I still need to talk to my team about what’s in store for next season and Jim about what he thinks is the best.

PEZ: What do you do when you’re not racing?

Saul: I go to the Beach, Coffee Shops, Draw, Read, Out to eat, and hang out with friends. When I am not racing I like to just take it easy.

PEZ: What are you currently listening to on your ipod?

PEZ: Do you have a favorite Daily Distraction? Mine is Elisa Basso by far – at least until my wife gets posted!

Saul: All of them are nice. Maybe I can get a kiss from one on the podium in the future.

Saul: A stage in a grand tour, any stage in any tour.

Saul: I’d like to reach the podium in the Tour de France or at the Olympics.

PEZ: Saul, thanks for taking the time to chat with Pez Cycling News. If you could describe yourself in one word, what would it be?

PEZ: How would you complete the following sentence: I’m a professional cyclist because:

Thanks Saul and Pez looks forward to following your progress for
the next several years. More information on Saul is available at
www.saulraisin.com.