Some of the neatest, lightest bikes in the pro peloton are made by Swiss-based Scott; bike suppliers and second sponsors to the Saunier Duval ProTour team. Scott’s vice president, Pascal Ducrot took time to talk carbon with PEZ at the January Saunier Duval training camp in Granada.

Pascal was a pro for two years with professional team Toyo Francke before a serious crash in the finale of the 1990 Het Volk ended his career; so, when you talk to this guy, you’re not talking to a ‘suit!’

The team rides the Addict, the successor to the highly-respected CR1 design; the overall geometry was tweaked and weight reduced to give the Addict a more ’pure-race’ feel than the CR1. 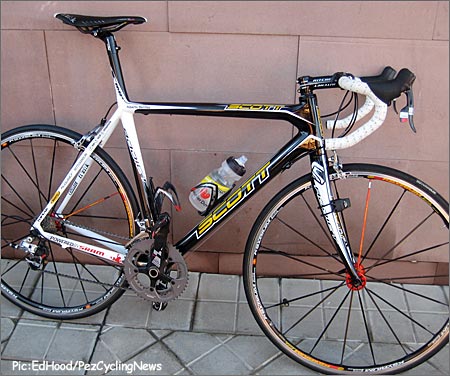 PEZ: What’s new on the Addict for 2008, Pascal?
Pascal: The main thing is the integrated seat post; apart from that it is the same frame [as 2007] but the ISP saves 40 grams over the conventional seat post model.

PEZ: Some say that an ISP can make for a harsher ride?
Pascal: Our feeling is that it gives the rider a better sensibility of the road and of course, it’s much more rigid. (Saunier riders back-up Pascal’s comments and say that comfort isn’t affected.) 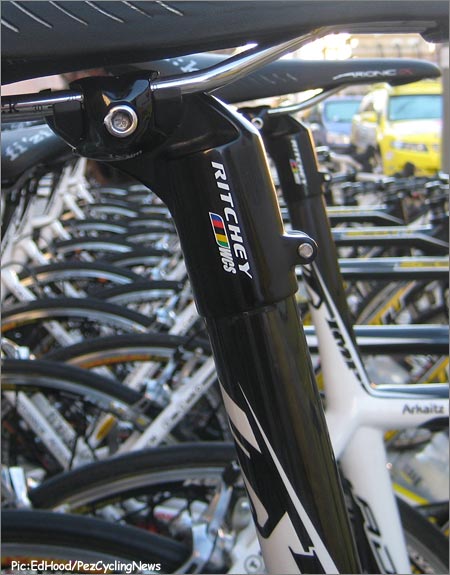 PEZ: I see Leonardo Piepoli is still on a CR 1 with conventional seat post?
Pascal: Yes, that’s because his frame size is so small and we didn’t have the moulds; they’re ready now though, and he’ll soon be on an Addict.

PEZ: Did you learn many lessons with Saunier in 2007?
Pascal: Yes, and development from these lessons will be seen over the next few years, particularly on time trial frames, but you’ll have to wait to see these. 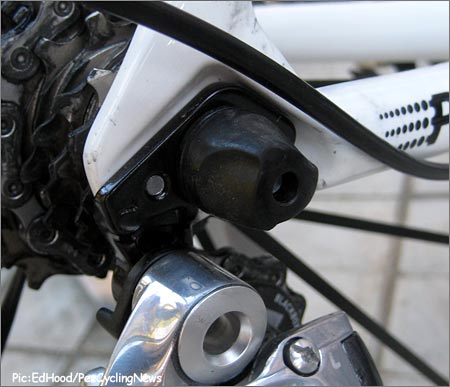 PEZ: How did the carbon drop-outs, cable stops and changer hangers perform?
Pascal: There were no problems, not in production or in race situations, but we didn’t expect there to be because we had done the testing beforehand. 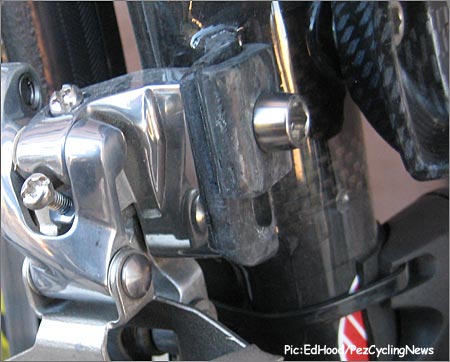 Carbon is used wherever possible – the drop outs, cable guides, and derailleur hangars.

PEZ: Why is carbon dominant now?
Pascal: You can fine-tune every part of the bike, every tube, every centimetre – because it’s hand-laid, you can make it a bit lighter here, a bit more rigid there. With aluminum, you buy the tubes and the characteristics are within them.

It’s the flexibility that carbon gives you in designing a frame and getting it just how you want it to be that’s so appealing. 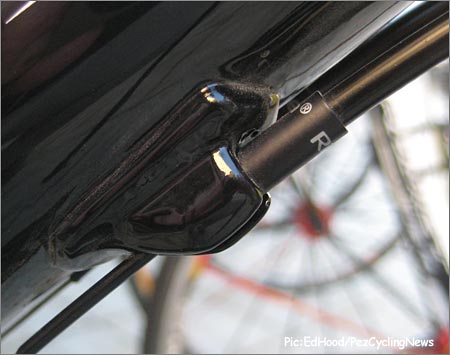 PEZ: What makes a good carbon frame?
Pascal: One of the most important things is that the matt is wrinkle-free; it must be pre-stretched and perfectly placed within the moulds.

This is time consuming and takes experience and good quality control – you mustn’t have wrinkles or air within the moulds. Our frames are made in China but we have Scott quality guys out there 24/7 to ensure that we get the quality we require.

PEZ: What about these cheap carbon frames that are starting to appear?
Pascal: Many of them are not actually carbon, they are mixtures of glass fibre with some carbon; glass fibre is not an inherently bad materiel but it’s brittle and doesn’t have the tensile strength of carbon – the frame may look fine, and it will take a good spray-job, but put it on a test rig and you’ll see immediately that it doesn’t have the strength of a quality carbon frame. 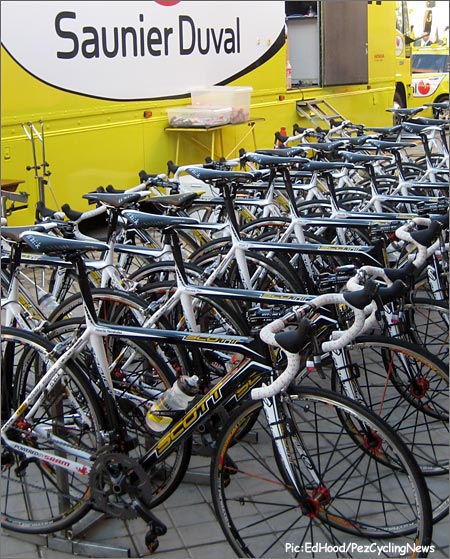 PEZ: What about the future, magnesium? Will steel come back?
Pascal: Magnesium isn’t on our agenda, we’re fully tuned-in to the beauty of carbon, steel may have a ‘retro’ appeal, but we don’t think it’s the answer; look at car manufacturers, all they time they are going away from steel to lighter, stronger materials. 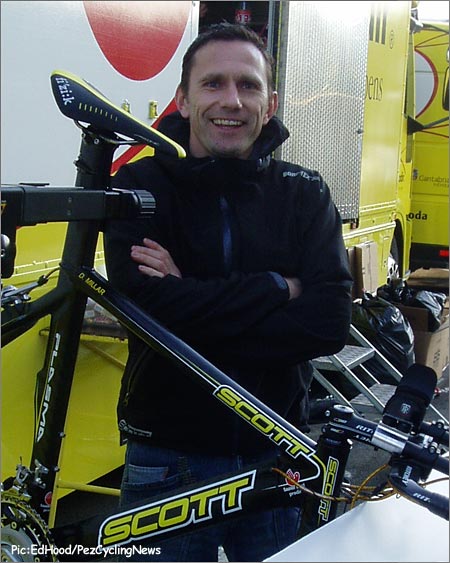 PEZ: What impact has Scott’s involvement with Saunier had on sales?
Pascal: Starting with the negatives; the Iban Mayo affair has had no impact at all; but the stage victories by Simoni, Ricco and Piepoli in the Giro had a very positive effect on sales, we saw demand for frames rise immediately. 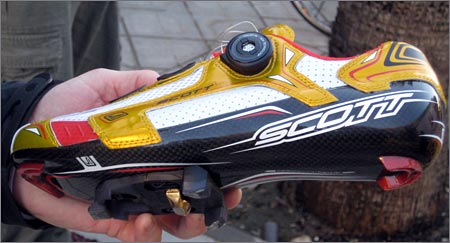 Even Scott’s new carbon soled shoe is made in the same factory as the frames.

PEZ: What’s the latest on the UCI ‘weight limits’, do you think they’ll be relaxed?
Pascal: We’ve given up on that; it would be better talking to the wall! We’ve sent documents and asked them to give us a quality standard or tests to conform to, but we’ve heard nothing.

PEZ: How about those ‘trick’ paint finishes you do?
Pascal: We have a young and very talented French designer in the factory, most of them come from him. 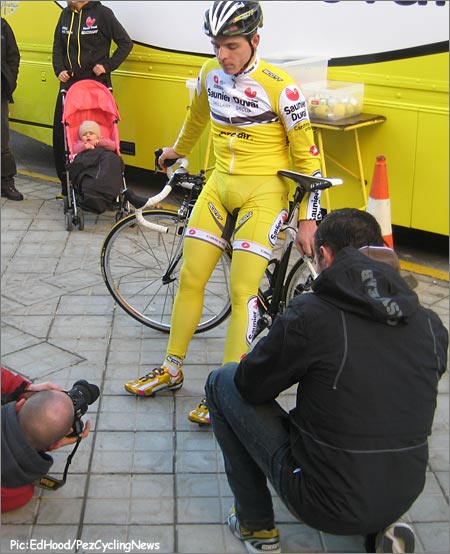 The interview was over, Pascal had to go and photograph the new super-light Scott carbon shoes; “they come from the same factory as the frames and it’s the same carbon as in the base layer of the frame.”

Did someone say “innovative and enthusiastic?”