J’notice that Skoda logo on the white Best Young Rider jerseys this year? The 100-year-old Czech car company has been making big inroads in Europe thanks to an alliance with VW, much-improved quality and a multi-year commitment to pro cycling. Pascal Orsini checked in with Skoda France’s marketing honch, Thierry Sionneau, to see how it’s all working out. 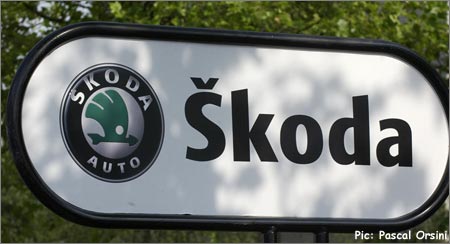 We’re told that “Skoda” translates as: “pity.” The newer models are far from pitiful.

Pez: Skoda is on the Tour for the third year, how has it affected sales and your brand image?

Thierry Sionneau: Our sales grew in the last two years. (As) for the repercussions of the Tour de France, it is hard to say with precision because the growth is the result of three major parameters: our sponsoring of cycling races, the new Octavia launched in 2004 and the press, which gave a good reviews to our models.

What is sure is that people clearly identified Skoda as a partner of the Tour on the first year. According to a survey made by TNS-Sofres for ASO on the 2004 Tour de France, Skoda had the same level of awareness as Champion (Ed: Champion sponsors the mountain jersey) had when beginning its sponsoring.

The brand image is well improved in Western Europe, for sure because Skoda is part of the VW group but mainly thanks to the quality of our models.

Pez: After the Tour contract ends next year, what is your goal?

TS: On our side we want to continue sponsoring cycling races and the partnership with ASO. There are some discussions and we will continue after the Tour. We would like to conclude the contract by the end of the year in order to have a good 2007 year. We are optimistic. 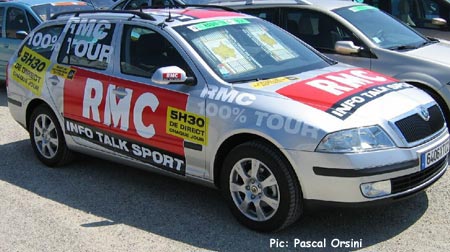 (Some) Tour media get Skoda’s to tool around in. Monte-Carlo Radio broadcasts live Tour coverage every afternoon!

Pez: How many cars do you supply to ASO?

TS: We give them a permanent quantity of 65 cars … It is sufficient for them to cover the spring and autumn races. For the Tour de France we rent them an extra 115 cars. The cars are at their disposal from end of May until the end of July. We also have 33 cars for media and press people.

Pez: What about the caravan?

TS: We have ten cars there. We also have around ten for the Skoda Staff. 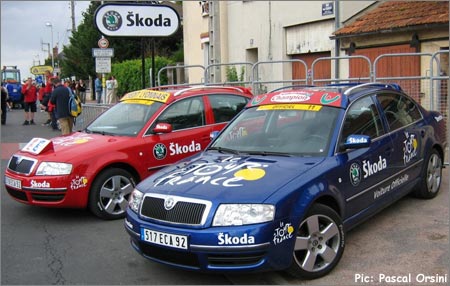 Get to the back of the line! These Skoda Superb models belong to the Tour officials.

Pez: You also supply many of the teams …

TS: Yes, this year Skoda provides the cars for ten teams. Each of them have 12 cars (mainly the Skoda Octavia Combi). (The Skoda importer in) each country is sponsoring one team. In France we are supporting Credit-Agricole. We support one team by country; the other teams rent cars at a very interesting price but those are rental cars.

Soon to host the Thor de France himself, this team Skoda followed Husvod in the prologue.

Pez: What are you doing with the extra cars after the Tour?

TS: The stickers are removed, the cars are checked and sold through the dealers. They have about 10,000 kms (race and extra travel) so we can sell them even before the Tour. At the moment we already have sold them. I think there remain only 5 or 6 to be sold. 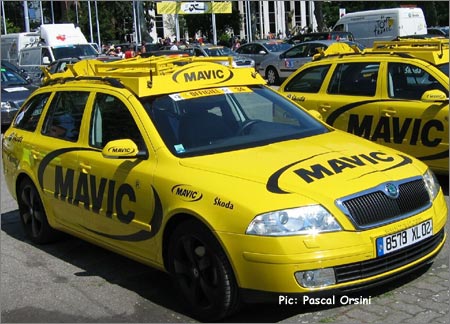 Hi Honey…? Listen, I’ll be taking delivery of our new Skoda Octavia Combis later today, but I got a great deal on a different color….

Pez: How many people are working for Skoda on the Tour?

TS: Globally 130 people are working for us. We have ten mechanics and three managers. In the caravan we have ten drivers, ten hostesses in the cars and one driver plus five animators on the podium (the caravan float). We also have hostess on the Village Depart, of course on the arrival podium for the white jersey we are sponsoring. Then we also have people for logistic aspects. 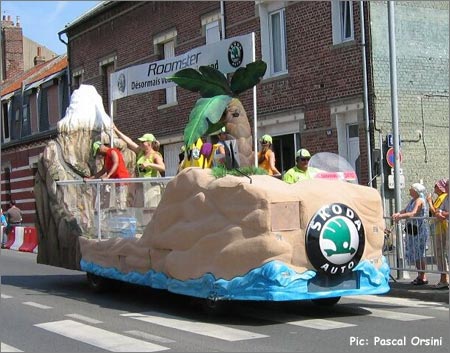 Not (yet) a production model, Skoda provided this rolling podium float for the Best Young Rider award – and the Tour’s publicity caravan.

Pez: Is the Tour a way to test some new products or equipment?

TS: No, we use production vehicles and we do not perform any tests. We just can say that there is no trouble driving at 30 km/h on a mountain with an ambient temperature of around 40°C. 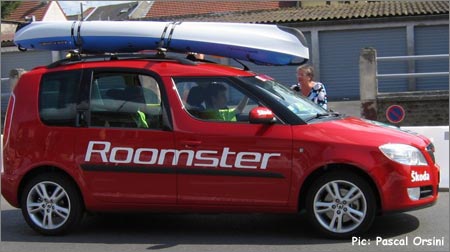 The new Roomster model was introduced at the Tour and will go on sale in September. Skoda took orders for it at the Tour.

Pez: What are your best times on the Tour and the worst ones?

TS: The Tour is a great family and once you’re inside everybody is usually very sympathetic. I think the most difficult was perhaps at the very beginning of the story, when we took over from the former partner. The people from ASO were disappointed and wondered why they had to drive Skoda cars. They were considering themselves as punished guys. The best was perhaps fifteen days later when we heard from the same people that our cars were very good and comfortable. For example, C. Prudhomme, the Tour Director, is very tall and he said to us that it was the first time on the Tour that he was in the back of a car for 6 hours everyday without any trouble with his back or his legs. Those are good times!

For more info check out: