Australia’s Matt White: twelve years a pro – he won a Tour de Suisse stage and his last race, now he’s a rookie DS with Slipstream, we talked to him about his new job, guiding the team at Tirreno, the Primavera and – argyle.

Pez: How’s the new job and are you enjoying it, Matt?

Matt: I’m enjoying it, it’s exactly as I imagined; I was a pro for 12 seasons and I wasn’t a rider who walked about with me head up me arse – I knew what was happening behind the scenes. 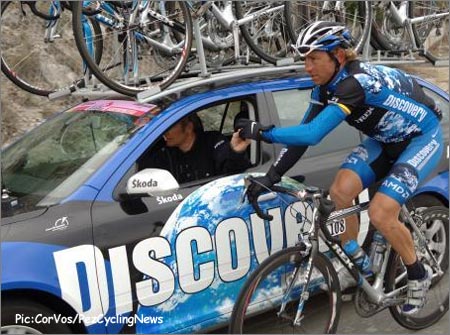 Last year Matt was racing San Remo – this year he’ll be driving it for his new team.

Pez: Was becoming a DS something you had thought about as a pro?

Matt: I hadn’t dreamed of being a DS, but when the opportunity came along, I wasn’t about to refuse it. Jonathan Vaughters approached me last April; but I had to make a decision before the middle of the year. There aren’t too many opportunities to be a DS, especially if you’re an Aussie, so it wasn’t a difficult decision. 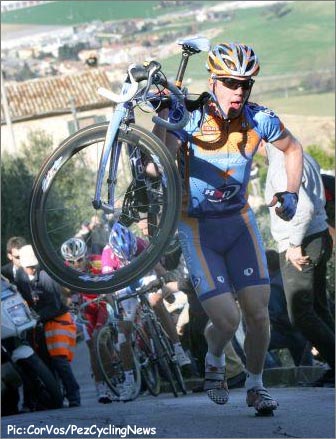 Running the final climb on Tirreno’s stage 3 was not uncommon – even the motos fell over… (Note those snazzy D2 shoes.)

Pez: What’s the hardest thing about being a DS?

Pez: What’s the best thing about being a DS?

Matt: Not racing but being part of the race. There are a lot of young guys on the team who want to listen and learn, it might have been more difficult for me if there were older guys who were less likely to want to listen, but it’s all new to these guys and they want to learn. 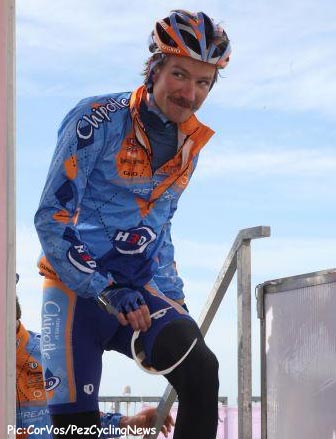 Dave Z. and his ‘stache very nearly won the TT at Tirreno.

Pez: How are the young American guys settling in?

Matt: We have a lot of talented guys in the 23 to 25 bracket for whom the next couple of years are important, it’s the most difficult phase of your career, stepping up to the next level. I’m glad to be here guiding them through it and I think we have a lot of potential here – we’re giving them the ideal opportunity, top equipment, a great programme and a strong infra-structure.

Pez: How about Tirreno?

Matt: We were really happy; we had a top ten with Ryder Hesjedal [Canada in 8th] and were close to a stage win with Davie Zee in the time trial.
The race wasn’t a huge focus for us and to ride the way we did made it a successful race for us.

Pez: What did you think of the Montelupone stage, where guys were walking?

Matt: It’s just part of the spectacle of pro bike racing, maybe it wasn’t a good idea to take the motor bikes up there, but it was the same for everyone.

Matt: Coming here with a young team, getting a top ten on GC and nearly winning a stage.

Matt: We got wet for the last 20 minutes! There’s nothing to complain about; the food is always great in Italy, the hotels were good, there were no injuries and no one got sick. Tirreno is a great start point for the Classics; it was always my preference as a rider. 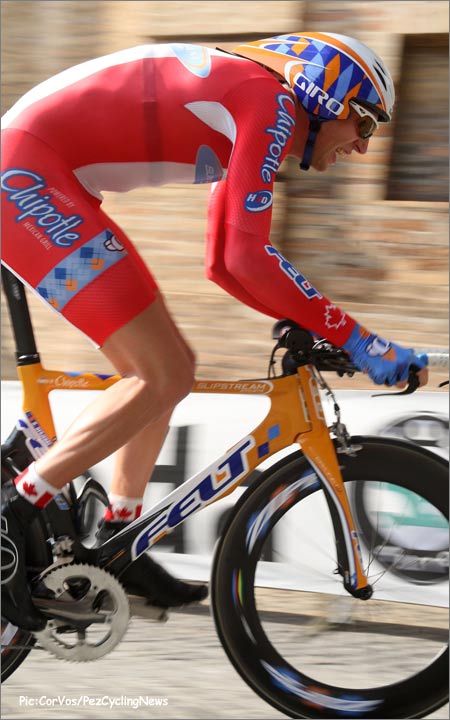 Matt: He got through Tirreno and he still has a plenty of race days before Roubaix, he’ll be good for that.

Pez: How many Primaveras did you ride?

Matt: I rode six, but I only got over the Poggio with the leaders once. With one-and-a-half kilometres to go a guy in front lost the wheel and I finished just off the back of the lead group. I was riding for Stuey (O’Grady) that day and he got third, so it was a good day.

Matt: In my book, there are only three guys who can win – Oscar Freire, Filippo Pozzato and Alessandro Petacchi.

Matt: Hushovd’s a podium possible, Cancellara might get the gap, but it’ll come back – he can’t win, no chance. 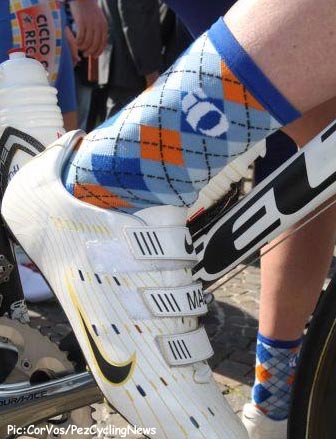 Matt: I’m thinking! yeah – It’s something different, unique to us!

Thanks to Matt and good luck to the Argyle boys for the Primavera.

Seeking San Remo Pt2: The Duel To Via Roma