With the Discovery Channel team packing it in, who will carry the baton for pro cycling in the US? The guys at Slipstream think they have the answer. PEZ recently talked with rider Steven Cozza, on how things look from the argyle out.

Slipstream Director Jonathan Vaughters has made some big-time additions to his roster of riders. Dave Zabriskie, Christian Vande Velde, David Millar, Magnus Backstedt ,Tom Danielson and Julian Dean have all signed with Slipstream in recent weeks.

So, where does this leave the core of riders who currently carry the Slipstream banner? Bob Cullinan caught up with Slipstream’s Steven Cozza near his NorCal home. The 22 year old is at the fresh end of his career, but already lists a handful of national team appearances and a 2005 U-23 national TT title among his palmares.

BC: You’re getting a whole bunch of new team mates. How does that affect you and the rest of the guys who currently ride for Slipstream?

SC: It’s really good for the team. Now we have these leaders who have years and years of experience that we can work for, and it’s gonna push us to a whole new level. When I’m surrounded by guys who are stronger and better, it pushes me. Now the team is going into races knowing that we can win. 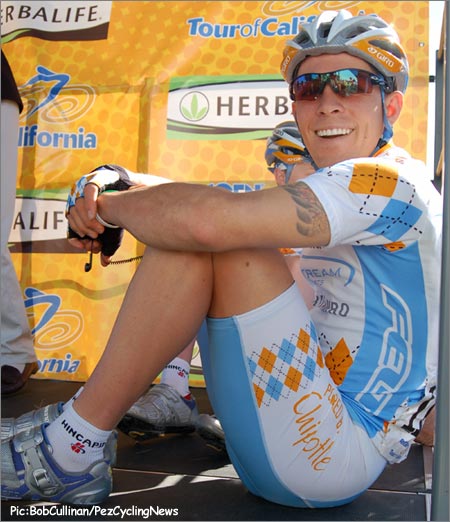 BC: I’d heard that there was a possibility of George Hincapie joining Slipstream, too. True?

SC: George was going to join the team, but then something happened. I think he wanted to have a guarantee that he was going to be able to ride Paris-Roubaix, but since we’re not a Pro Tour team yet, that wasn’t possible.

BC: How soon do you think Slipstream will get Pro Tour status?

SC: To get pro tour status, you have to work your way up, and get right combination of riders. We’re planning on going to the pro tour in 2009.

BC: Slipstream has you guys on a strict drug testing program. How strict is it?

BC: It can’t be cheap for the team to do all this testing, right?

SC: It’s a very expensive program. This year they’ve spent over $400,000 on it. The testing is done through ACE (Agency For Cycling Ethics). It’s a lot of money but it’s really worth it. We’re working very hard to prove that we’re clean.

BC: I’d think that a lot of race directors would want to have Slipsteam in their events, to both make a statement against doping and show the fans that there are clean riders in the sport.

SC: It’s sad that that when people look at cycling many say that we’re all cheaters. For the longest time, there have been people who take shortcuts in sports. It’s the lack of integrity, especially in cycling, that’s been such a big problem. But now the sport is accepting the testing, and they’re catching the cheaters.

Despite all the negatives and the downfall of many of our heroes, a lot of guys are riding cleaner. All I can do is my part, and hope that other guys aren’t cheating us out of wins. When I’m 40 or 50, I want to look back and know that I did it as a clean athlete.

BC: It’s been a pretty rough summer for you. You crashed in a race in France in May… how’s the recovery coming?

SC: The crash happened 15 minutes into stage three of the Tour of Picardie. (Note: 72 of the 139 starters DNF-ed in the rain that day) I went with an attack, and I turned my head to see if I was clear of the other riders. All of a sudden the guy right behind me jumped to the right, we hit, and I landed right on face, right on my head. My helmet smashed like pancake, and my head was all bruised. The first moments I can remember, I was in a French hospital. I don’t know how long I was out for.

BC: Has it been tough getting back on the bike?

SC: After I got back home, I felt like I couldn’t even ride a bike. I broke down. Everything was off. I slept constantly, and I was really depressed. Just the week before I was normal, then all of a sudden, I had all of these problems.

BC: How long did it take before you felt normal again?

SC: I remember the moment I started being hungry again. It was about three weeks after the crash when all the symptoms just went away. The hardest thing for me now is to stay focused, ‘cuz I don’t know what I’m shooting for. I’ve been training my butt off. I’ve never done this much riding in my life.

BC: How soon do you think you’ll be able to race again?

SC:The first race will probably be the US championships in Greenville, South Carolina. I’ll definitely do the time trial there, and hopefully I can do the road race as well. After that, maybe the Tour of Missouri.

BC: In many ways, your troubles this summer kind of parallel what’s gone on in cycling.

SC:Yeah, you have to hit rock bottom before you can build back up. But along with hitting that bottom, there are still so many signs of hope.

PEZ thanks Steven for talking with us – and looks forward to watching the ‘new’ team in action.
• Get more info at the team websiteSlipstreamSports.com.