The boys from CyclingNewsAsia recently got the chance to speak with one of the world’s up and coming sprinters: Sky Rider Chris ‘CJ’ Sutton. In a very open piece, Sutton opens up on his 2010 goals, guys to watch in the classics, the Sky bus and rooming with Wiggins… Being a nice guy, CJ agreed to catch up recently in one of his favourite restaurants; McDonald’s for a McCafe and chat.

Contributed by the fine folks at CyclingNewsAsia

The 25-year old Australian had breakthrough 2009 with one stage of the Tour of Britain, and three consecutive stage victories at the Herald Sun Tour. He then took another sprint victory at the Tour Down Under in January. He has strong links with British cycling, with his father, Gary, a leading professional on the British circuit in the 1980s. His uncle, Shane, was another prolific winner in the UK in the 1980s and 90s and is now, of course, the Head Coach at Team Sky.

Cyclingnewsasia (CNA): The Cycling Australia website has your profession listed as carpenter. Have you done much building lately?
Chris Sutton (CJ): I did a four year apprenticeship but I don’t do much now. I loved it (the apprenticeship) and I loved building. I also wanted to leave school at year 10 so my Dad said if you are going to leave in year 10 then get a trade. I thought it was a great idea as I have always loved playing with Lego and it would be a good back-up if the cycling career did not work out. 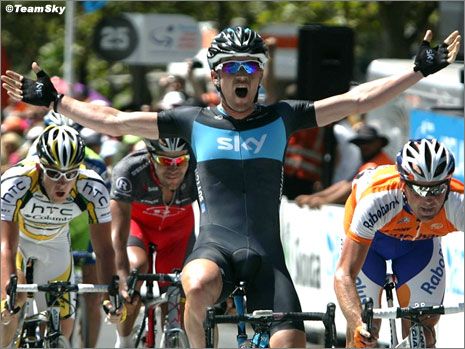 CNA: That’s a pretty smart thing to do for a 14 year old.
CJ: You see so many cyclists who retire then can’t do anything apart from work in a bike shop. Also a lot of my cousins are builders, so one day I would like to get together with them and build my own house.

CNA: Did you go straight into cycling?
CJ: No I played soccer or football, swimming, rugby league. I really enjoyed football but when I started doing two day tours it was taking the whole weekend so I had to make a decision between football and riding.

When I started cycling more my Dad said “I hope you’re doing this for the right reasons’. My parents were great as they did not push me but gave me the love and support to go into cycling. 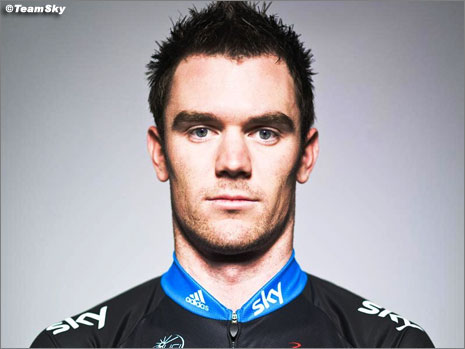 CNA: Where are you based now?
CJ: Based in Girona, Spain with Greg Henderson. Its great as there are a lot of riders based there. My Spanish is getting ok but I need to work on my Catalan. My French is good and I did the AIS programme in Italy so my Italian is good and I studied it at school.

CNA: What where the 2009 highlights for you?
CJ: Winning a Stage of Tour of Britain, and then winning 3 stages at the Sun Tour. It has always being a dream of winning at the Sun Tour. When I was kid I dreamt of winning stages of the Tour de France in the yellow jersey and I know it’s not the same, but winning a stage in your home race in the leader’s jersey is pretty good! 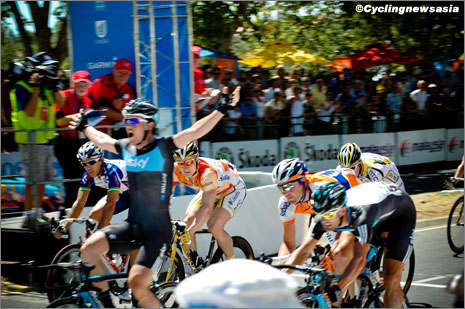 CNA: You started with a win in the Tour Down Under in January. You obviously came into the race in good form?
CJ: I had a very structured programme coming into the race. In the team we all know our jobs and I was there to lead out Hendo (Greg Henderson) I used the Bay Series as training to peak buy doing 3-4 hours in the morning with the guys then racing at night.

CNA: What is your impression of the Tour Down Under now?
CJ: It has become like Europe now with the big crowds and the riders love it. You see people hanging out of the trees cheering you on. I am amazed what it has turned into and I have noticed that guys are coming out earlier to be prepared. It’s hard coming from a northern winter to the Aussie summer.

It also still has that chilled out feel. No transfers and staying in the same hotel is really nice as it reduces the stress. As the race does not have a time trial and warm weather keeps the mechanics happy (as they only have to build one bike for the riders) as well. I always tell them; ‘put on sunscreen’, but they never listen and on day two their arms are burnt red. Don’t get me wrong it’s a hard race and deserves ProTour status, and it’s getting harder each year… 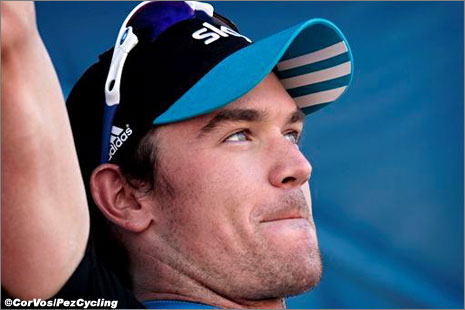 CNA: In an earlier interview you said you goal in 2010 was to ‘Step it Up’. When you are looking back on 2010 how will you define it as a success?
Chris Sutton (CJ): I am here (at Team Sky) to learn and get experience form the guys and support our key riders in the Classics in April. I have never been part of a team that gels so well. Everything is focused on the rider doing their best. If you do your best and win you will get a pat on the back, if you do your best and get 10th, you get a pat on the back and then the next day we go back tother and look how to improve.

Getting the TDU win was great but I want to be consistent in 2010; 2009 I had too many ups and downs. In the Sky team meeting in Manchester last November we agreed my goals for 2010 and that is what I working towards. I speak a lot with my Director and Coach so there is a lot of communication on how we are progressing.
I would like to win more races but my main job is to support the older guys and one day I will be the experienced guy on the team who the new guys will be supporting me to win Paris – Roubaix. 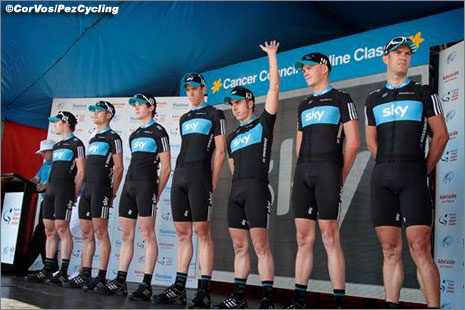 CNA: And your post Classics programme?
CJ: Hopefully I am good enough and I will get a ride at the Giro (Tour of Italy). The other thing I want to do is step up and take a leadership position of sprint if one of the other guys is having an off day.

CNA: Tour de France?
CJ: I will probably be sitting home watching it as I need a year of so under my belt.

CNA: Anything that stuck out as you as different form previous teams when your joined Sky?
CJ: The team is well structured and they are leaving nothing to chance. It’s good, but not overly strict as the responsibility always rests with you. For example, I spoke with the nutritionist and I told him I liked McDonald’s and KFC. He said that being a high carb burner I can have Mc Donald’s once or twice a week and it’s not going to ruin my programme. It’s nice to know if you have a hard day you can go and have cheese burger afterwards. All things in moderation though.

The sports psychologist is great, this is the first time I am using one. I was a bit unsure at first as I did not think I needed and it is a huge help. I don’t want to give all the secrets away but as an example, being a sprinter he has given me some tips on how to focus during the finish of a race, and not get distracted by other riders.

CNA: And the gear at Sky?
CJ: Clothing is great and the Pinarello bikes are awesome. I can’t believe I go training on it.

CNA: And the bus?
CJ: The bus is incredible; it’s like travelling first class on a plane. Your own reclining leather seat, personal workstations, big screen TVs. It makes the longer transfers so much better. As I keep saying – It’s all kinds of wrong, which makes it sooo right . . .

CNA: And which Sky riders do you look forward to riding with?
CJ: We have 27 riders on the team we know everyone is going to bleed for each other. I am looking forward to riding and learning from Hayman, Henderson, Alverson and Gerro (Simon Gerrans). Gerro is incredible, he looks at a race and says that’s my stage and then the next thing you see is he is in the break and he wins the stage.

Roubaix is a big dream for me so I want to learn from (Juan Antonio) Flecha. Also we have a great management team with guys like (Sean) Yates and (Scott) Sutherland. All of our directors are ex-riders who know the races very well which is a big advantage for us.

CNA: And riding with Wiggins?
CJ: He is a great mentor for me – I rode with him at Cofdis and Garmin. I think he might be part Aussie as he loves to have a joke and loves to take the mickey out of people. I have roomed with him a lot and love it. He has good taste in music and a great sense of humour, he’s very chilled out and loves his family.

Sky have a dream want to have the first British Tour de France champion in 3-4 years. Internally there’s not as much pressure on Wiggins in the 2010 Tour as there may be from outside. We know we have a lot to learn and improve in the 3 week tours. The Sky philosophy is looking for marginal gains, the little things that add up to make a difference. It’s not just about the Tour for us. With guys like Flecha, Hayman, and Haggen we also have a strong line up for the April races. 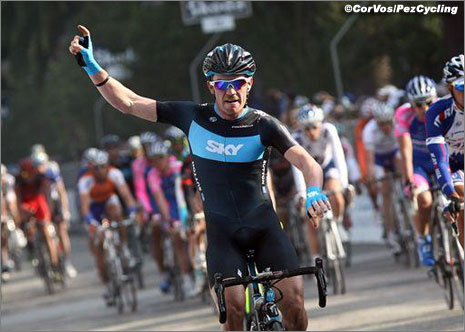 CNA: Did you enjoy your time at Garmin?
CJ: I had so much fun and it was a hard decision to leave; at the end of the day it’s business and I want to go forward in my career. Dave Brailsford outlined a vision for me as a bike rider and I was onboard. A lot of the Garmin guys are based in Girona and I’m sure we’ll stay mates. I hope they were happy with what I did there. They gave me the opportunity and I owe a lot to JV (Jonathan Vaughters).

CNA: Which Garmin riders should we watch for 2010?
CJ: Guys to watch, Cameron Meyer when he concentrates on the road and drops the track, and Tyler Farrar is coming on in the sprinting and was hitting some form at the end of 2009.

My favourite saying is “if you take too many short cuts you go round in circles.” You have to do the hard work.