As cyclists, many of us ride for fitness, ride for the competition, or some even for a few extra pennies. It’s hard to argue with a rider who rides for something more than personal ambition, someone who rides for a cause. Just as Lance Armstrong promotes cancer research, two young elite cyclists out of the Southeast ride for a cause – a cure for juvenile diabetes. PEZ sat down with one of the two, Phil Southerland, for a chat…

Part I – Diabetes: A Primer

PEZ: Let’s start at the beginning, what exactly is diabetes?

Phil: Type 1 diabetes is a disease in which the pancreas does not produce any insulin. None. Insulin is the hormone that is used to regulate one’s blood sugar. Regulating one’s blood sugar is crucial, because if it’s not properly regulated, there is a risk of death as well as long-term side effects – loss of feeling in fingers and toes, blindness, heart problems, kidney failure.

In the USA there are 18 million people with diabetes, 1.3 million of which are Type 1’s. Every 30 seconds a new case is diagnosed. All diabetics can benefit by living an active lifestyle, whether it be lifting weights, running, or my personal favorite, cycling – particularly Type II diabetics, who are not born with diabetes, but get it through an unhealthy lifestyle. 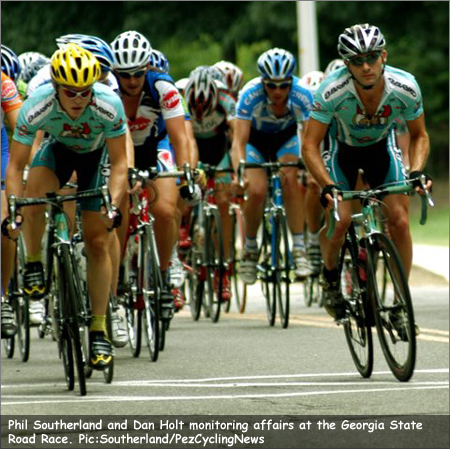 How long have you been a diabetic?

Phil: I’ve been a diabetic since I was seven months old – so 23 years.

You mention that regulating one’s blood sugar is crucial as a diabetic, why?

Phil: Good control is crucial because it prevents long term side effects such as blindness. If a diabetic’s blood sugar gets too low they can die on the spot. If it gets too high it will cause permanent damage. Unfortunately, diabetes is a disease where what you do today won’t affect you until many years down the road. It is vital for diabetics to take care of themselves now.

How is this control measured?

Phil: The best way good control is measured is an HBA1C — this test measures your blood sugar over the past three months. A non-diabetic would be between 5.5 and 6, but some diabetics have numbers as high as 10. Values over 7 will cause long term problems in the future.

Diabetes control is like training, if you overtrain there will be problems, the same goes for undertraining – you want to take it to that perfect level and keep it there as long as possible – to achieve maximal control and minimal risk of long-term side effects. One of the goals of Team Type 1 is to get every diabetic to strive for 6.

What is a typical HBA1C for you?

Phil: 5.8 to 6.2 over the past 10 years – the duration that I have been racing. So, as you can see, with good control, you can get the HBA1C to normal levels, which eliminates the risk of long-term damage.

What are normal blood sugar levels?

How does diabetes affect you as an athlete?

Phil: To be able to ride well and race competitively, I have to have good control. If my blood sugar is too high, I’ll be sluggish, but if it’s too low I’ll fall off my bike. If I bonk, I die. Over the years, I’ve learned to use cycling to lower the amount of insulin I actually have to use. It has forced me to check my blood sugar more often and to strive for tight control.

When I’m training heavily, my insulin is twice as effective as if I wasn’t training. Meaning that, I can do fewer shots and eat more of what I want to eat.

Phil: Typically I’ll check my blood sugar between 10 and 15 times a day, and give myself 6-9 shots a day. For instance, during the last week of my base training this winter, I got to where I was only doing three shots a day, and my blood sugar never went above 110. It was the easiest it has ever been in my life to control.

It was actually a pain, it would be ten o clock at night and my blood sugar would not go up, I’d have to eat tons of candy to get it to go up, just to make it safe to go to sleep – overnight, if I’m not careful, my blood sugar can drop dangerously low – like what happened to me at the 2003 Milk Ras in Ireland. 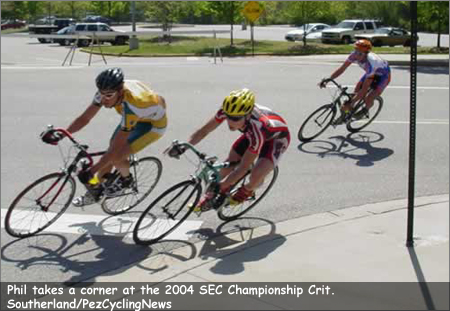 I sense a story coming on…

Phil: 3 years ago, we did the Milk Ras in Ireland which is 8 days and 800 miles. That was the longest and hardest I’d gone in consecutive days by day 3. Near the end of the third day, I began to bonk, and I just couldn’t hold a wheel anymore. When the stage was over and we got back to our host’s house, I begged her for cereal, but she wouldn’t give me any, she would only give me soup. My glycogen stores were empty, and I couldn’t recover. That night, I did the lowest night time dosage that I had ever done, and thought it was safe to go to sleep, but I was wrong.

The next morning, my teammate and best friend, Dan Holt, awoke to me standing over him and staring at him. I was incoherent. They forced me to take a bunch of Hammer Gel, fed me a pear, and eventually I was coherent enough to check my own blood sugar, at which point I measured it to be 16, the lowest I’ve ever seen it (normal is 80-120). I should have died. Fortunately, I listened to my mom’s advice and told my teammate’s what to do if I was passed out or acting dumber than normal.

Were you able to start that day?

Phil: I started that day and had a horrible day, because my glycogen stores were completely depleted. Over the next three days I did a grand total of nine shots – which is ridiculously little. I was fuelling constantly throughout the day. It took me until the 7th stage to feel normal again, at which point I finished the Milk Ras as top American.

What do you use for nutrition during races?

Phil: I constantly take in sugars. I use Hammer Gel, as it’s been in my experience the best gel for diabetics as it’s the longest lasting. When riding, I always have to ingest sugar, constantly. There are times in races or training rides when I feel weak and I take a sip of Gatorade, feel good for 10 minutes, but then start to feel bad again, then I realize what’s going on and I drink a lot of Gatorade, and eat a lot of sugar, and then I feel better.

You had an impressive ride at U23 Nationals a couple years ago, correct?

Phil: At the 2003 Espoir Nationals were in College Station, TX. It was 103 degrees, 30 miles into the 125 mile race. That entire day I did nothing but eat and eat and eat to make sure that I did not bonk. It was one of the luckiest days of my life, as I just always seemed to be in the right place at the right time. I just missed the final winning move, but managed 9th place – which that year, the top 8 were all either professional or on the National Team. There were 33 finishers out of 120 starters. Diabetes did not stop me from achieving my goal of a top 10 at Espoir Nationals.

What is Team Type 1?

Phil: Team Type 1 was founded by myself and Joe Eldridge, both Type 1 diabetics. We are both Elite cyclists on the Loco’s/Georgia Cyclesport team based out of Athens, Georgia. Team Type 1 is a not for profit organization with three main goals:

1.) Educate diabetics on the importance of good control (HBA1C of 6)
2.) To raise money to subsidize the insurance for diabetics, as it is 2.4 times more expensive for diabetics to get insurance – 450 dollars a month for insurance, and 400 dollars for the medical supplies – the tools to live.
3.) To cure diabetes, because that’s the root of the problem

We’re unique in that we can allow donors to choose where they want their money to go: to go towards a cure or to insure.

We want to make it clear to diabetics, children especially, that this is a disease that they can manage and control, and it should never hold them back from achieving their wildest dreams and desires. 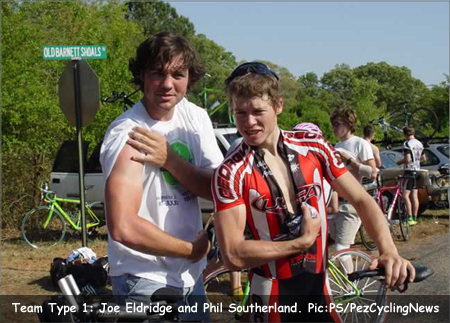 Throughout the years I have met many people who have altered their lives significantly due to diabetes, but I have found that with tight control you can live the same life that your best friend would live.

I live the same life as anyone else lives, except for the 15 minutes a day that I spend checking my blood or giving myself a shot. It hasn’t stopped me from accomplishing any of my goals in cycling or elsewhere.

Recently, we have teamed up with 80 Days for Diabetes – their goal is to raise 100,000 dollars towards research for a cure, by June 8th. LINK

We’re also raising money by selling Team Type 1 t-shirts which are 20 dollars (shipping is deadly but included). The front of the t-shirt looks like this:

Part of our fundraising is done through riding – donations can be done on a per mile basis, with an average mileage of 12,000 miles a year, it’s where we get our slogan: Pedaling for a cure, one mile at a time. Or for Euro Team Type 1 – kilometers.

I want all diabetics in the country to have someone to turn to, someone that does not have to be their doctor. Kids have trouble listening to doctors and their parents, or at least obeying them – if you or anyone you know is a diabetic, please feel free to contact me: [email protected].