New Zealand is a small country in terms of geography and cycling, that manages to each year score top results in international competitions. In September, 21-year old Peter Latham rode the all-black kit to a podium finish in the U23 Time trial. We talked to Peter about his short past, big present, and even bigger future…

PEZ: Kia-Ora Pete, first of all congratulations on your great result in the U23 World time-trial competitions! You did a great ride, but when where you sure you’d make the podium?

PL: I was one of the first riders off in the second wave of four. So I had a long wait alongside eventual winner, the Russian Mikhail Ignatiev, in the ‘Hotseat’. It was 3 hours later with only the Ukrainian still to finish and who pushed me into 3rd that I knew I was going to be on the podium. 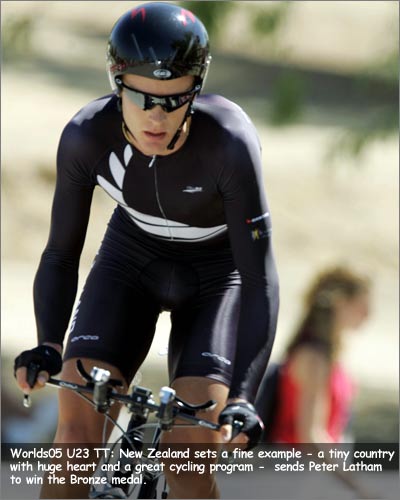 PEZ: How would you characterize the circuit in Madrid? Where were the tough/ critical points – and how did you cope with them?

PL: It was a circuit that involved a lot concentration, a circuit where it was important to give effort at the right times, and a circuit that was definitely very testing. For me, I broke the race down into 4 quarters; the 4 major climbs and tried to concentrate on hitting every climb as hard as I could, I felt that more time could be gained on the uphill parts than going a couple of km/hr faster on the downhill’s.

PEZ: What did you expect from the other riders, like from your own National team as well as from other big names in the U23 circuit? And how did it finally work out for them compared to your expectations?

PL: This was my first time at a Road World Championships so I didn’t really know who to look out for, although after racing Ignatiev since I was junior on the track I knew he would post a fast time. I wasn’t surprised when I came in, that he had the fastest time although I expected many more riders to beat my time throughout the afternoon.

PEZ: When thinking about other Kiwi cyclists, there are not so many names in the cycling business at the moment. In former times, there was Anthony Peden on the track, but now… How do you see the cycling situation in New Zealand at the moment? And what’s the future?

Pete as himself, in local team kit from Southern France.

PEZ: As a cyclist from the southern hemisphere, you normally have a totally different season from many of us in the north. How is a cycling season in New Zealand set up? And how do you combine it with travelling a lot for racing abroad, like in the US or in Europe?

PL: For starters, cycling is a very small sport in N.Z. There aren’t races every weekend like in Europe and if you want to make cycling a career the only option is to come overseas. However there are several big races held in New Zealand every year such as the U.C.I 2.2 Tour of Wellington in November. It means that the season ends up being very long for the riders that spend the summer in Europe or the U.S. However I was lucky this year by being able to have a break in June.

PEZ: Let’s talk about you as a person. When and why did you take up cycling? Who brought you to this sport? And what did it mean to you to perform cycling better and better from year to year?

PL: I started cycling because my mates were doing it. I was 14 and just enjoyed riding my bike alongside my friends. 7 years later and it is still the same. I am a very competitive person too!

PEZ: Who supported you most in your cycling career? How did this work out during your career as a young rider in daily training and racing?

PL: I am the first in the family to ride a bike and my parents never pushed me, yet at the same time always encouraging me; they are my biggest supporters and probably now know more about cycling than I do! I have been lucky to have been looked after by some really good people which has meant I have steadily progressed every year.

Pete (second from left) and his training posse in Limoux, France.

PEZ: Practising competitive cycling for years has effects on somebody’s personality. What do you think it means to yours?

PL: Because of cycling I have had the opportunity to travel and meet many different people. To be able to speak another language and to say I have been all around the world already makes me feel privileged that I ride a bike. I have become more cultured because of this.

PEZ: Which races did you do this season? And how did you prepare specifically for the Worlds in Madrid?

PL: After the Track World Championships I flew to France to Join the DN1 amateur team Cote D’amor. I raced a number of U23 World Cups such as Liege Bastogne Liege and Paris Roubaix, U.C.I. 1.2’s and 2.2s as well as amateur races all around France. My preparation for the Worlds didn’t include anything specific. I did the races the team told me to do and arrived in Madrid with good form!

PL: Next March is the Commonwealth Games in Melbourne and to win the Teams Pursuit there would be something special. From there I want to have a solid road season in France, keep learning, and hopefully along with some good results I will be ready to make it as a pro in 2007.

PEZ: Best of luck and lots of success for the future – and many thanks for taking the time to answer our questions! 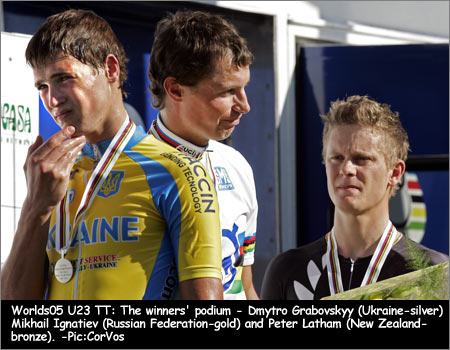 Florian is an amateur road racer and PEZ-Man in Germany. Aged 27, he is a physician and currently doing his Ph.D. in endurance training and testing, focusing on metabolic and ergospirometric parameters in cycling performance. You can contact him via [email protected] or have a look at his website www.florianwenk.com
Like PEZ? Why not subscribe to our weekly newsletter to receive updates and reminders on what's cool in road cycling?