If you’re on Bjarne Riis’ Team CSC, you have to be feeling pretty good. Let’s take a look at just some of the results: Danish, Luxembourg, and Russian ITT champs. Paris-Nice and Criterium International winner. Top 5 Roubaix finish. Top 5 Tour de Suisse. The list goes on. For the American one-two of Dave Zabriskie and Christian Vande Velde, life is good as well. PEZ caught up with both to see what’s going on inside Team CSC.

Dave Zabriskie was reached first, preparing himself in a zen-like state to partake in this year’s Tour de France.

PEZ: Dave, congrats on making the roster for CSC and the Tour de France. Must feel great. Elated? Nervous? Skerred? Ecstatic? You have a real threat for the overall in Ivan Basso, much is expected of the team, you gotta be at LEAST a LITTLE freaked out. I mean, you’re a cool customer and all, but man… this has got to be pretty big for you!

DZ: In the words of the now fallen Mike Tyson, “I’m ecstatic.” I think Basso will do well in the overall. I’m really excited
to be going there and help him out as much as I can.

Dave Z waves secret sign to Dave A at TDG.

PEZ: : All cyclists dream of the Tour. Have you been excited about the possibility as a rider, or, is it the fact that the crepes in Utah suck, and you need to go to France to get the real thing?

DZ: : Many things in Utah suck, the crepes are not one of them though. And, while I have never actually fallen asleep and
dreamt of the Tour, I’ve had shaman-like visions of going there ever since I slipped into my first lycra warrior suit – now the biggest battle of them all is upon me…

PEZ: : Do you speak any French?

DZ: : I can parle French not so much. But, I je t’aime le language. 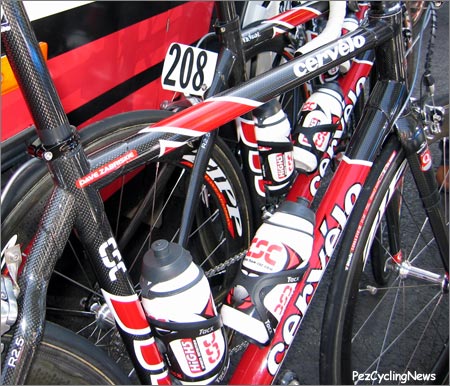 Dave’s Cervelo waits patiently outside the team bus at the 2005 Giro stage 16 start.

PEZ: : Will you conduct your on-the-bike witty interviews again that you did at the Giro and posted on your site? If so, I ask you get Levi Leipheimer’s views on the piss poor dialogue of Star Wars III and also his views on the possibility that Sesame Street may be a tool the communists are using to control North American children.

Christian Vande Velde won’t be joining Dave in France this year (although he did ride the TDF with Liberty Seguros in ’04), instead he’ll be re-energizing himself in Austria for later season duties for CSC. We caught up with him at his Girona, Spain, home and asked what’s going down with the native Illinoisan.

PEZ: : So, you’ve had a solid Tour de Georgia, a VERY solid Giro…..what next? Is there still that “one spot” for the Tour team, and do you like your chances? If not the Tour, where can we find you?

CVV: You won’t see me at the tour this year. In CSC fashion you will find me at a training camp in Austria during the Tour. After that maybe the Saxon tour and then Benelux.

PEZ : Have you had any Old Style shipped to you? Want some? (Old Style is some of Chicago’s most famous beer – ed.)

CVV: Haven’t had any Old Style shipped out to me. I’ll keep the Dog Style in the Midwest where it belongs. 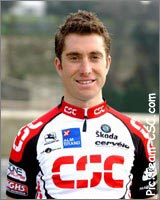 PEZ: The excitement must be continuing on one of the hottest teams in the game right now, CSC. How’s Bjarne these days? Content? Wanting more?

CVV: Bjarne is never content and I think that no big sportsman ever is. He is busy as usual trying to get the best team prepared for every race of the year.

PEZ: : How are you feeling? Mid season blah’s yet? Legs good?

CVV: I’ve been pretty dead since the Giro. I went to the Dauphine right after and that sucked any energy/motivation out of me. I’m coming out of the doldrums now and feeling like a bike rider again.

PEZ: What have you been listening to, music-wise?

CVV: The new Mike Jones is off the hook. At first glance I thought, “Mike Jones the bike rider?” Then, I thought about it and realized that Mike Jones is probably the most common name in States next to Jenny Smith and Ghintus Mikachaskus my friend from high school.

Well boys, we at PEZ wish you all the luck! Thanks for the time, and rubber side down to both of you!