Even for the most talented riders with cobble-solid resumes, graduating from the UCI’s espoir (under age 23) category can be a bit like bringing a baby home from the hospital: everything you did to get to this point suddenly seems a questionable lark; it all becomes real — real fast!

Still, unlike having a baby, you DO need a license to race in the ProTour, and aging out of Espoirs is better than any imaginable alternative, especially if you have a contract with one of the top pro teams to usher you into the top leagues. 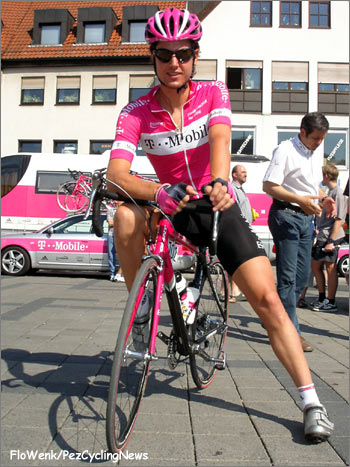 Dutch pro Bas Giling (who turns 23 this fall) is mid-way through his first year on T-Mobile, after several years with the Rabobank Espoirs team. Pez took the chance to talk to the young classics specialist and ask about his way to a contract with T-Mobile as well as his plans for the future.

PEZ: What’s it like to ride on the same team as Jan Ullrich?
BG: It has always been a dream of mine to be a professional cyclist. When Jan Ullrich won the tour in ґ97 I was watching it all on television. That stimulated me. Then, when I got the contract with T-Mobile, I was very happy. Riding in the same team like Jan Ullrich is just great! 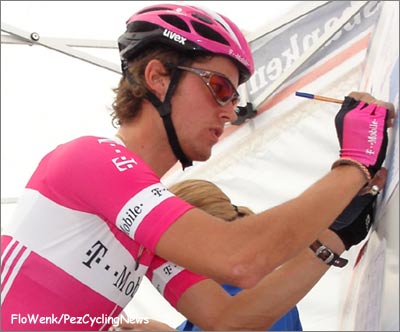 PEZ: It’s said that the methods of this Rabobank Espoirs team are very special – and a key to the team’s great results in the past. Would you like to give us an insight into what’s so special in this team?
BG: Itґs just the atmosphere in the team. We were always laughing and joking. All the boys were friends of each other and in the races we wanted to help each other. We were training good, our program was very good and the staff of mechanics and soigneurs was superb. One week we were riding a pro race and the other week we were riding with the Espoirs – then you have some kind of overdrive, it just makes you stronger.

PEZ: What did it mean to your daily life, not to race for Rabobank anymore but for one of the best professional teams in the world, T-Mobile?
BG: The language is the biggest difference. In the beginning you just have to pay attention all the time, not to miss anything what is being said. At this moment I understand most German, so itґs ok. Furthermore everything with T-Mobile is big: big riders, big program, a lot of material, a lot of staff. Everything is tiptop. All they ask from you is to ride your bike as fast as possible. With Rabobank it was a little bit more tutorial: they were teaching you to be a cyclist. Everything I know at this moment, I’ve learned at the Rabobank team. But I will have to learn a lot more within the next years and I know they will teach it to me at T-Mobile.

PEZ: When and why did you take up cycling?
BG: I started cycling because my father did it. He was a speed skater in the winter, and he did cycling for summer training. My uncle had been World Champion on the track and my two nephews are also cyclists. My whole family is into sports. So I started at a youth category at the age of 15. Then when I was 16, I became Dutch Junior Road Champion. When I became espoir, I was picked up by Rabobank. Then I wanted to be a pro cyclist. I quit school and moved to Belgium, which resulted in a boost in my performance. So last year was a very good year, that’s why I was picked up by T-Mobile.

PEZ: Who supported you most in your cycling career? How did this work out during your career as a young rider in daily training and racing?
BG: As I said, my whole family was into sports, they all supported me, but especially my parents of course. My father has a lot of know-how and helped me with the tactics and training. My mother supported me in a different way, by just taking care of me when I was at home and she even motorpaced me on the scooter for many hours!I also have a trainer, since I was 17, he is still my trainer and someone who just knows me inside-out. I can always ask him anything. His name is Renй Kos, also a former cyclist.

PEZ: What do you think did competitive cycling has done to your personality?
BG: It just forms you. You travel a lot, see a lot of places, meet a lot of people. You learn a lot of languages and cultures; you have friends in different places. The older and the better you get, the more you’ll learn. It also makes you mentally strong, if you have to fight staying in front of the peloton, training and racing hard. And you learn how to cope with disappointments. Itґs just a part of you…

PEZ: What did moving to Belgium mean for you?
BG: Itґs simple: In Belgium I can train better. The rolling terrain in Limburg and the longer mountains in the Ardennes mean a great training area. You know, training in Holland is all flat. In Belgium, I am also closer to the races, cycling in Belgium is a very big sport and it all happens in Belgium, so itґs better to be close to the fire… It’s also an advantage that there are many cyclists in Belgium, so itґs possible to train with a big group, which makes it a lot easier on long rides. Of course itґs difficult not to live with your parents anymore, but it was just a decision I had to make. Itґs only 300 kilometers, so if I want to be at home is only two hours in the car and I am there!

PEZ: When did you join your new team for the very first? How did the big names in the team welcome you as a young rider?
BG: I met them for the first time in November 2004. There was a team meeting in Amsterdam, just to fit clothes, shoes and other new stuff. It was a relaxed atmosphere and it was nice. Then there was the first training stage in January 2005, two weeks in Mallorca, Spain. Of course, everything was new, but I liked it. There were no problems getting in contact with the other riders. They were just ok, talking and laughing is everywhere the same I think. They helped me out in the first days. 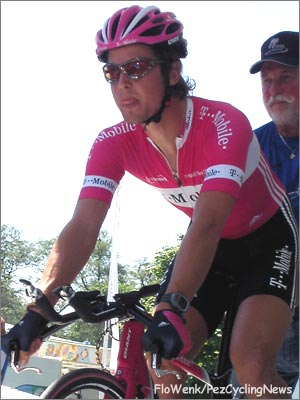 PEZ: Which races did you do up to now this season? And what did it mean for you to adapt to the different needs in an all-professional peloton?
BG: I started out in the end of January in Qatar. I did some pro races in 2004 but still itґs different. It goes fast! And it is hard! But in the spring season I was in good shape. I felt great and I could do my part of the job. Sometimes, of course, comes a bad time – I became a bit sick, kept on training and then there was my first dip. Then itґs hard to start racing again, if you are not in top shape – it’s just too hard. But you have to do it to become better. I did it and right now, I feel great again and I hope do make a good end of the season.

PEZ: How will your schedule look like for the following weeks? And what is your number one1 aim for this season?
BG: Next week I do the ProTour Race in Plouay, then I will take part in the Tour of Britain and later in the Tour of Poland. (Ed. Note: Bas did not start Plouay, but did start the Tour of Britain, coming in eighth in the first stage Tuesday) Right now, I have a busy schedule, but I like it. Racing makes me better: I have to race to feel good. I hope to perform well in all the races I do. Later in my career I can start picking out the races that suit me the best. Now itґs too early for that…I have to learn everywhere.

PEZ: Where would you like to see yourself in the year 2010?
BG: Itґs hard to say. I hope that I will become one of the best riders. I want to win a big classic race, like Paris-Roubaix or the Tour of Flanders. Thatґs my dream. To be in front in the cobble stone classics. But there is still a long way to go…

PEZ: Best of luck and lots of success for your debut in the pro circuit – and many thanks for taking the time to answer our questions!

Florian is an amateur road racer and PEZ-Man in Germany. Aged 27, he is physician and currently doing his Ph.D. in endurance training and testing, focusing on metabolic and ergospirometric parameters in cycling performance. You can contact him via [email protected] or have a look at his website www.florianwenk.com
Like PEZ? Why not subscribe to our weekly newsletter to receive updates and reminders on what's cool in road cycling?