You don’t know Eoin O’Donnell unless I introduce you. No one knows Eoin. No one has ever heard of him – can’t even say his name right (it’s Owen). He’s an unknown, a ghost in the twilight, a soldier hammering it out in the dark basement of Crunch, forging his pain into muscle and stamina on the iron anvil of U2, in the cold gray Chicago winter, every day, every single day.

Not true exactly, Eoin’s well known to some.

The manager at Crunch knows Eoin. About a year ago Eoin joined Crunch and started his training regime on their Schwinn stationary bikes. Eoin was breaking, on average, two bikes a week: snapped chains, stripped freewheels, cracked cranks. In front of a crowded gym Mr. Manager attempts a showdown, intending to throw Eoin out.

After Mr. Manager’s histrionics Eoin politely suggests a meeting in the office and behind closed doors says, in effect, don’t you ever embarrass me in public again. If you’ve got something to say to me, do it in this office, in private. You sell memberships to anyone that walks in the front door and you take their money knowing many of them will never come back. I’m one of the one’s that comes back . I’m sorry about your bikes, I don’t break them intentionally, but I plan on using the membership I have paid for. Mr. Manager soon saw it Eoin’s way and now everyone’s nice and chilly with lots of hellos and how do you dos.

R. Kelly Knows Eoin
Kelly works out the same time Eoin does. He shows up with his massive motorcade that takes up all of Wabash (1 Rolls Royce, 1 McLaren Mercedes, 1 full sized bus with tinted windows, 1 Land Rover Jeep), emptying out an entourage of trainers, bodyguards, sycophants, ladies, and three suitcases on wheels . As part of his workout, Kelly’d hit the bike for about an hour while his young lady (cough) would sit infinitely close and watch adoringly. 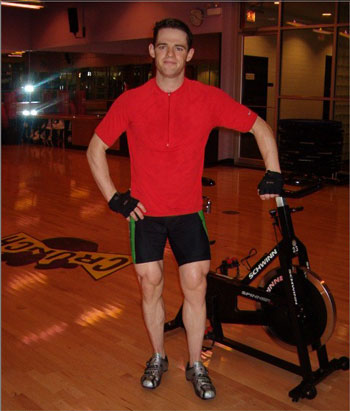 Wasn’t long before Kelly started wondering who’s this fool here every damn day, and asked about the bike closest to Eoin’s so he could ride next to him for a little, you know, inspiration. Kelly would try to match the pace but tire quickly and surrender to a slower spin: obviously getting zero spark from the fuel injected U2 petrol burning clean in Eoin’s engine, blasting bright in full surround sound.

Every hour Eoin takes 5 minutes off the bike and leaves the room to towel down and fill his water bottle. Once, during one of these breaks, Kelly undoubtedly snapped his fingers and one of his Sycophants responded with a trip to one of the three suitcases because when Eoin returned after precisely 5, his beloved U2 had been ejected and replaced by the latest and greatest CD from none other than the Chicago native himself, Mr. Robert Sylvester Kelly.

Schwinn Knows Eoin Well
Crunch’s Schwinns know Eoin. Outside his Mum, they probably know him better than anyone. Very intimate is their connection. Without knowing quantum physics it’s hard to know if they shriek or celebrate when he mounts, either way he’s about to fulfill their potential and celebrate their reason for existence.

Eoin follows a simple routine. He figures, quite accurately, his pace is 25 mph and puts in at least 4 hours a day to make 100 miles. Be advised, 100 miles is the very minimum; most days are 150,160, 175 miles. In one 24 hour period he rode 250 miles on one of these Schwinn Stationary bikes. Each hour is broken into 8 minute sections: 7 and a half minutes standing, pedaling at 25 mph, then 30 seconds of recovery pedaling in the saddle. At the end of the hour he takes that 5 minute break. Repeat, hour after hour, every day, every single day.

Bono Knows Eoin Too
U2 knows Eoin. Eoin works at a boutique hotel in Chicago which has become U2’s favorite hotel in the world for both the Elevation and Vertigo tours. Eoin is directly responsible for taking care of the band each night when they’re in town. We’re not talking zipping in and zipping out of Chicago en route to Des Moines or Buffalo or Cleveland. They love the hotel so much they stay as long as they can. It makes more logistical sense to fly to, say, Indianapolis and back than break camp each night. Because of Chicago’s central location, most dates are a short plane ride away, making the hotel an excellent command center.

What this means is, for the third time this year Eoin keeps Elvis hours, turning night into day, hoping Bono gets to bed before dawn so he can get to Crunch and do his miles. Like anyone, Eoin was thrilled at first, but like the first few months with a newborn, excitement gives way to fatigue, so it’s with a brogue fading from too much time away from home and too little sleep Eoin says “aye, the band came in last night and stayed up til 5, got about 3 hours sleep. But I got 150 in anyway.”

Phonak Knows Mr. O’Donnell
Before Eoin came to Chicago to work he studied in Switzerland. He rode his Bianchi around Lake Geneva’s 112 mile loop 5 days a week, every week, every single week. “I’d see lots of pros training out there. Rode with the Phonak guys about 3 times. You know, there’s such respect in cycling, especially when they see you’re strong enough to stay with them.”

Everyone Except Bike Racers Knows Eoin
Introducing Eoin O’Donnell: courageous as a cop; humble as a nun; manager of pain; competitive; half crazy; teatotaling and likable. He’s from Cork Ireland, spent 5 years as a Dublin policeman, before his move to Switzerland then Chicago. Winner of 4th and 3rd place in the Junior Mr. Ireland bodybuilding contest as well as 1st place in the Strongest Irish Policeman competition, Eoin gave up bodybuilding and took to cycling “like a fish to water. Such a beautiful sport, I’m tellin ya.” He’s 28 years old, 160 pounds and plans on: “winning a few races round here, and, I know you’ll laugh, but I want to make the Irish National Team.”

Eoin’s never raced in Chicago, the Midwest, North America, or anywhere else for that matter. Eoin’s never ridden a bicycle on a Chicago street. Hell, Eoin doesn’t even own a bicycle yet. No one in Chicago knows Eoin, not anyone that races bicycles anyway, but next Spring they will.