The elegant Basque city of San Sebastian, home to the Summer Court of the Spanish Royal Family in days gone by. It’s a long way from the grey North Nottingham mining-village of Harworth. In the summer of 1965 there was a link between these two very different places.

Harworth man Tom Simpson became World Professional Road Race Champion on the roads around the lovely Spanish city. No British rider before or since has stood on the podium for this event. In addition, Simpson won three of the five ‘monuments’ in cycling, Milan-San Remo, the Tour of Flanders, and the Tour of Lombardy. In modern times only one other British rider, Simpson’s friend and team-mate Barry Hoban has won a classic – Gent Wevelgem in 1973. A great ride, no doubt, but not a monument. 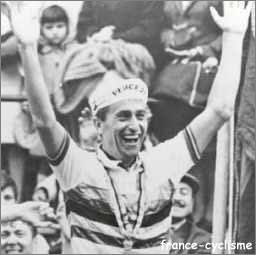 Simpson is Britain’s best ever roadman by a huge margin. Despite Simpson’s unquestionable brilliance, the British Cycling Establishment has done nothing to enshrine Simpson’s name. The reason is that Simpson’s name is forever associated with drug-taking.

When Simpson died, high on the slopes of Mount Ventoux in 1967 there were traces of stimulant in his system. The drugs on their own did not kill him, there were other factors – the intense heat, the brandy that Simpson had drunk to help a queasy stomach and, not least, his ability to drive himself beyond the pale. 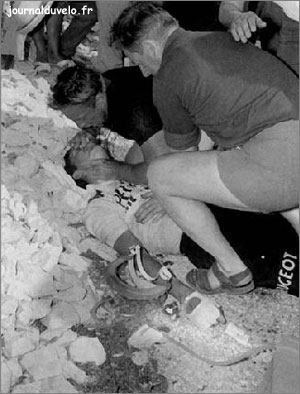 In the 60s, drugs were as much a part of the trade of being a professional cyclist as training, eating properly, resting and maturing tubulars. Yet Simpson is a pariah – Freddy Maertens despite his controversial career is treated with reverence in Belgium; Richard Virenque has been forgiven by the French, even Belgian Legend Eddy Merckx has tested positive. David Millar was surrounded by autograph-hunters at a recent Manchester track meeting.

To shun Simpson is hypocrisy, nothing less. 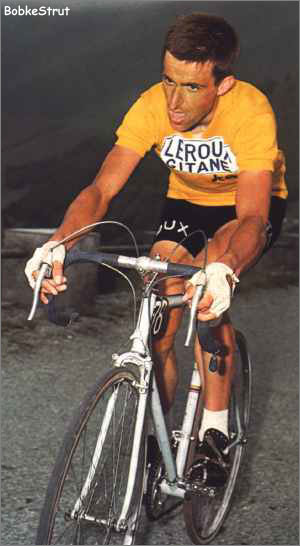 In Harworth, Simpson is not forgotten or an embarrassment. It’s not a bonnie or prosperous place, and despite the fact that the colliery still hacks coal from seams deep below the village, only 40 locals still work for UK Coal. Hatred for Mrs. Thatcher – “spiteful” and exasperation with Arthur Scargill – “arrogant”, still fester here. Despite the decay, visitors are treated warmly and there is still a strong sense of community.

Whilst British Cycling can find nothing in its ever deeper pockets to honour their greatest ever rider, Harworth and Bircotes Sports and Social Club certainly can. At the gates, an inscribed piece of granite bearing Simpson’s outline tells you that you are at the right place. In the pavilion on Scrooby Road a loving memorial to Harworth’s most famous son has been created. It’s just one big display case, but it’s packed with fascinating memorabilia. 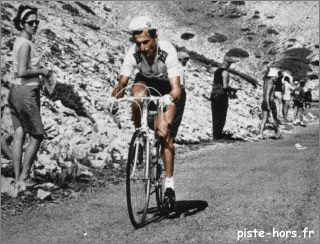 Centre-piece is a colour painting of Simpson in his rainbow jersey. It captures the essence of the man with that hooked nose and gleam of determination in his eye, The Gianni, woollen rainbow jersey he won that glorious day in San Sebastian is here, along with the GB jersey he pulled it over. His battle-scarred, 1967, Paris-Nice-winning Peugeot is here, along with the restored Gitane which took him to his Flanders win in 1961. The black and white photographs are especially sharp. Simpson’s winning-smile from the 1965 Tour of Lombardy brightens a dull Harworth Tuesday afternoon.

The photos are not just of Simpson’s glory days, there are shots of him as a young clubman, at drum-ups and taking part in a cyclist’s running race. The headlines from 60s continental and British newspapers and magazines remind you that this man was a star, earning Ј40,000 per year, around three quarters of a million pounds in today’s money. 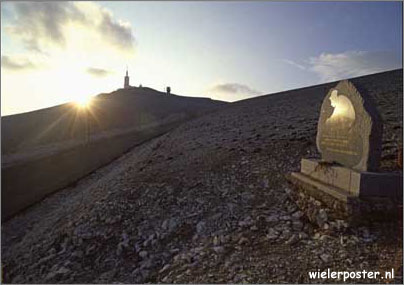 One of his famous bowler hats is on show, along with pieces as diverse as a menu for a civic reception in his honour in Gent to a silk, stars and stripes six-day jersey he wore. Inevitably, there are items from that tragic 1967 Tour de France – his ‘49’ frame number, one of his white GB jerseys with union jacks on the shoulders, a race manual and team mechanic, Harry Hall’s note book with Barry Hoban and Simpson’s gearing on that fateful day. Hoban rode 14:15:18:22:25, whilst perfectionist Simpson had obtained one of the then rare, new six-speeds and rode 14:15:17:19:21:23.

Just a minute or two from the pavilion is Harworth cemetery. Simpson’s polished black granite head-stone is well tended, and fresh flowers struggle to brighten the scene, which sits in full view of the pit winding-tower.

It’s a million miles from the glamour of the Via Roma in San Remo. After watching a brilliant Tom Boonen triumph in Madrid just a couple of weeks ago – just remember – Tom Simpson won that.

Riding With Lance: My Finest Dropping