The last time we spoke to Garmin’s Svein Tuft, he’d just finished a sparkling second in the 2008 world elite time trial championships in Varese behind Germany’s Bert Grabsch. A lot of kilometres have rolled under his tubulars since then – a contract with Garmin, a Vuelta, a Giro, and last week, another Canadian elite TT championship.

We thought that was as good an excuse as any to talk to the big man from Langley in British Columbia. When he took our call he was, ‘drivin’ through the Rockies,’ nice!

PEZ: Congratulations Svein, how important is the Canadian title to you?
Everyone who races wants a national title, it’s a hi-lite for me and I consider myself fortunate to be able to come home and race for the title.

PEZ: That’s a nice maple leaf paint job on your Felt, are you an equipment fanatic?
The guys at Felt said they had come up with a nice idea; when I saw it I was pleased with what they had produced. I’m pretty simple about bikes; it’s something that the team is big into so I don’t feel I have to worry about it. 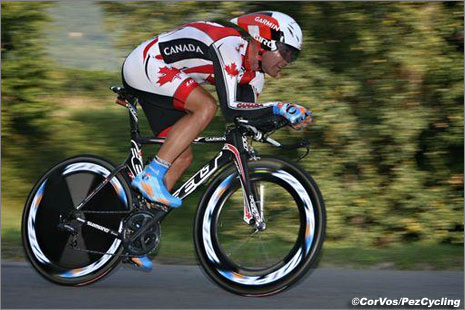 PEZ: How much time did you get to prepare for the TT?
I came back after the Delta Tour so I didn’t have that much time, but the Giro sets you up pretty good.

PEZ: Do you ride your TT bike a lot in training?
The way things are in Europe you’re pretty much racing or resting so it’s hard to get the chance to ride the TT bike in training.

PEZ: Do you time trial on watts or ‘feel?’
A bit of both, you have to gauge your effort on any course and the wind is always a big factor – take the Nationals, there was a short climb out of a river valley where it would have been easy to blow up pretty good if you hadn’t pre-ridden the course and planned for it. 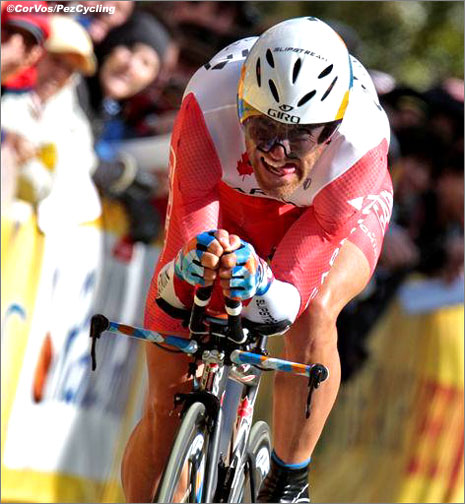 PEZ: TT advice for our readers?
Focus on your pain threshold, you have to dig deeper. The really good rides I’ve had I’ve had good focus, nothing else in my mind, other days my mind has been all over the place and I’ve done nothing,

PEZ: The 2008 Worlds TT was great for you, were you disappointed with 2009?
Last year was a whole new world for me, the Worlds came after a long, hard season and I was actually surprised that I managed 15th place because I have to tell you that I wasn’t feeling that good going into it. In pro bike racing you have to be realistic. 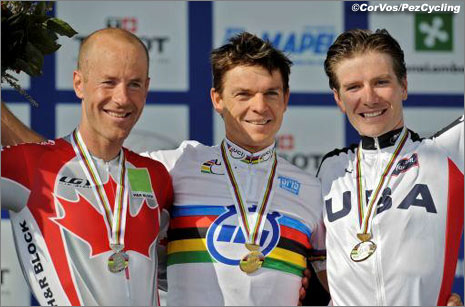 PEZ: Are the Worlds in Melbourne on the agenda?
For sure, I won’t be riding the Vuelta and the team will give me time to prepare at home.

PEZ: Tell us about the good bits of the Giro.
It was great the days where we set Tyler up to win; it’s a good feeling to be part of a team that’s taking control of the stage and is firing on all cylinders – very satisfying. And it was good just to be part of what was an epic Giro.

PEZ: And the not so nice bits?
The weather was pretty rough, there were days we had water up to the hubs with the flooding. And the mountains they throw at you – the Zoncolan, I’d never seen anything like that, before.

PEZ: How did you come out of the Giro?
I was surprised, everyone was feeling tired, but I was good. In the Delta Tour I felt like I had another gear, I had no ‘shut down’ period after the Giro at all – I wasn’t sleeping more than normal or anything like that.

PEZ: What are you up to whilst the Tour is on?
I’m enjoying being back in British Columbia; there are some good races coming up, including BC Super Week – and apart from the racing it’s good to meet my friends from the days when I was on the Symmetrics team. After that I have the Tour of Denmark and the Eneco Tour then I’m back in Canada for the UCI races in Quebec. 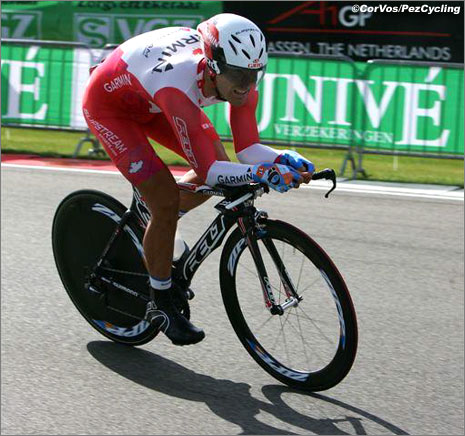 PEZ: And how are you settling in to Pro Tour life?
It’s something that takes a while to adapt to, one of the big things is that the races are 100 kilometres longer than in North America and of course the depth of field is much deeper. I have to say that 2009 was an eye opener and 2010 I still feel like I’m learning all the time – in fact, it’s been a huge learning curve.

PEZ: You used to be a man for taking off into the wilderness, has there been much of that?
I hope to get out on my mountain bike in the next little while – but the truth about being a Pro Tour rider is that racing and resting is pretty much the extent of your life!

***
‘Racing and resting’ sounds good to us! With thanks to Svein and wishing him good luck for the rest of the season.