PEZ: Congratulations, Rubens – obviously the parcours suited you?
Yes, they were perfect for me, it was two laps of the Swiss road race championship course, reasonably flat, not so hard and the temperature was good for me at around 22 degrees. 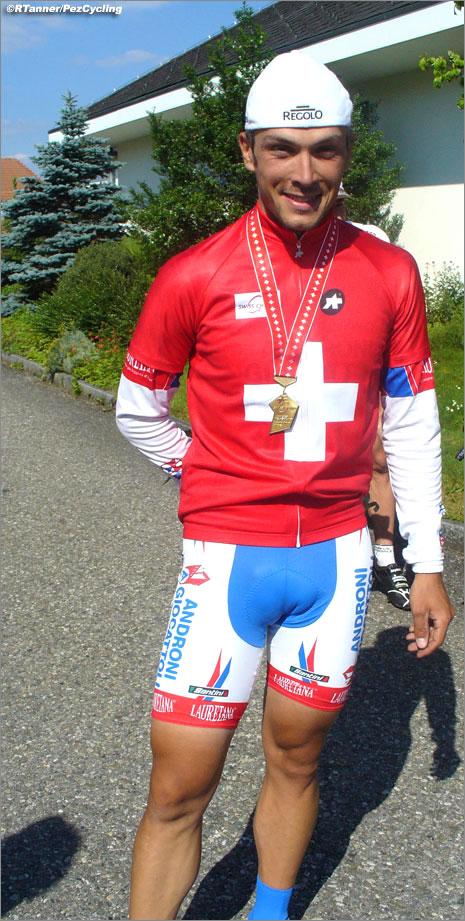 PEZ: Did you get time to prepare properly?
After the Giro I had one-and-a-half week of rest; I really needed that, then I started to train on my time trial bike – not long rides but of good quality. Then I did two races with the team in Northern Italy and came out of them in very good shape.

PEZ: Six day guy Alexander Aeschbach was second, that was a surprise.
Yes, he beat Elmiger by 40 seconds for the silver – but as you know he’s a track rider and it wasn’t such a bad course for a track rider – and he obviously has good condition because he rode strongly in the road race championships too. 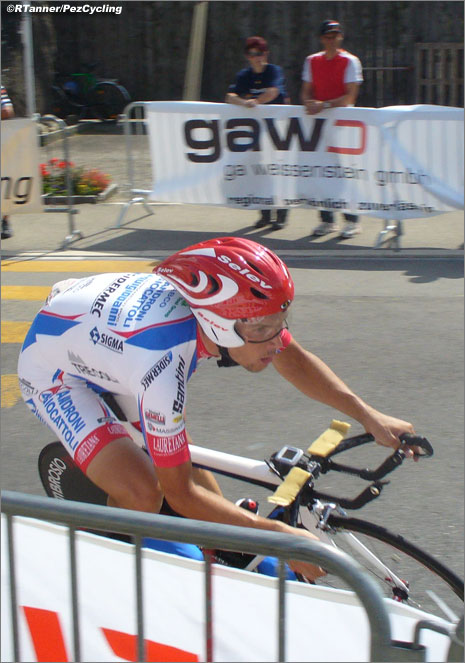 PEZ: Do you ride a TT on watts or ‘feel?’
I ride on how I feel, I don’t have SRM on my TT bike and besides I know early in the race if it will be a good day – I try to start at what I would describe as a ‘regular’ pace and then accelerate as the race goes on. On Wednesday I could feel super sensations – I found the first lap easy then gave it everything on the second circuit.

PEZ: Is there much difference between positions on your road and TT bikes?
They’re pretty much the same but I ride cranks that are 2.5 mm longer – the positions have to be the same because you ride time trials during stage races and you don’t want to have any problems. 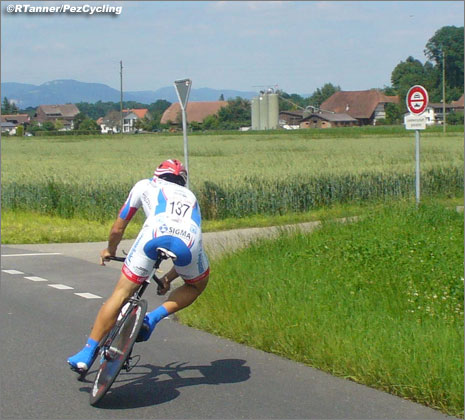 PEZ: Do you ride your TT bike much as part of normal training?
Coming into this race, two or three times each week, you have to get used to it and feel right on it. I had good motivation for the championships and was actually training twice each day – once on the road bike and once on the TT bike. I had really good feeling when I resumed hard training after my rest period out of the Giro.

PEZ: Give our readers some advice on riding a good time trial, please.
The time trials I’ve done well in, I’ve always started at a steady tempo and tried to lift it into the end of the race. Even if it’s only a 10 kilometre time trial, if you start ‘a bloc’ when you come to nine kilometres you’ll be feeling it and won’t have anything left for the last kilometre – and often that’s where the race is won and lost. So start conservatively – unless it’s a prologue, of course – and try to turn up the pressure as the race goes on. 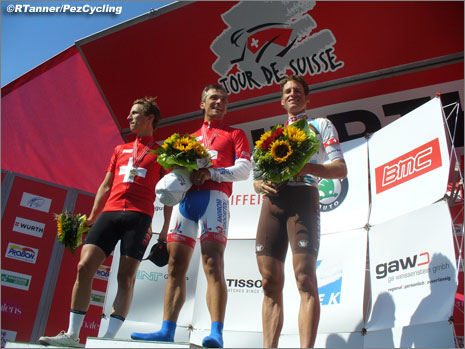 PEZ: How was the Swiss road champs for you?
It wasn’t that hard a parcours so there were a lot of attacks; I got away in a group of 20/25 but there was no collaboration and we were brought back, I tried three or four times but couldn’t get in a move that had the right composition. Elmiger chose the right moment; he went after eight-and-a-half laps when everyone was tired. I spoke to him at the time trial champs and he told me that the road race championship was a big objective for him. He’s a rider who is strong in the head and likes the heat, so it what was good day for him. Cancellara rode and was in the break but missed Elmiger’s move – it’s hard for riders like him and me who have no team mates in the race.

PEZ: How do you rate your Giro?
It was a good Giro for the team, with Scarponi 4th on GC for us. I was a little sad that I didn’t get a stage win, I was away with Lloyd when he won the stage – there were days in the race where I was stronger than him, but that day it was he who had more strength. Then there was my late attack at Cava De Tirreni where it was only because Evans and Vinokourov were fighting with each other that I was brought back – but all they did was set it up for the sprinters (Matt Goss won.) 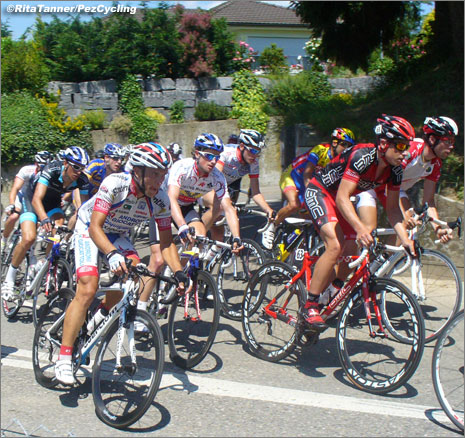 PEZ: How tired were you after the Giro?
This year was much harder than last, in 2009 there were maybe a couple of very hard days but this year they came one after another and the bad weather made it tough, too. I had two days off the bike completely then just did easy rides for another week and more, nothing more than two-and-a-half hours. It was in my mind that I had to be fully recovered for the Swiss championships.

PEZ: No Tour for your team, so what’s your plan?
I’m going to have an easy week after the championships then I have altitude training, here in Switzerland to prepare for the Brixa Tour and Tour of Burgos – two stage races that I like. Those races will set me up for the big Italian autumn campaign. 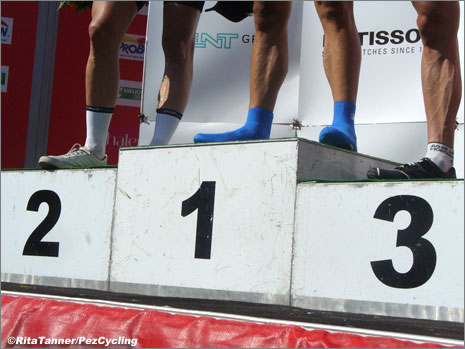 PEZ: What’s your late season programme?
I want to do a good World Championship time trial, I’d like to get into the top 15 then after that there are some race which suit me, like Paris-Brussels, the GP Fourmies and I have a job to do for the team in the Tour of Lombardy. Although I may ask the team if I can miss Lombardy because I have my last race of the season the next day – the Chrono des Nations and I’d like to do a good ride there, not be tired out of Lombardy. 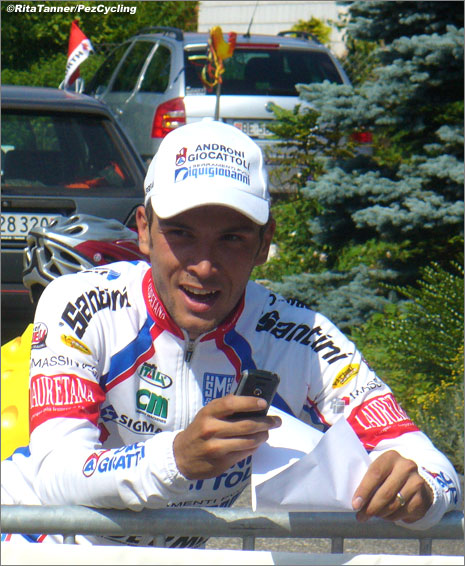 PEZ: Le Tour?
I’ve had a look at the parcours and it’s easier than the Giro, I think – but there are maybe four or five very hard days. However, I think that those hard days could be days for the breakaway and might not affect the GC – that day on the pave could even be a breakaway day. I think that there are lots of possibilities for breakaways but I think at the end Contador will be strongest – you could see that in the Dauphine he was not a top of his form but was going very well. Armstrong? He has to be watched but I think it will be Contador.

***
With thanks to Rubens for his time and insights – a man who proves that ‘nice guys can win.’