If there was a red dossard – like they have in the Tour – for the man who has spent most kilometres in the breakaway in the spring classics, there’s no question that it would go to Saxo Bank’s former world track champion, Michael Morkov.

Morkov won his first track medal in the Danish junior team pursuit championships in 2001; by 2003 he was national junior points champion and made the elite points his own the following year.

He formed a very successful partnership with countryman Marc Hester in the UiV Cup (U23 six days)- but it was with Alex Rasmussen that he won the U23 European madison title in 2005.

The following season saw him win national medals in the madison, TTT, pursuit, scratch and points – and he was now performing well at World Cup level in the team pursuit and Madison, with Alex Rasmussen.

In 2007 he lifted his first Worlds medal – bronze in the team pursuit – was second in the U23 Tour of Flanders and won his first six day with Rasmussen at Grenoble.

There was a rainbow jersey in 2009, with Rasmussen in the Madison, and the duo also won the six days of Copenhagen and Gent.

His Grand Tour debut came in 2010 in the Giro where a young Saxo team performed strongly. He again paired with Rasmussen to win sixes in Copenhagen and Berlin.

The Copenhagen six day hat trick came at the start of 2011, before he backed Alberto Contador to an emphatic win in the Giro d’Italia (later rendered null and void, ed.) 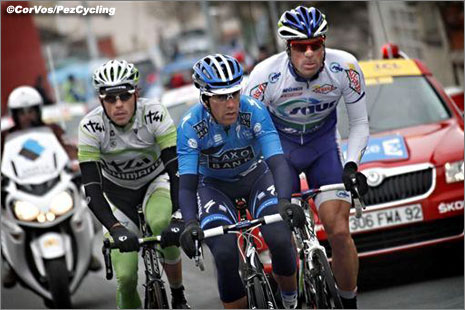 In the break during this year’s Paris-Nice.

There were wins too in Danish criteriums and a close second to Elia Viviani in a stage of the USA Pro Cycling Challenge in Colorado.

This year he’s been in the early break in just about every big race that matters – and Paris-Roubaix was no exception.

PEZ: What hurt the most on Monday, Michael?
Michael Morkov: My wrists, backside, my whole body – it was a tough day.

PEZ: Another early break for you.
MM: Yeah, it’s been a good early season for me – we don’t have a team where we can sit and wait for a captain to make a move so we must take our chances and be ahead of the race.

I’ve been in the break in four out of the five major races I contested – I missed out in Flanders but we had Anders Lund in the break for the team. 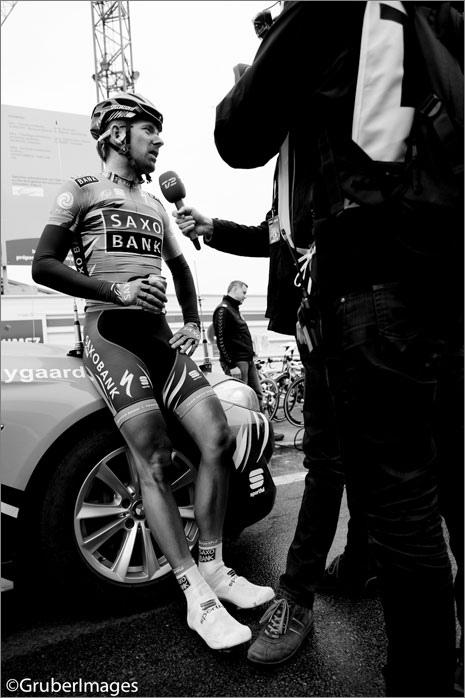 Morkov interviewed after the Hell of the North.

PEZ: What was the Saxo game plan?
MM: We wanted to save Matteo Tosatto early on, so he could follow the favourites – because of that we wanted a rider in the early break.

Matteo had a good race, he was always in the right place – he’s very experienced and that showed with his seventh place finish.

PEZ: I made it you were away for 120 kilometres?
MM: Yes, that’s about right.

That was quite late for the break to go and there were maybe more in it than the peloton would have liked, because it may have been difficult to control.

There were some strong guys in the break but the peloton never let us get more than about four-and-a-half minutes.

It was very hard into the headwind and I think that even with 20 guys working it would have been hard to get a sufficient lead to think about staying away.

The head wind just killed us and when we were caught I had no legs left, I just fell back through the groups.

PEZ: What’s the hardest sector?
MM: Definitely Arenberg, that’s a really nasty stretch of road, if you can call it a road – it’s more like a forest track, the cobbles are so bad.

I went in first to protect myself from crashes and make sure if anyone attacked I could cover it. 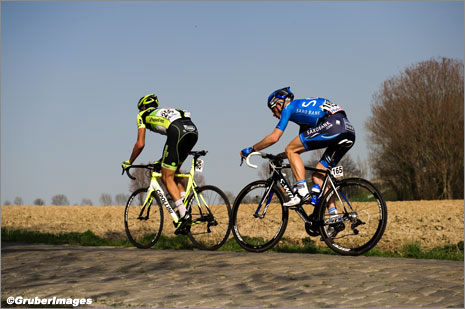 PEZ: That was wise; there was a crash in the break with one rider ending up in hospital, wasn’t there?
MM: Yeah, four guys came down – it’s very dangerous when you go in there in the peloton, but even with 12 riders it’s dangerous.

PEZ: How did you gain your knowledge of riding the pave?
MM: I rode Roubaix and Flanders as an U23 so I have my own previous experience.

But speaking to guys like Rolf Sorensen (Danish former winner of Flanders) you pick up advice.

And our DS at Saxo, Tristan Hoffman was twice fourth and once second in Paris-Roubaix, so he has good knowledge, too.

You want to stay as long as possible in the centre of the pave; if you’re there you miss the muck at the sides and the worst of the holes.

But when you get tired it’s hard to stay in the centre – it’s easier on the smooth strip at the side, but you run a much greater risk of puncturing or damaging a wheel. 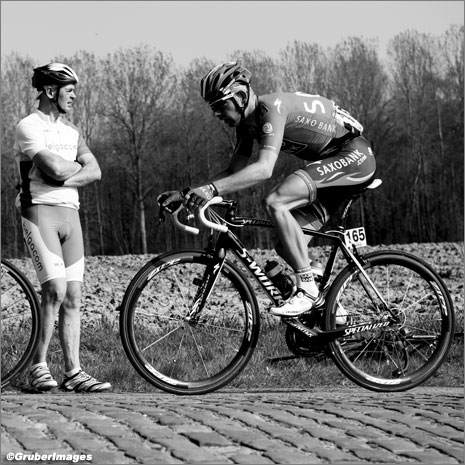 PEZ: Did you have any ‘mechanicals?’
MM: No, the bike was really nice – we had special frames for the race with a longer wheel base, more rake on the front forks, wider clearances and Zipp 303 wheels which are aero but very strong, with 27mm tyres for the pave.

But in the peloton it’s almost impossible – in the sectors you can’t even think about it and then between the sectors there are the big fights for position.

PEZ: Was Matteo Tosatto happy with seventh?
MM: Yes, the whole season we’ve been fighting to get a top ten in a Classic – I think we’ve been top 20 in every one – but this was our best placing so far. 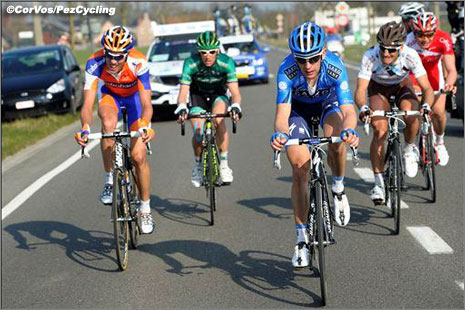 PEZ: What’s your opinion on Boonen?
MM: He’s been the most impressive guy in all of the spring classics – but it’s not just him, Chavanel and Terpstra have been winning, too.

QuickStep has been the most impressive team, that’s for sure.

PEZ: Did you do a recovery ride on Monday?
MM: I usually would but it rained.

The race damages your body and you have to rest and recover from that – I’ll do small recovery rides on Tuesday and Wednesday.

PEZ: What now?
MM: I have the GP Denain in France on Thursday and then a good break until the end of May, when I ride the Tour of Norway.

I did the best I could with 13th in the E3 and 15th in Dwars Door – and just a little disappointment that I could have had a better Tour of Flanders.

PEZ: And are you happy to be back on those smooth Tuscan roads, after all those cobbles?
MM: That’s true – yesterday I truly was in the Hell of the North.

It’s a great race and very exciting – but one you only want to ride once a year!

Chasing Roubaix 2012: One Last Day On The Cobbles