On the night Franco Marvulli won the 31rst six day of his career, he took time to give PEZ his views on the current six day scene. Marvulli’s first six day win came in 2001 when he took Grenoble with countryman Alexander Aeschbach. Since then he’s won 31 ‘races to nowhere,’ 19 of them with his legendary countryman, Bruno Risi. Grenoble, Moscow, Stuttgart, Aguascalientes, Fiorenzuola, Maastricht, Zurich, Copenhagen, Hasselt, Dortmund, Munich, Zuidlaren, Berlin, Turin, Tilburg and Bremen have all fallen to the tall man from Oerlikon at least once.

The notches on his top tube also include 43 Swiss track championships, five European titles between the omnium and madison, two world scratch titles, two world madison titles – with Risi – and in addition the duo took Olympic madison silver in 2004.

And whilst best known as a track rider, he’s won criteriums, road races – and even time trials.

PEZ: Remind us of the stats please, Franco.
Franco Marvulli: 30 wins (that would become 31 before the end of the night) with this race being my 105th start – Berlin was my 100th six day and since then I’ve ridden Copenhagen, Fiorenzuola, Grenoble, Gent and now, Zurich. 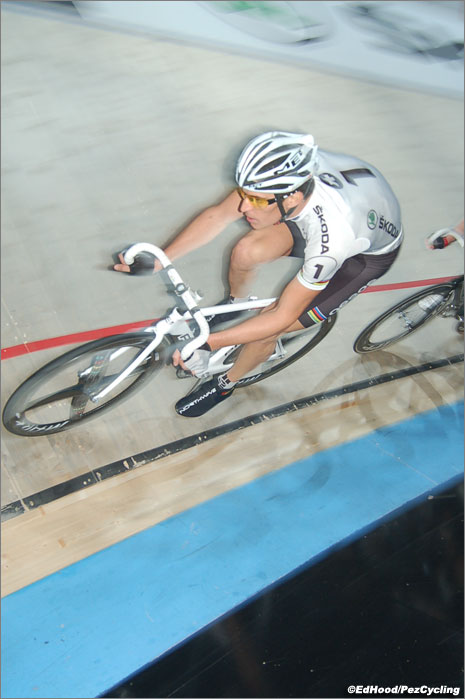 PEZ: You seemed a little ‘flat’ at Grenoble and Gent ?
FM: I see this season as being special, a season of revival for me – last season wasn’t the best due to illness.

I was second at Grenoble and that was great, I love that race and the support I get from the public there.

But I eased off at Gent after four days when I saw that Christian Grasmann and I couldn’t win – my head was already here, in Zurich and I didn’t want to go too ‘deep.’

Claudio Imhof rode strongly at Gent but paid the price I think – he was sick and couldn’t start here in Zurich.

PEZ: Which is your favourite six day – apart from Zurich ?
FM: I like the summer six day at Fiorenzuola because it’s different – outdoor on a big concrete track and it’s also special because Alexander Aeschbach and I won the European madison championships there in 2004.

The race has a character of it’s own and I’ve made a lot of friends there.

There’s no six day that I dislike, they all have their own character – I’ve never won any of the Dutch sixes, for example, but I like to race in Amsterdam and Rotterdam.

PEZ: It’s a long break ’til Rotterdam in January, how will you keep in shape ?
FM: I’m going to Australia with Marcel Barth, we’ll ride the Tasmanian carnivals and the Australian open madison championships – come back with a nice sun tan ! 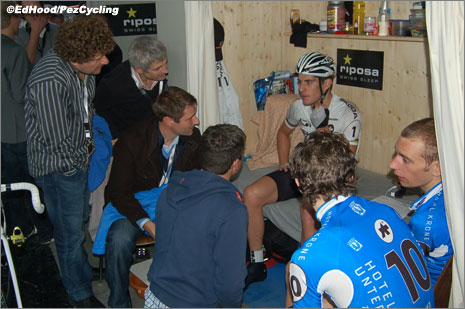 PEZ: The media and public attention you receive here is extraordinary – doesn’t it distract you ?
FM: It’s pretty extreme this year, yes – but then I’m the ‘local hero !’

But it’s all part of the game – it’s not just about racing, it’s about business too.

I know I have too many commitments, I run around crazy to radio and TV studios and don’t get enough sleep – but there’s a big audience here and I have an obligation to my sponsors, my friends, my family, my fans . . .

There’s a lot of pressure on my shoulders; but this is my six and I just love it ! 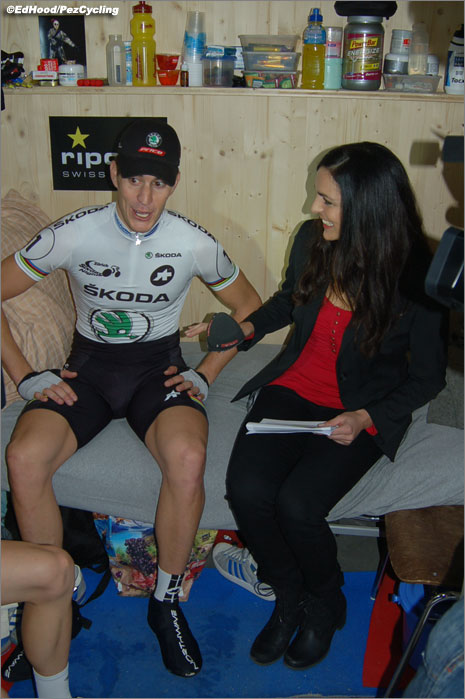 PEZ: Is this your first six with lljo ?
FM: No, we’ve ridden three times together, in the past.

We have two second places from that – we were actually leading in the finale at Munich one year and were only narrowly beaten into second place.

It’s great to be riding with him here in Zurich, he’s a real professional in the way he rides and the way he plays to the audience.

We don’t need to speak too much during the races – we have a very good understanding.

I’m a big rider, so it’s sometimes difficult to get a partner who gives you a good hand sling, but Iljo’s changes are excellent – I always think that if you’re on the attack and the sling is good, that’s worth half a lap, right away. 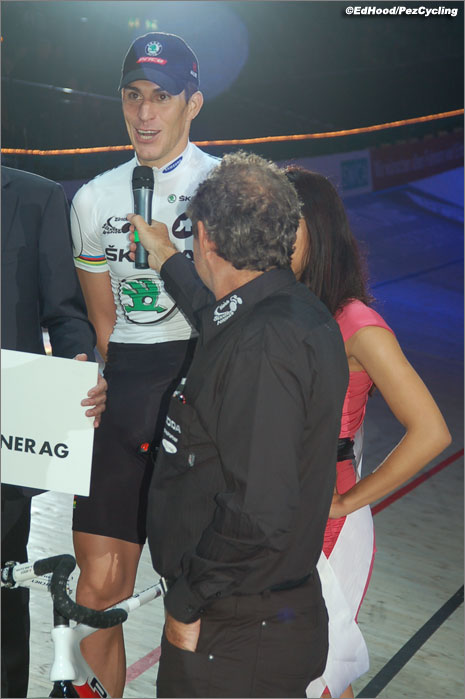 PEZ: The four nights format, what do you think ?
FM: I like it, you have to fill the stadium, this format isn’t needed at races like Gent and Berlin; but it’s a big hall to fill here at Zurich.

The racing is tougher because you only have to get through four nights, not six.

Grenoble is adopting the format, next year – maybe it’s the future ?

PEZ: What’s your take on the Olympic programme revisions ?
FM: The Olympic madison was a big goal of mine – and it’s been destroyed.

There’s only the omnium for the non-sprinters; but that’s for one of the team pursuit riders under the new rules.

PEZ: The UCI doesn’t pay much attention to the six days.
FM: There’s the UiV (Union Internationale des Velodrome) classement but the trouble is that not all of the six days (Grenoble is one) subscribe to it.

It would be good if there were a UCI six day points series – like the road rankings – that would definitely generate more interest. 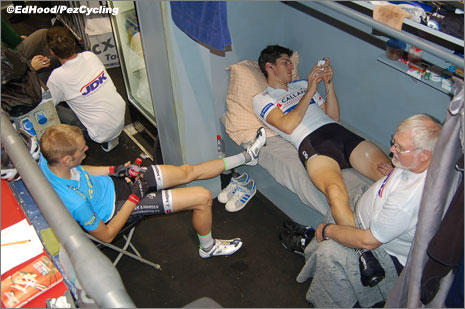 PEZ: What do you think of the Revolution one day series at Manchester velodrome ?
FM: They’re great events; it would be good though if they were extended over the weekend – it’s a lot of travelling for a one day race.

But one day or four days – both are much better that nothing !

PEZ: Do you ever see yourself involved in six day promotion ?
FM: I was involved in the organisation of the Aguascalientes six day in Mexico and I have in-put here at Zurich.

I have a lot of options open to me when I stop racing and that’s one avenue – but not something I’ll focus on whilst I’m still racing. 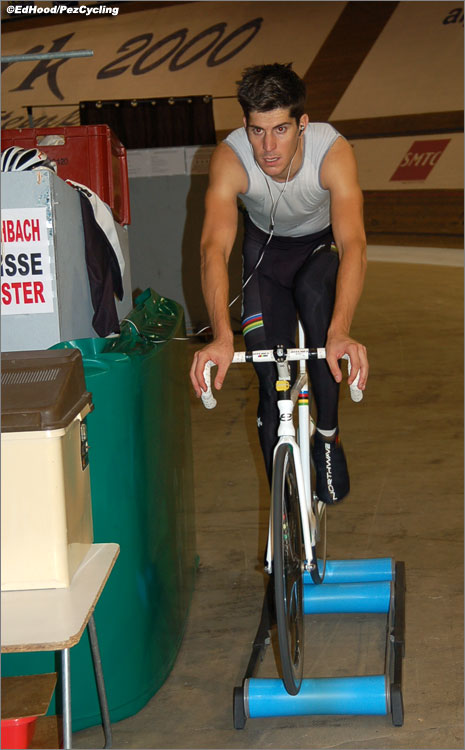 PEZ: When you look back on your career, do you have any regrets ?
FM: That part of my life is behind me, you could say that maybe if I’d been more focussed then I would have won more – but I like to travel, to enjoy life.

I’ve won pretty much what I wanted to, including Olympic silver so I can’t be unhappy.

PEZ: What’s still “to do” for Franco Marvulli, in cycling ?
FM: I want to stay healthy, enjoy my sport – the Olympic madison was a big goal, but that’s gone.

I’ve won 43 Swiss championships and I still love the feeling you get when you win one – you can’t buy that.

And a win here at the Zurich six days is worth more than money can buy.

PEZ: How many more seasons ?
FM: I might stop tomorrow or it could be five years; I don’t know – I’ll keep going as long as I still enjoy it.

Toolbox: When to Begin?