Rider Interview: We’ve been following the stellar career of Axeon Hagens Berman’s Adrien Costa and catching up with him for a chat between his top results. The problem this time ’round is that the victories are coming faster than Ed Hood can connect for the interviews! Here’s Adrien Costa – The Next Step.

We can’t keep up with this dude!

Before we’d even gone to print with this interview about his podium place in the Tour of Utah, ahead of former Dauphine winner Andrew Talansky (Cannondale & USA), that man Adrien Costa (Axeon Hagens Berman & USA) has gone and done it again, winning the time test in the world’s premier U23 race, the Tour de l’Avenir.

And that’s before we even mention his forthcoming stagiaire place with ‘super team’ Etixx – Quick-Step.

His comments on l’Avenir we’ll save for another day but here’s what the man PEZ has been following since his junior days had to say coming into the ‘Tour of The Future.’ 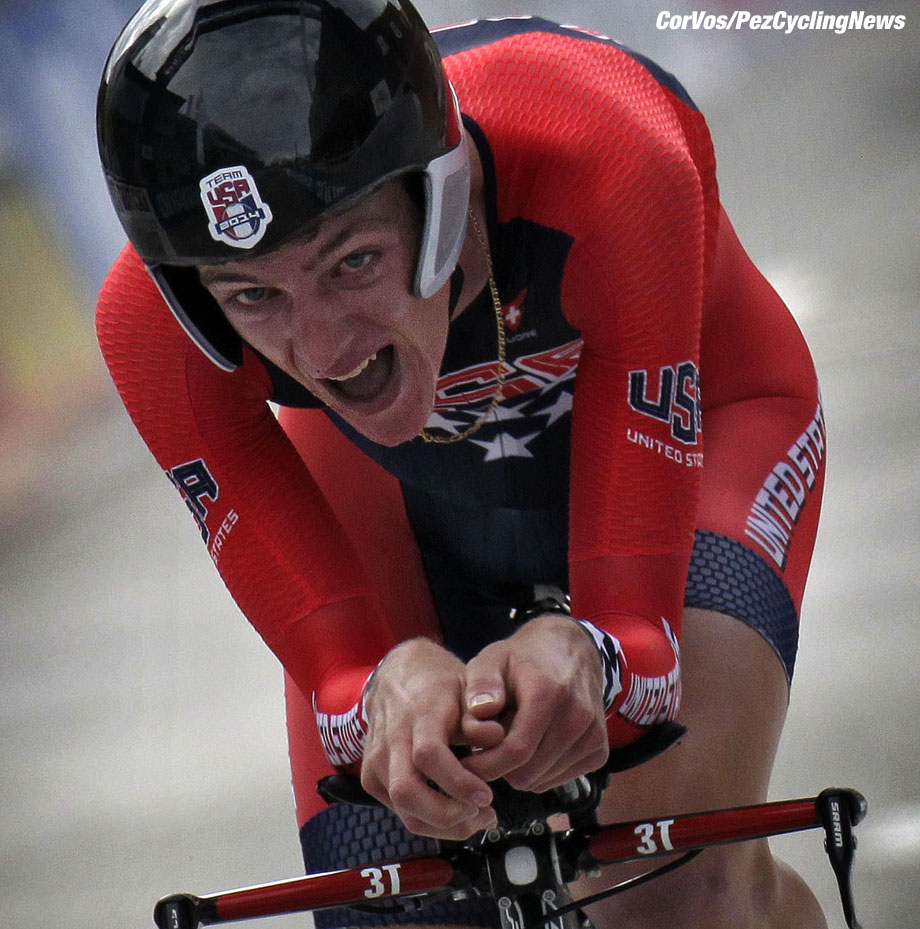 Costa: King against the clock

PEZ: The Tour of Utah was a bit of a roller coaster for you before you eventually nailed second overall – tell us about it please.
Adrien Costa: I was not quite sure what to expect going into Utah. I had gotten pretty sick and fatigued at the end of May and into June, and was just coming off a super chill three weeks at home. So I showed up in Utah with just a week of training in the legs. However I think I was in a good spot mentally: I wanted to race hard and was motivated to help the team. After being in the breakaway on the first day, I saw that my legs were pretty good. So I took Stage Two “easier” for some much-needed recovery. Then, on Stage Three with the climb of Mt. Nebo, I surprised myself again with really good sensations. From there, I was able to rely on my teammates’ strength and cohesion as well as Axel’s experience and advice to not get ahead of myself and take the rest of the race day-by-day.

PEZ: To beat Andrew Talansky is no mean feat.
It was an honor to race against guys of Talansky’s calibre. And for me, personally, it was just extra motivating – almost surreal to be with them in the heat of the battle, having only ever watched them on TV. 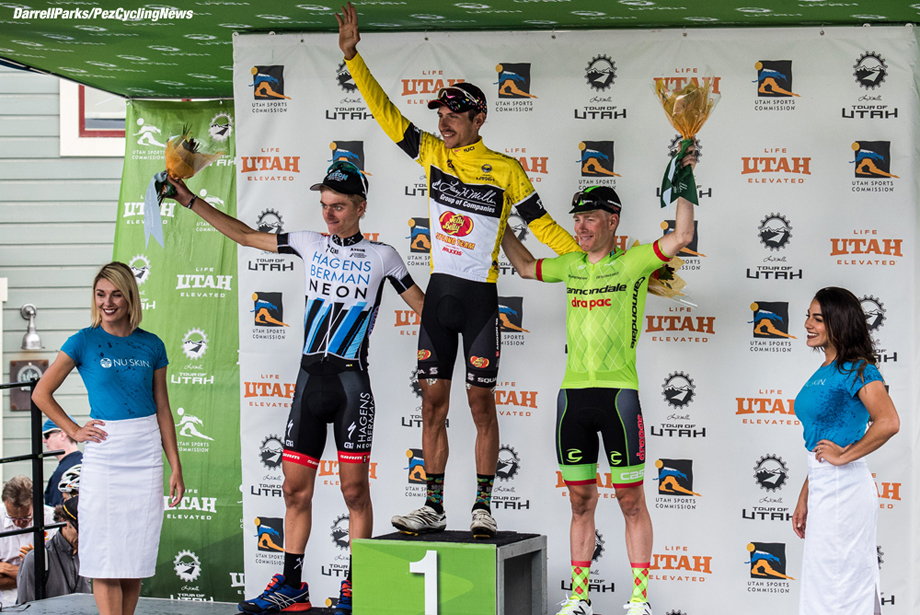 PEZ: Would you rate your Utah ride above your win at the Tour de Bretagne back in the spring?
I don’t think so. Bretagne is so much more than who can ride uphill the fastest. I think most people would agree that it is a real, tough, chaotic – and typical – bike race. So to be able to win there, on a course that doesn’t suit me as well as Utah’s long steady climbs, was really special and showed that I can be competitive in a number of different types of racing. That being said, it is always special to have a solid result in the U.S. as it is much more accessible and relatable for most of my American friends and supporters!

It was truly humbling to hear from so many people following the race on TV or through the social networks.

PEZ: Since we spoke after your Bretagne win, you were 3rd in Rhone Alpes Isere – another nice result.
Rhone Alpes was another typical, full-gas-all-day French race, like Bretagne and Savoie. And it was a really nice experience, with fun courses. Not Alpine passes, but lots of tough medium-length climbs made for an exciting race. In the end, Lennard Hofstede showed he was on great form and really deserved the win. It is no shame to lose to a competitor like him. 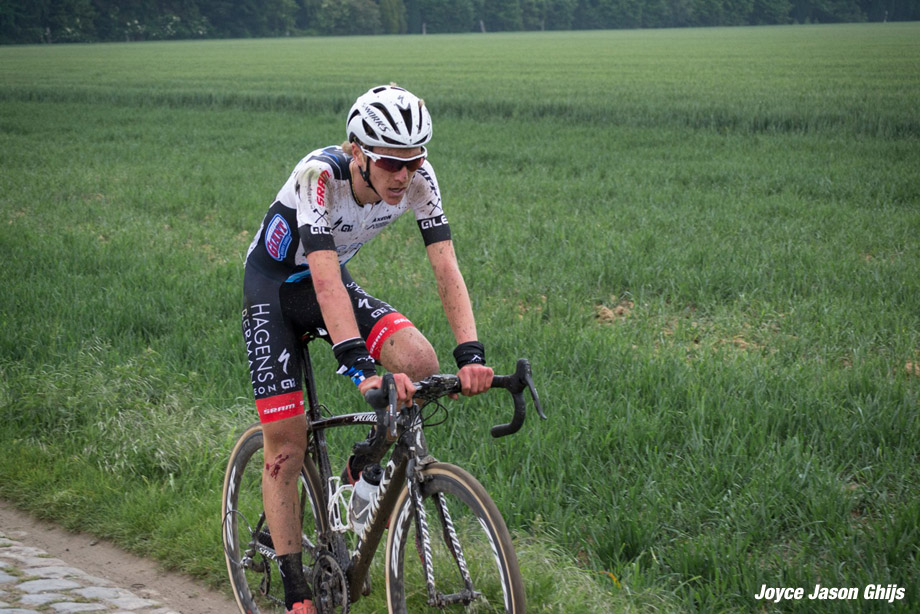 The mud and cobbles of Roubaix

PEZ: You rode the U23 Paris-Roubaix – what was that like?
I really wanted to race Paris-Roubaix after regrettably skipping it in the junior categories. Discovering the “Hell of the North,” riding on the velodrome, bouncing around on the Carrefour. It was a super cool experience and was nice to experience this “extreme” type of race, which makes everything else seem relaxed in comparison. We had a super strong team there with Axeon Hagens Berman. But unluckily, both Phil O’Donnell and Krists Neilands crashed out of the winning move in the finale, turning our race upside down. Alas, the unexpected is just part of racing Roubaix. I am looking forward to returning next year.

PEZ: In the Peace Race you were ‘DNF’ what was the story?
I think I must have caught something during Roubaix with all the mud and manure in our faces, because a couple days later I started having extreme stomach issues and migraines. Eventually, it was diagnosed as an intestinal infection. The worst did not hit until after the start of the Peace Race. I finished the first day, which ended up being a mistake, because I was not able to eat anything that night, just further weakening my body. 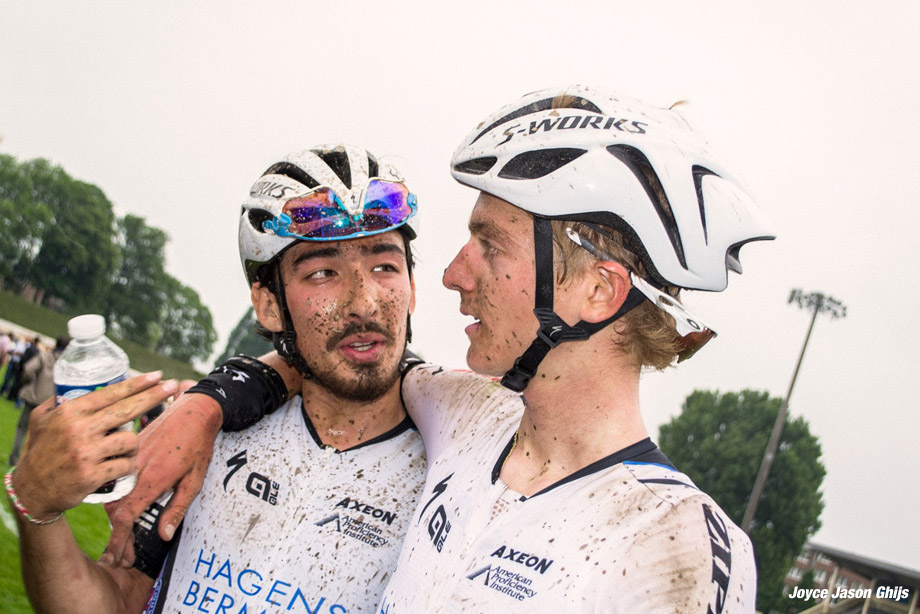 Happy to be in the Roubaix velodrome

PEZ: And you won the time trial in Tour de Savoie Mont Blanc.
The couple weeks after Peace Race were tough. My body just felt “off” and the sensations were pretty horrible the whole time. Being away from home since January and all the racing and travel caught up to me a bit and the sickness kind of pushed me over the edge. The first two days of Savoie were pretty brutal. I was giving everything I could to stay in the wheels and felt terrible that I was not able to contribute to the team. Somehow I came around somewhat in the last couple days and was able to contribute a little bit to the team’s success that week.

PEZ: You were 18th on GC there – was that a disappointment given your TT win showed you had the form?
It can’t be a disappointment considering the lead-in to the race. On top of that, my Axeon Hagens Berman teammate, Tao Geoghegan Hart, rode splendidly the whole race. He showed he had the form deserving the GC result that he achieved. So we were all behind him trying to dislodge Enric Mas, another classics rider. In the end, we couldn’t quite get rid of him on the last day. But we still walked away with two stage wins, second on GC, two runner-up placings and the team GC. So it was not a bad week at all.

PEZ: You had a quiet July. . .
I knew I needed time off after Savoie, and the national championships a week later confirmed that I needed a little more. I spent most of July at home, off the bike, taking time to straighten myself out physically and mentally. It is amazing how rejuvenating and refreshing it can be to hang out on the lake, go hiking, eat family food, and disconnect a bit from it all. I learned a lot of valuable lessons about cycling, and life, during this period that hopefully will serve me well in the future. 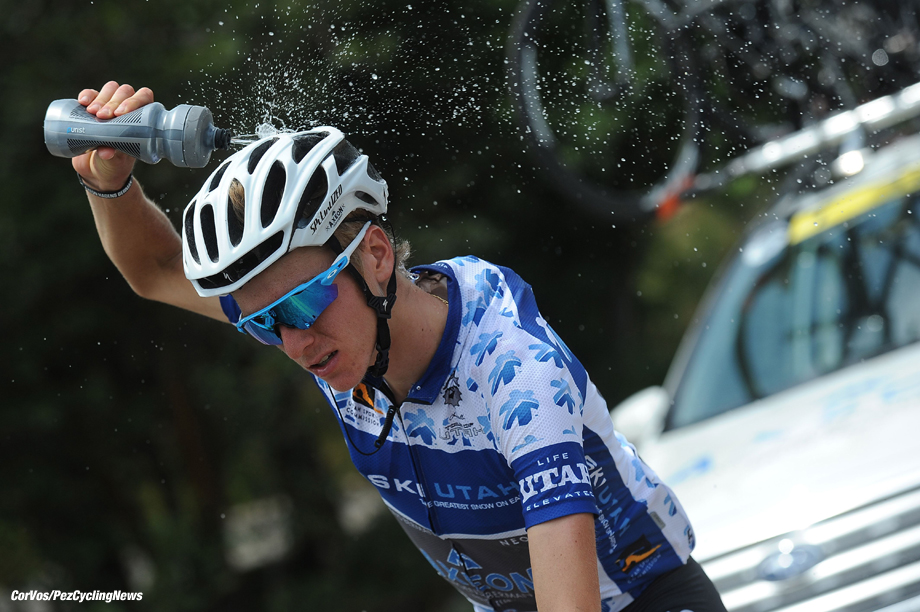 The racing was hot in Utah

PEZ: Tell us about how the Etixx – Quick-Step stagiaire role came about.
With my agent, Joao Correia, we have been lucky enough to develop a really great relationship with Etixx, starting with the training camp last December. When the opportunity to wet my feet at the next level a little at the end of the season came about, it was hard to resist. I am extremely grateful and honored in the belief they have in me and I am excited to go and learn and contribute as much as possible in my time with them.

PEZ: What is the procedure for getting your bike and clothing organized from them?
It is pretty straightforward since I am already riding a Specialized, it’s super easy, and the clothing goes pretty smooth as well. 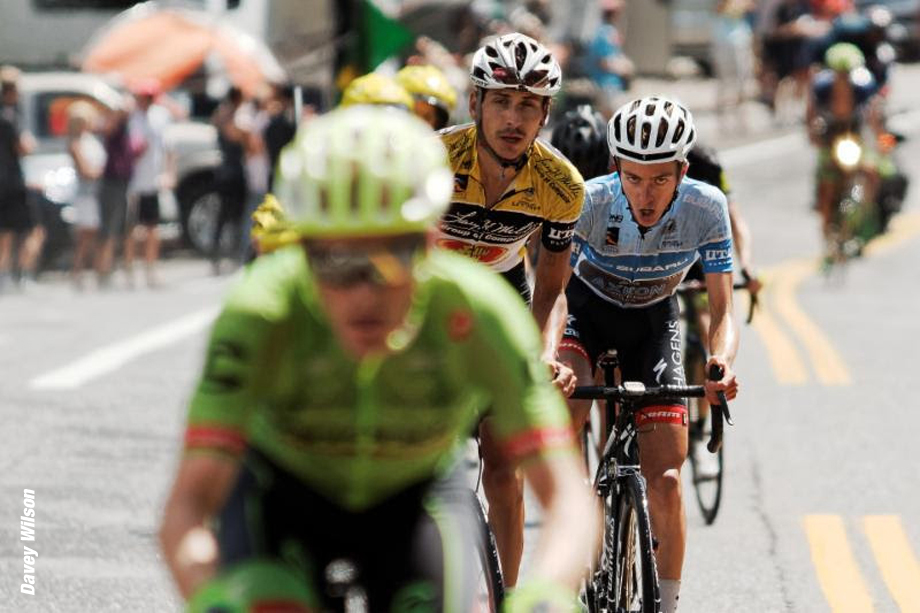 Keeping an eye on Talansky and Morton

PEZ: Do you know yet what your program with them will be?
I am not exactly sure but there should be some solid racing in September after the Tour de l’Avenir.

(PEZ believes that he will ride: the Tour of Britain and two Belgian semi-classics, the GP Impanis and the GP Wallonie.) 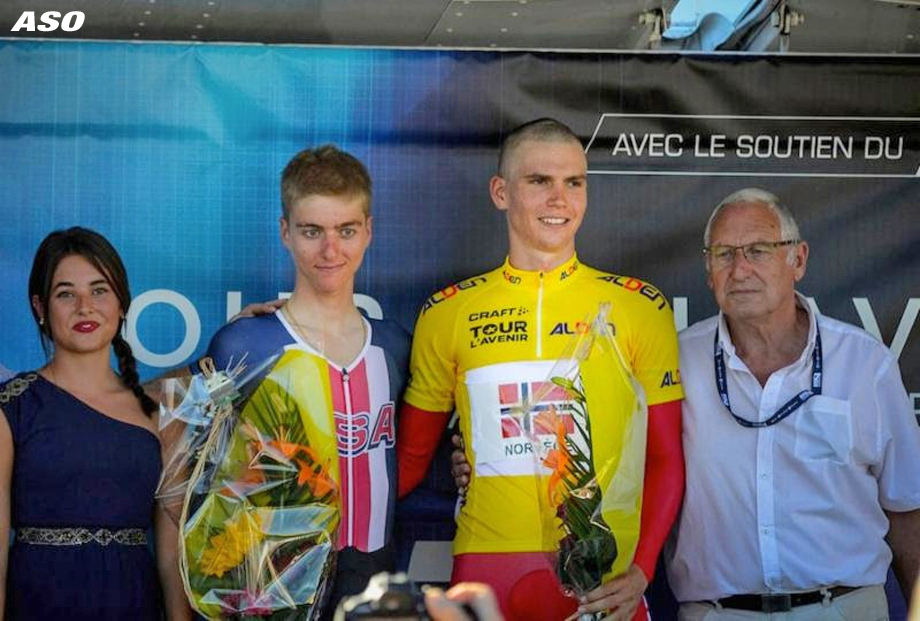 PEZ: For the Tour de l’Avenir, (which started Saturday), what is the expectation?
With Team USA, we are going with one of the best teams that we have had in years. It’s super motivating to be a part of such a talented group. I think we have plenty of guys that can be there deep into the mountain stages. We will take it day-by-day, but it should be a good race.

PEZ: Are The Worlds on the radar – TT and/or road race?
I am not thinking ahead that far quite yet, as there are some big objectives coming up soon and I prefer to focus on one race at a time. That being said, it would be a privilege to represent USA at the worlds and hope to have the opportunity to give it my best shot, especially in the time trial.

# Given his l’Avenir TT win we’d be awfully surprised if this young man isn’t on the U23 Worlds TT start line – we’ll keep you posted. # 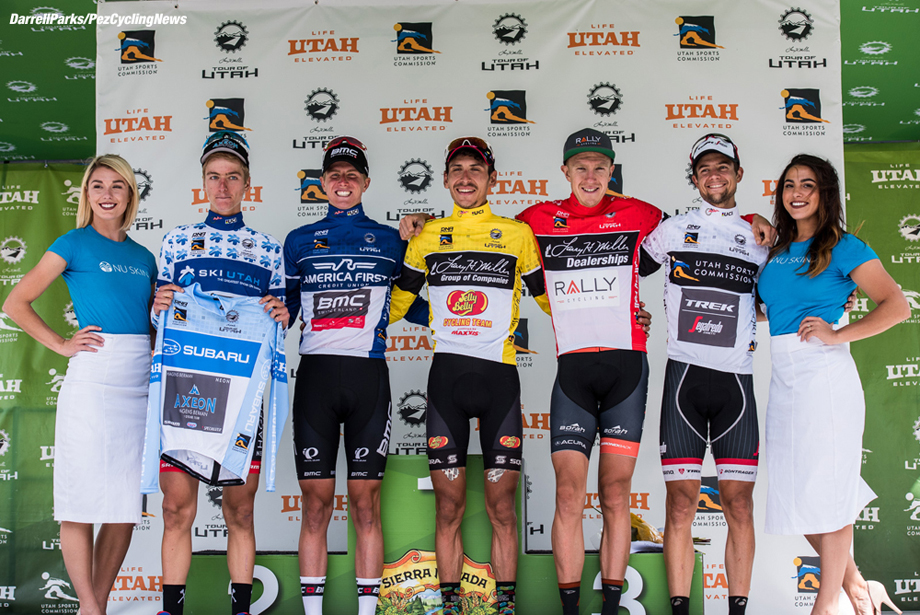