Rider Interview: When our friend Xylon Van Eyck at Corso Sports Management told us they’d taken on rising chronostar Adrien Costa we thought we should have a word with the young American who was second in the World Junior Time Trial Championship in Ponferrada, only losing out to German strongman, Lennard Kamna. But there’s a lot more to this eloquent young man than a Worlds TT silver . . . .

PEZ: I believe you spent a lot of time in France when you were younger and that inspired you to get into the bike?

That’s correct. I have family in France, and so was exposed to the sport through the Tour at a very young age and was quite immediately obsessed with it. I remember we would watch all the Tour stages on TV and then I would go out on my mountain bike and act out my own Tour de France on the local trails. Although I played soccer pretty competitively for quite a few years, my true passion was always the bike and I don’t think that can ever change! 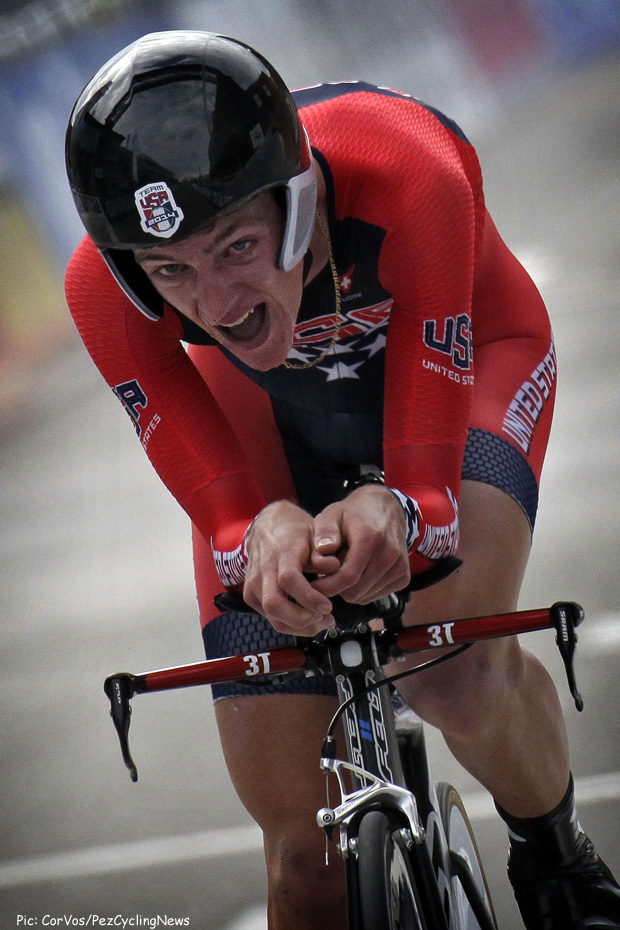 PEZ: What was the breakthrough result to get you on the US team?

I don’t think there was a single “breakthrough” that got me on the US National team, but it was more of a process through their development pathway.
From various race results in my 1st year in the 15/16 age group, I went to the National Talent ID camp, where my test results there allowed me to race in Belgium with them last year for three weeks, where I won and placed in a few kermises.

The progression from that to the Junior National team was natural as long as I kept getting results in the US early this past season.

I was on the Hagens Berman U23 team this year- a new team that sort of reincarnated a long standing elite team – and it was a good experience. We had good support and great exposure to new off the bike training methods and such, as well as a great domestic racing schedule which allowed me to race Redlands and the Tour of the Gila, amongst other good US events.

However in 2015 I will race for Cal Giant Cycling Team, a respected elite team based locally for me out of Northern California, with an incredibly strong roster, a great domestic racing schedule, and amazing support with Specialized and all the other sponsors. (notably Andrew Talansky rode for Cal Giant earlier in his career, ed.)

PEZ: Tell us about your win in the Tour du Pays Vaud in Switzerland please.

The Tour du Pays de Vaud was only my second ever European UCI race (first ever Junior one) and I had my eye on it for a while as it suited my characteristics well with lots of climbing and a good time trial. We had a super strong team there, and we blew it apart from Stage One.

The next day, I won both the summit finish and time trial, which left us to play defence on the final day. It was far from being an easy task on the very undulating stage, but the team really came together, keeping the group together over every climb, resulting in my first UCI 2.1 win!

We had two on the final overall podium, the KOM jersey, and white jersey, and celebrated with a very nice stay in Aigle after the race before refocusing for the rest of the trip.

PEZ: And you won the TT in Abitibi – the ‘Junior Tour de France’

That comparison might be true if they added at least one hill during the whole week in Canada! But on a more serious note, it was a great race with some hard crosswind racing against stiff competition from the Danes and French, among many others.

The TT was my main focus, not only because of how it always proves decisive in the final GC, but to test my legs against some of the best in the world leading up to Ponferrada. I was extremely happy to win that very fast TT, and it put us in first and second overall. Unfortunately a big crash the next day took out the majority of the top five on GC, completely reshuffling the overall classification for the rest of the race.

PEZ: Tell us about your preparation for the Worlds TT Champs.

After Abitibi I flew straight to France to take a week off and enjoy some relaxing time with my family. After that, I began training when we went to the Alps for 10 days; which was one of the coolest places I’ve ever been.

Unfortunately I got a little tendon injury in the last couple days (warning – do not do a nine kilometre climb straight out of the door!) which made me have to really back off for a couple weeks, which wasn’t easy to do with the Worlds so close. Thankfully I got over it just in time and had a couple good weeks of training back at home before flying back to Europe for worlds.

PEZ: Ponferrada, silver, but Kamna was out of reach . . .

I was super ecstatic to come across with the best time and watch it hold until almost the very end – but it was just a tad disheartening to see Kamna come through 45 seconds faster!

However, he had been exceptional all season long and was the outright favourite so I could only be proud of my ride and happy that I was able to give it my all and come home with a medal, following in the footsteps of quality riders like Phinney, Craddock, and last year, my good friend Zeke Mostov. 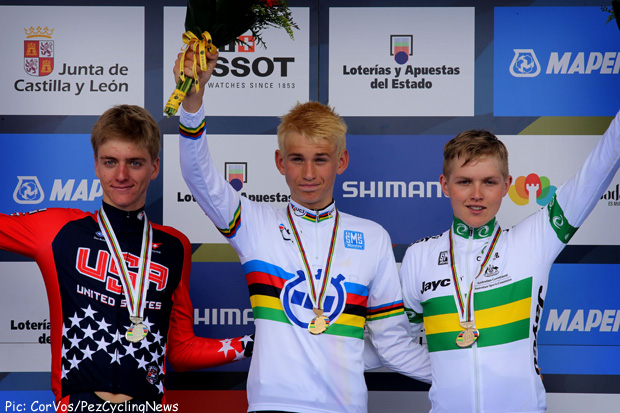 Yes, that is for sure the big goal of next season, but I am keeping my head on my shoulders and not getting too ahead of myself.

It is definitely the opportunity of a lifetime, especially with the Worlds being at home for the first time in 30-some years, but I also must remind myself that life goes on beyond this one race, and even more so beyond the bike, so if things do not go perfectly, it is far from being the end of the world.

PEZ: Is it restricted gears for the Worlds, which ratio?

We will have the usual international gear restriction for juniors of 52 x 14.

PEZ: Tell us about your TT bike.

I rode an “old” Felt DA from the Garmin team this year but this upcoming season I will be aboard the very best; the Specialized Shiv with full Zipp wheel setup, which I am very excited about. 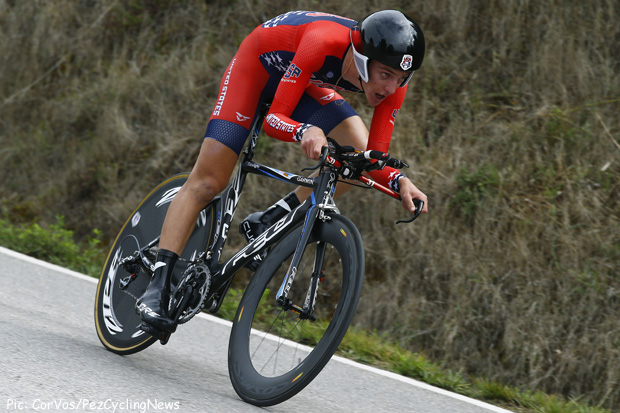 Adrien putting his ‘old’ Felt to the test in Ponferrada

PEZ: Do you have a coach?

I have been coached by Harvey Nitz (former top US track rider, ed.) since 2011 and it continues to be an extraordinary relationship.

Harvey really understands the importance of not only riding with your head, but with your heart, and stresses that cycling really is an art form, in which the artist is ultimately the one who makes the infinite, daily executive decisions and learns from his finely tuned perception of what he feels when working.

Many people have referred to his coaching as old school, but I feel that too many people think that training and racing is as simple as reading pages out of a “how to be good at bikes” textbook.

PEZ: What’s the winter plan and when does the season start in 2015?

I took some very much appreciated time off starting right after the Worlds road race then did some good hiking, mountain biking, and surfing to slowly wake the body back up!

I also began college, a year early, at UC Santa Cruz, where I will study for the fall and winter quarters before taking the spring off to race.
I am currently planning on slowly ramping my riding back up right about now, but still going to enjoy things you can’t (or shouldn’t) do during the season.

My first race is the traditional San Bruno Hillclimb on January 1st, so I need to be peaked for that! On a more serious note however, after a few good NorCal races in late February/early March, my first race of consequence should be the NRC Redlands Classic in April.

PEZ: Do you have any role model rider(s)?

I do not necessarily have any riders I idolize, but I admire both Alberto Contador and Bradley Wiggins. Contador exemplifies riding with your heart, never giving up, and always giving it 110%.

Wiggins has shown that with enough dedication, it’s possible to do anything, from being a track world champion, to winning the Tour, being competitive at Paris Roubaix, and being the best time trial rider in the world, which I think is quite inspiring for many young riders.

PEZ: Worlds Junior TT apart what else are you looking for from 2015?

My season will really revolve around international junior events, and although I haven’t finalized my schedule with USA Cycling yet I think I’m going to do the Peace Race, along with doing Vaud and Karlsberg again, which will give me lots of opportunities in big Nations Cups races.

After that, I’ll come back to the American continent for the Nationals and Abitibi, which should round out a really great early season before Worlds.

PEZ: What’s the ultimate goal in cycling for you?

I don’t think that any of us young riders would ever mind winning the Tour and for me, it’s the most beautiful, historical, and hardest stage races like the Giro that really attract me.

It would be a dream for me to be competitive in these races that combine climbing and time trialling, my two favourite disciplines, but as long as I can make a living simply riding and racing my bicycle throughout the world, travelling to diverse and beautiful places that I would otherwise never see, I won’t be complaining.