Rider Interview: 25 years-old and in his second WorldTour team, Harry Tanfield is cutting himself a fine career as a professional cyclist. Ed Hood talks to Harry about how he’s handling the COVID-19 lockdown and what next. 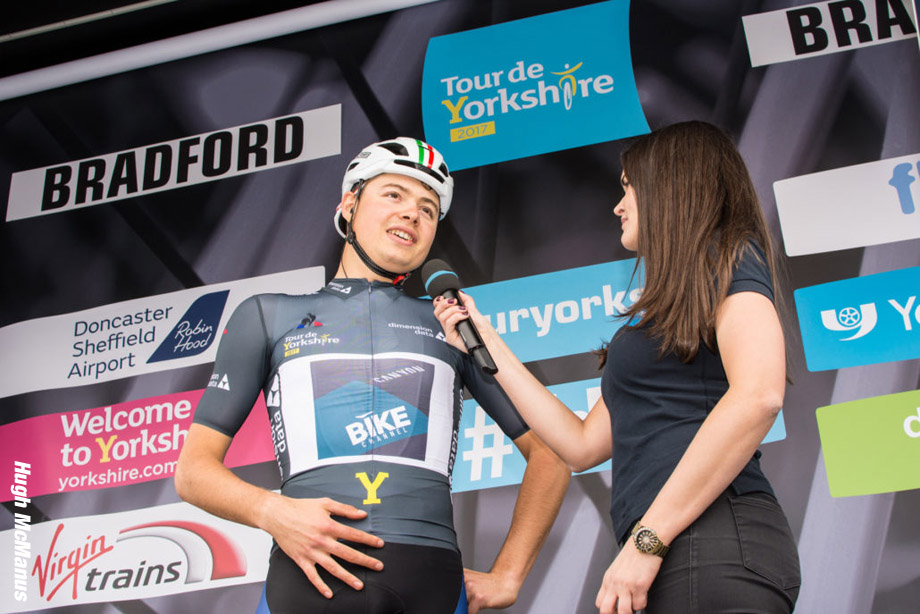 Englishman Harry Tanfield has come a long way since Martin Williamson and I first encountered him racing in the ‘Gordon Arms’ Hilly Time Trial in the Scottish Borders back in 2014, riding for KTM. But before that he’d achieved a top 20 finish in the Junior Paris-Roubaix in 2012. In 2015 in the colours of JLT Condor he finished in third place in ‘Britain’s answer to Paris-Roubaix,’ the Rutland Melton International Cicle Classic.

Season 2016 saw much criterium success in the UK and a stage in the Tour de Poyang Lake in China. With Bike Channel for 2017 there was another Asian success with a stage in the Tour of Quanzhou Bay; more home criterium success and some strong results in Belgium, among them third in the St-Elooisprijs in Ruddervoorde and second in the Vlaamse/Antwerpse Havenpijl. In 2018 there was success on the track with a World Cup win as part of Team HUUB team pursuit squad in Minsk and a he took the British individual pursuit crown. 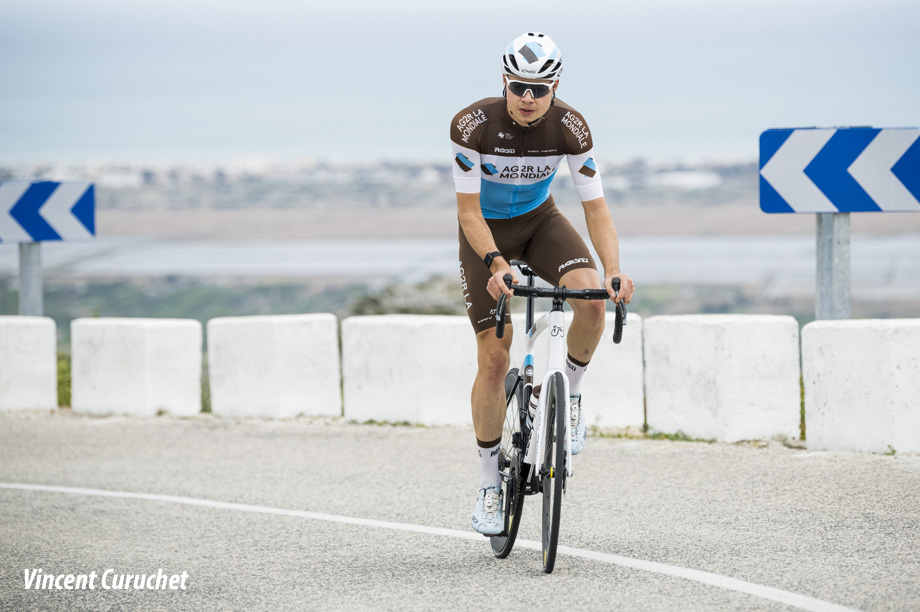 Against the watch there were silver medals in the British individual time trial championship behind Tour de France winner, Geraint Thomas and in the Commonwealth Games behind multi-talented Aussie, Cameron Meyer. Whilst on the road there was a terrific Stage One win in the Tour de Yorkshire as well as two strong second places in The Netherlands, in the Ronde van Overijssel and Midden Brabant-Port Omloop. He signed a two year deal with WorldTour outfit Katusha-Alpecin at the start of last season and raced from the Mallorca ‘training’ races in early February through to the Tour of Guangxi in late October.

But the team folded at the end of 2019 with Tanfield moving across to French World Tour team AG2R-La Mondiale. We caught up with him recently:

PEZ: The important questions first, Harry – what about those brown shorts?
Harry Tanfield: I like them, they’re nice and the kit is of very good quality, I rate it. 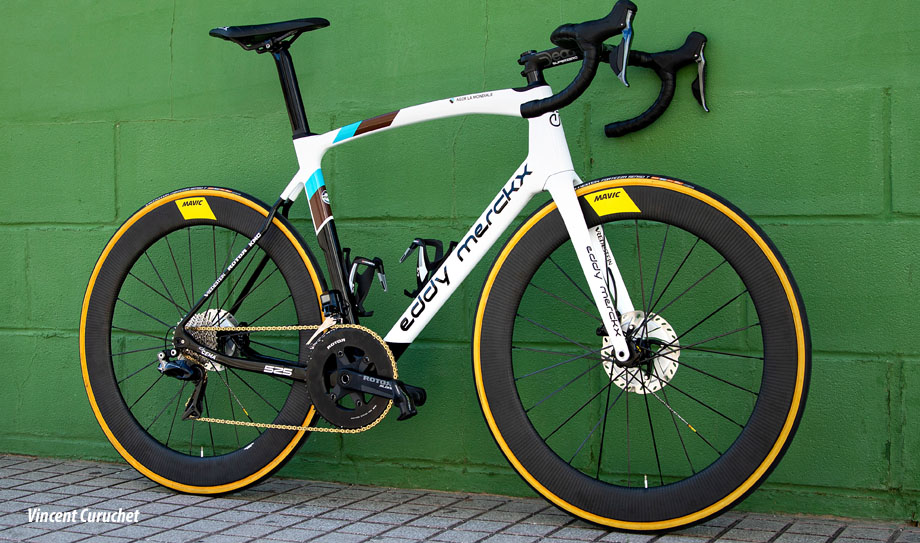 PEZ: How much hassle is it changing bikes again?
It is what it is; but a bit of a nightmare to get a frame with geometry to suit me. We ride Eddy Merckx frames but they’re actually Ridley Heliums – Ridley bought the Merckx brand. Most of the tall guys on the team ride a ‘large’ frame but the top tube on those isn’t long enough for me, so there’s just me and one other rider need an ‘extra large.’ But even then I have to ride a 150 mm extension. 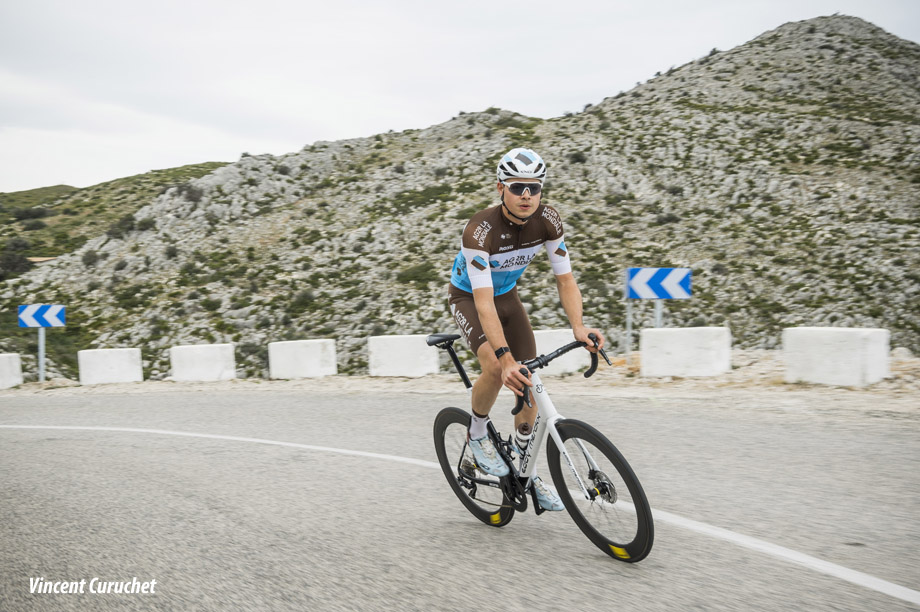 PEZ: Lock down; have you been ‘Zwifting?’
I’m at home so I can go out solo or with my brother Charlie [former World Team Pursuit Champion and British u23 iTT Champion who rides for British continental team, Canyon DHB Soreen, ed.] so it’s good I have a training partner. I haven’t done any Zwift stuff, the team excuses those of us who can get out on the road; it’s only those that are completely locked down who have been doing Zwift with the team. But it’s something that I might start to do. 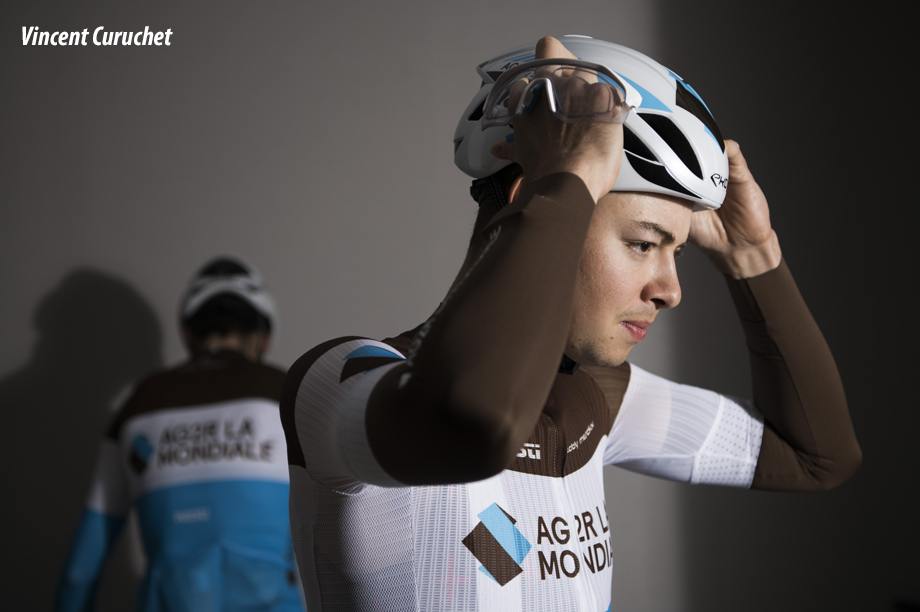 PEZ: Is there a team WhatsApp group?
Yeah, they keep everyone updated, they’re talking about ‘phases’ – with phase one being the French guys getting out on the road again [this is now in effect, ed.] and stage two will be the implementation of training camps, perhaps in July? But it’s all hearsay right now, the UCi has a new calendar out but it all depends on how the different national governments rule. In Belgium I believe mass gathering events are banned until the end of August? The National Championships are all now scheduled for the end of August but again we’ll have to see what the authorities say. One of the problems is that our AG2R Service Course is locked down so we can’t get any clothing or nutrition products we might need; and I don’t have my time trial bike, I’ve had to cobble one together so I can do TT training.

PEZ: How does AG2R compare to Katusha?
It’s more organised and more thought through but it has a nice feel, friendly. The Katusha guys were all decent lads but it was a bit cliquey. Here at AG2R most guys are French so they all get along and most speak English so it’s more homely here. 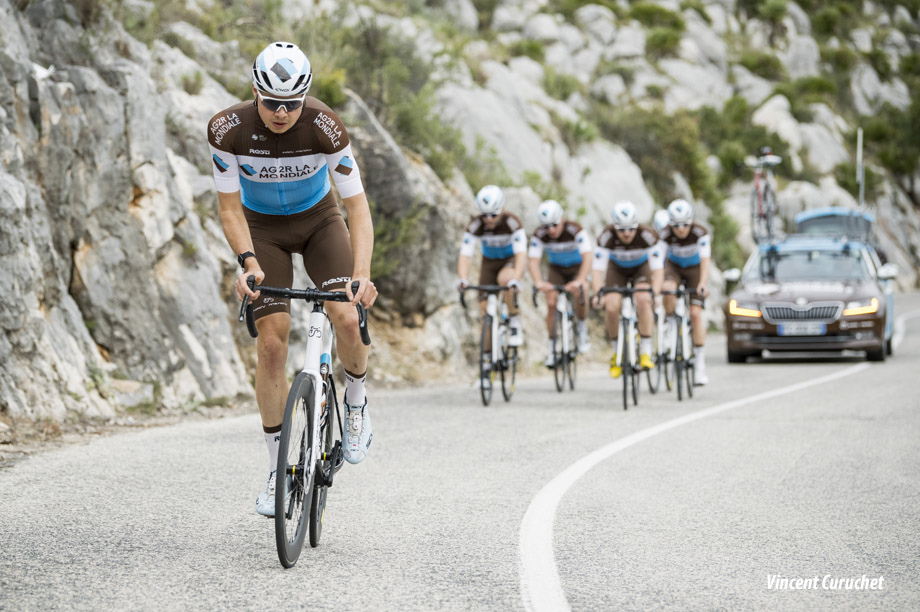 PEZ: Do you have a mentor?
Not as such, I haven’t actually been around them that much with the lock downs but Silvan Dillier, Oliver and Lawrence Naesen and Stijn Vandenbergh all have good English and have been really helpful, chatty and friendly. And of course, there’s Larry Warbasse from the USA who’s been good too.

PEZ: How’s your French coming along?
I have a GCSE in French and I can speak a little bit, I guess now would be a good time to learn? But I think that once I’m around the guys at camps and races the language will come on. 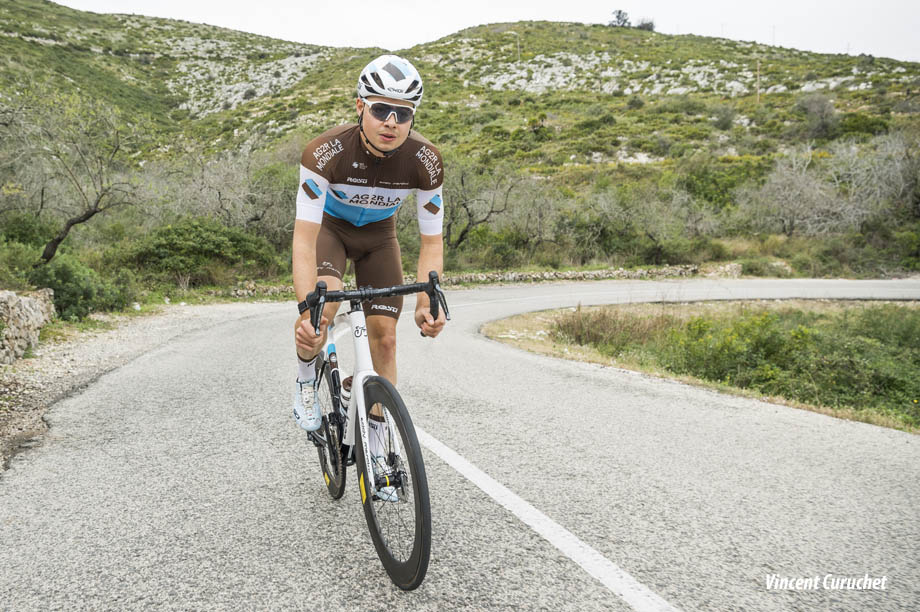 PEZ: You didn’t get a lot of races in before it all shut down.
No, just the Marseillaise and Le Samyn. I had a cold the week before the Marseillaise and only got in a couple of three hour rides, then the travel always takes it of you so I wasn’t at my best. At Le Samyn I did my job up until we hit the cobbles, I wasn’t well placed, I never got back into contention after that. There was a huge number of DNF that day.

PEZ: Are you man of the cobbles?
This year they were all cancelled but I’d love another crack at them. The trouble last year was that the team had us on 25 mm tubs and I was bouncing about all over the shop. I’d been training on 28 mil. tubeless clinchers which you can run at a lower pressure and are so much more comfortable over the cobbles. 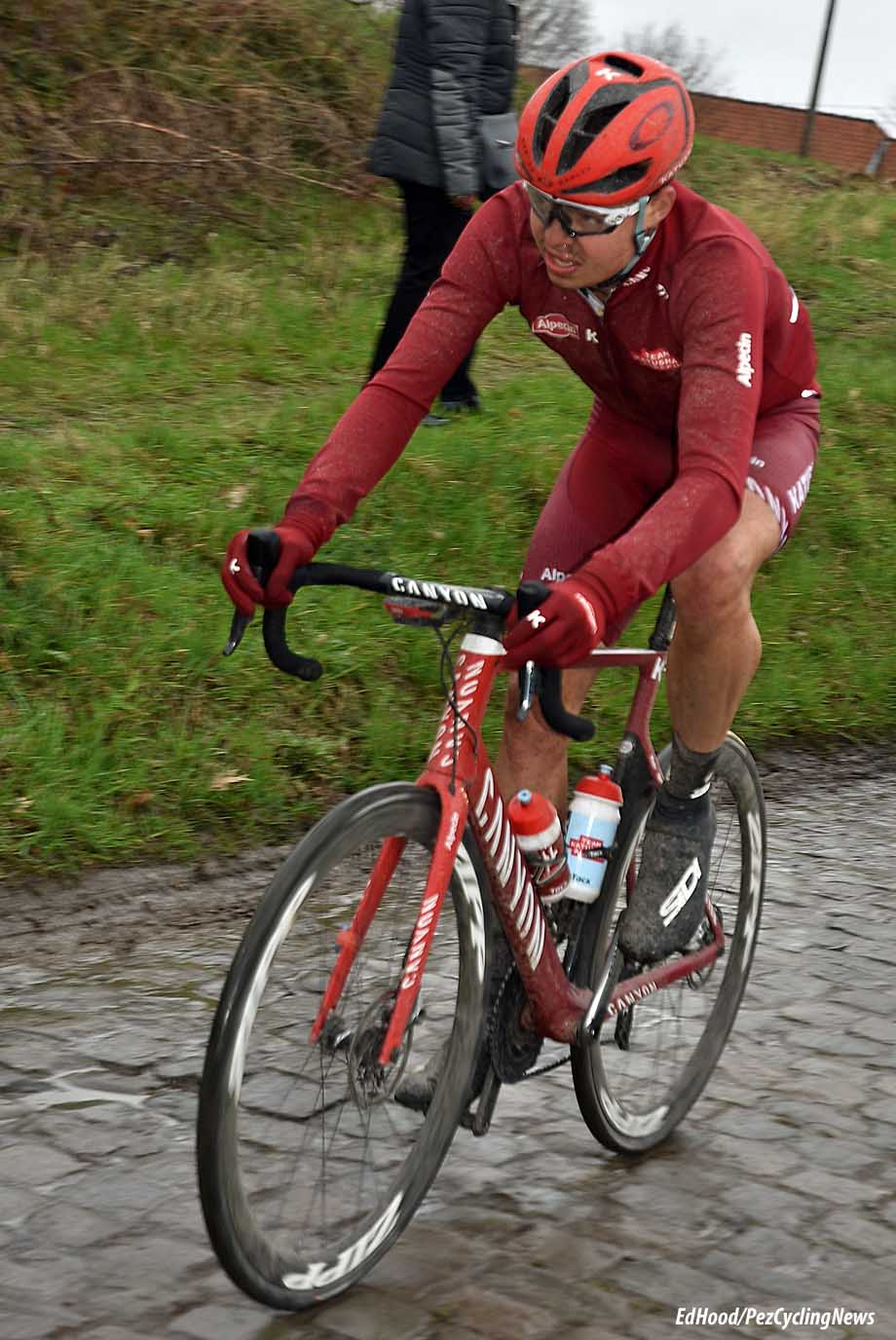 PEZ: Looking at your results from last year, fifth in the BinckBank Tour time trial, just 15 seconds back on Ganna.
I enjoyed that whole race and I was on a good day for that time trial.

PEZ: But a disappointing 11th in the British Time Trial Championships?
I rather expected that; you need to turn up to a race like that and be capable of 400 watts for an hour. I was going well at the Tour of Yorkshire but had been at altitude before the British so perhaps that was what was wrong – or maybe I was tired but I could only produce 360/370 watts that day? 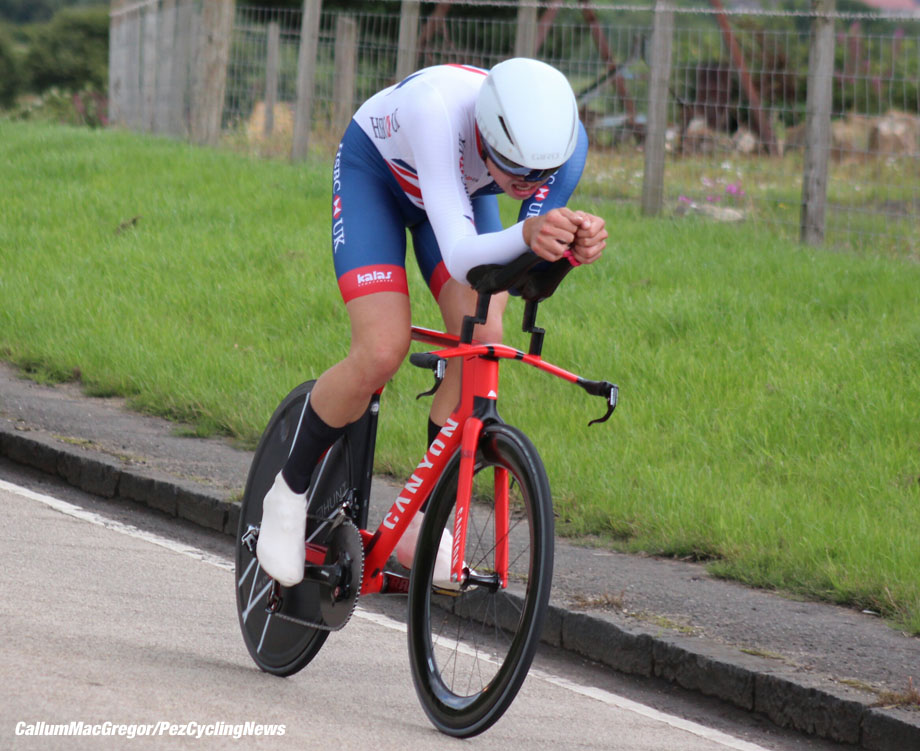 PEZ: Do you miss the track racing you used to do with HUUB?
I do actually, it was good fun but it’s not good preparation for World Tour racing where you need a lot of long steady state preparation.

PEZ: And you’re aiming at an August 1st return to racing?
I’ve been doing a lot of long steady stuff with some interval drills in there so yes, a 12 week build up now with the hope of returning to racing in early August. . . 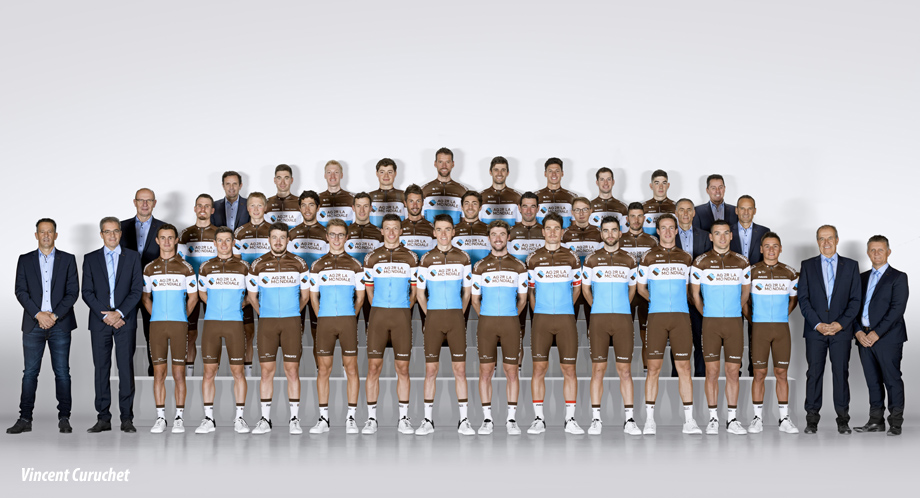 # Here at PEZ, we hope so too. With thanks to Harry for always having time for us. # 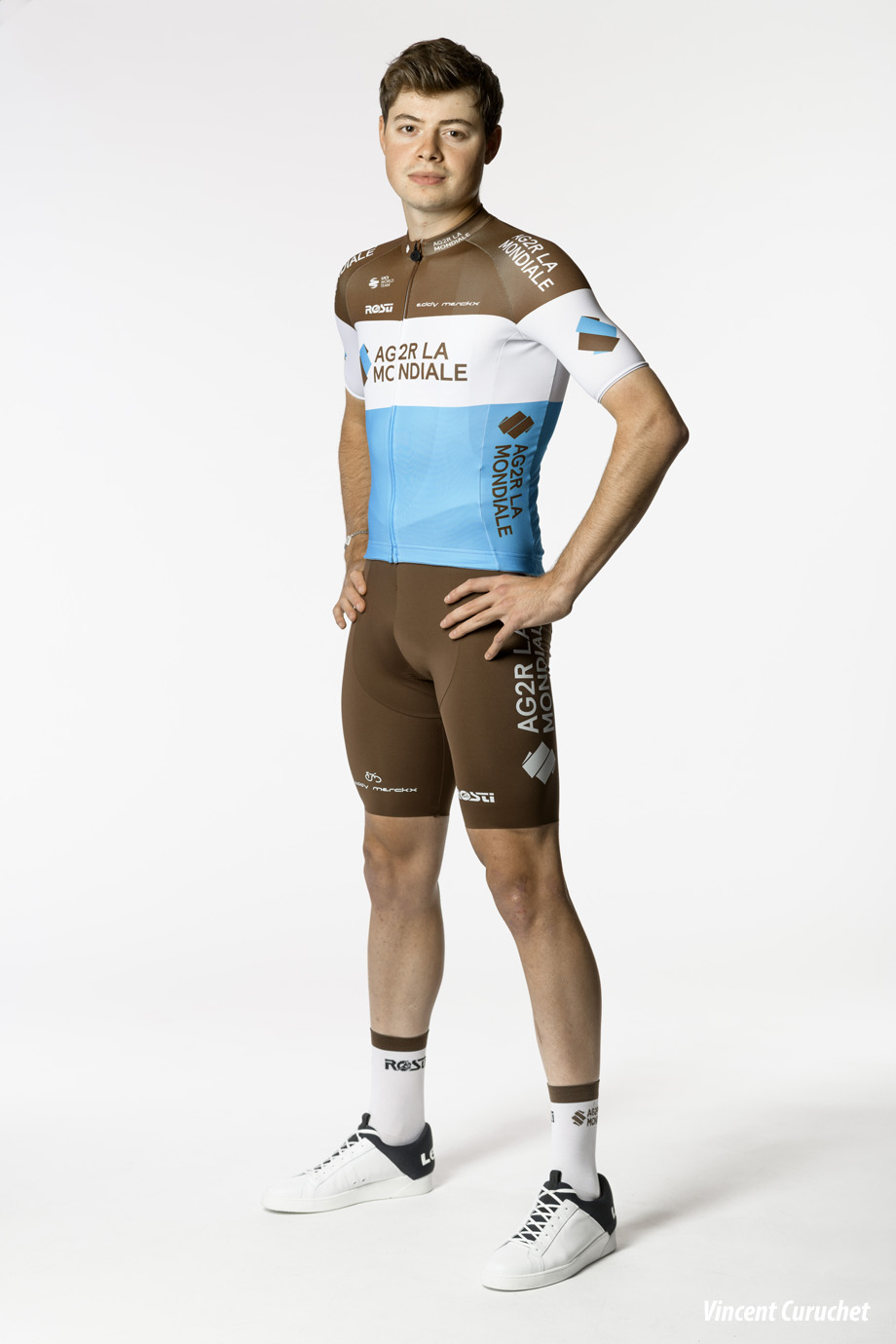