Interview: The sad news came through on Wednesday morning of the death of Steve Tilford in a traffic accident in Utah. In tribute to a legend of US cycling you can reread Ed Hood’s interview with Steve back in 2010. Our condolences to his family and friends.

When does a pro cyclist call ‘time?’ Mid 30’s? maybe late 30’s? – how does 50 and still going strong sound? Enter Steve Tilford – road racer, US cyclo-cross and mountain bike champion – and throw in a US hour record for good measure. Steve was driving to a 60 mile mountain bike race when we caught up with him on the cell phone; ‘it’s all on rock and takes about five hours, last time I flatted four times!’

PEZ: How many seasons have you been racing, Steve?
Steve Tilford: My first season was 1975 and I’ve raced every year since; that’s 35 years – it’s not normal, is it? 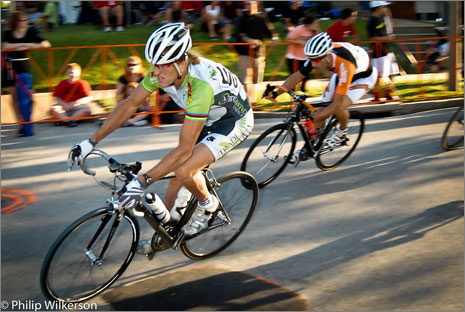 PEZ: Why have you never quit?
I never found anything I’d like to do as much. It’s not just the racing, it’s the travel, the people you meet – I don’t want to do anything else; but if I think of something, I might try it.

PEZ: Teams – Levis, Scwinn, Vosschemie, Pepsi, Wheaties, VW, Scott, Specialized – have I missed any?
No, that’s about it, but pro racing in the States isn’t like it is in Europe. The UCI introduced all that Division one, two and three stuff, but in the US we were more flexible; I could ride the US road and crit champs on my own but now the UCI enforce the teams rules. Our team, Tradewind Energy/Trek has five or six guys and we race well at the likes of Battenkill, which is a UCI race – but you get 11 or 12 local guys who somehow get $27,000 dollars together and they’ve got a UCI team. There are maybe 40 good pros in the US and 150 who make up the numbers. 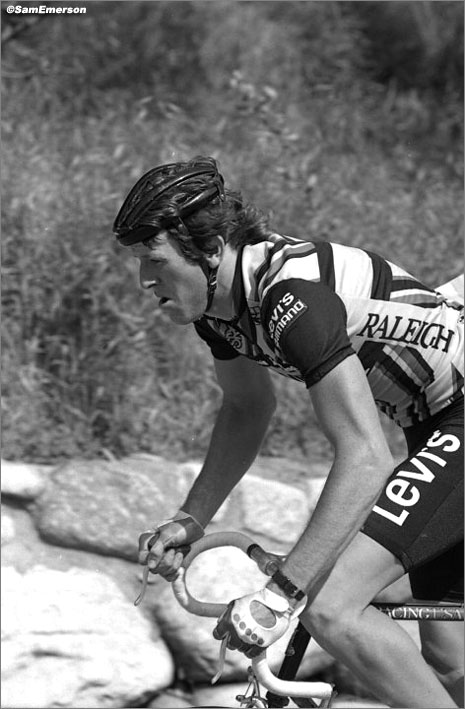 PEZ: What’s the secret of your longevity?
I keep enthused, I keep mixing it up – I won my first US mountain bike championship in ’83 but it’s really on the road I’ve made my name and I ride more on the road, now.

PEZ: You’ve been US ‘cross champ, too.
Twice as an amateur and twice as a pro; I still race ‘cross but not so much last winter because I was roofing a building. One year when I won the Nationals I lapped everyone except the silver and bronze medallists. 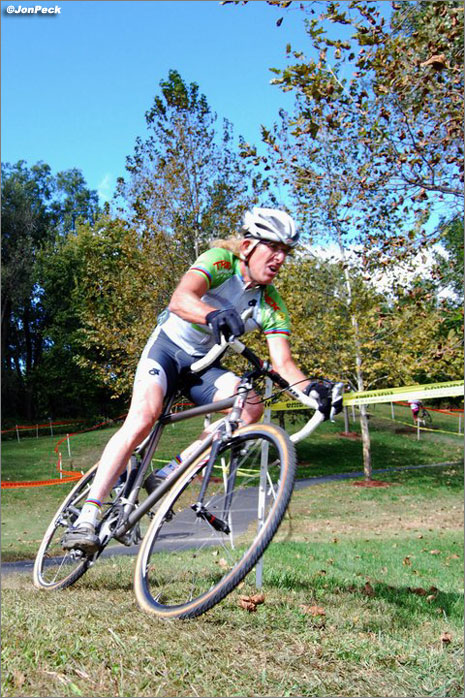 PEZ: What has been your favourite part of your career?
When I was on the Levis team with Andy Hampsten and Roy Knickman; when we were outside the US we got to race for la Vie Claire in races like the RCN classic in Columbia but then when they were in the US for the Coors Classic, we’d be racing against the guys we’d been team mates with. Back then there were two good teams, Levi and 7-11; and the sport is still a little like that, a few good teams and then a lot of other teams.

PEZ: What’s the biggest change you’ve seen in the sport?
Drug usage; I rant about it on my blog – I’m not naive, there were drugs about when I started but the drugs now are so much more effective. I’ve never been away from the sport so I can tell which guys are on it – it’s not as prevalent in the US but there will still be 5 guys out of 150 who are on it. The trouble is that the risk versus reward isn’t deterrent enough – after two years you’re back and it’s forgotten about – there’s no doubt that if you took EPO you’d come out of the Tour healthier, riding the Tour isn’t good for you, living the life of an athlete doesn’t extend your life expectancy. The thing about guys who take drugs is that they’re cheating other riders out of money and memories. It’s so apparent to me the guys who are on it, they climb 20% grades with their mouths shut – for me it’s like they have an ‘X’ marked on their foreheads! I rode against Lemond, Fignon and Hinault so I know what’s possible. 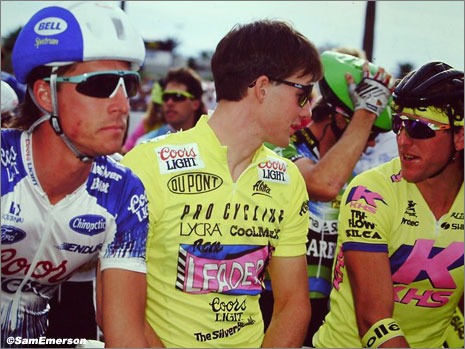 Tilford (right) at the DuPont Criterium in 1990.

PEZ: You must have seen huge changes in equipment; did you start on six speed blocks?
Five speed! But you know what – I don’t think that equipment makes that much difference. If you crash on a carbon frame it’s catastrophic, they explode – but I still have the Colnago steel frame that I raced as a junior. I love Shimano equipment and SRAM are getting in on the act – but equipment is so expensive. You’ll see crashes at the end of a criterium and there’s 50 grand of kit written off. No one is worried about their injuries, just the bike – wheel sets at two grand are hard to justify to your buddy who’s thinking about taking up cycling.

PEZ: US cycling – better or worse than when you started?
The general public acknowledge it as a sport now, when I started no one knew what it was about. Greg and Lance have made sure that everyone knows now that if you’re a cyclist then you’re a serious athlete. But the bike isn’t just about racing, if you travel then it’s a great way to see a city – I’ll take my bike to London or Paris with me. When I was a young pro there wasn’t this hierarchy where the pros looked down on the amateurs; ‘hey! I’m a pro!’ I did it because I loved it 99% of the time; the other one percent – that was what you got paid for – when it was cold and raining and you had six hours to ride. 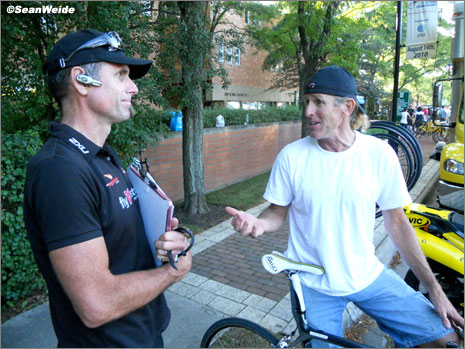 PEZ: Isn’t there a UCI maximum age for a pro?
I remember back in the days of Zoetemelk when he won the Worlds late in his career the UCI ruling was that he was supposed to quit at 40 – but guys like Danny Clark raced well into their 40’s. I never had any problems riding the US Nationals until they started to enforce this team thing. It’s a sport where it takes a long time to become knowledgeable – I’m glad the radio ban has come along, there are so many guys who don’t know what to do because they are so used to instructions coming from the car, they don’t know what’s going on in the race around them.

PEZ: What’s your favourite discipline?
Road racing – US crits, fast, lots of corners. I think that was why I was good at mountain biking and cyclo-cross. I’m not so keen on this thing where stage races where they have simply become ‘tempo sessions’ – a rider wins the five kilometre prologue and then his team defends that for six stages. The likes of UnitedHealthcare ride tempo to set it up for a field sprint every day – it gets monotonous. But It never used to be like that – Hinault, Lemond, Bauer, Hampsten, they never used to ride like that back then. I like exciting races – the Milk Race in England suited my style with those two or three kilometre climbs and I liked racing in Belgium with Wheaties/Schwinn in the wind, rain and cobbles. When the conditions are like that then you have to use your brains.

PEZ: Do you ever ride the World masters?
I’ve won the mountain bike Worlds masters five times – but that was for my sponsors; I’m not so interested in beating up on a bunch of old guys. I’d rather be tenth in pro race than win a masters – unless there was a $1,000 prize for winning the masters, of course! I ride the masters at big cross races but that’s just so I can ride the course at race speed to get the feel of it. 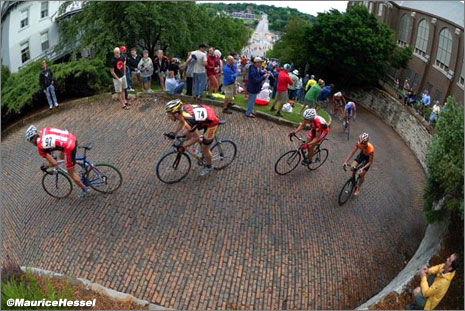 Tilford leading the way at the Snake Alley Criterium a few years back.

PEZ: And you’re off to New Zealand for the Tour of the Southland, soon.
In the Southland it’s composite teams, so I ride as a member of one of them – I’ve ridden it four times; Floyd Landis is doing it too. It’s really windy on that south island and those Aussies and Kiwis are tough guys – there’s lots of elbows employed and you’ve never heard so many swear words in your life!

PEZ: Who impressed you the most during your career?
Greg Lemond, by a mile; he’s the most talented natural cyclist I’ve ever encountered – he could have won the Tour de France when he was 17, I think. There were some of the most talented juniors in the world at that time; guys like Davis Phinney – but Greg was twice as good.

On the mountain bike, Thomas Frischknecht, he was a world champion mountain biker and cyclo-cross rider – and he could win stages in the GP Tell, too. He had such good genes, his dad Peter was on the Worlds ‘cross podium seven times during his career.

PEZ: How many more seasons?
I dunno! maybe I’ll keep going ’til I’m 60? I have a little less snap now, my jump’s not as good but I can still sprint. The big thing you notice is that it takes you so much longer to heal – one time in the Milk Race I broke my leg, hand and collar bone and was back racing at the Coors Classic within five weeks. I’ve broken my collar bone pretty often, that heals in about three weeks – it’s broken ribs that are the worst.