Daniel Holloway and Colby Pearce are regulars on the six day scene; US riders win classics and Grand Tours – there are US Pro Tour teams. It was different in 1970; with not one US rider holding a professional licence – enter Jack Simes. PEZ recently spoke to the man who was the first US rider to turn a pedal on the six day tracks for nearly 20 years and who hopes to bring the sport back to its spiritual home in the USA.

PEZ: Tell us about US cycling in the 60’s please, Jack.
Jack Simes: Between the two World Wars, six day racing thrived in the US – and then along came the depression.

There wasn’t a lot of money around and certainly not enough to bring the continental stars across the Atlantic.

When World War 2 started most of the guys who rode ended up in the military and most of the outdoor velodromes in the US fell into disrepair.

After the war it was the club scene that kept the sport alive – but it was virtually an underground sport.

I started on a little bike with 22” or 24” wheels – my family has a history in the sport, with my father and grandfather before me, both racing cyclists.

But there was no internet, no US cycling magazines, my dad used to get the UK publication, ‘Cycling and Mopeds’ every week and I’d gaze at pictures of Reg Harris, Arie Van Vliet, Fausto Coppi, Jacques Anquetil . .

The vision started to form that I should go to Europe and race with the European professionals. I started to make trips to Europe and travelled round the sprint Grand Prixs with Ron Baensch (Australian who was four times a Worlds sprint medallist) and Karl Barton (British sprinter of the era) – that gave me international exposure.

I really wanted to go pro but the draft was hanging over us all – if you joined the military as a pro athlete then that was that; but if you joined as an amateur then they would support you because you could race for them.

Those were lost years for me because I’d much rather have been professional in Europe.

The track Worlds were held after the Mexico Olympics, down in Montevideo, Uruguay.

To tell you the truth I only rode them to stay out of the army, longer!

I’d ridden the kilometre In Mexico but tied up horribly in the last 200 metres – I was on the bronze until that point but I didn’t really fancy my chances in Uruguay.

It rained when we got down there so we had an extra day to get acclimatised; the track was a big old bumpy job and on race day it was cold and misty.

I’d grown up riding tracks like that and that was an advantage right away.

I drew number one spot, which suited me, I liked to go first.

I had the gold until the ’67 world champion Neils Fredborg (Denmark, three times world kilometre champion, winning silver, gold and bronze at successive Olympic kilometres) rode and pushed me down to silver spot.

That ride inspired me; it showed me that I did have what it takes.

PEZ: How did you get on to the six day circuit?
JS: I went over to Holland in December ’69 – the Federation weren’t keen on giving me a pro licence and told me that once I turned pro I could no longer race in the USA.

I arrived in Rotterdam, where I’d ordered a bike from RIH Sport and then went to the Amsterdam six days, I was chatting to guys like Graeme Gilmore (Matt’s father and winner of 12 six days) and Tony Gowland (British rider who won the six days of London and Montreal.)

But it was the English motor paced specialist, Norman Hill who told me that I would be better basing myself in Antwerp in the north of Belgium.

There was a permanent track with mid-week racing and it was less expensive to live down there.

I eventually got my pro licence in January 1970 and started riding the weekly track races at Antwerp.

The young Belgian rider, Rik Van Linden was making his pro debut and all the big names were there – Merckx, Van Looy, Anquetil…

For the Derny race they were a rider short, the old soigneur who was looking after me said to the organisers; ‘Jack rides well behind the Dernys!’

Of course, I’d never raced behind one in my life, but he was trying to get my foot in the door – I finished second and that got me a ride in the Antwerp six with Gilmore and Gowland; where it was three man teams.

It was a tough baptism of fire; you weren’t allowed to leave the stadium – I saw Patrick Sercu carrying a mattress and thought; ‘what’s that about?’

I soon found out, you had to sleep in the cabins under the track – eventually we got me fixed up with a mattress and bedding, too.

I remember laying there and Rik Van Looy sticking his head round the door and saying; ‘is everything Ok, Jack?’ I didn’t know him, but once you were riding the six you became part of the family.

PEZ: The stats say you rode 11 sixes and finished eight – which were the toughest ones?
JS: That Antwerp one was very hard, you had to have one man on the track from 11:00 am, just rolling round, but by 1:00 pm you had to be up on the banking.

Peter Post (from Holland, the former ‘King of the Sixes’ with 65 wins, he would go on to become one of the most successful team managers in history) and Theo Verschueren (twice world motor paced champion and multiple Belgian and European champion behind the Dernys) really didn’t like each other and would go at each other behind the Dernys – laps won and lost in the Derny races counted for the overall classement, not just points so it was pretty savage.

You come out of the race having lost seven or eight pounds; I remember being so tired one night that I could hardly lift my soup spoon to eat.

I also remember the ‘Blue Train’ – which is the elite group of six day riders – teaching us a lesson and making life very hard for me and John Vandevelde (three times US pursuit champion) a few years later in the Berlin six.

PEZ: There were sixes at Detroit and LA in the 70’s?
JS: There hadn’t been a six in the US since New York in 1961. The 70’s races were promoted by a colourful, larger than life character called Charles Ruys, he was a big agent and promoter in Europe but he didn’t understand the US business system and the races were totally under-promoted.

Really they were the final nails in the coffin of the US six day scene; we were riding round in front of empty houses.

The European guys raced well – that’s their job – but they were a disaster.

The sixes in Montreal in the 70’s were different; Montreal is a cosmopolitan city with big Italian, French and German communities with an interest in cycling.

PEZ: Why did you quit?
JS: John Vandevelde and I actually had rides in several sixes, including German races when I called a halt – John and I were a good team; we just ‘clicked.’

I wanted to go home and get into promotion.

I’ve had a number of phases to my career, rider; coach; organiser; official, with the PRO, UCI and FICP and now I’m back into promotion. 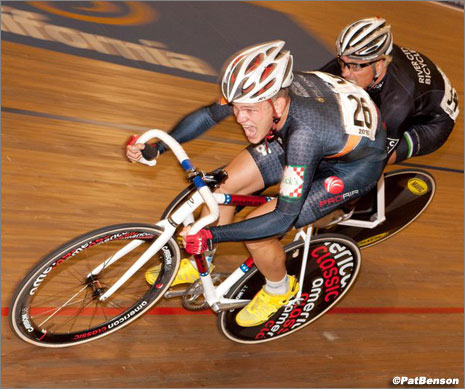 PEZ: Six day promotion?
JS: Yes, I want to bring sixes back to the US but at a high level; a good start would be a three day event at Interbike in Las Vegas.

I’ve been talking to Roger Young (former US sprint champion and 7 eleven pro) who manages our only suitable permanent indoor velodrome, in LA about the possibility.

They have a good grass roots programme there and the Nationals are held there too – but that’s not a series that will draw in the general public, with all the time trials.

Currently we’re planning a six in LA for 2011, it’s a sport which is made for TV and if we get it right it’ll spread like wildfire again.

A whole new cycling era will develop with its own heroes and villains.

***
And there are plenty of both on the six day circuit; with thanks to Jack for his time and wishing him every success with his plans.

Gent Six: The Greatest Six Of Them All