Sky, Garmin, Astana and the super teams may be the ones making the headlines on the big money transfer whirl; but there’s a lot more to pro cycling than the Pro Tour. Take Italian squadra Amore & Vita; there are a few changes there for 2010, new sponsor, new riders, new bikes. But star Ukrainian rider, Yuriy Metlushenko and DS Roberto Gaggioli aren’t going anywhere; albeit Roberto has moved from his adopted home in the USA back to la Bella Italia.

PEZ: Why the change of continents, Roberto?
Roberto: The team offered me the position of full time DS and I want my baby to grow up in Italy.

PEZ: Any chance of a comeback from you?
Roberto: No! I get out on my bike, but not too much. 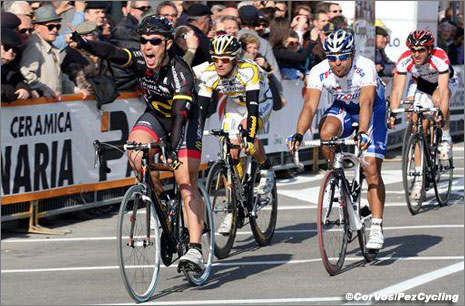 Metlushenko has shown that he can sprint with some of the sport’s best.

PEZ: The team had 18 wins in 2009; happy with that?
Roberto: We make it 23, but perhaps some were not UCI; Metlushenko won on three continents, so yes, a good year for us.

PEZ: And Yuriy is still with you for 2010?
Roberto: Yes, he’s a great guy, super fast; but he’s maybe still a little scared in those last 100 metres where you have to put your head down and just go. He had a very bad crash a few years ago and that’s still in his mind. I’ve been talking to him all winter, trying to help him put that behind him. He’s really motivated for 2010 and the Worlds. I’ve convinced him not to stop, he’s training right through. The course in Australia really suits him and I’ve said to him that it’s the chance of a life time – he’s 33 but I think he’s still one of the fastest finishers there is; he’s not too old – look at Armstrong! One of the reasons I wanted Yuriy to train all the way through, is so that he can get an early win – that makes such a difference to your morale. 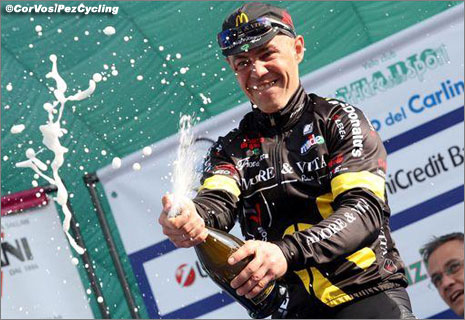 Roberto expects much more from Yuriy in 2010.

PEZ: What was the hi-lite of 2009 for you?
Roberto: Yuriy winning a stage in the Setimanna Coppi-Bartali; that was the first race where I picked the team.

PEZ: Disappointments?
Roberto: There were a couple; the German rider, Christian Mьller, he was meant to be good. But I never even saw him – apparently he had a knee problem.

PEZ: Was Chad Gerlach’s decision not to re-sign a disappointment?
Roberto: No, no, we’re really happy with what he did, he lived under a bridge for five years and we helped to get him back to living as a normal person; not to mention winning races, again. He decided not to renew because he has a new baby now and it would be hard for him to live in the US and race in Europe. He wants to get a ‘main stream’ job and support his family. I think he’ll ride local races, but not at a high level. The team and I are just happy that we helped him to sort his life out – maybe you could say that we saved his life. 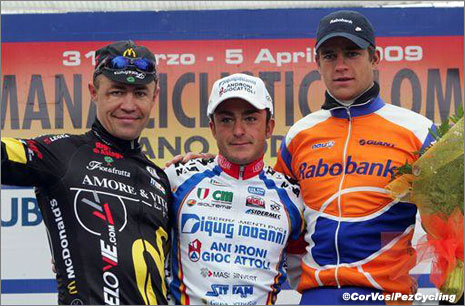 PEZ: Goals for 2010?
Roberto: A repeat of 2009 would be good. With our team, it’s not just about results, it’s about racing clean. It’s very hard to compete because there are still a lot of riders not racing clean. Every week, some one gets caught; even today there was a guy tested positive in the US. When I raced, I chose to race in the USA because it wasn’t as hard as Europe; if you’re having to take drugs to be competitive in the US, then that’s bad! We don’t demand results, but we demand that you are clean.

PEZ: Will it be Velo Vie for 2010, again?
Roberto: No, we’re in negotiation with two companies, one in the US and one in San Marino – but that’s more Christian Fanini’s side of things. I think we’ll be on SRAM groupsets, though. I can tell you that we’ll be on Spinergy wheels, I’ve been involved with the company for nearly 20 years; they’re a good company, good people. 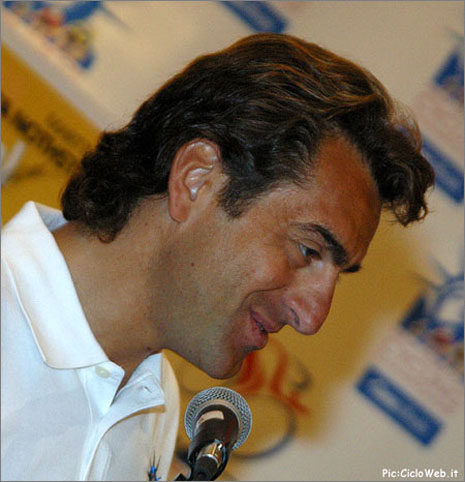 Roberto Gaggioli will once again be at the wheel for Amore e Vita.

PEZ: Any changes of riders?
Roberto: Pretty much everyone! Yuriy is staying, plus Vladislav Borisov (Russia) and Jaroslaw Dabrovski (Poland.) We haven’t finalised the team, yet but we have a new Australian, Sanderson and will be confirming the full line up, soon. I offered one of our riders a spot as a mechanic, but he refused – sometimes you have to know when to quit.

PEZ: When’s the first training camp?
Roberto: January 15th, our first race is Reggio Calabria on January 30th. I don’t know if we’ll be in the Costa degli Etruschi; Paolo Bettini organises that and there are personal issues between him and Christian. We’ll be in the Tour of Sardinia and Laigueglia Trophy, though.

PEZ: Who’s your rider of the year?
Roberto: Cavendish; I love what he did and I admire the fact that he rides a full season. A rider like Contador is very gifted, but very selective with his programme. I have more admiration for guys who ride a full programme; and I like that Cavendish speaks his mind, he reminds me of myself, in that respect. 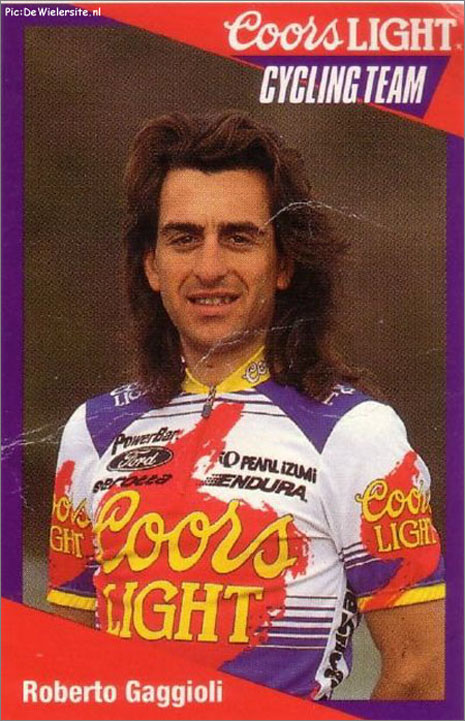 It wouldn’t be fair to leave out this classic.

PEZ: Tour 2010, prediction?
Roberto: Contador; right now I don’t think he has any competition on a physical level. If he can maintain his mental strength, I don’t think there’s anyone who can beat him.

Lance? – I said this year that I didn’t think he’d even finish – but he made the podium; he proved me wrong there. I don’t think I’ll make any more predictions about him !

The team will be riding Dynatek bikes.

***
With thanks to Roberto and wishing Amore & Vita/Conad every success in 2010 – and Metlushenko has to be worth a trip to the bookies for a Worlds top ten place!