If there’s any doubt that Andrew Talansky is on the road to being the USA’s next Grand Tour star, he dispelled them in the recent Paris-Nice where he gained his second podium finish in one of the world’s greatest stage races – following on from an excellent second place behind Bradley Wiggins in last year’s Tour of Romandie. We caught up with Andrew just after Paris-Nice to discuss his recent performances.

Talansky’s first venture into the pro ranks was with US team Toshiba-Santo in 2008. The following season he was signed by Amore & Vita-McDonalds; whilst giving him a good taste of the European scene, it was back to the amateur ranks and US team California Giant for 2010.

But a series of strong rides gained Talansky a ride as a stagiaire with Jonathan Vaughter’s Garmin team from August. The year finished with stage wins in the Joe Martin race in the US, the Pays de Savoie in France and Volta Tarragonna in Spain. There was also a second on GC in the Tour de l’Avenir and a US U23 TT title. These results meant there was little doubt about his move to the team on a full time basis,

His first full pro season in 2011 was very promising; fourth in the Tour of the Mediterranean, ninth in the Tour of Romandie, numerous good finishes in time trials – fifth in the Criterium International TT being one example – a Vuelta finish and 16th in the world TT champs in Copenhagen all boded well. 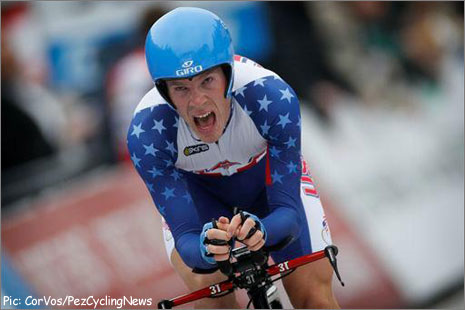 Season 2012 started well with eighth in the Tour of the Algarve; then a sparkling second place to Bradley Wiggins in the mountain time trial and GC in Romandie confirmed Talansky’s arrival. But he hadn’t finished for 2012; there were stage and GC wins in the Tour de l’Ain; topped off with an excellent seventh overall in the Vuelta.

And it hasn’t taken him long to pick up the thread in 2013 with a stage win; spell in the leader’s jersey and final second overall in the ‘Race to the Sun.’

We caught up with the 24 year-old from Miami shortly after his sterling performance.

PEZ: Congratulations on your Paris-Nice ride, Andrew – how did your race build up go?
I hadn’t raced a lot beforehand, the team’s bikes getting stolen at the Tour of the Algarve didn’t help.

PEZ: The prologue was short and technical.
I felt good in the prologue, I was putting out good power but I decided I was going to be careful. Two years ago I crashed at the Tour of Romandie and lost 30 seconds – if I hadn’t then I’d have been on the podium. But I figured in the prologue that a few lost seconds wouldn’t affect the final GC – it turned out that way, so my decision was the right one.

PEZ: Stages One and Two were sprint stages.
If you’re riding GC then you just have to get through those days to the stages where the race will be decided. You have to avoid the crashes and the team did a great job of keeping me out of trouble – there were a lot of crashes on those stages but I didn’t even see one of them.

PEZ: Stage Three, a win and the jersey!
It was a simple stage, I stayed warm before the final climb and then stripped off for the climb – I felt good, relaxed. It was good having David Millar’s experience to call on, he warned me about the treacherous descent coming in to the finale – so I knew to move up. 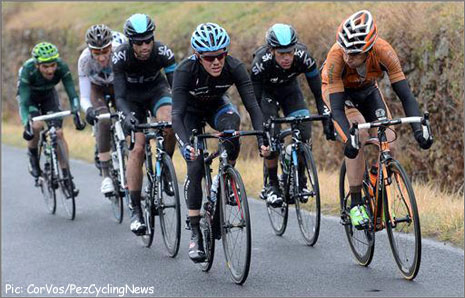 When the final selection group went away I went with them, I wasn’t thinking it was going to stay away; but Sky’s David Lopez did so much work for Richie Porte that it stuck.
With one kilometre it was apparent it was going to be a sprint and I have a good finish in that situation. Richie was riding for time so he led it out and I came round him and held the rest off. 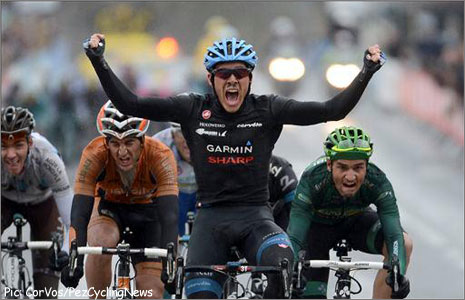 It was an incredible feeling – I won a stage in the Tour de l’Ain last season but this was just so much bigger. There was a lot of emotion – I’d been preparing for the race for three months.

PEZ: Stage Four – defending the jersey.
It was classic defense of the jersey, I knew what the team could do; but it was still impressive to watch. Any of our guys who were dropped on the climbs got right back on and went straight to the front – the whole team rode above themselves. 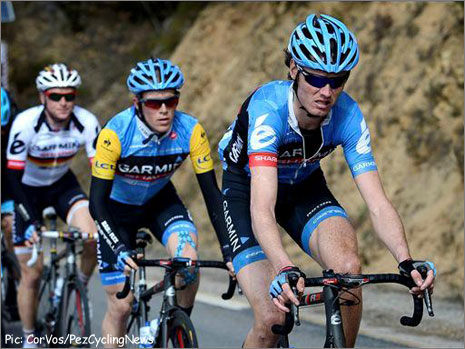 PEZ: Some say that you were a little too aggressive on Stage Five where you lost the jersey?
We knew that the final road stage into Nice would be hard to control so I wanted to grab time on Porte for the final time trial. I lost the jersey but I was relaxed the next day – it was a very tactical day . . . 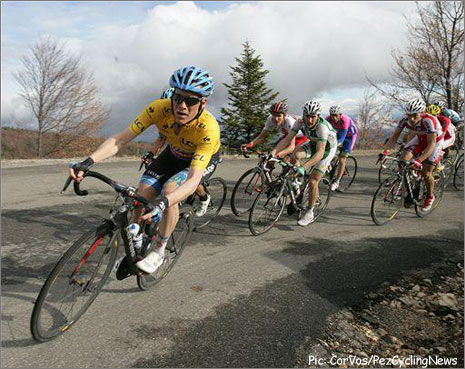 PEZ: Stage six?
There was no pressure, a good break never went – but we were conscious of that final long, dangerous descent into Nice. That was where Levi Leipheimer had that bad crash a year or two ago and BMC were piling it on down there to try to distance Richie.

PEZ: Stage Seven – did you think you could get the better of Porte in the time trial?
I knew that Richie Porte was going well and that 32 seconds would take a lot of taking back. Even if I was on a really good day I’d have struggled to make that deficit up.

I did all I could but Richie was the best rider in the race. 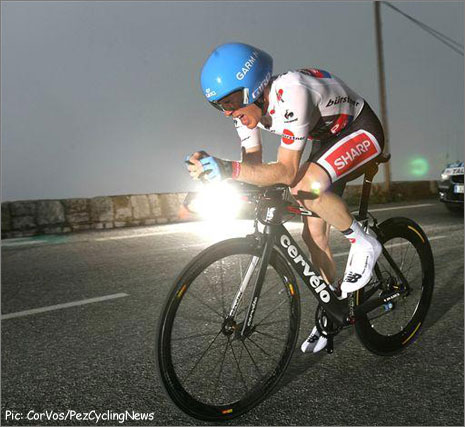 PEZ: What did you do to recover on Monday?
Not much of anything! I just rode a little, you have to recover mentally – my next ambitions are in the Tour of the Basque Country and Tour of Romandie.

PEZ: You were second in Romandie in 2012 – is Paris-Nice a bigger result?
Definitely! Romandie was a great experience but maybe a bit of a surprise and I had no pressure on me in the final time trial. But Paris-Nice was a stated goal and I had a team there in support of me.

In Romandie I was climbing OK but in Paris-Nice I was riding the cols well. Having the Vuelta under my belt helped a lot – I feel I can climb more strongly now and can deliver when I’m under pressure. But I’m still learning . . 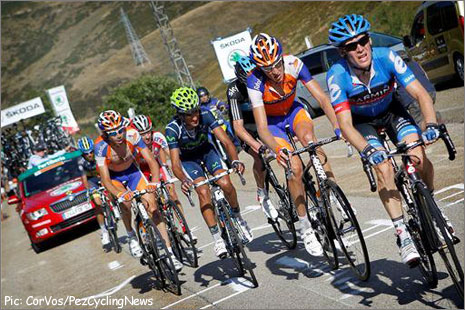 PEZ: Last season was a long one for you, the Algarve to Lombardia.
I actually came out of 2011 really tired but I was good coming out of 2012. I had asthma from allergies at the Tour of California so I didn’t race in June – which gave me a good break. In the second part of the season I had Poland, de l’Ain and the Vuelta.

PEZ: Do you vary your winter preparation?
I pretty much leave it to my coach – but I wouldn’t describe my winter training as ‘fun.’I follow the plan, do the work and it pays off. But you have to love your training . . .

PEZ: What do you think about Vincenzo Nibali’s comments that riding with power monitors should be banned in races?
He’s a great rider but I have to question that remark – should we guess the weight of our bikes, should we guess our own weights? You have to embrace science, technology and data where you can – I had an SRM on the bike but hardly looked at it; you analyze the SRM data after the race. And there were days where Team Sky were riding compact chainsets and didn’t have SRM’s on the bikes.

PEZ: Seventh in the Vuelta in 2012, are you back again in 2013?
No Giro, no Vuelta – it’ll be the Tour de France for me.
I’m too young to ride two Grand Tours. I think if you do ride two then it’s Giro/Vuelta – Rodriguez proved that last season. I think you have to be a really experienced rider like Bradley Wiggins or Ryder Hesjedal to consider the Giro and Tour.

The Tour de France will do for me, this year!