Interview: International man of intrigue, multi lingual, extensively travelled, font of all knowledge and double national champion – Tim Harris has been in the ‘Cycling Game’ for most of his life and is now on the staff of the Bahrain-McLaren team. Ed Hood spoke to Tim in lock down in Belgium. 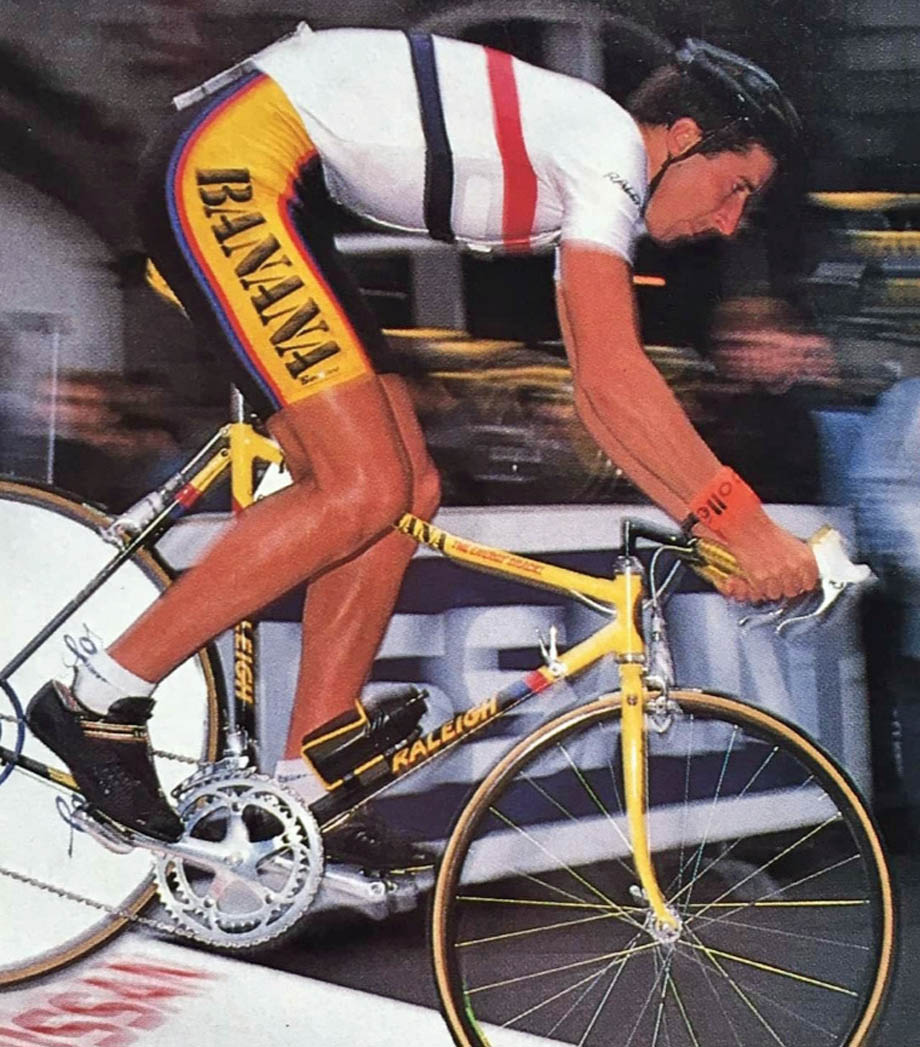 Tim Harris has been around cycling all his life, there have been spells as a professional in The Netherlands; his home UK – where he won the national professional criterium and road race championships – Spain and Portugal where he won two stages in the madness that was the Volta in the early 90’s.

Among a raft of other strong results there was also a top 20 in the GP E3 and a top five in the amateur Paris-Roubaix. Resident in Belgium for the last two decades, and now an ID card carrying citizen, some of the biggest names in cycling; Cavendish, Froome, Thomas, McLay, Gaviria have all taken shelter in Harris’s big old house in between battling with the local, ‘Kermis Kings’ over the Bergs and Kasseien of Flanders. He drives a Skoda hospitality car in the Tour de France every year and is possibly the best connected man in Cycling, there’s no one he doesn’t know or who hasn’t lodged with him at some time. 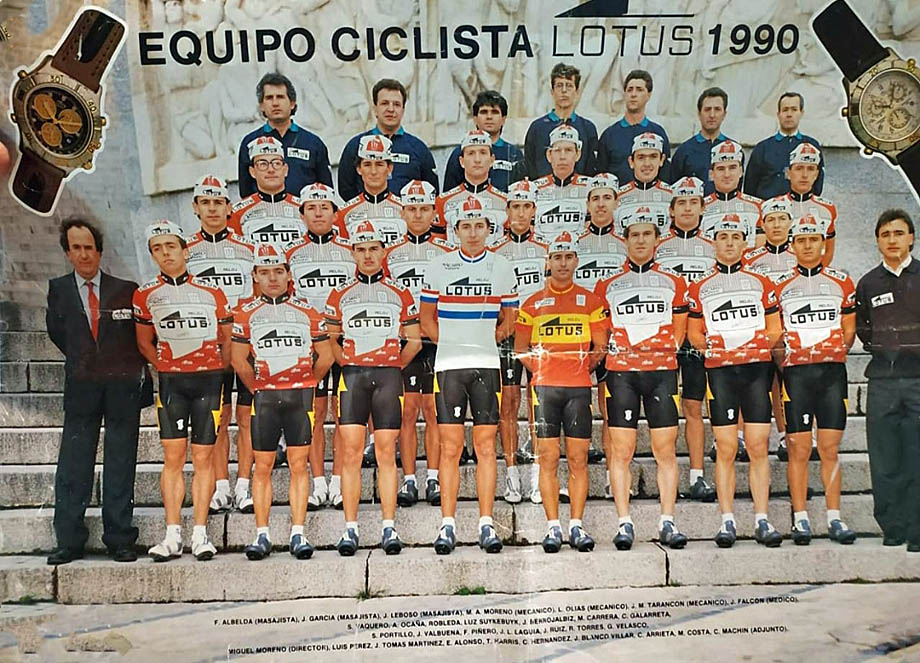 It seems long over-due but a World Tour team has decided that they could use a man with an address book on his iPhone like that of Mr. Harris. The revamped Bahrain team, bolstered by their fresh partnership with Formula One maestros McLaren as co-sponsors and the arrival of one of the brains behind Team Sky’s domination of stage racing, Rod Ellingworth have signed the man who originally comes from another of the Flat Lands, Norfolk.

We caught up with him as he remained ‘locked down’ in Belgium.

PEZ: How did you get the job, Tim?
Tim Harris: As you know, I’ve been involved in cycling all my life and I’ve known Rod Ellingworth for a long time, last September he offered me a post; there are three aspects to it, looking after the young riders on the squad, sports director in the team car and scouting for talent. 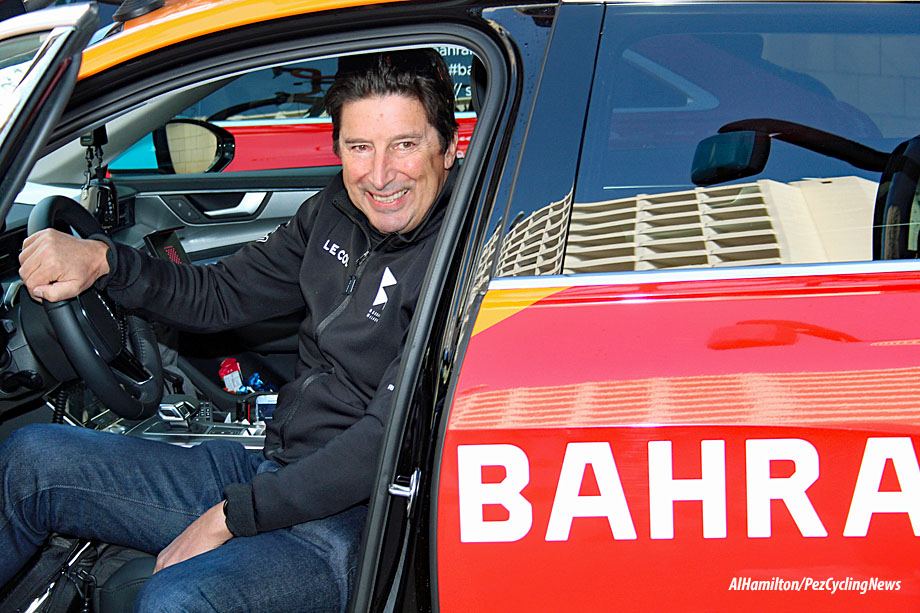 PEZ: Are you locked down over there in Belgium?
Absolutely; we’ve been so for 10 days more than the UK so that’s 26 days – longer than the Tour de France! The good thing is that we’re allowed out on our bikes on our own, not like in Spain and Italy where you’re only allowed out for essential journeys for food or to the chemists.

PEZ: How are you spending your time?
I got out on my bike every day or I’d go crazy. I have conference calls with the team members and we have a team App – this morning Alice Rawlinson who’s team physio and fitness coach will be leading an on-line exercise class which we can all join in with. She’ll be working on strength and mobility today, we copy the exercises she’s doing. 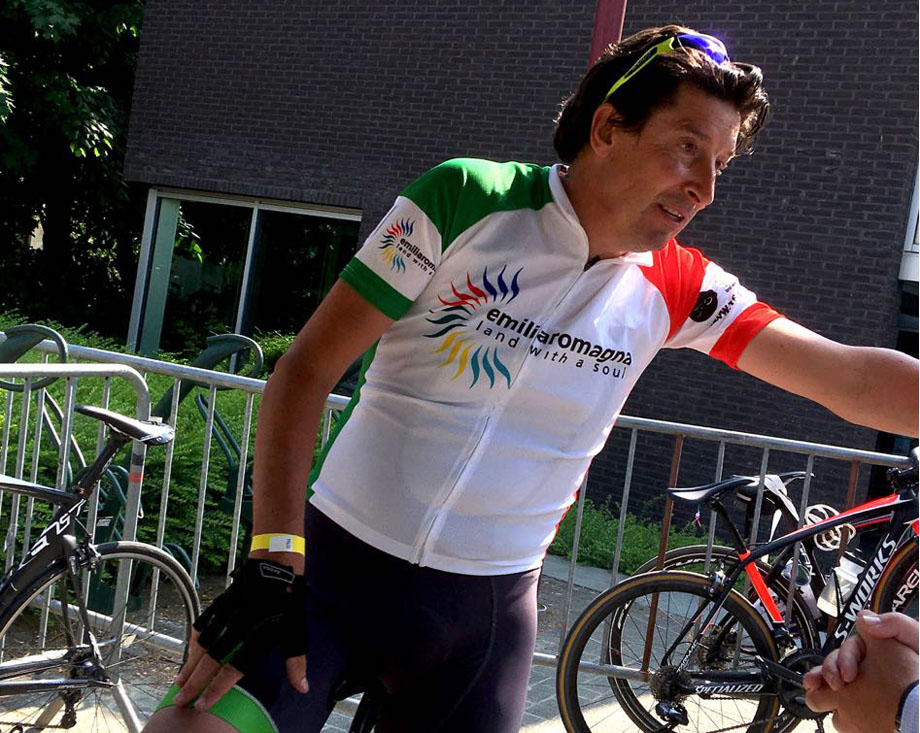 PEZ: Did all the riders get home before the ‘lock down?’
Fortunately, yes they all managed to get home. No one would like to be stuck somewhere they didn’t want to be with the possibility of being there for three months. It all happened so quickly, we had the Opening Weekend then the situation really started to hit home at the UAE Tour then Paris-Nice finished prematurely but I don’t think any of us imagined it would hit so hard, so quickly.

PEZ: Are there specific guys on the team you have responsibility for?
Yes, the young Colombian, Santiago Buitrago, the young Dutchman Kevin Inkelaar and the three English lads, Fred Wright, Scott Davies and Stevie Williams. Stevie is coming back from his knee injury, it’s been a long, hard road but he’s getting there. 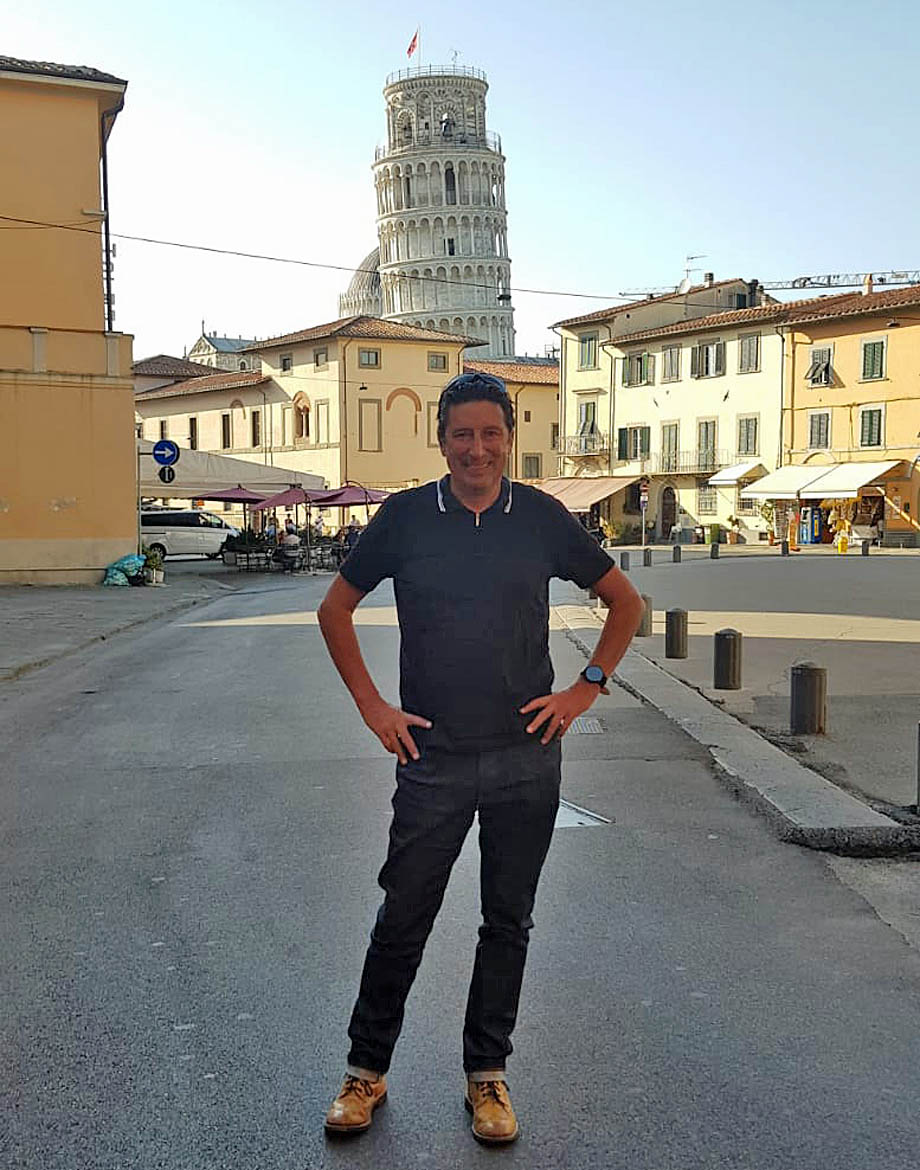 Tim gets around the globe

PEZ: Do you give them training advice?
No, that’s down to their coaches who give each rider a specific regime but right now that’s difficult because there are no objectives. And for some of the lads it’s impossible to get out on their bikes, in Colombia you’re only allowed out of your house twice each week – there’s not a lot of cases there but the government is adopting a preventative approach there.

PEZ: Are the riders on Zwift?
Yes, anything to keep the boredom away – the ‘virtual’ Tour of Switzerland is on the way. 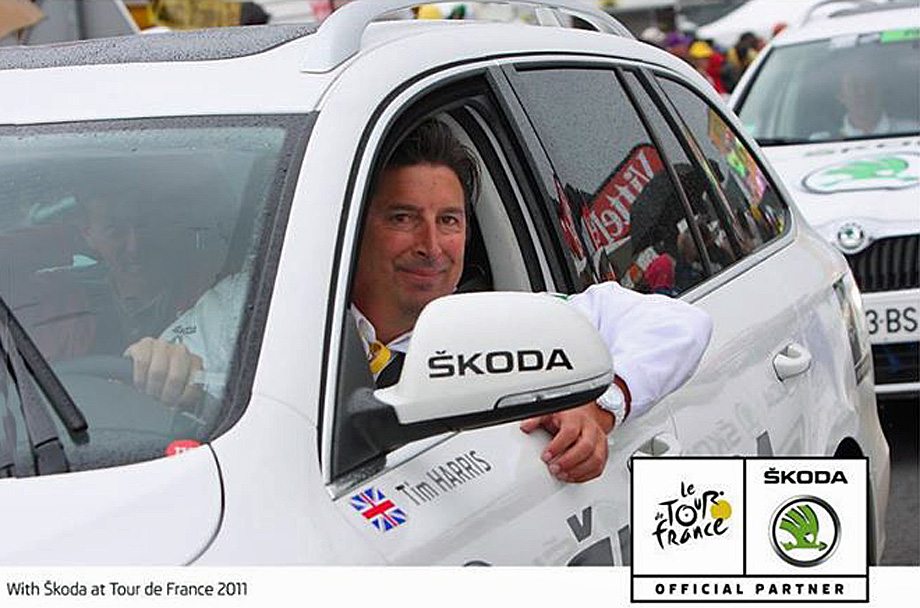 VIP driver for Skoda at the Tour de France

PEZ: The team started the year well, five wins.
Really well – and it wasn’t just wins, it was good to see Mikel Landa riding strongly in the Ruta del Sol. Ivan Garcia Cortina’s stage win in Paris-Nice was a nice result for us too. 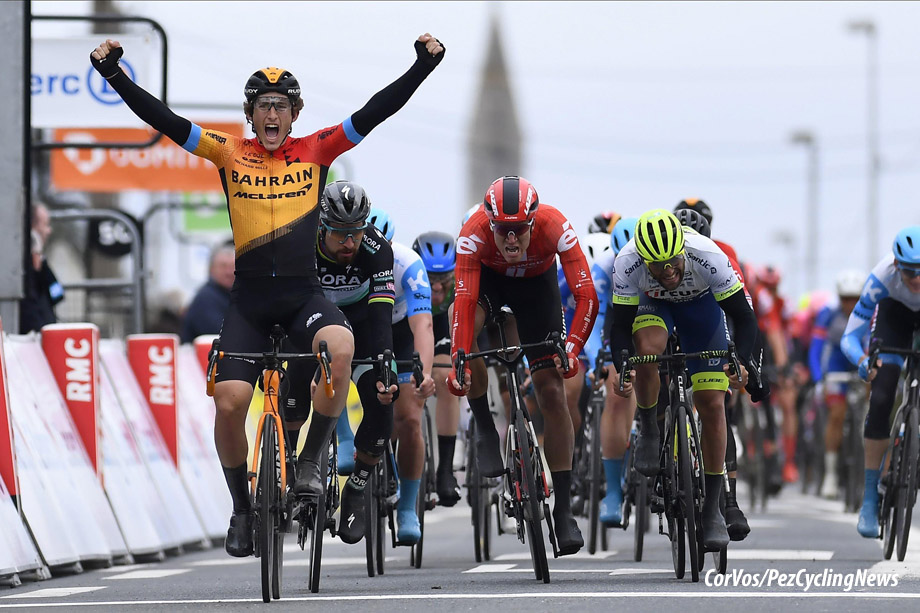 PEZ: Despite the fact he’s knocking on now at 36 years-of-age, Heinrich Haussler was looking very frisky at the Opening Weekend.
He’s super-motivated, he did cyclo-crosses in Belgium over the winter; he rode the World Cup at Zolder and was training in Belgium over Xmas. He was going very well at the training camps and in the Opening Weekend, he was really looking forward to the Classics, he loves those races.
But for him it’s not just about results, a large part of his remit is to give guidance to the young riders. He was advising Fred Wright before Het Nieuwsblad on what tyre pressures he should be riding and explaining to him about positioning. Heinrich is ideal for young riders to learn from, he’s super strong and has such a good racing brain. In the cobbled Classics much of it is about your position coming into the climb, they’re extremely tactical races and it’s vital to know where you should be at all times. When you’re up against those Belgian guys they’ve been riding those parcours since they were schoolboys and know the roads like the back of their hands. 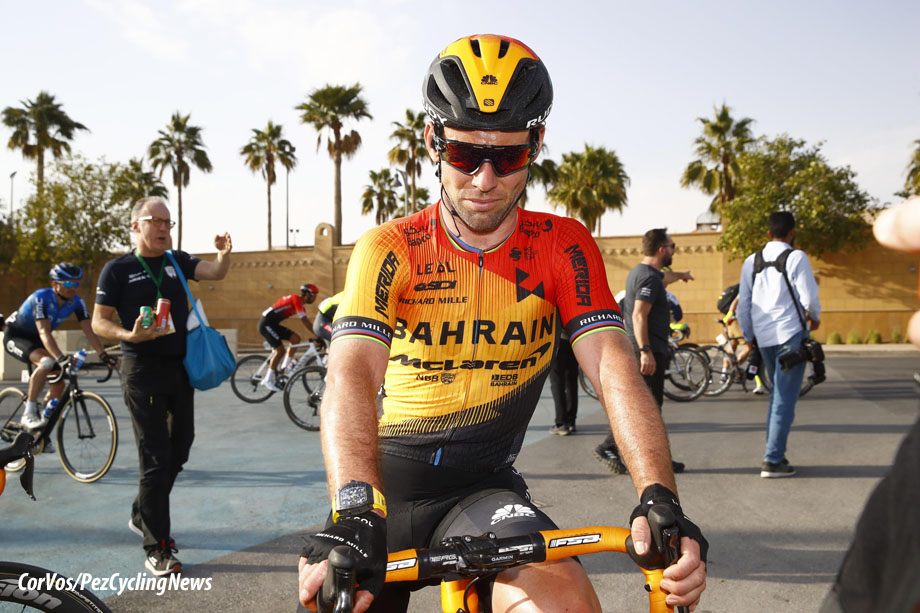 PEZ: I have to ask, how’s Cav doing?
He’s been training extremely well, full of enthusiasm, the first one ready to go on all the runs at the training camp. He’s super-professional in his approach. That fallout from that illness he had – and don’t forget he hardly raced for two years – doesn’t just clear up in a couple of days. The thing is that he’s always in the limelight and if he doesn’t win then we hear that he’s, ‘finished’ but I’ve no doubt that he’ll be back. In the Saudi Tour he was working for Phil Bauhuas, who won the race overall. Mark’s been training twice each day; on the road in the morning then on the track in the afternoon – when you see how he works then you realise why he’s so good.

PEZ: No Giro, probably no Tour, not good for the sponsors.
Catastrophic. For all businesses, it’s not just cycling-related, we’re not in a bubble, and no one is sure how it’s going to end. I don’t know if things will ever go back to how they were before. When we get to end of this crisis we’ll just have to figure out the best way possible to get things moving again. 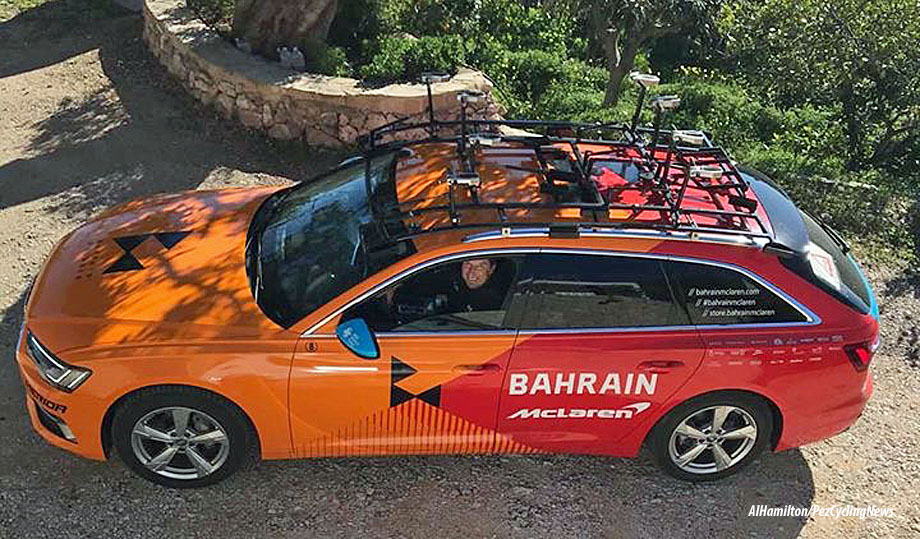 It has been a short season so far

PEZ: Has Bahrain-McLaren had to ‘cut its cloth?’
We’ve all accepted a 70% cut in salaries; of course the team wants to move forward but there’s no prospect of that right now – it should be Liège-Bastogne-Liège this weekend. . .

# ‘Strange Days’ indeed, with thanks to Tim for his time, hopefully it won’t be too long before we’re chatting to him at a race start, again. Tim is also involved in the Dave Rayner Fund. # 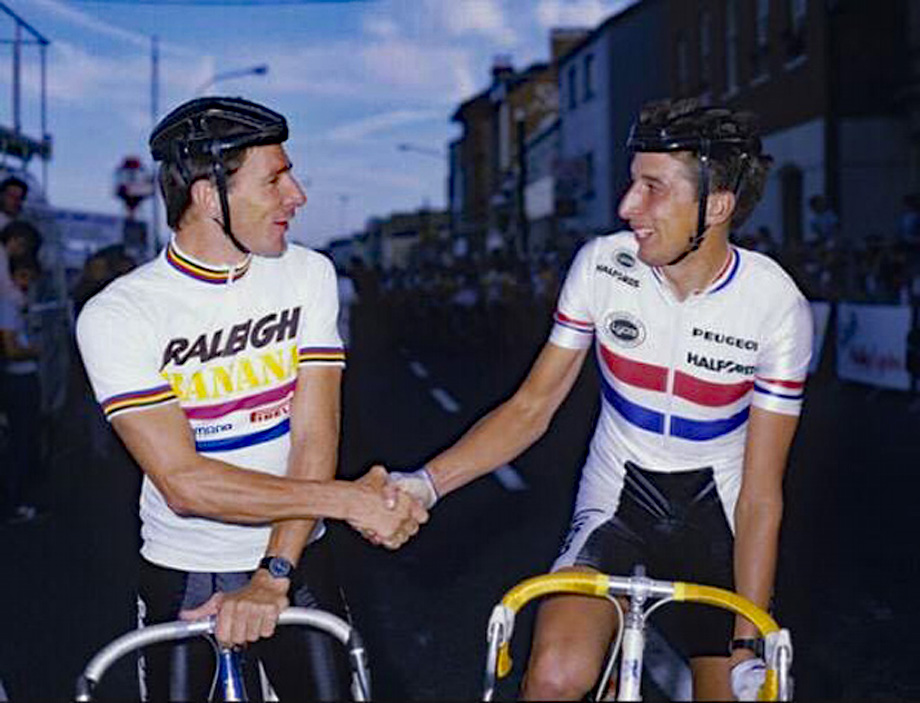