With the Ronde van Vlaanderen looming only a couple days distant, it’s worth taking a quick look back at the succession of big races that have just passed us by. Who better to talk to than the great Barry Hoban. Hoban recently spoke with Ed Hood on Sanremo, Gent-Wevelgem, the Ronde, and Mark Cavendish.

Milan-Sanremo was to be Mark Cavendish’s crowning glory – becoming the first man to win the Primavera with the rainbow jersey on his back since 1983 when Saronni won on the Via Roma.

The only other riders to have achieved this historic feat are Gimondi, Binda and Merckx – twice.

But it was not to be, the Italian TV helicopter’s images were of a world champion in pain on La Manie. 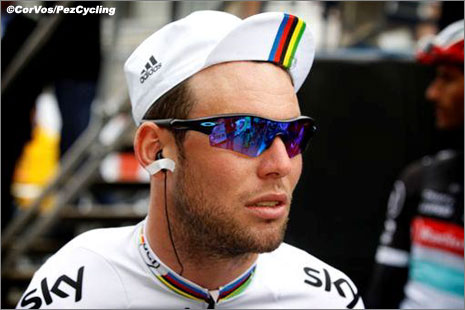 While Cavendish’s spring hasn’t been a bad one, he has come up noticeably short on a couple of occasions – Milano-Sanremo and Gent-Wevelgem.

The mask on his face being one that anyone who’s ever been dropped on a climb they can’t handle is familiar with.

Ghent-Wevelgem was where amends would be made; he’d dump the nitrous oxide into his legs with 200 metres to go and the Primavera would be forgotten by media and sponsors alike.

But it didn’t pan out like that; over the top of the Kemmelberg for the second time the hammer went down, there was a split and Cav was on the wrong side of it.

But QuickStep was on the right side and so was Katusha – Boonen and Freire mustered their men and second by second it became apparent the lead group wasn’t coming back.

Cav made a token attack on the run in but all in all, another disastrous day for the world champion. 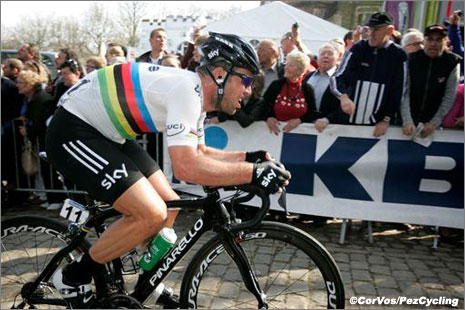 The World Champion was put into difficulty on La Manie and the Kemmelberg.

It’s easy for someone like me to sit and write words like these, however well informed and connected one may be – but unless you’ve been there, on the hard roads of Flanders, it’s all so many words.

With that in mind, there was only one man to telephone for his opinion on the world champion’s current condition and what’s happening out there in the Flemish Ardennes.

Barry also made the podium in the Paris-Roubaix, Liege-Bastogne-Liege and Paris-Tours.

PEZ: Cav was ‘blown out’ on La Manie in Milan-Sanremo, this year – but how did he win the race, three years ago?
Barry Hoban: I think he’s over weight, Boonen and Goss got over the climbs in Milan-Sanremo – a kilo on a climb like La Manie is a huge amount.

Look at horse racing; if you handicap a horse even one pound, it makes a difference.

I think he was fitter when he won the race; look at his legs, there’s very little definition.

Professional cyclists are quick learners, when they see Cavendish in trouble the pressure goes on, they want rid of him, he’s an amazing sprinter so there’s no way they’re taking him to the finish in arm chair.

But I think that even if he got back, he’d have gone again on the Cipressa. 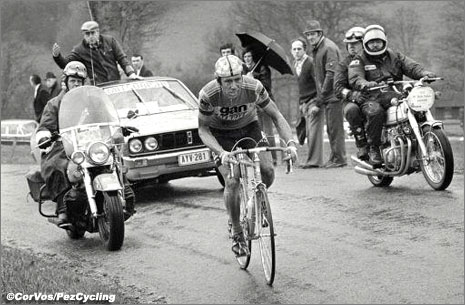 PEZ: On the subject of the Primavera – they’re talking about changing the percorso; do you think that’s necessary?
BH: Originally there was no Poggio – when I first rode it was there no Cipressa.

But this meant that Spanish sprinter like Poblet could win it – it’s not supposed to be for the pure sprinters, it meant to be for the classy hard men.

So they added the Cipressa and then they added La Manie to make it tougher still, because the organisers don’t want it to end in a sprint each year, they want it to split.

It only just split this year so they’ll want to make it that little bit harder.

Nowadays, you have many more riders at a higher level than you ever had before so it gets harder and harder to separate them.

When we rode, there were three climbs of the Kemmel, not two, like this year.

If there had only been two ascents back then, Patrick Sercu would have won it every year.

It was always that last time up where he would get into difficulty.

The Kemmel came with around 40 K to go – that might make you think that there was an opportunity for it to come back together.

But nobody told Merckx, De Vlaeminck, Verbeeck and Godefroot about that – they didn’t hang around to wait!

On the long straight roads after the Kemmel the echelons would form, guys would crack and the gaps would appear.

PEZ: Cav said that the damage was done over the top – he was around 30th wheel, someone lost the wheel and that was that.
BH: If you’re 30th wheel off the Kemmel then you’re as good as off the back.

You have to be able to see the leaders when you come off the top.

PEZ: But how can he win at Kuurne, then get dropped in Ghent-Wevelgem?
BH: There’s a hell of a difference; Kuurne-Brussels-Kuurne is only 200 K and it’s much earlier in the year.

The big riders are just beginning to get into thinking about the Classics – the big tune ups are Paris-Nice and Tirreno-Adriatico.

You have the races in Qatar and Oman but the serious preparation races are Paris-Nice and Tirreno.

Another factor is that Het Nieuwsblad is the day before Kuurne and many of the big names have raced hard there.

PEZ: What about the weight issue; Marc Sergeant and Patrick Lefevre said on Belgian TV that they think he’s two kilos over weight?
BH: I heard that Cav is 70 kilos, I was quite a bit taller than him at 5’11” and that was my racing weight.

One kilo is the straw which can break the camel’s back – and two kilos is a lot on the longer climbs.

I used to do much of my training in the Flemish Ardennes – I’ve trained on all of the hills which appear in the Cobbled Classics and used to use them as markers.

I’d have set start points and attack them as if I was racing.

But I used to find that until I reached racing weight, I couldn’t drive all the way to the prime lines – I’d crack maybe 30 metres before. 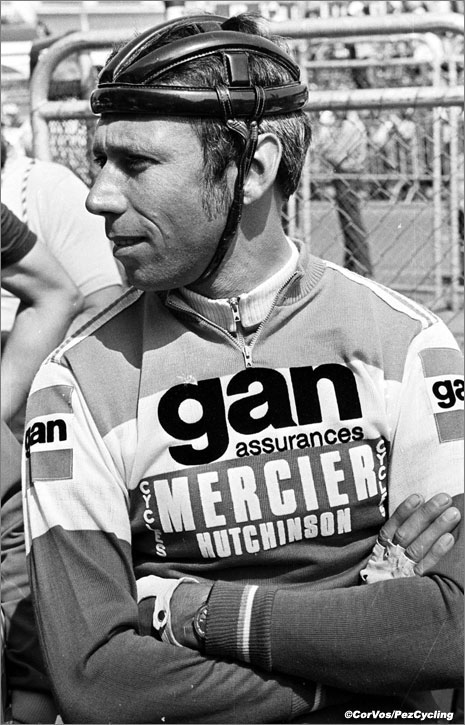 PEZ: De Panne, how critical is it to Flanders success?
BH: This time period is crucial; you must maintain momentum, if you have form then you have to keep it – and you can’t put on any weight.

PEZ: How does the Ronde Van Vlaanderen compare to Gent-Wevelgem?
BH: There’s more distance for a start, this year the Ronde is 255 K; and there are more hills – 16, this year.

And of course, the last climbs come much closer to the finish than in the Gent-Wevelgem, the Paterberg is only 13 K from Oudenaarde.

The magic number is 200 – a race over that number of kilometres is a boy’s race.

When it goes up to 260 K that’s when it becomes a man’s race – that extra hour-and-a-half makes all the difference.

PEZ: What’s your take on the new finishing circuit – and no Kapelmuur?
BH: It’s driven by commercial interests – it means they can stick the ViP’s on the Kwaremont and they’ll see the race three times.

It makes the transport considerations easier and the ViP’s can just sit there.

It’s increasingly becoming more about financial considerations and less about sporting ones.

When I raced, the Kapelmuur wasn’t actually on the itinerary, the main road was cobbled and it was tough between the gradient and the cobbles.

They only re-routed up the Kapelmuur when the main road was tarmaced. 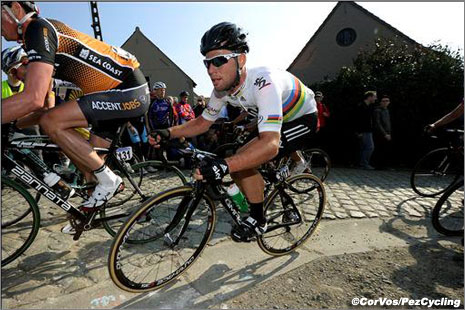 PEZ: Who’s your tip for the Ronde?
BH: I think that Boonen and Cancellara will fight it out – but Sagan is very good and you can see that he’s ambitious.

If Liquigas had played it differently at Sanremo then he would have won – Nibali started it but couldn’t finish it off.

Vanmarcke is young but you don’t have to teach those Belgians any tricks about how to win, it’s ingrained in to them from when they first race as schoolboys.

Pozzato is too lightweight for me; he doesn’t seem to have that killer punch.

PEZ: And if you were Cav’s coach, what would you be talking about?
BH: His weight – he’s an amazing sprinter but he’s too heavy.

If your job is ‘professional road racing cyclist’ then you have to be able to climb.