He’s more Australian than most folks from ‘Down Under’ – despite the fact that he’s from Gent in the heart of Flanders – he’s currently writing a history of Australian cycling; he’s the Drapac team’s European Co-ordinator; he’s a photographer at the Gent Six day and he’s PEZ’s biggest asset and chauffeur at Het Nieuwsblad – he’s Dirk Van Hove. And he’s also the man who keeps the stats on the ‘Aussie Cup’ – but more of that in a moment. We spoke to him recently about all things Aussie bike racing.

PEZ: Dirk, what’s with the Aussie fixation?
Dirk Van Hove: It started in 1983; I chatted to Gary Wiggins (Bradley’s father and 80’s six day star, ed.) at the Gent Six Day, then the next day I bumped into him in the street and we went for a coffee, that was the last coffee we ever drank – it was always pils after that!

We became friends – he was my best friend, I used to take him to kermises in my van

In 1984 his friend, John Siotas – who was an Aussie, but born in Greece came to race in Belgium and I organised a place for him to stay.

Then there was David McFarlane, he was Aussie road race champion and rode the Giro for Santini-Conti.

Then there were another two in 1985 and it’s just carried on from there. 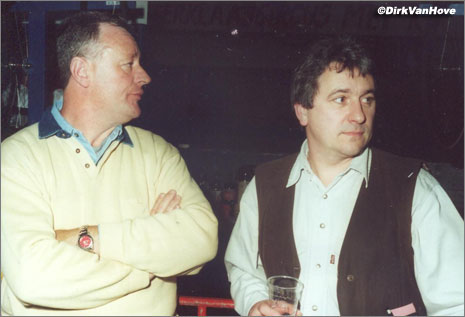 PEZ: And you’ve been to Australia a few times?
DVH: I’ve been eight times; I love it – particularly Alice Springs but Tasmania and Victoria too.

PEZ: Tell us about the ‘Aussie Cup.’
DVH: Its roots back a long way, to the 80’s when I’d take guys like David McFarlane, Peter Besanko and John Mullan to races in my van – back then we called it the ‘Anzac Prijs.’

The guys knew they couldn’t win but it an unofficial award for the best finisher on the day, just some fun.

In early 2011 I decided I’d start a classement for the most successful Aussie rider of the season.

I awarded ten points for first down to one for finishing – irrespective of the race.

I figure that if a young Aussie wins a kermis, it’s like Matt Goss winning in Sanremo – there are no easy races in Europe.

I applied it to all Continental, Pro Continental and Pro Tour riders – but Cadel was still the winner. 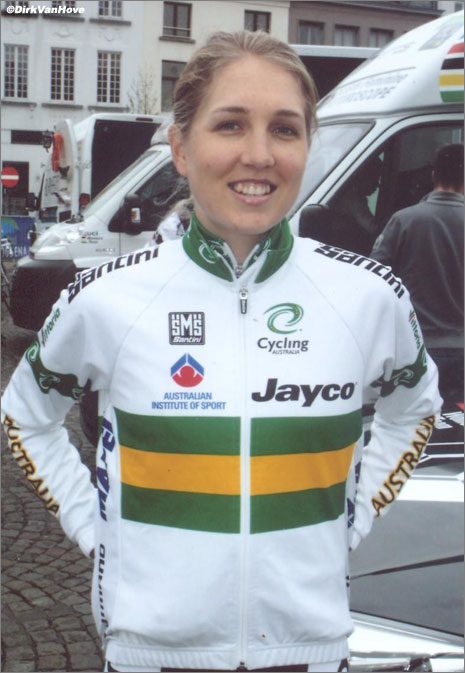 PEZ: But it’s not been as successful as the women’s classification?
DVH: For the guys there are so many awards and competitions – although it was popular with the young Continental and Pro Continental rider there was little interest from the Pro Tour guys.

But the women’s competition has started to take off – I received a call from the Sidney Morning Herald telling me that it was ‘Women’s Day’ in Australia, they’d heard about the Aussie Cup and ran an article.

Then Caroline Clarke of the Australian company SCM got in touch and said that she’d like to sponsor the competition.

She was pretty keen and said that she’d want proper presentations made for the awards.

To that end, John Trevorrow who organises the famous Bay Crits – Matt Goss, Robbie McEwen and whole host of other top Aussie names are riding – in Australia will have the ladies’ Aussie Cup presentation during the series on January 4rth.

Shara Gillow won it this year and next year we hope to make it an even bigger competition; but even so, Shara will lift $1,000 Aus. 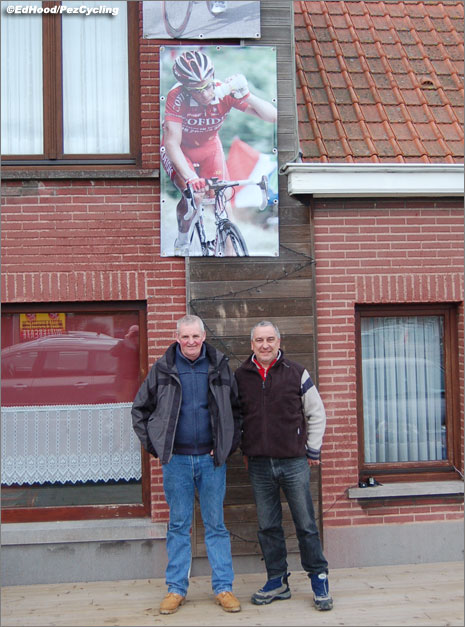 PEZ: Why do you think the Aussie riders are so successful in Europe?
DVH: They’re very strong an adventurous; they come to Europe when they’re young and have to work hard – they’re not spoiled like a lot of the European riders.

And once they’re here and doing well, they want to stay at the top.

Look at Mitchell Docker, he was on Drapac, which is Continental, then he went to Skil at Pro Conti level and now he’s with GreenEdge and Pro Tour.

And by the way – if you want a potential future Paris-Roubaix winner, he’s your man! 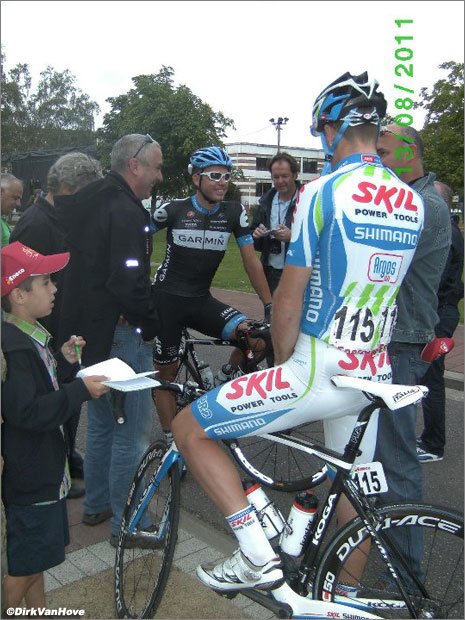 There are so many to choose from, Brett Lancaster (GreenEDGE) is one of my favourite riders and a good friend – Jack Anderson (Endura), Lachlan Norris and Tom Palmer (Drapac) are all good guys. 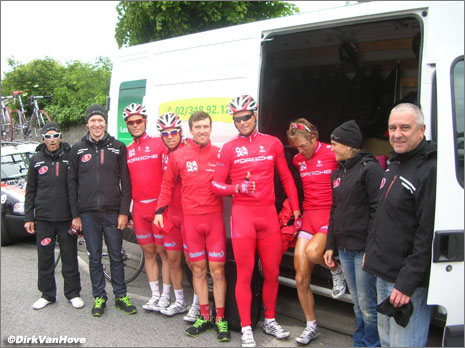 Van Hove with the Drapac team at the Ras.

PEZ: Tell us about your connection with Drapac.
DVH: Because of my Aussie connections, Michael Drapac – the man behind the team – contacted me in 2008 to see if I could organise accommodation and transport for Darren Lapthorne to make a racing trip to Belgium, that was in 2008 and one thing lead to another.

This is my fifth year and now I have the role of European Co-ordinator for the team – I organise the race programme, accommodation and vehicles for the team’s annual campaign to Europe.

I organise my holidays from my job to coincide with their visit. 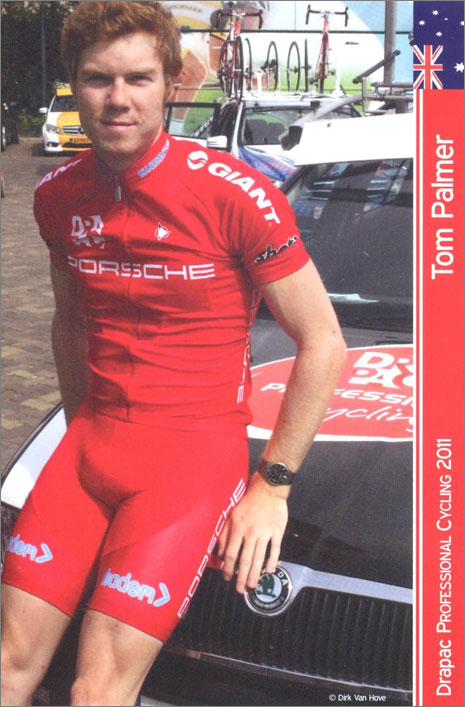 PEZ: Who’s the fastest Aussie, ever?
DVH: It’s hard to say, right now it’s Matt Goss – but Robbie McEwen ‘back in the day’ was one of the fastest men I’ve ever seen in my life.

PEZ: And the toughest?
DVH: Danny Clark – no question! 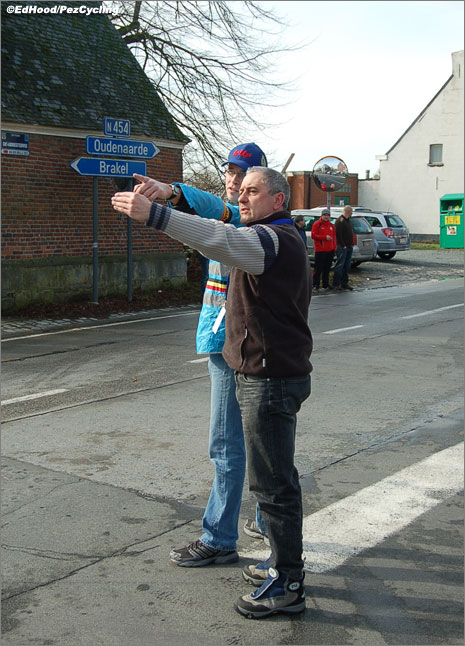 Getting directions at the Belgian season opener, Het Nieuwsblad.

PEZ: What’s your favourite race?
DVH: The Ronde – it has to be, I’m from Gent!

Even if it’s raining it’s the still the most beautiful race in the world – in fact, the rain makes it more beautiful!

PEZ: And is the Tour Down Under worth the same number of UCi points as Paris-Nice?
DVH: The Tour Down Under is the first race of the year and everyone wants to win as soon as possible – it’s a great field, even though some treat it as a bit of a holiday.

It’s a hard race to get a start in – Drapac would love to, but it’s not possible.

I think the race is a big boost for Australian Cycling – it puts it on the map.

PEZ: GreenEDGE – could it be another Pegasus?
DVH: They’ve recruited a whole bunch of good Aussie riders – and there’s proper Aussie dollars behind it.

I don’t know that much about the team but I do know that an Aussie Pro Tour has been a dream for a long time.

PEZ: Final question – do you have a boomerang?
DVH: Of course!

And a didgeridoo – and I love my Vegemite!

PEZ In The Trenches: The Rotterdam Six Finale

Santos Tour Down Under ’12: Pre-Race Roadside