He’s been top three in Qatar, Nokere Koerse, the Giro, the Pais Vasco – and now he’s finally stood on the podium step that gives you the best view of all. We spoke to Tour of Britain stage seven winner; 21 year-old Ben Swift (GB & Katyusha) on Monday morning.

PEZ: Your first pro win, congratulations, Ben.
Ben: Yeah, it was pretty special; I’ve been chasing it all year! The Worlds will be my last race of the year, so it’s a good way to end the season – I’ll be starting the 2010 season on a high.

PEZ: You must have used up all your bad luck on stages two, three and four.
Ben: Definitely! Stage five went well, I helped Pozzato in the finale – he was second to Boasson Hagen. Then on stage six, I was in the break with Geraint Thomas (GB & Barloworld) and Ian Stannard (GB & ISD) – it’s one of the best breaks I’ve ever been in; but Columbia wouldn’t let us go. It was late when they got us back, but we made them work for it! 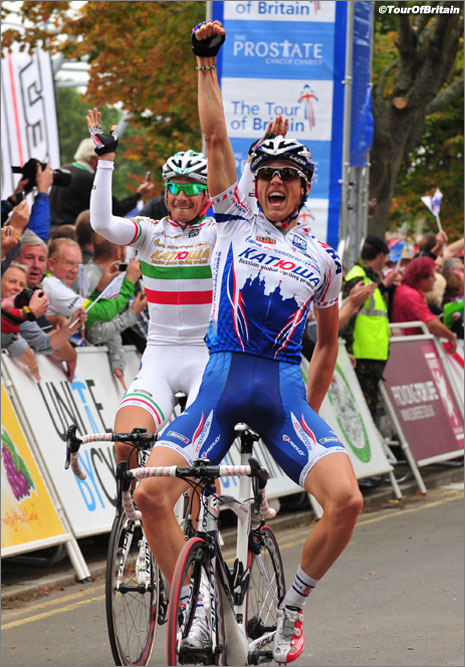 PEZ: Was there a plan, before the stage?
Ben: I was designated sprinter for the day, yes.

PEZ: Talk us through the finale.
Ben: In the last 10 K there were a lot of attacks coming; there was a GPM which started at six to go, that suited me because it made it tough. Geraint Thomas attacked on the climb and it was lined out over the top, then he was caught. Karpets took over for us and the Pozzato lead me out through the bends, I came off his wheel with 150 yards to go.

PEZ: I heard it was a bit hairy in the finale?
Ben: Yeah, the corners were a bit dodgy, one guy who was on my wheel came down – we slid out and clipped the barriers, but I knew that if I held Pozzato’s wheel then I’d be OK.

PEZ: The Italian champion and Primavera winner leading you out!
Ben: That gave it the edge; he was so happy for me after the finish, too.

PEZ: Does Robbie McEwen coach you on your sprinting?
Ben: Not so much coaching but he gives me little tips, now and again. He’s actually the only guy on the squad that I haven’t raced with this season – due to his injuries. He helped me a lot at the first team meet, he made the effort to come over and talk to me – he knew who I was and what my results were. It’s really special because when I was a youngster, I had a picture of him on my wall; and here I am in the same team, getting advice from him.

PEZ: You’ll have been the centre of attention since the win?
Ben: Yeah, yeah, I nearly missed the start in London! But it’s nice and it comes with the territory. 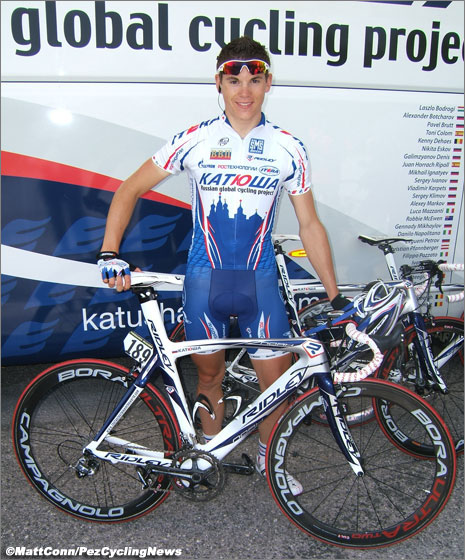 PEZ: How was stage eight; the final one into London?
Ben: I was a little tired after stage seven; I was sore all day with being in the break all day on stage six – that day was constantly up and down. My job was to help Napolitano but I couldn’t get to him to help him get position – the last five kilometres were really fast and it was hard to move up.

PEZ: Champagne or Russian Vodka to celebrate your win?
Ben: Champagne – I think that it has to be a full complement of Russian riders on the race before we get into the vodka!

PEZ: You’ve been round the Worlds course, what do you think?
Ben: Super hard! I think there will only be about 20 finishers, there are 19 laps with two climbs each lap – that’s 38 climbs giving 4,600 metres of climbing. It’s basically up, down, up, down – off the first descent, there’s a dead corner at the bottom; if you’re not in the first 20 you’ll be stopped. Off the second climb there’s about two-and-a-half kilometres to the finish; it’s very deceptive – open, exposed and will be extremely hard on the last laps. 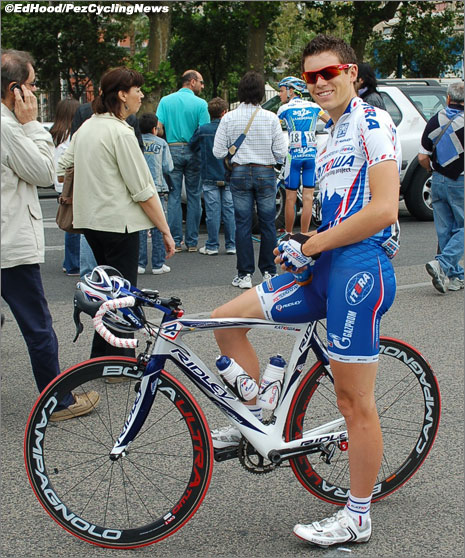 PEZ: Who’s GB team leader?
Ben: We’ll be talking about that in detail when we all meet, but it’s liable to be David Millar, he won the time trial in the Vuelta and is obviously in very good form.

PEZ: Who’s your Worlds favourite?
Ben: It’s hard to bet against Valverde, Cunego will there be too – I think it’ll be a group of five or six at the finish.

PEZ: Those ‘Swift to Sky’ rumours aren’t going away.
Ben: No, no, maybe next year, though!

***
With thanks to Ben for his time and wishing him ‘all the best’ for Sunday.