In between races at the Copenhagen Six Day race PEZ managed to catch up with Danish National Road Champion and new BMC signing Sebastian Lander. The likeable young Dane talks us through his big season ahead of him on the WorldTour and his hopes and ambitions for the seasons to come.

One of the surprises of the European national championships weekend in June came in Denmark, where 21 year old Sebastian Lander shaded all of the Pro Tour riders, including the mighty Saxo Bank to land the title for his Glud & Marstrand-LRO team. It was this win that brought Lander to the attention of PEZ’s Gordan Cameron and was enough to pick him in his 13 Neo-Pros To Watch in ’13 feature but the reality is that Lander has been getting good results for a longtime before that magic day in June.

He has been winning Danish titles since 2006 when he took the National Points Race. A result he defended in 2007 as well as winning the European Youth Olympics Road Race in Belgrade. A stage win in the junior Giro della Toscana and third in the junior road Worlds were the hi-lites of 2008. And in 2009 he claimed a rainbow jersey in the junior points race.

The start of 2010 saw him triumph in the UiV Cup U23 race at the Copenhagen Six Day in the colours of the Danish Concordia team before finishing third in the U23 Liege-Bastogne-Liege and taking a stage in the Coupe des Nations (the UCi U23 international race series) in the Ville de Saguenay in Canada.

In 2011 and still with Concordia there were strong international results, with top 10’s in the Porec Trophy in Croatia and the U23 Cote Picardie and Frankfurt City Loop.
But 2012 with Glud & Marstrand was the break through with another stage in the Ville de Saguenay and the Danish U23 and Elite Road Race Championships.

A regular participant at the Copenhagen Six Days up through the age categories and competing in the elite six day this year, Lander took time to talk to PEZ about his championship win and his upcoming season with the BMC ‘Super Squad’ on the day that his team mates in the red and black skinsuits blasted the opposition in the Tour of Qatar team time trial.

PEZ: Where are you from and how long have you been cycling, Sebastian?

I’m from Koge, about 20 kilometres from Copenhagen and I’ve been riding since I was 13 – road and track. 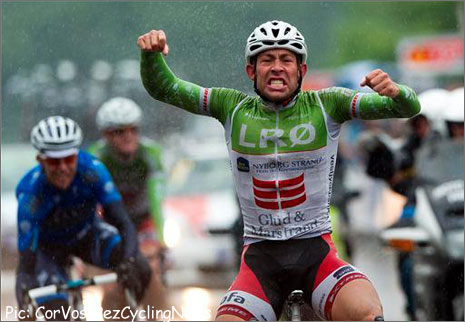 Sebastian taking the win at the Danish Nationals.

PEZ: Tell us about your championship win.

I was working for the team that day; we decided not to wait for the Pro Tour guys – to attack from the start. That’s why I went away after just 500 metres and was part of a small breakaway for the first 120 K.

One of the first guys to come up to us was Michael Morkov (Saxo Bank), that was at maybe 130 K. The group grew to around 15 guys but the speed and the weather made it a very hard day – and there was an 800 metre climb of about eight or nine percent on the circuit, that had to be climbed 20 times.

Guys were dropping off all the time with the wet and cold – Chris Anker (Saxo Bank) went, then Jakob Fuglsang (Radio Shack). When Fuglsang was dropped, I decided to take my chance with Niki Sorensen (Saxo Bank) and we went away.

I punctured but luckily I got a really quick change because I didn’t want Fuglsang to come back to us. At the end I out sprinted Niki and my team mate Andre Steensen – I was off the front for 200 K in 12 degrees and wet, that day. But it wasn’t just a victory for me, it was for the team – we finished first, third, fourth and tenth. It showed that you can beat the big teams if you take the race to them – Sorensen was second, Chris Anker fifth and Fuglsang seventh. 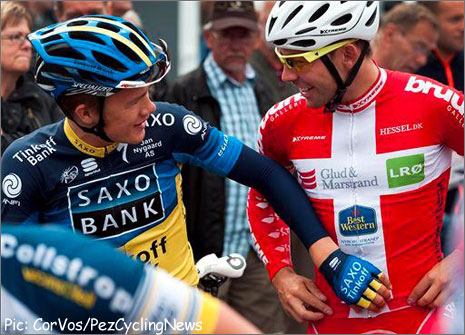 That’s as close as you’re getting mate! At the Tour of Denmark ’12, SaxoBanks’s Christopher Juul-Jensen gets his hands on the jersey that escaped he and his team at the National Championships.

Yes, I was fourth in my first race, the Ster Van Zwolle in Holland and felt good – like I could be at the front in races. I was ninth in my second race the GP Lillers in France then fifth in Dwars door Drenthe in Holland and was top 10 in all of my first events. But I needed a win – that came in the Nations Cup race in Canada.

And once you get the confidence from that first win then you get better and better. Two weeks after the Nations Cup win I took the Danish U23 National Road Championship and was in the teams which won the National Team Pursuit and Team Time Trial Championships. When the Elite National came around, I knew I was strong enough.

PEZ: How did the ride with BMC come about?

My agent spoke to a few teams, but Rolf Sorensen made a call to Max Sciandri at BMC – they’re good friends. Rolf did an excellent job for me and I was offered a contract. 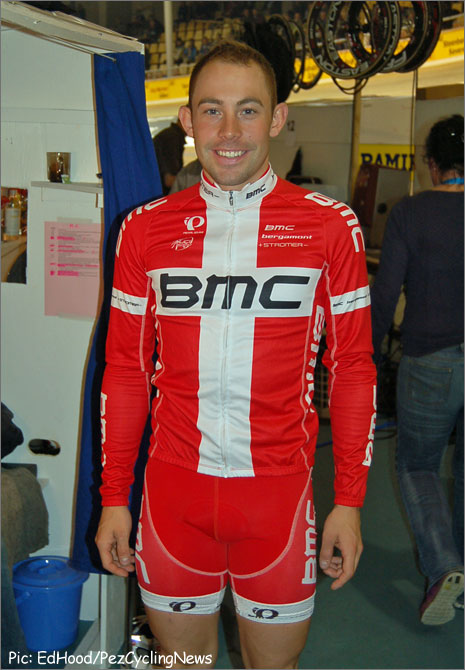 With Lander having the Danish Champ’s jersey and his teammate Martin Kohler the Swiss version, Team BMC have two of the best looking jerseys in the peloton.

PEZ: How does your programme look?

My first races are in Italy, I have the Trofeo Laigueglia on February 16th and then the GP. Cite de Camaiore on the February 28th. That second one is on a hilly percorso, but we have to find out what my limits are so as we know what I can do for the team.

We’re already off to a terrific start with Brent Bookwalter winning in the first stage in Qatar, and then them winning the TTT. I think that much of the motivation for that win came from the guys wanting to help Brent keep the jersey – that’s how it is in the team.

PEZ: What’s your role in the team?

I’ve been a cyclist for ten years but I’m starting over at this level. I have to learn, see what I can achieve – U23 is one level, but World Tour is another.

PEZ: Have you attended training camps, yet?

Oh yes! I’ve been with training with the team for one month, already. I did two camps of 14 days, one in December and then one in January.

They’re really nice guys and the atmosphere is like a big family – there’s no one moaning because someone goes up a hill too fast or any stuff like that. The organisation is perfect and when I’m out on a ride with maybe Thor Hushovd or Cadel Evans, I can’t believe that it’s happening to me. These are the guys I see on TV and here I am, training with them, it’s like a dream come true.

PEZ: Is the team OK about you riding the six days?

Yes, I think it’s good for my speed, perfect for a rider like me. The six days gives you speed to go with the power you build during your road training. 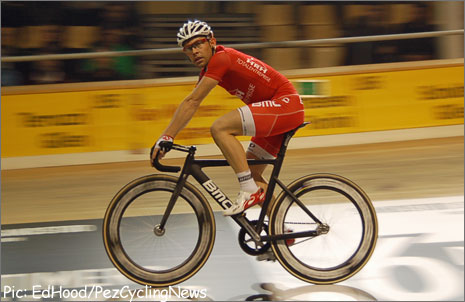 Sebastian in action at the Copenhagen Six.

PEZ: Will track figure much in your programme?

It’ll be mainly road. I want to progress – and my dreams are on the road. But racing here is good, it gets you into the race rhythm and you’re contesting sprints all the time.

Next winter I’d certainly like to ride Copenhagen, again.

PEZ: How are you feeling in the six day?

Today I feel good; my level is getting a little better every day. Tonight is an important tradition in the Copenhagen Six Day – the 75 kilometre handicap madison.

But you know the six days are strange, you can feel good and go shit – but you can also feel shit and go good! 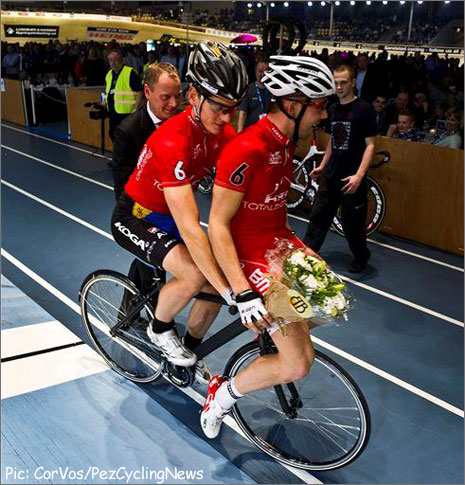 Sebastian rode the Copenhagen Six with Dutchman Nick Stopler although their style was a little unconventional….

PEZ: How big with the public is bike racing in Denmark?

It’s a popular sport, every day there will be mentions on the TV and in the papers. I think we have six Continental teams in Denmark?

But the trouble is that a lot of the stories in the media are about Armstrong and Rasmussen. People have to understand that it’s not what happened five or ten years ago which is important; it’s the future that matters. I believe that the sport is clean now – I trust the people around me.

PEZ: What’s your biggest goal as a professional?

PEZ: And if you could win just one race?

Paris-Roubaix, it’s a fantastic race with such spirit – and suffering.

Catching Up With Martijn Verschoor!