US trackman Bobby Lea will soon be on the boards of Paris fighting for the World pursuit gold medal, so our ‘6 Day’ expert, Ed Hood, talked to Bobby after a successful outing at the Berlin 6. With over twenty Elite titles to his name, there’s a good chance of adding a Rainbow jersey to that total in the French capital.

The USA team has a realistic contender for a medal in Bobby Lea who took bronze in the London World Cup omnium and has recently been polishing his form on the six day tracks. Originally Bobby was to be riding the omnium; a combination of the flying lap, 40 K points, the kilometre, pursuit, elimination and scratch race. But as there is now a clash between the pursuit and the omnium he has opted to go for just the pursuit race. The 2015 track Worlds will be staged in France’s new National Velodrome in South West Paris, between 18 – 22 February. Here’s what he had to say to PEZ when he was preparing to ride the omnium and not the pursuit.

PEZ: Is Berlin your first six, Bobby? – what were your impressions?
Berlin was not my first six. But it was my first Six riding for classement. I’ve done Fiorenzuola (open air summer six day in Italy, ed.) twice with Jackie Simes, and in 2013 we had the Hollywood Three Day. Bremen, a few weeks ago, was my first true 6 Day, and that one was a shock to the system on the opening night! Since I did get one under my belt right before Berlin, I was a little less overwhelmed by all of the extra things that go into a Six Day. It wasn’t brand new. I was able to relax a little more and enjoy the atmosphere, which was incredible in Berlin. As an athlete, it really is great to get to perform on a stage like that. 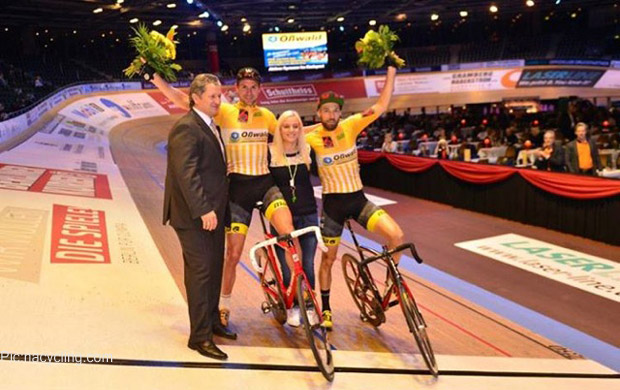 PEZ: How did you get the ride?
Last fall Jack Simes and I began talking about the idea of doing some sixes this winter. After a conversation or two the idea of reaching out to Christian Grasmann to see if he had interest in riding together came up. We’ve known each other for the better part of eight years or so by now and I think the idea of riding a six day together has come up casually but neither of us ever acted on that idea. I think it took one email to him and then the wheels were put in motion. So I really owe this whole experience to him and I’m thankful he felt confident enough in my abilities to take a chance on me as a Six Day rookie.

PEZ: How has acceptance by the other riders been?
This is kind of a funny question to me. I had always heard stories of new riders getting the cold shoulder from the “establishment” but I can say that I received none of that. And if ever there was a place where I could have earned it, Bremen would have been it, when I was making so many mistakes on the first night. But as a whole the riders were welcoming and very gracious as I found my feet and settled into the rhythm of the racing. There seems to be a greater sense of community and camaraderie amongst the Six Day riders than I’ve seen in other parts of the sport. Disagreements happen, tough racing happens, but I really appreciated the overriding sense of professional respect that the riders seem to have for one another.

PEZ: Is riding a big Euro Six something you’ve wanted to do?
I can’t say that I grew up always wanting to do a Six. But as my career progressed my interest grew. By now I can say that I would have been sad if I never had been able to ride a big Six before retiring. 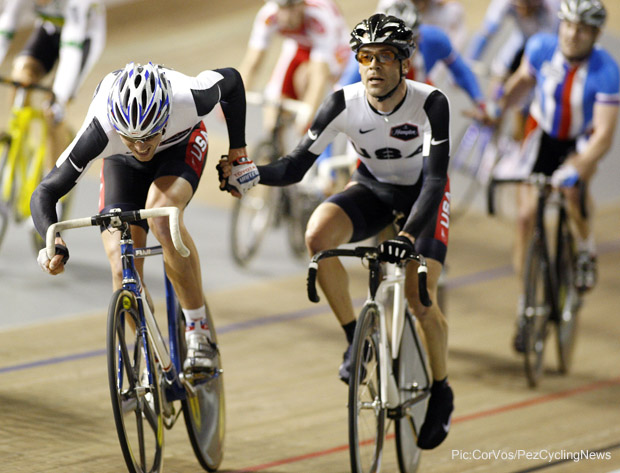 PEZ: I’ve heard some omnium riders say that they don’t ride six days because the low gears compromise your ability to push the big World Cup/Worlds gears?
I was hearing that as well. But I think timing is key. There are so many elements of a Six that are beneficial to omnium racing that I think to write it off entirely because of the smaller gears may be a little short sighted. One or two races won’t destroy your ability to pedal a big gear. Along with the obvious fitness benefits from racing hard for six nights in a row, I think the technical elements of the racing are a huge benefit. You learn to read a race much quicker, especially on the smaller tracks. Positioning in the bunch becomes more critical. I think it really helps you sharpen your racing skills.

At the World Cup level you need good tactics but really strong legs can make up for some mistakes. But I think on a Six Day you have to be perfect straight throughout. There isn’t so much room to fix mistakes and I can say that I think I’ve improved my ability to race a bike from my Six Day experience.

PEZ: Is it true that you first raced at four years-of-age?
I sure did. My parents have been racing for about 40 years and they weren’t about to stop just because I was born. My little bike was thrown in the van and if there was a kids’ race, I was in it.

PEZ: And that you have won 40 US titles?
The tally of elite track titles right now is 23. If you add in junior, U23, collegiate, etc then you come closer to 60 I think. The number I enjoy paying attention to is the number of elite titles.

PEZ: How did you get into being an omnium specialist?
To be honest, I got into be an omnium specialist by accident. The UCI announced the change in the Olympic program and that was that. I’m lucky that I’ve always had natural speed and ability to time trial. I know there were more than a few riders who basically had to throw out any Olympic ambitions because their skill set was either not conducive to the Omnium or their country had other riders who were so much better in the omnium format.

PEZ: Tell us about training for all those different disciplines, please.
As you might expect, it really is a mixed bag. You need to have the fitness to handle six events over two days. You need to work every end of the spectrum because not only do you need fitness for a 40k points race but you also need the explosive power normally attributed to sprinters for the kilo and the flying lap. It’s really about figuring out where your strengths and weaknesses are, and then fitting the puzzle pieces together in the right order. 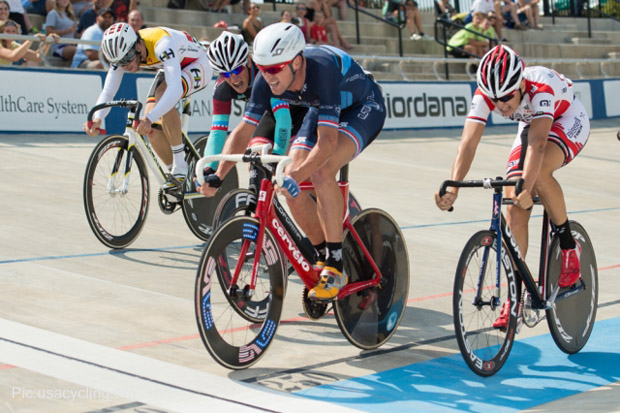 PEZ: That was nice ride in the London World Cup – bronze.
Thanks, I didn’t really know what to expect from this World Cup season. Of course the goal is to be a medal contender in Rio so it was a pleasant surprise to go to Guadalajara and come up with a medal. But sometimes these things can be a fluke. So I was especially pleased to back up that performance with a medal in London.

PEZ: But no ride in the Cali World Cup?
The goal is the World Championships and Cali didn’t fit the scheduling just right. We as a country are now in a very nice place with Olympic points so it gives us some flexibility.

PEZ: And a nice ride in the Pan Am pursuit with 4:16
Thanks, again that was another one of those rides that I was pleased with not so much because of the ride itself but because it validated previous performances. Like I said, a big ride is nice but it’s even nicer when you begin to develop a track record of consistently performing on that level. It’s about repeatability, right?

PEZ: Which disciplines do you need to work on in the omnium?
If you asked me that last summer I would have said the kilo. But my kilo times are coming down nicely. They aren’t quite where I want them yet, but I am trending in the right direction and time is on my side with regard to Rio 2016.

PEZ: You’re not on a team this year, isn’t that difficult financially?
You mean I am not on a UCI Continental team, right? I ride for CustomVelo.com, which is the online retailing side of Pure Energy Cycles in Lambertville, NJ. They have done a fantastic job supporting me in varying degrees over the last five years. I also have excellent relationships with my other industry sponsors such as Cervelo, ENVE Composits, Rotor Bike Components, Fizik, Osmo Nutrition, D2 Shoes and Oakley just to name a few. It’s different because at the end of the day the buck stops with me and my agent at Kinetic Group Sports. But having that level of direct involvement with my sponsors and that kind of control over my equipment gives me a lot of satisfaction. And it allows me to do trips like the one I am on right now without having to worry about how it fits into the early season plans of a domestic road team. So to answer your question; no, it’s not difficult. It’s different than the typical model. But it’s been working out wonderfully. 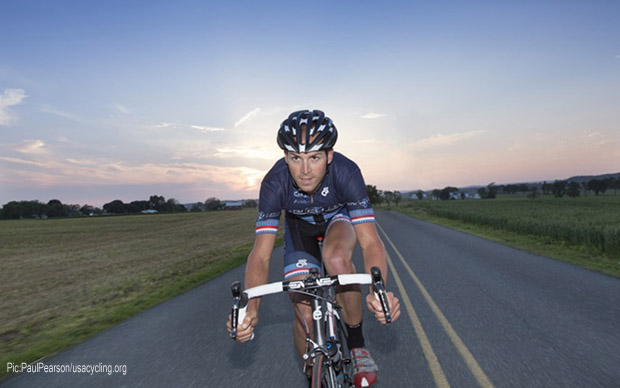 PEZ: Does the US crit scene fit in well with your track training?
The domestic criterium scene does fit quite well into my track training. I am fortunate to have a great racing scene in eastern Pennsylvania. We have a really great local scene that offers more opportunities to race than one can normally take advantage of. And we are also fortunate enough to be centrally located for a good run of national level racing in the spring.

PEZ: How is you lead in to the Worlds structured?
With the fitness from Bremen and Berlin under my belt it’s basically about doing some work in the mountains to keep the power and some track work to fine tune a little.

PEZ: Any Worlds predictions?
I don’t like predictions. I think I know what I am capable of but you never know until race day. And that’s why we race. 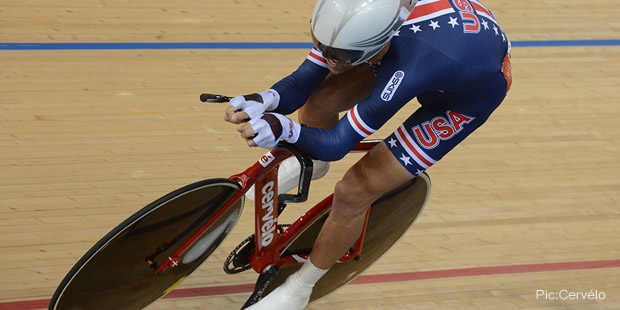 Area Zero-D’Amico-Bottecchia in Croatia for the GP Laguna