If nothing changes over the course of this winter then there will be something missing from the Pro Tour start lines in 2011. The Caisse d’Epargne team folds at the end of this season and so will end a dynasty that runs back to the days of Reynolds in 1980. Australian team DS Neil Stephens is just one of many whose careers will have to change direction. Neil was driving the Caisse team car at the UCI 1.1 Circuito de Getxo-Memorial Ricardo Otxoa when we spoke to him – the day after Luis Leon Sanchez’s triumph for the team at the Classica San Sebastian.

PEZ: Congratulations on San Sebastian, Neil.
Yeah, it was a good day, it finishes off all the good work the team did in the Tour.

PEZ: The Tour was maybe a wee bit disappointing for Caisse?
We worked well, got in all the breaks, but we were trying to win the team classification and so were Radio Shack, that meant we found ourselves closely marked. When we saw we were leading with around a week to go we decided we had to go for it, you don’t just give it away. The fact that The Shack tried so hard to win it shows that it’s something that’s well worth winning – you’re on the podium in Paris. 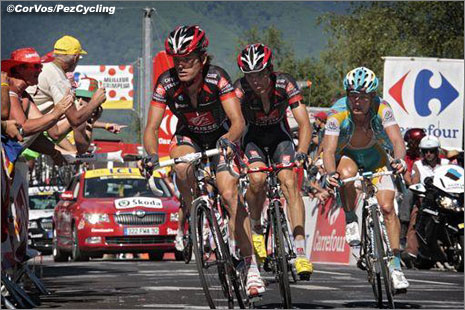 PEZ: San Sebastian – is cycling big in the Basque Country?
All sport is a big deal in the Basque country, football is number one; but pelota (high speed team ball game) and cycling are very popular. Euskaltel is based here and there have been some big riders – Miguel Indurain and Marino Lejaretta being the biggest. You just have to go to the Pyrenees during the Tour and look at the number of Basque supporters that are out.

PEZ: Is the political climate more stable?
As with all of these situations, it’s a small minority who cause the problems. I’ve lived there for 20 years and never personally experienced anything; but you do read about it in the newspapers. 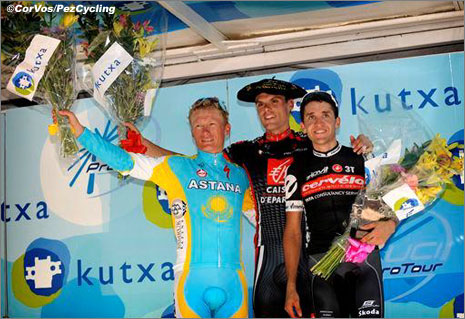 PEZ: And where is ‘home.’
Olartzun, about 10 kilometres from San Sebastian – the Classica went through it three times, yesterday.

PEZ: Why Spain for you?
I originally came to England in the early 80’s to pursue a pro career with ANC but my dad died and I had to go back to Australia to deal with family affairs. After that, when I returned to Europe, I went to Italy and actually didn’t think I was going to make it as a European pro. I returned to Australia and got a job but was selected for the Worlds so I came back to England to prepare – that was 1987. In 1988 I got a ride for a Belgian team and started to go pretty good by the end of the season – particularly in the Tour of Holland. Matthieu Hermans got in touch with me and asked if I wanted to ride with him at Caja Rural in Spain for 1989. I agreed and decided that I wanted to stop all the moving around from country to country and settled in Spain. I rode for Artiach and Paternina before I signed with ONCE where I spent five seasons. 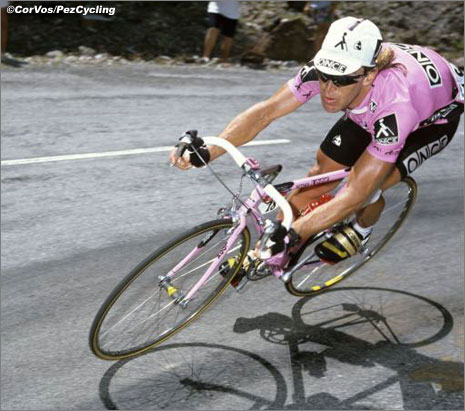 PEZ: How many seasons were you pro?
From 1984 to 1998, people think; ‘you musta made some money?’ but the fact is that it was only in the second part of my career that I had decent contracts. For the first half I had to work in Australia over the winter to subsidize my pro career.

PEZ: A Tour de France stage win in Colmar, 1997 – your best result?
It’s my most famous result and of course it’s very satisfying to have won a Tour stage but I think I did my best rides in the service of my team leaders. On Bastille day in the 1995 Tour we had three ONCE’s in the break for 200 K – Laurent Jalabert, Melchor Mauri and me. At one point Jalabert was yellow jersey on the road and we nearly wrested the lead from Indurain – that was a great day. 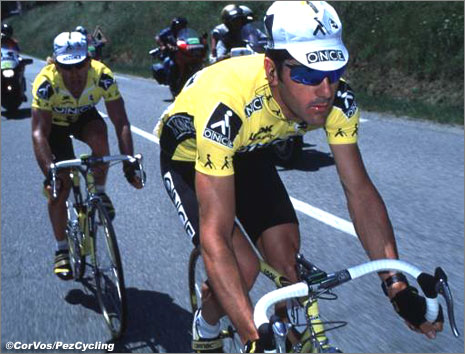 PEZ: How long have you been a DS?
Since 2005 but I have been in that role for the Australian pro national team since 1998. I was involved in a cycle tour company when I quit racing – Bikestyle Tours. Manolo Saiz asked me to help at Liberty Seguros which was the Spanish branch of the US insurance company, Liberty Mutual. He didn’t speak English so I had a PR role. Then Liberty became Astana then I moved to Caisse.

PEZ: We all know of Saiz demise but he was an innovator, wasn’t he?
He was, he’d been Technical Director with the Spanish Cycling Federation and he was the first DS not to be an ex-pro. He loved all the technical aspects – training, diet, bikes and he was really into race tactics. He was also the guy that took team buses to the next level. He was a fiery character, but I learned a lot from him.

His big rivals were Banesto – it was as fierce as the rivalry that exists between Real Madrid and Barcelona – that team had been Reynolds, before it was Banesto, then it became Illes Balears and now it’s Caisse d’Epargne.

It’s ironic that now I should be with the squad that was our biggest rival, back in the ONCE days.

At Caisse they’re cooler and more calculating than they were at ONCE and I think it’s good that I’ve experienced both schools. I’m also lucky because I’ve worked with Shayne Bannon from Australian Cycling, he’s been very influential upon me. 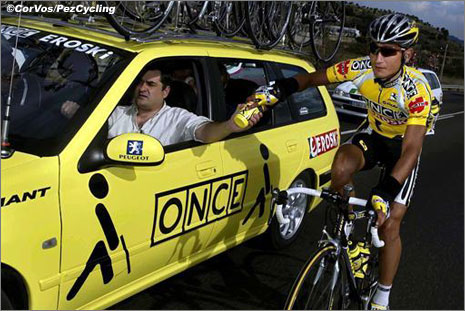 There’s also much more emphasis on diet, training, bio-mechanics – the one percent improvements. You can’t do half a job any more; you just have to look at teams like Saxo, Garmin and Sky – the sports science, the physiology . . .

PEZ: What qualities does a DS require?
I can only talk about my qualities; I still feel like I did when I was a rider so I know their needs – but I also have to aware of what the sponsor needs. Nobody likes to suffer on the bike but sometimes that’s what it takes to get a result for your sponsors. And it’s not just about the riders, there’s the mechanics, phsyios – my style isn’t to be a dictator, they all know they can talk to me and suggest other ways to do the job. It’s about balanced decisions, you have to look at how what your doing affects the whole picture. 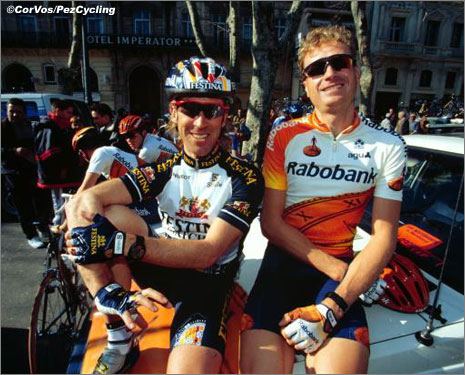 PEZ: ‘Grinta’ – are the riders of today as tough as they were 25 years ago?
I tend to think that maybe they’re not – I was disappointed with that stage to Spa in the Tour. If there was a crash on oil, ok, let the guys get back on but don’t go on strike, don’t annul the stage – what about the fans ? what about the stage town ? It just makes cycling look stupid.

And Schleck’s chain coming off; that’s racing – get on with it! Contador mixed the truth on that You Tube video, he didn’t see that something had happened to Schleck but he didn’t need to say anything. Any DS would have sent their man on the attack and left Schleck to it. Miguel Indurain would simply have said, ‘bad luck’ and that would have been that. What’s refreshing is that not one DS criticized Contador – no DS would have said, ‘wait.’

PEZ: And Caisse are moving on.
They’ve saturated the market with their name, they’ll move on to another sport. Look at Motorola, they originally came for three years but stayed five. Companies move to other sports – cars, motor bikes, yachts. I believe Caisse are going to sponsor the French Olympic team. 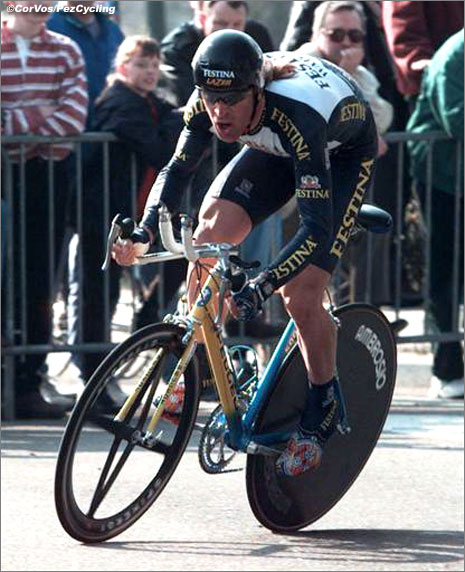 PEZ: What’s next?
I can’t say too much, but I’m talking to a couple of teams. It’s been a fantastic three years with Caisse – but you have to move on and I’m comfortable about my future.

***
And the Circuito de Getxo? Francisco Jose Pacheco took Xacobeo Galicia’s first big win of the year. With thanks to Neil, a man who lives for today and tomorrow, not in the past.