Rider Interview: Season 2015 will see a third American rider joining the mighty Giant team of Kittel, Degenkolb and Dumoulin; Lawson Craddock and Chad Haga will be joined by Optum’s Carter Jones – just reward for a season which saw the 25 year-old figure prominently in every major US stage race.

On the eve of the biggest season of his career Jones took time to talk to PEZ.

PEZ: Congratulations on the Giant ride, Carter – can you tell us how the contract came about?
I first started speaking with Giant at the Amgen Tour of California this past year. My DS at Optum Jonas Carney has developed a good relationship with one of their directors (Aike Visbeek) by moving Chad Haga up the previous year. Jonas was kind enough to facilitate the introduction at the race, and then we continued to talk throughout the season after that. My consistency at Utah and Colorado is what really got talks moving forward.

PEZ: We believe you had more than one approach from Pro Tour squads?
Nothing serious, and once Giant approached me I truly believed out of any World Tour team they would be the best fit for me. The schedules that Lawson and Chad rode this year, and other riders who have come up through the program, made it very apparent that they care for your development and will give you opportunities. 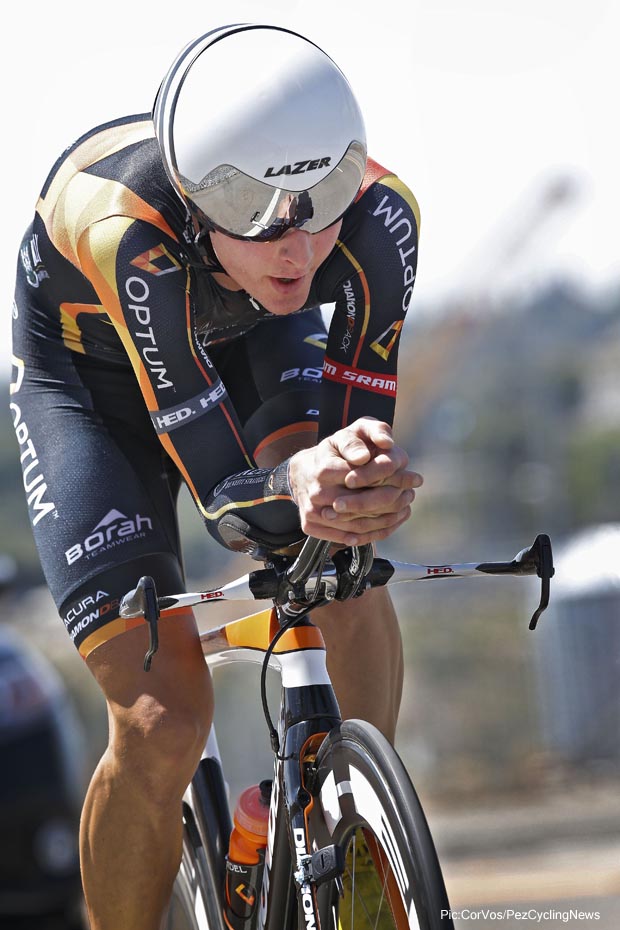 PEZ: Where will ‘home’ be in Europe?
I plan on living in Girona, España with Chad Haga. As an American, or English speaker in general, Girona is a no brainer in terms of making life as logistically easy/comfortable as possible. I figure I will have my hands full with adapting to the racing, so I want to make my home life as comfortable as it can be. Thankfully I will have six other teammates there, and countless other American friends, so I am looking forward to it.

PEZ: How’s the Vlaams doing?
Pretty nonexistent; ‘yo practicar Español.’ That said, I have a feeling I am going to need to pick up some phrases throughout the year. The first thing I learned at October camp was how multinational the team is, it really is incredible to hear all of the languages at the dinner table. Thankfully the team’s official language is English. 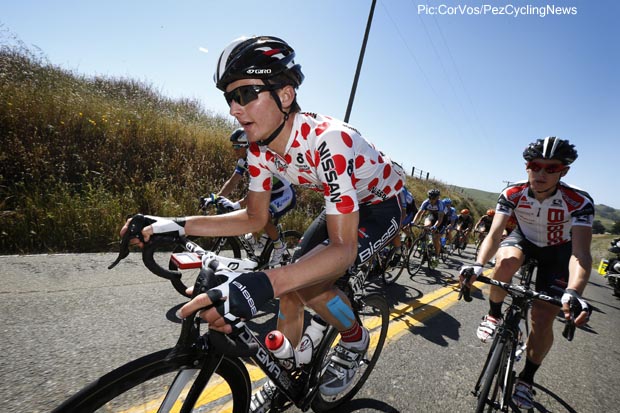 PEZ: You’ll have been cross examining Lawson and Chad?
As I mentioned before, the racing opportunities they had this year really impressed me. It is also very nice to have two friends on the team to help smooth my transition into the program.

PEZ: When’s the first team get together?
Already had an October media camp, no bikes, was great to bring me into the loop though. The first team camp is in January.

PEZ: Do you have any idea of your programme, yet?
We spoke briefly about it at October camp, a lot depends on how I progress throughout the season. It is possible that I am getting thrown into the deep end, which would be quite to my liking. I know I start the season with Oman and go from there. One thing I realized last year is that as a 25 year old, teams are no longer looking at you as a developmental project, but more as what can you do for them now. That said, I believe I have developmental potential, and the team does as well.

PEZ: Was your king of the mountains win in the 2013 Tour of California the ‘break out’ ride?
I would say the KOM at the T.of C. was what got the ball rolling back in the right direction. 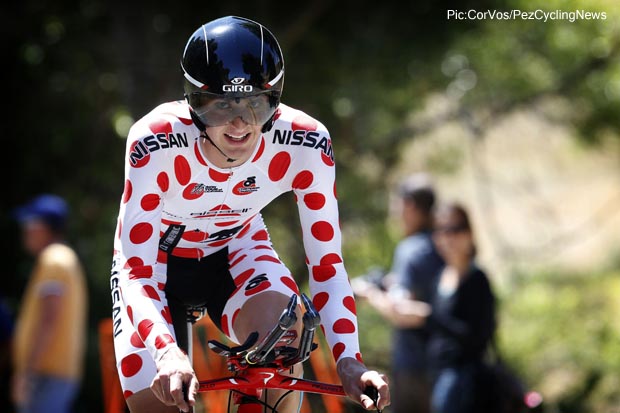 PEZ: You started 2014 in Mexico but were DNF . . .
Yea that race was quite the experience. I will spare you the details, but myself and a couple teammates got very ill during the race and needed to withdraw. We struggled with whatever it was for over a month, and honestly I thought I had lost my season. I was able to pull it back together for Gila, but was lacking the base to maintain the form through the T.of C.

PEZ: The Volta ao Alentejo, racing can be kinda wild in Portugal . . .
What a great race, I love the aggressive uncontrolled racing style of Euro UCi 2.2s. That was my first race back after Mexico so I got to race it more for fun which was great. Pressure free per se.

PEZ: You won Gila – a nice start to the US season.
That was the goal, although actually pulling it off was surprising. I would have been up there in 2013 had it not been for a untimely mechanical on the Mogillon stage. That gave me the confidence to target it this year. It was also a massive advantage having such experience on Optum to help guide me through the stages tactically. Will Routley saved me on the Gila Monster day by defending against time bonuses. 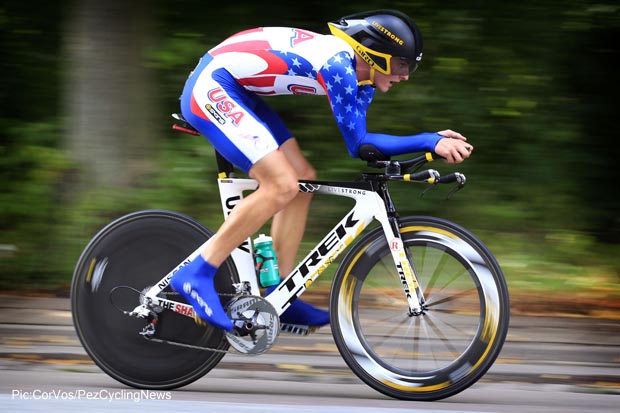 PEZ: California, 11th from dnf in 2012, great progress.
Well, DNF (I didn’t even finish a stage in the bunch!), KOM, then 11th. A nice progression as you said. The DNF was a learning experience, I had a bad crash at Redlands that year and it took me quite a while to recover from a concussion. Winning the KOM gave me the confidence to target GC for Utah and Colorado that year, and then again ride for GC this season.

PEZ: Utah seventh from 40th in 2012 and Colorado eighth from 43rd in 2012.
For me 2012 was a learning experience. It was my first year out of U23, I had the crash at Redlands, and I was not quite sure what to expect from the step up in racing. I really need to thank Chris Baldwin that year, he took me under his wing that fall where we did a month of training together. Every day 10 am at his place; we evaluated every aspect of cycling, training, recovery, diet, etc. – all in preparation for the Tour of Southland that year. There I had the leaders jersey until the afternoon stage of the last day. I was gutted to lose it, but really that was the start of the upswing that lead to the KOM at the aToC the next year.

PEZ: You were originally a baseball player?
Baseball was my life growing up, traveling summer leagues, played in high school.
I thought I was going to Major League Baseball until I played against a couple guys who were actually going to the MLB. I picked up cycling in high school; I remember riding the trainer in the dark after ball practice! 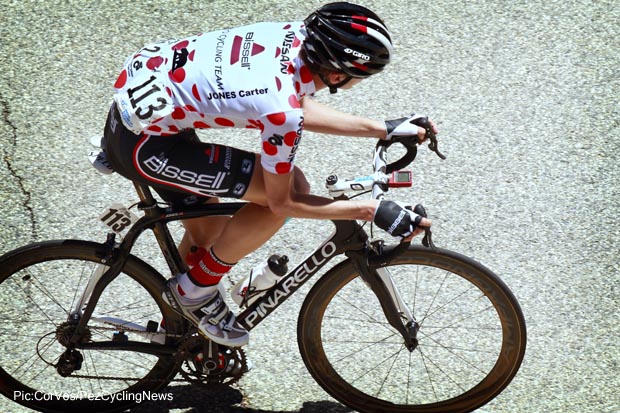 PEZ: And you have TWO degrees, how did you dovetail study with training ?
Well, one of the biggest questions teams had for me is what took you so long to develop. So I definitely suffered per se. I was able to go over to Europe every year pretty much as soon as finals ended (May) to do a big summer block with the U23 National Team. San Dimas and Redlands just happened to fall over spring break, so I didn’t miss too much class. My grades probably would have been better if I wasn’t tired from training, but I would say cycling was my priority and I got through college. Also, I was not that good as a 19-20 year old, I didn’t think I could make it to the World Tour, or at least the path there wasn’t so obvious. So not going to school would have been crazy. Also, going to college is expected in my family, so it wasn’t an option not to (and thankfully I wasn’t good enough to make it an option). Looking back I wouldn’t do it any other way, it is reassuring having an education to fall back on.

PEZ: Are you still with Hunter Allen – all those intervals . . .
I worked with Stephen McGregor from Peaks for six years. He is a big reason why you see such a steady progression from me throughout my career. He also taught me how to train and target races which is why I was able to be consistent the past two seasons.

PEZ: How will that fit in with Giant’s coaching system?
Unfortunately I will not be working with Stephen after this year. I will be working to Mattias Reck from Giant. Thankfully both of them are on board to communicate and make sure my transition is as smooth as possible. Not just now, but throughout the season as well. I believe it is important to have one program and stick with it, so getting advice from two sources could potentially be conflicting and really mess with my confidence or commitment to workouts/training. Again, thankfully Steve understands and is happy to see me progress to the World Tour. It was the goal all of these years after all.

Obviously I have racing ambitions, but the key to next year is going to be getting settled living in Europe and learning the new races. Every race I do will be new to me, not to mention the increased level of competition. Hopefully I find myself in a Grand Tour. Speaking with Mattias the most important factor in my development is going to be adapting to the racing. 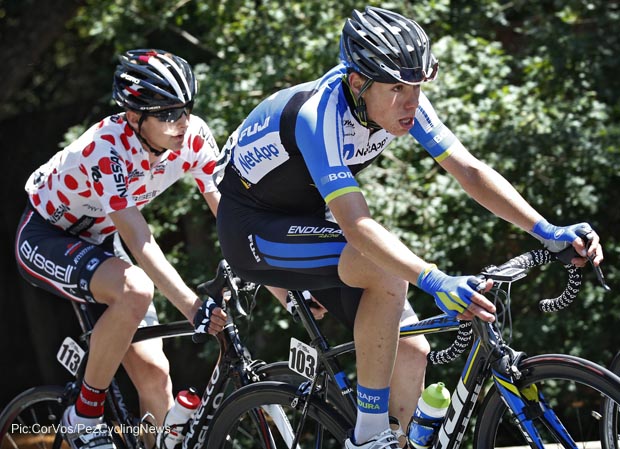