It was last November when we first spoke to Tom Faiers; after taking the ‘tri route’ into cycling he made his race base in Espana where some strong rides caught the eye of Footon-Servetto’s DS, Matxin. A two year pro contract was signed and he was off and running – but how has the Pro Tour been treating the young man from Cheltenham? We thought we best find out…

PEZ: Are you still getting stick about the jersey design, Tom?
Personally, I have not had one negative remark but I keep hearing them going on about it on Eurosport.

PEZ: Where’s home?
I’m in Cheltenham, England at the moment, training, the weather has been very good in England. In Spain I share an apartment with my Aussie team mate, Johnny Walker – it’s near Alicante. I chase the weather between the UK and Spain – if I’m not in a heavy training block then I’ll base in the UK but if I want to train hard, doing four and five hours then I’ll be in Spain – the roads are better, the traffic is lighter and it’s easier to get to big climbs.

PEZ: How’s the programme been?
Philly, Castile y Leon, Flanders – well, 180 k of it! Gent – Wevelgem, Tour of Asturias. My programme hasn’t been heavy, they’ve been easing me into it. I’m having a three week rest period then I’m into a heavier programme, kicking off with the Tours of Austria and Burgos.

PEZ: I think you rode the Tour of Belgium, too?
Yes, I’d never raced in Belgium until this year, it wasn’t as hard as the Classics even though the weather was pretty bad – wind and rain. The thing you quickly learn about racing in Belgium is that positioning in the bunch is very important.

PEZ: Which performances are you most pleased with?
I did a good TT in the Tour of Asturias, I was 26th at 1:12 on Benat Intxausti of Euskaltel who won the stage – that was only my second time trial ever and I was best from the team.

The other performance was in a Spanish one day race called La Rioja, it’s a 1.1 – I didn’t finish but I did a lot of work to set our guy Aitor Perez up for the finale, he finished second to Angel Vicioso of Andalucia-Cajasur.

PEZ: Biggest surprises in the Pro Tour scene?
The speed on the climbs is relentless and the last hour is insanely fast and dangerous; those two factors and getting used to the distance, Spanish amateur races are around 120 K but pro races are all 200 K. 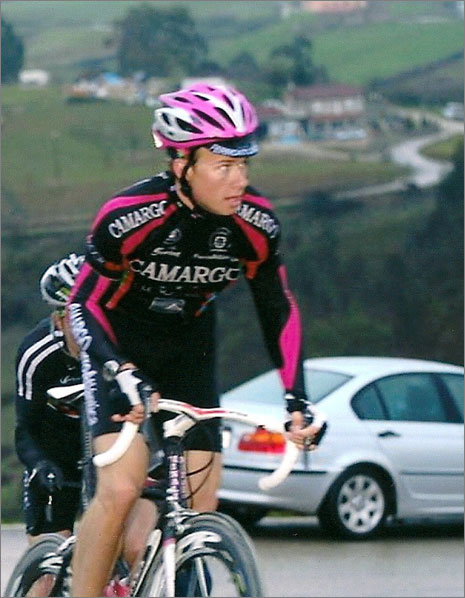 PEZ: The team hasn’t had a lot of wins, how’s morale?
We have easily the weakest of the Pro Tout team rosters but we’ve had five wins, 11 seconds and eight thirds, so I don’t think we’re the poorest performing team by any means. The team started with a clean slate, young riders that management could work with and develop – the average age of the team is only 24 and management are very happy with how things are going.

PEZ: The pros are weight obsessive, are you getting lighter?
What I do is to train before breakfast and that helps, but generally I watch what I’m eating – if you turn up with any fat on you, management are right down on you.

PEZ: How has training changed?
Longer hours, more consistently – four hours at a time. And you have to do work behind the motor bike to get your leg speed up – the last hour of races is just so fast that it’s the only way to train for it.

PEZ: What’s your role in the squad?
Time trials are something I’d like to specialise in but as a first year pro your job is to work for the team – chase breaks down and work for the team. I think I’ve been doing that job – they know if I go on the front I’ll ride hard.

PEZ: The best thing about being pro?
I love the travelling, I’ve seen so much of the world, the hotels are great, we have a nice team bus, I’m always signing autographs – off the bike, it’s a cool life.

PEZ: And the not so nice?
It seems impossible to win a race, it’s just so hard in the finales; everyone is so good and I’m suffering more than I thought I would.

PEZ: Do you feel you’re making progress?
Definitely, the standard of racing is getting better as the guys get fitter, I’m feeling strong but maybe tired – I think that next season I’ll see the benefit.

PEZ: Will we see you at the British National Champs?
I don’t know, we have an altitude training camp to prepare for the Tour of Austria and I think there’s a clash – Austria is a race I really want to do well in.

PEZ: Sum up your first half year in the Pro Tour.
A very good experience, I’ve learned so much, the standard is harder than I thought it would be but I’m pleased with how I’m going. I have a two year contract, so I’m looking forward to next season, already.

***
‘insanely fast and dangerous’ – sounds about right! with thanks to Tom for his time and wishing him all the best for Austria.