Christmas Eve in Belgium, you’re an American cyclo-cross rider, far from home; what do you do? Watch ‘It’s a Wonderful Life;’ or maybe break training and have a Duvel or play your favourite Dead Boys CD to remind you of home? Nah! Get the pork chops on, bake some cookies and talk to Pez – that’s how Cannondale-Cyclocrossworld.com’s Jeremy Powers handles it!

PEZ: You rode Middelkerke in the snow, last week?
Jeremy: Yeah, I had a good start and felt strong, but as the sun went down, it got really cold and I lost a lot of power in my legs. It’s always to get the first race in Belgium out of the way; you always feel a lot of pressure before it, so I’m glad it’s done – Sven Nyss won. 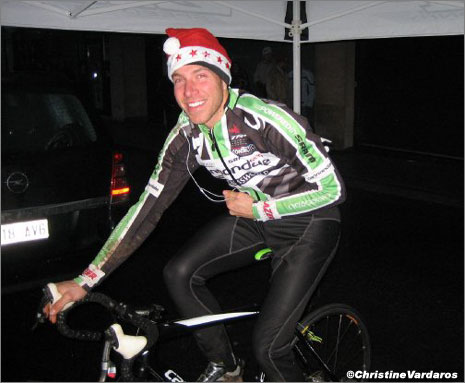 Jeremy gets ready for some Christmas Cross!

PEZ: Bad luck in the US Nationals.
Jeremy: I was leading for half the race; there was this icy off camber section, after the stairs and as the race went on and the sun shone, it melted on the surface, I slid, fell and twisted my bars. I remounted immediately but had to hop off and straighten the bars, I lost 20 maybe 30 seconds and when I went into the pits to change bikes, I lost maybe another 15 seconds. It was a fast course and you just couldn’t afford to lose time like that on it. In every other title race, the rider who went off fast, out front, held on to win. I knew I had good legs, I won at Portland and I’d trained hard for it.

PEZ: Cross is getting big, Stateside.
Jeremy: We’re getting there, trying as hard as we can, people are beginning to see that it’s a lot of fun and very exciting. There’s a lot of rivalry between us on the bike, but off it, there’s a lot of friendship. Not like in Europe; here the rivalry is for real. 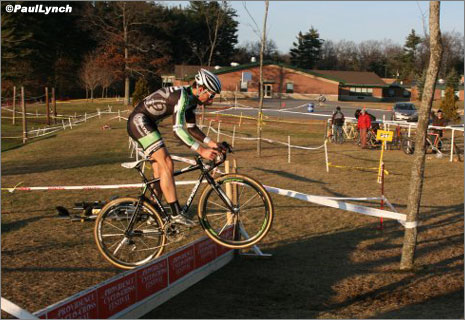 When it comes to barrier hopping – Jeremy is the man.

PEZ: How many years have you been making the pilgrimage to Belgium?
Jeremy Powers: I was over for the Worlds at Tabor in the Czech Republic in 2001; but I’ve been to Belgium every year since 2003. In ’04 and ’05 I had full seasons here, but for these last three years, it’s been December to February. I’m doing it a little different this year; I’ve bought a house in Massachusetts and have stuff to deal with, so I’m going home from the 5th to the 20th of January. But I’ll be back for the last big races of the year – and the Worlds, of course. If folks want to see my full race programme, it’s all on my website – but I’ll be racing three or four times a week.

PEZ: Where do you stay, in Belgium?
Jeremy: We have an awesome apartment near Ypres – it’s a converted barn, there’s a big kitchen and plenty of room for the bikes. It’s support from Cyclocrossworld.com which makes it possible.

PEZ: With such a big race programme, do you have to train much?
Jeremy: I learned quickly that you don’t ever try to build form, here – you have to bring it with you. If I have a mediocre day in the States, I’m still in the race, here I’d be 17th or lapped! But on the other hand, I think that if I have a great day here, I can make the podium – that’s my goal for this year. 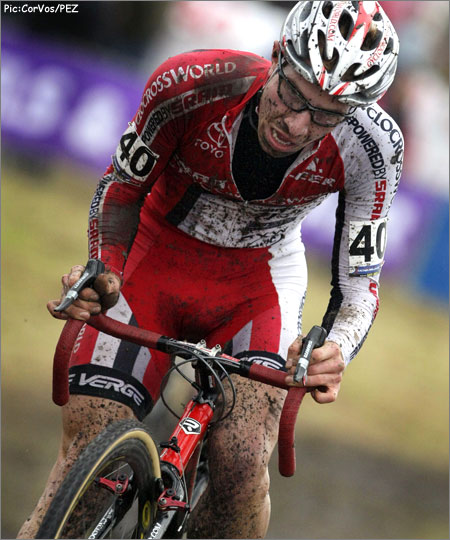 PEZ: What do you do mechanic and soigneur-wise?
Jeremy: We’ve made a lot of friends over the years over here, and they help out. SRAM supply our equipment and their Euro division helps us out, too. As the years have gone past, we’ve got more and more support.

PEZ: Christmas day, are you racing, what about dinner?
Jeremy: We’re not racing tomorrow; we had some awesome pork chops, tonight and made some cookies – semi healthy jobs, and there’s an abundance of coffee. I don’t go crazy, I’m here to race, that’s my job and what I get paid for! 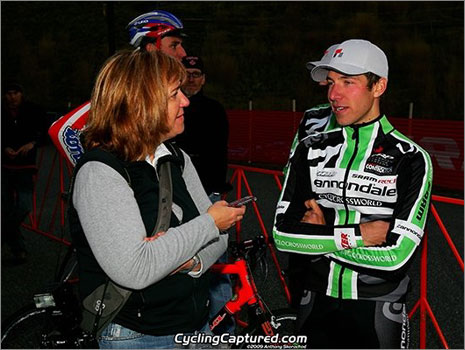 PEZ: Equipment – do UCI minimum weight rules apply?
Jeremy: Absolutely! And there are no disc brakes or suspension allowed.

PEZ: Snow – what do you ride?
Jeremy: We have an arsenal of beautiful tyres, courtesy of Cyclocrossworld – Dugasts; they’re just great. I rode 34 mm Dugast Typhoons yesterday, they just roll over the ruts, but you have no idea the difference it makes, riding 34, rather than 32 mil tyres – it’s night and day.

We use cooking oil – what you’d cook eggs with – sprayed on the bottom side of the bike and on the chain to stop the snow from sticking. You can use WD 40, but it’s not as good on the chain. Sand is the problem; it sticks to oil – that’s why checking the course out is so important.

Clothing plays a huge part; it’s always better to have too much rather than too little clothing on. You keep wrapped up until the last minute but yesterday, I’d actually forgotten how cold it gets as the afternoon goes on.

With shoes, you’ll see that guys use silicone to seal up the front vents and keep the water out. A thing that I notice in Belgium is that shoe covers are being used more and more – it’s strange to see guys running with over-shoes, but they’re very effective at making sure you don’t get frozen feet.

PEZ: Which conditions do you like?
Jeremy: I hate Belgian mud! It’s not like the mud back home, it’s nasty, nasty mud, thick and nasty! Back home, we’re competitive with the continental guys; but it’s different here, when the stuff is 10 centimetres deep – so, mud’s my least favourite!

I like any course that’s hard, fast and with punchy climbs. Some guys do the rain dance before races – not me! 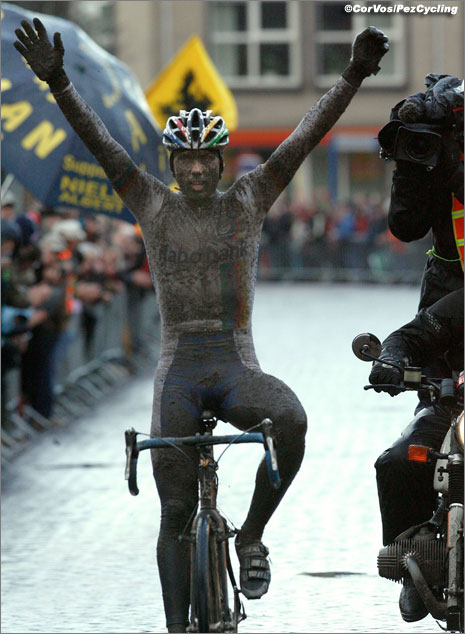 PEZ: There’s good money at stake, now.
Jeremy: There’s 10,000 euros up for grabs in a big race here. But the prize money goes to the federation and it’s maybe eight months before you see it. But even back home, if you win a cat one, there’s $2,500 at stake.

PEZ: Have the US Worlds selections been made?
Jeremy: Not officially but there are five guys who really want to go – me, Tim Johnson, Ryan Trebon, Jamie Driscoll and Jonathan Page; we were all top six in the Nationals.

PEZ: It’s a big focus for you?
Jeremy: It’s a huge next 25 days for me. I’d really like to make a podium in Belgium and I’ll be doing two small blocks of intense training when I’m in the US as preparation for Tabor. I know the course; I’ve heard it’s a little different since the last time I rode it, but I know the area. It’ll almost certainly be on snow and it’ll be fast; that’s how the Czech riders like it, and they’re conditions that suit me. 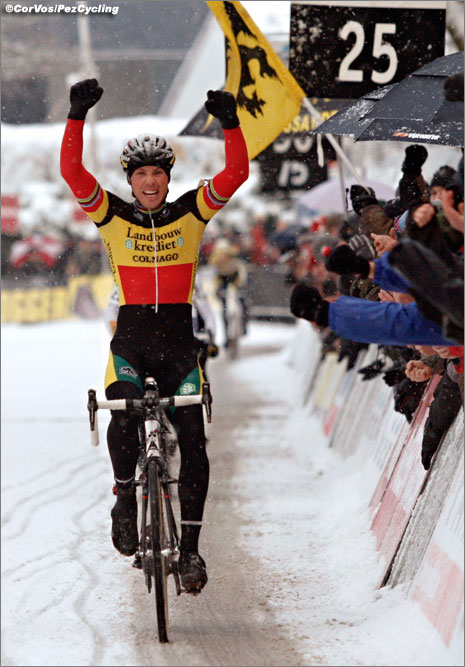 Sven Nys hasn’t been up to his typical cannibalistic, dominating self in 2009, but a repeat Belgian Championship is on the cards in Jeremy’s opinion.

PEZ: Nys for the Belgian champs?
Jeremy: For sure, he’s the most mature rider and knows how to pick the perfect spot to make his move. Tim Johnson rode a waiting race in the Nationals, he’s my team mate, so he didn’t ride against me, but he watched and waited. Nys, does that, he sits and waits for the moment – his timing is perfect.

PEZ: The Worlds?
Jeremy: Stybar for the Worlds, I’d put money on that; maybe the only thing that’s against him is that he’s been going so good for a while now, he has to fade at some time. But he has home town advantage – and watch for Simunek too! 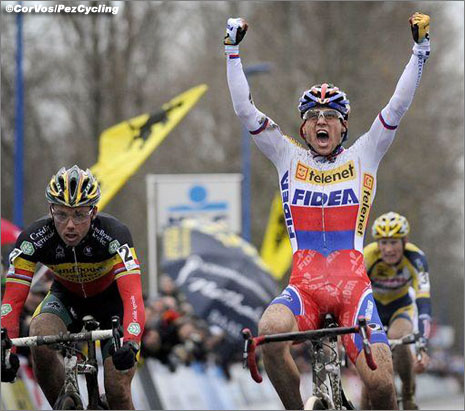 Jeremy Powers is putting his money on Stybar for Worlds.

PEZ: Final question – Belgian radio?
Jeremy: Oh man, they play good music, but the play the new songs to death – over and over! But then they play awesome oldies – maybe Hall & Oates then some good Michael Jackson tracks. I like the 70’s and 80’s stuff, so yeah, I like Euro radio!

***
He’s a man after my own heart – we wish him all the best with that podium goal and for Tabor.