In the glitz of the European professional season sparking into life it’s easy for results to get missed – take Kristian House’s (GB & Rapha Condor Sharp) win in the Tour of South Africa for instance. We caught up with the former British National Champion after his triumph way down south.

House had a cosmopolitan early career; пїЅI grew up in Austin but used to come back to the UK for the summers; my step dad was a computer programmer out there.

I started racing in Texas when I was 16 пїЅ road and mountain bike.

I got to a good level in the US and was on their Olympic training plan, but then we found out that I was actually English пїЅ they wanted me to change nationalities, but I didnпїЅt want to do that.

I rang up the GB national coach and in 1996 I rode my first race for GB, the junior Tour of Wales.”

I won the Tour of Tasmania, the Ras Tour of Ireland, the Lincoln GP and the Girvan Three Day.

The result that really set me up was to win a stage in the Ruban Granitier in France; it just gave me so much confidence.”

In 2007 House rode for the Navigators team:

пїЅThey were a US team who came over to race in Europe; they were looking for English speaking riders who knew the Belgian scene. 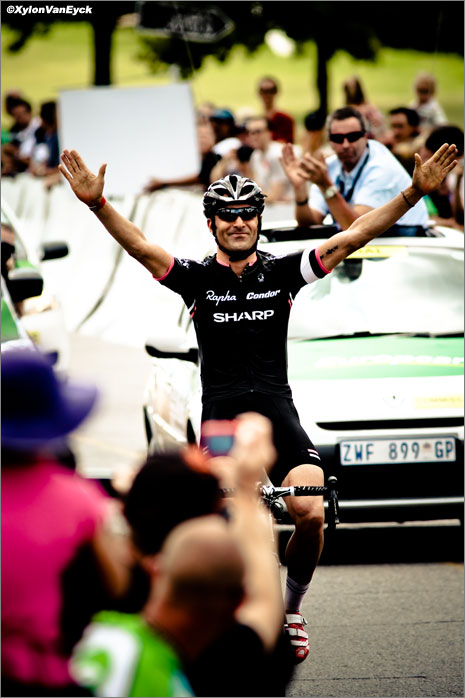 House takes the day and the overall lead in fine solo fashion in South Africa.

Charlie Jackson and John Herety from Recycling said that I should пїЅgo for it,пїЅ so I did.

It was an enjoyable year, I rode De Panne for them and as well as Belgium, we raced in Britain, Ireland, Germany and the US; that was good because I saw a lot of old friends.

At the Tour of Ireland they told us that the team wasnпїЅt continuing; it was one of the oldest teams on the circuit пїЅ 18 years.”

It was in 2008 that House joined the Rapha Condor team пїЅ where he has remained ever since.

HouseпїЅs win in South Africa was based on a speculative stage one breakaway which пїЅstuckпїЅ and thatпїЅs where we pick up the story of his race.

PEZ: That stage on victory, was it pre-planned?
Kristian House: No, it was just a case of covering the moves and making sure we had someone in every attack.

There were a lot of attacks and a lot of chasing early on but when we went the peloton decided пїЅenoughпїЅ and we got the gap.

PEZ: The guy in the break with you пїЅ Blaha (Czech) is European madison champion and a strong six day rider.
KH: IпїЅve raced against him a few times; I spoke to his manager after the stage and he was telling me that heпїЅd come straight from riding three six days.

He had speed, but wasnпїЅt climbing very well; I dropped him then waited for him a couple of times but with 50 K to go I knew that if I kept waiting for him we would get caught.

I wasnпїЅt thinking about the win just the publicity aspect but when I dropped him the gap went from 5:30 out to 7:15 and I started to think; пїЅI could be here for the win!пїЅ

I waited for the lead to drop a little before I started to up my pace and when the gap did drop I started to ride hard.

PEZ: Then you defended for the whole race.
KH: It was stressful but the boys were amazing, they had individual ambitions and I said пїЅletпїЅs not defend thisпїЅ пїЅ but they were adamant and said пїЅno, weпїЅre defending it.пїЅ

They rode amazingly well; everyone raised their game for me.

The trickiest moment came on the last stage when I hit a hole with seven K to go, the impact was so severe that it twisted my bars пїЅ I was just waiting on the tyre exploding.

On stages four and six it was mountain top finishes and I was racing against guys who used to be my team mates пїЅ good climbers.

I think where I actually won the race was on stage four, they were attacking me and thought they had me on the ropes but I actually attacked them.

The reason I attacked was to take pressure off my team mate Jonathan Tiernan Locke who had ambitions on the stage win; after that the attitude changed, they could see the form I had.

PEZ: South Africa, mountains пїЅ and heat . . .
KH: I grew up in Texas so whilst I canпїЅt say that IпїЅm used to it, I can deal with it a bit.

My teammates handled it well too, Zak Dempster is from Australia and Dan Craven is from Namibia so it was no problem for them. 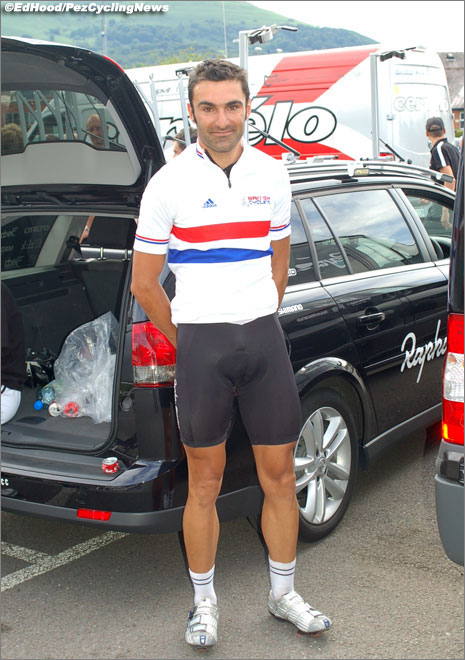 PEZ: There are some good bike riders coming out of Africa, now.
KH: I had some of them as team mates at Navigators пїЅ theyпїЅre good riders.

But the thing about racing in Africa is that itпїЅs not often youпїЅre riding along in the bunch and you see giraffes and elephants at the side of the road!

PEZ: You were winning in Tobago in October then you were second in the Copperas Cove Classic in the US in January пїЅ did you have much time off?
KH: Right after Tobago I had six weeks stripping wall paper in my new house!

But after that I went to the US and put in nine weeks of good training; I did around 7,500/8,000 kilometres so I had solid form to start the year.

PEZ: IпїЅve heard Tobago is a cool race.
KH: Yeah, there arenпїЅt many races where itпїЅs mandatory to go on a glass bottom boat trip or drink beer at a barbecue on the beach!

It was incredibly hot and weпїЅd just come off the Tour of Britain; I won two stages, one which was really a lap of the island – some of the climbs were the steepest IпїЅve ever raced up.

PEZ: In 2010 you won races in Japan, Tobago and the US, as well as the UK пїЅ how do you handle all that travel?
KH: ItпїЅs just something that you do, I travel well and one of my assets is that I have good recovery пїЅ IпїЅve travelled a lot since I was a junior.

PEZ: How does the team get all these cosmo invites?
KH: ThatпїЅs down to our manager, John Herety.

When the season ends and the riders are looking forward to a bit of a rest, heпїЅs starting all over again, working hard on the teamпїЅs race programme.

But we also get races as a result of Rapha пїЅ the Battenkill race came about through Rapha USA and we raced in Japan via the Rapha connection.

PEZ: The Mi-Aout-Bretonne in France is a race you always do well in пїЅ 6th in 2009 and 3rd last year.
KH: I really like the race, itпїЅs well organised and the parcours suit me, itпїЅs that rolling countryside and the temperature isnпїЅt too bad.

But itпїЅs a hard race to target because it comes just before the Tour of Britain пїЅ which is a big goal for us.

That makes it hard for me to think about winning overall; but IпїЅd love to win a stage.

PEZ: New recruits at Rapha, this year.
KH: IпїЅm happy that James McCallum is joining us, heпїЅs a great guy but I think heпїЅs under rated by a lot of people.

And Ed Clancy is just a phenomenal bike rider пїЅ and we have Andy Tennant joining us too.

I was sad that we lost Darren Lapthorne; he got caught in the Pegasus mess but has a ride with Drapac, so heпїЅs happy. 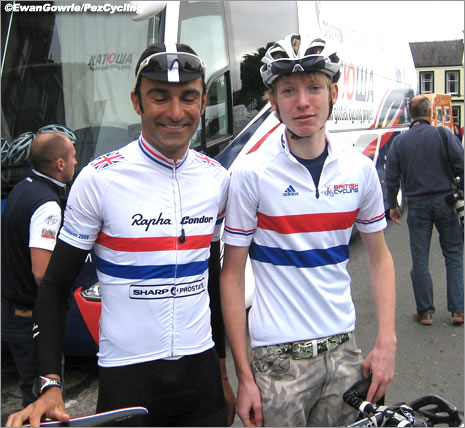 PEZ: Training пїЅ hi-tech or пїЅold school?пїЅ
KH: I did the SRM/Powertap thing when I was younger; now I train on heart rate, I use a Polar.

I do a lot of work on my own, but I include high intensity work пїЅ I donпїЅt go out and just cruise along!

PEZ: Your goals for 2011?
KH: The Lincoln GP; the National Champs course suits me, albeit IпїЅll be heavily marked and weпїЅre riding the Tour of Japan.

The Mount Fuji stage really suits my team mate Jonathan Tiernan Locke and IпїЅll try to help him пїЅ pay him back for all the work he does for me.

The Mi-Aout-Bretonne and the Tour of Britain are objectives, too.

PEZ: And finally, has Cav apologised for his negative remarks about you after your winning the British in 2009?
KH: He gets misquoted a lot and he says stuff tongue in cheek; the night before he won his first Tour stage I received a text from him saying that what was printed wasnпїЅt what he said or meant пїЅ thatпїЅs good enough for me, Cav is Cav!

***
With thanks to Kristian for his time and wishing him well for season 2011.