Last year I bumped into Team Type 1 rider Martijn Verschoor and he filled me in on the facts about being a professional cyclist with diabetes. To say I was impressed would be an understatement. Well, Martijn was in Calpe again training for the 2012 season, so it was back to the Tango Bar for a good chat about this year, next year, diabetes, the TT1 team and…the life of Martijn!

Martijn Verschoor: The year was good. It was a long season – I had 90 racing days last year. I want to get stronger for next year and to progress from the smaller races to the bigger ones. I think I did well last year and so did the team.

PEZ: You didn’t go to the Tour of Rwanda this year?

Martijn: No, this year no…My last race was the Tour of Hainan in China, but November/December is very late for most European programmes. I finished that one (Hainan) and took three weeks rest and started training for the 2012 season after that. 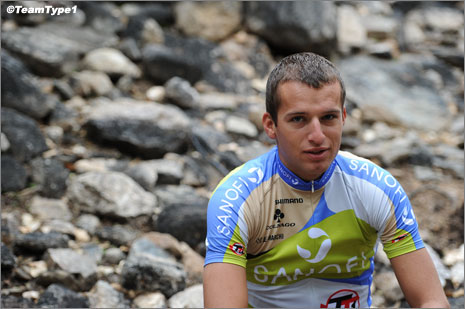 PEZ: The team do a lot of work for diabetes when it’s in Rwanda?

Martijn: Yea, we do a lot of work for the charity in Rwanda as well as the race, which was incredibly hard last year. The African championships were just before the race, and we were all a little bit tired from the European season. The team did well to win last year, because the African teams were very strong. I heard that Rwanda want a Continental team, but they need money for that. They need one big company with money, maybe they have oil? The capital city, Kigali, has money, but outside of Kigali, there isn’t very much. When we are there we see that the people are happy, they are watching the race and the team gives medical supplies to the diabetics. People die there because they are diabetic; they still have witch doctors who tell them to take special tea or something! It’s getting better, but…it’s a different world!

PEZ: So you’ve had a holiday since Hainan?

Martijn: Yea, after Hainan I stopped and went on holiday in Tunisia with some friends, because I like nice weather. It is difficult to get good weather in the off season. I still did some fitness training on holiday though – some days we would play football (soccer) and volleyball. I started training again on the 22nd of November. I did a 100K diabetes charity ride two weeks ago. It was good to do something for diabetes, because it was World Diabetes Day. I was happy I finished it, as I had just arrived back during the night, and then did the ride first thing the next morning.

PEZ: Next year; has the team changed quite a lot?

Martijn: Yea, the team is getting stronger for next year; this year we had good results, maybe without many victories, but with many podiums. The guys were strong in the races that they were meant to be riding well in. We had a win from Alex (Efimkin) in Turkey; I think we won two or three races. He was two times second and first overall. We did great in Turkey. Jure Kocjan was up there in many races as well.

I was getting better in every race also, and then I won a race in Canada (Stage 2 of the Tour de Beauce). I was tired after the Brixia Tour (late July) and also in the Tour of Denmark, but I finished. I rode the Tour du Limousin and Classic de L’Indre and then rested for the second part of the season and rode the Tour of China and finished my season with the Tour of Hainan in October.

Yes, it’s safe to say that I’m happy with my season. The team is getting bigger every year, they are planning towards ProTour, I think next year. The plan was for this year, but if we can ride the Giro d’Italia this year [Ed. TT1 unfortunately missed out on a Wild Card], we can aim at the Tour for next year. It’s better not to grow too big too fast. We have an Italian squad of staff and an American squad, so it’s big and getting bigger and better now. 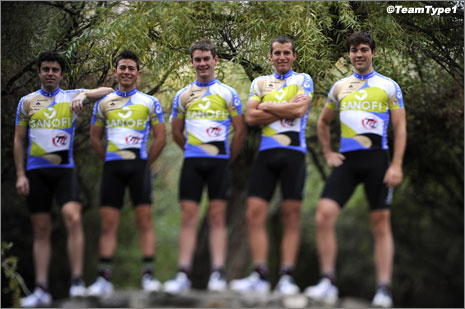 Verschoor with some of his 2012 teammates.

PEZ: What are your main aims for next year?

Martijn: I want to try to be good at the beginning of the season in Belgium, possibly the team will race in New Zealand and Langkawi before that. I don’t know yet, but they will tell me at our training camp in the US. We also will be having a training camp in Italy in January [this week]. I will start in the Tour of Calabria, Italy, after that I will go to the Omloop het Nieuwsblad and Kuurne Brussel Kuurne in Belgium.

PEZ: You don’t do Mumbai this year?

Martijn: We don’t know! Last year it was not my thing, although it went OK. I read they are going to make it a stage race, maybe four or five days, but it’s different from Europe, you know! If I do it, I hope it’s one week, maybe more. There were some people who had problems getting visas, one of my Russian teammates didn’t get in, and he had been there many times with the Russian Federation team before. It’s strange.

PEZ: One of the new Director Sportifs is Frederic Moncassin?

Martijn: Yea, he will be managing me this year. He is so funny! He does wheelies with one hand! I really like him. He was a good rider, how many stages did he win? I think he won two stages in the Tour de France.

PEZ: Do you know any of the new riders who are coming to the team for 2012?

Martijn: I know that they are all strong riders. I think they will all fit in, because we will do a lot of the Classics and more stage races. We don’t know yet if we will do a Grand Tour, like the Giro d’Italia. They are young and they will make good changes in the team.

PEZ: Will there be more guys with diabetes?

Martijn: I think there is one from the development squad coming and an American guy; Joey Rosskopf, he won a stage (Stage 3) and came second overall in the Tour of Rwanda, but he is not diabetic. 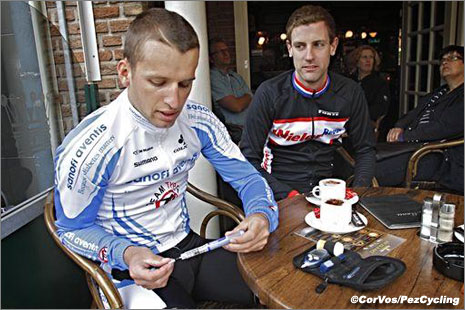 Verschoor prepares for an insulin injection.

PEZ: Do you handle your diabetes just like before?

Martijn: I know this week, with more training, that I need less insulin. When I was on holiday I was injecting more. Now after one week I only need a little bit. The first day is terrible; the most important thing is to do some exercise.

PEZ: After the last interview earlier in the year you spoke to a Scottish guy, Roddy Riddle who is type 1 and used to be a good cyclist, he is now training for the 2013 marathon des sables and will be running across Morocco through the Sahara over 7 days, longest stage is 55miles!

Martijn: What, on a mountain bike? Running! Yes, I read what he said on Twitter, but sometimes I don’t understand some English words! The thing is the higher the temperature the more sensitive you are and he would be coming from a cold place and that’s a big difference, also lots of exercise makes a big difference, training and racing are very different! 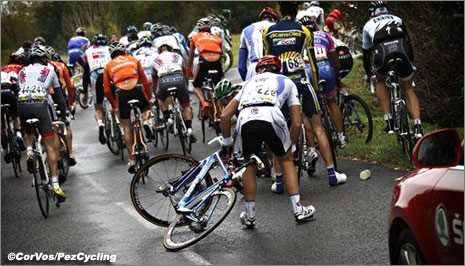 Verschoor getting back up after a crash at Paris-Tours.

PEZ: Did you have any problems this year?

Martijn: No, no big problems, but sometimes I was getting too high, so my legs were full of sugars and with no power. One or two times at the finish, after a mountain stage, I would get a hunger flat. In Turkey, I learnt a lot last year. After a break, I went to the Tour of Turkey, and it was incredible the amount of mountains, up and down and hot weather. I didn’t react much (take much insulin), but I ate so much to stabilise my sugar. In Turkey, I learned that I don’t need to take a lot of long acting insulin, like 50% in the races, so it reacts later in the stage race and in the hot weather. I’m still learning every day; your body is always changing with the diet and when it gets hot. You start to train and after four or five hours training you are tired and you feel the consequence of not training for a few weeks and the first few days are….painful.

PEZ: What about your win in Canada, tell us more about that?

Martijn: Well, I think it was the first or the second stage; it’s all up and down all day in Canada. The team were working very well and we started to make the sprint for two riders, but I got stuck on the left and the whole team were riding on the right lead-out. So I went left and I won the stage. After Mumbai we went to the Tour of South Africa and I got a second place there, I was also happy with that. This year was from the first race I was at a good level and sometimes better! But next year I want be better again. I finished the season in Hainan and there I had six or seven top ten’s and twice fifth, but when you sprint in the top ten it’s very close to victory, I think. If it’s only half a bike or half a wheel then that’s close. I’m getting better every year.

Martijn: I will do the Belgian spring races, which is important for me because I want to know how that goes. It’s possible that I am starting the racing season later, but I’ll be here (Calpe) at the start of January and then the other training camp in Italy and then maybe back to Calpe.

Maybe I will look for a house in Calpe!

***
Martijn still impresses me with his attitude towards diabetes and his racing and training, let’s hope we see him sprinting it out in the Giro d’Italia or the Tour soon! If you want to keep up with Martijn there is his web-site, his twitter and the Team Type 1 web-site to check out.