Things were looking pretty rosy for Tom Zirbel at the end of 2009. He’d won stages at Nature Valley, Fitchburg, the Cascade Classic, and Elk Grove, not to mention topping the US National Racing Calendar rankings. His credentials as a top ‘chrono man’ were endorsed with a second place – behind David Zabriskie – in the US Pro TT champs and an excellent fourth place in the Worlds time trial in Mendrisio. And the ink was dry on a nice crisp contract with Garmin…but then disaster struck.

A drug test after the Pro TT title had tested positive for DHEA; a substance proscribed under USADA rules and known to have contaminated athletics dietary supplements in the past.

We were disappointed here at PEZ having been mightily impressed by Zirbel’s Worlds ride; but writing about cycling does tend to make one cynical, however hard you try to retain your boyish enthusiasm and we filed under ‘another one bites the dust.’

But a year down the line, when two totally independent sources tip you off that the big man from Clear Lake, Iowa was most likely the victim of a contaminated supplement then it’s time to ask some questions.

Tom Zirbel kindly agreed to answer them for us:

PEZ: Thank you for agreeing to talk to us, Tom – you must have been on a big high after your Worlds ride ?
Tom Zirbel: Yeah, I was pretty happy about things. I was close to a medal at a World Championship! That was very affirming for me to go to Europe for the first time and perform well. I’m constantly doubting my abilities and potential so that performance was important to me. And honestly, I’m still proud of it though you won’t see it in any official results. 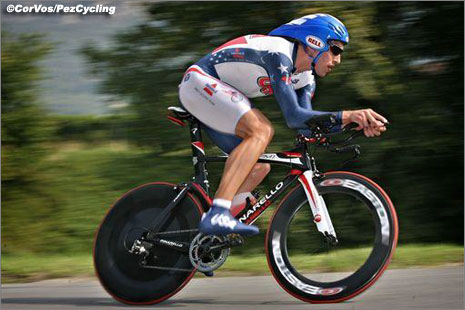 Tom en route to a fantastic 4th place finish at the World Championships in Mendrisio.

PEZ: And all the further to fall ?
TZ: That positive was going to be a blow no matter what performance I was coming off of. Plus, you have to remember that I didn’t receive notification of the positive ‘A’ sample until mid-November; so that was nearly two months after my World’s debut. But yes, that was a bad day.

PEZ: How were you advised of the result ?
TZ: USADA sent me an email and then I received hard copies in the mail the next day. I think they should start using singing telegrams, it might make the news easier to take.

PEZ: Remind us of the proscribed substance, please.
TZ: Even this isn’t an easy question. Officially, I guess DHEA but in actuality it was an ‘Adverse CIR’ that I was up against. That basically means that there was a metabolite of a synthetic substance in the anabolic steroid family that was in my system at the time of the test. 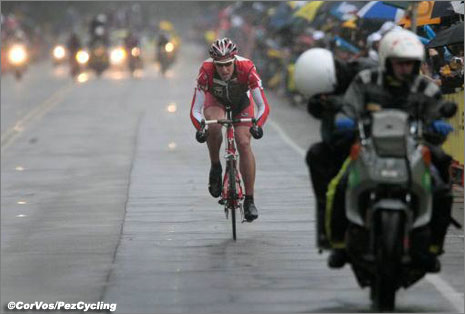 PEZ: How long did it take you to figure out what had happened ?
TZ: I’ll let you know when I do know definitively what happened.

PEZ: Did you have the second sample tested – how long did it take – what was the result ?
TZ: The ‘B’ sample took forever! I thought it was going to take like 10 days or so and it ended up taking close to two months. The reason was that the initial lab had problems with their equipment so the ‘B’ sample had to be retested a different lab. The ‘B’ confirmed the ‘A’ result at this second lab. 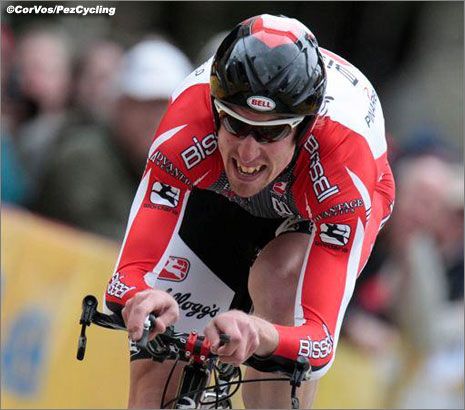 PEZ: What was the US Cycling/UCI attitude to your defence ?
TZ: I haven’t had an official defence. I’ve signed my Acceptance of Sanction with USADA so in that regard I’ve had no defence. The reason that I signed the AoS was that I thought USADA had an interest in assisting me in finding out how this happened. I don’t think that anymore.

PEZ: Why would the contaminant be in the product ?
TZ: If it actually was supplement contamination – it probably has to do with the US’s lax regulatory laws regarding dietary supplements. This law needs to be changed! 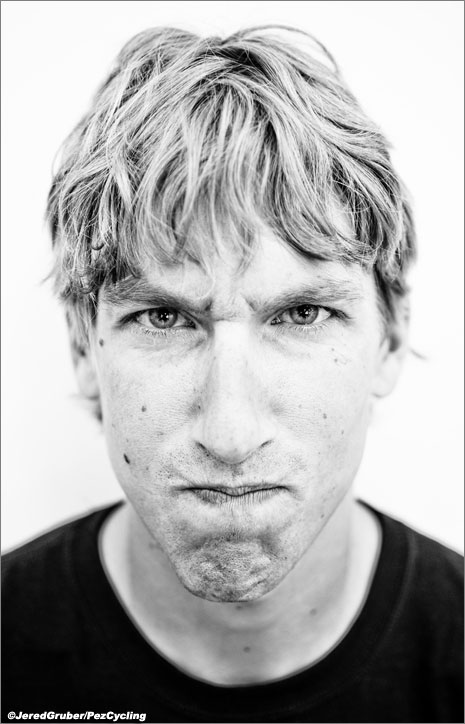 ‘Some days I’m fine with it and others, my legs just want to unleash.’

PEZ: Did these circumstances show you who your friends are ?
TZ: Yes, it showed me that I have an awesome support system! Really, between my family, friends, and peers I’ve had overwhelming support. There have been a few instances where inflammatory material has been published about me..ahem… (a reference to the writer) but none of the people who wrote those things know me. That has been absolutely critical in my ability to deal with all of this and move forward.

PEZ: How are you coping mentally with your situation ?
TZ: I’m good! I definitely miss racing at times but I’m a happy guy. I was able to stay at home this past year and do things that I haven’t done since starting racing seriously six years ago. 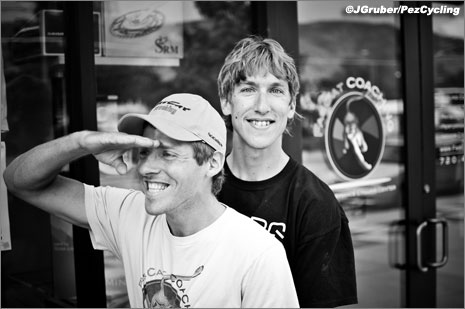 PEZ: You said you were going to finish with the bike – but I see you did an excellent time in a non UCI TT, recently.
TZ: Yeah, like I said – I really miss racing at times. It’s a conflicting feeling to know that physiologically I was made to ride a bike fast and I’m in the physical prime of my life, yet not having the option to compete. Some days I’m fine with it and others my legs just want to unleash. Grrrr! 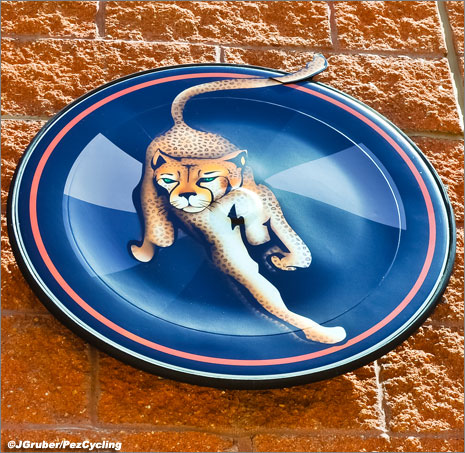 PEZ: How have you been keeping the financial wolf away from the door ?
TZ: Mostly I’ve been coaching cyclists at FasCat Coaching in Boulder. The owner Frank Overton and I have been friends ever since he started coaching me in 2004 and we decided that this was a good fit. I’ve had a lot of fun with it and I’ve been learning a lot along the way. I’ve also been dabbling with a part time job using my chemistry degree at a company named Microbac.

I also dance for an escort service on the weekends, look me up for your entertainment needs.

PEZ: I’ve heard that a certain big name team will take you on after your suspension is up.
TZ: Really? That’s news to me! Maybe they need someone to wash wheels? 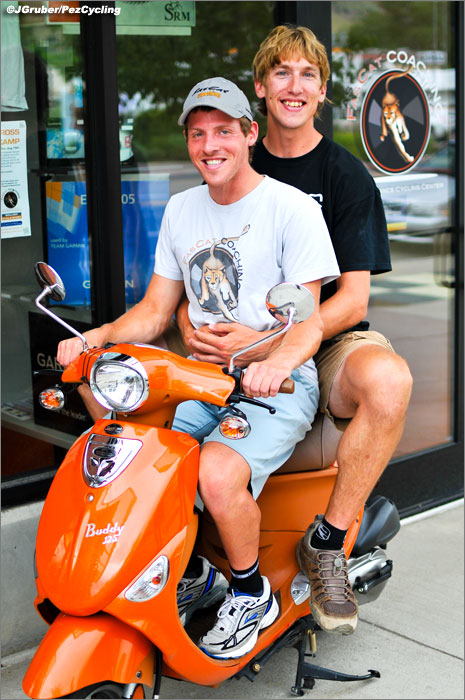 PEZ: What message would you like to give to readers about your situation ?
TZ: My message is something that I’ve struggled with this year. Work to separate all of these doping scandals from the sport of cycling in your mind. Cycling is beautiful and it’s bigger than the cheaters and all of this nonsense. Let’s not lose sight from what drew us to the sport in the first place. I believe that the sport is cleaning up but I know that there will always be cheaters. I’ve come to terms with that belief because I think that the good in cycling far outweighs the bad.

***
With thanks to Tom Zirbel for his time, words, and nice line in humour.