Craig Lewis (Champion System) is no stranger to bad crashes; in 2004, whilst riding for TIAA-CREF in the Tour of Georgia, he was hit by a motor vehicle – breaking 47 bones. Last season, on stage 19 of the Giro, he and HTC team mate Marco Pinotti were involved in a bad crash and were rushed to hospital. Ed Hood recently caught up with the Boulder, Colorado resident after a stage win at the Tour de Beauce.

Looking back at last year’s Giro crash, Pinotti is well on the way to 100% fitness, under-scored by a fine win in the final time trial of this year’s Giro. Whilst Lewis still has a way to go to recover fully from a badly broken left femur, not to mention broken ribs – his recent win in 160 kilometre stage two of the Tour de Beauce bodes well for the future.

His bad 2011 was further compounded by the HTC team’s failure to find a sponsor for 2012.

But the 26 year-old American is nothing if not resilient. 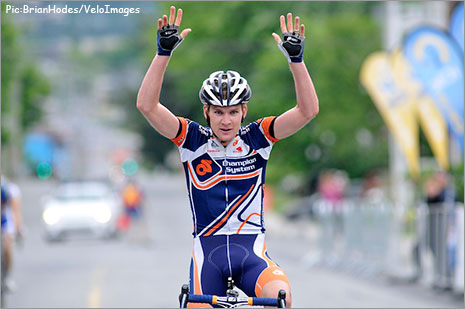 Back in 2007, Lewis moved up to Slipstream after three years at TIAA-CREF, and showed much promise in his pro debut.

The following season he moved to Colombia and he would stay with the team through the metamorphosis to HTC and the eventual demise.

A ninth place in the US Pro championship and eleventh in the Tour of Lombardy were the highlights of that year.

In 2009 his first pro win arrived – the team time trial in the Tour of Romandie.

He also took seventh on GC in the Tour of Ireland and made a huge contribution to team-mate George Hincapie’s win in the US Pro championship. 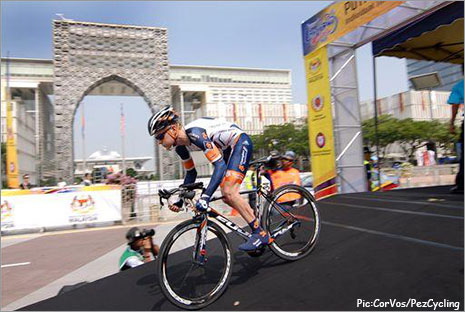 In 2010 he rode his first Giro and took another top ten in the US Pro championship.

He went back to the Giro in 2011 and it looked like it was set to be a good year for him when he flew across the line as part of the victorious HTC train in the Giro’s opening TTT in Turin.

But the Giro can be a fickle mistress and with just one day to go until the closing time trial, Lewis found himself on the tarmac with Pinotti.

That was the beginning of another long, frustrating time off the bike.

But Champion System – Asia’s first Pro Continental squad – came to the rescue as far as a contract for 2012 was concerned and Lewis served notice in Beauce that he’s back.

We spoke to him a few days after Beauce, looking forward to a well earned mid-season break from racing and travelling.

PEZ: It must be good to be back, Craig?
Craig Lewis: It’s been a long time – when I crossed that line it was a moment of relief, reward for all of the hard work I’ve put in.

PEZ: Talk us through the stage win…
CL: Three of us got away around 40 K into the stage, the bunch held us at around three minutes, all day.

It was a tough stage, up and down with wind and rain but coming into the last 30 K we still had two-and-a-half minutes and I could see that we still had a chance.

I took control and did everything I could do to make sure we stayed away.

James Williamson (New Zealand & Pure Black Racing) got dropped on a climb with about 30 K to go, so there were just two of us left.

Jamie Sparling (Canada & Raleigh) was fading and I said to him that provided he agreed that he wouldn’t contest the sprint, then I wouldn’t attack him.

He agreed, and I ended up doing 28 or 29 of those last kilometres on the front.

I felt a little nervous coming in to the finish because you never know if a guy will stick to his word – but he did.

PEZ: How do you rate the Tour de Beauce?
CL: It’s an awesome race; it reminded me a lot of racing in France.

We rode the Circuit of Lorraine and the parcours were similar – two or three kilometre rollers on big roads.

With a 120 rider field and small teams it was a very aggressive race – it sure seemed longer than six days.

PEZ: Do you think you’re back to your pre-crash level of fitness?
CL: I still have a ways to go, I’m not at the level I was, a notch down – but taking the stage win was special. 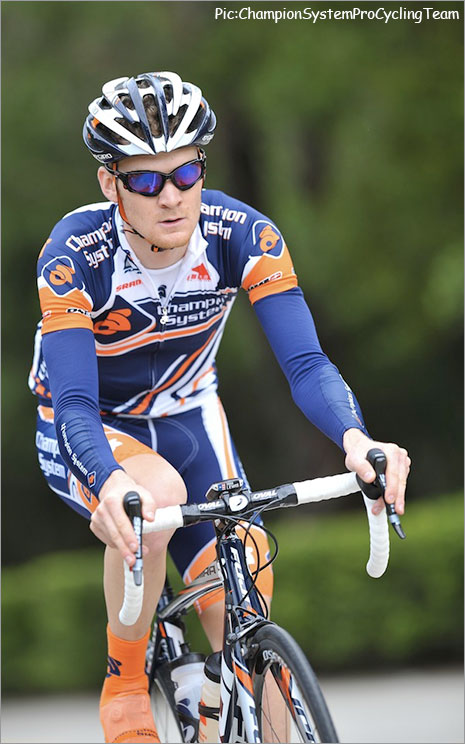 PEZ: When we spoke at Christmas, you’d recently had a bone graft.
CL: Yeah, I’m still dealing with that – but it could take 12/18 months.

There’s been a small gain of bone but it’s still incomplete, there’s a gap which means pain and discomfort.

PEZ: How does Pro Continental compare to World Tour?
CL: Even with HTC, when we’d go to a smaller race and think; ‘there’ll be more opportunities here.’

But you start and are surprised by how hard it was – the level’s maybe not so high but it’s more chaotic.

There are guys there who you don’t know, there’s a big disparity in skills and it’s very hard to control a race with just a six man team.

PEZ: It’s been a cosmo 2012 for you – Langkawi, Europe and North America.
CL: The travel is definitely wearing on me a little, but it’s cool to see the different countries and cultures.

It’s especially good to see how the sport is growing in Asia – but I’ve had as many race days this year at this time as I did with HTC.

And if you factor in the travel days – during some of which you’re crossing 16/17 time zones in – there are big demands being made.

The thing is that after journeys like that, you can’t just jump back on the bike and train hard the next day. 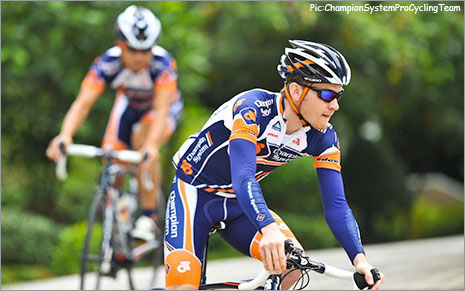 PEZ: What’s the management culture of the team?
CL: Pretty much American – most of the staff are from the US and whilst the mechanics are Estonian, they speak English.

It feels American, but having said that we have a big Asian campaign coming up – Qinghai Lakes, the Tour of China and the Tour of Beijing.

We spoke about me riding Qinghai but we decided it best that I take a break and get ready for the Tour of Utah.

Qinghai is at 4,000 metres altitude and it takes a lot of recovering from that effort, maybe two or three weeks.

PEZ: Champion Systems is a Chinese company, is there much of a Chinese influence on the team?
CL: Sure, most of the sponsors are Chinese and we have Asian riders on the team.

One of the squad’s aims is to develop the Asian guys and get them to a higher level.

There are Malaysian guys on the team too and they’re so enthusiastic, they soak it all up like a sponge.

It’s good to be showing them the ropes in European and North American racing.

The team language is English, but we have a translator for the Asian guys. 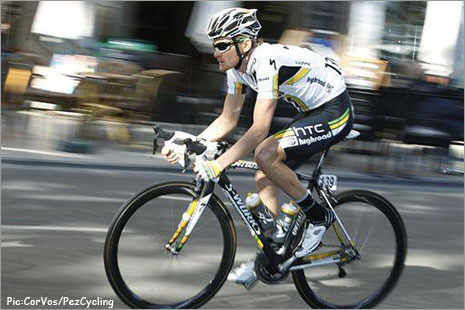 The days when he’s on form are harder to pin down these days, but he’s still as tough as ever.

PEZ: And you’re on Far Eastern frames?
CL: Fuji is a Japanese/US company and they’ve been amazing to work with and the bikes are cool.

When Geox pulled out we became their number one team and they work very closely with us on product development – they’re in touch every week.

PEZ: Are management happy with how the team is doing, so far?
CL: Definitely, in the first year of a programme it’s hard to know what to expect – you have to build the bonds.

We started slowly but the wins are coming, now.

The next step is to get the Asian guys up there on the podium.

PEZ: Did you miss riding the Giro?
CL: I didn’t see much of it because I was travelling whilst it was on – but it was good to see Marco Pinotti winning the final time trial, I sent him a message to congratulate him.

Seeing that inspired me in Beauce and he sent me a message when he saw that I had won the stage. 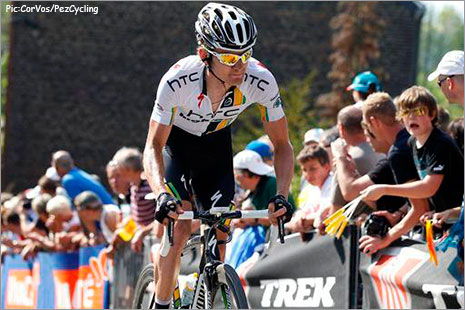 PEZ: What now?
CL: The Tour of Utah; and we hope to be riding Colorado – then a small Euro programme before our Asian campaign in the fall.

******
Happy endings aren’t common in pro cycling, so it’s good to hear about one, now and again.