Belgian professional Gorik Gardeyn’s name has been a familiar one in the European peloton for more than a decade – but for season 2012 he’ll be signing on for events on the other side of the globe, as well as the ‘old continent.’ The 31 year-old has just signed for Chinese Pro Continental team, Champion Systems whose programme will encompass races on the UCi Asian Tour, not just the European Tour.

Gardeyn first hit the headlines as an amateur, winning the Championship of Flanders and U23 Paris-Tours in 1999.

The following season saw him win the U23 Het Volk and ride stagiaire for Lotto at the season’s end.

They were impressed and for season 2001 he was a ‘Lotto man’ and would remain with the team for four seasons.

His debut year went well with a win in Dentergem and a stage in the Tour of Denmark.

In 2002 his best results were second in the GP Rudy Dhaenens and third in the season-ending Putte-Kapellen race.

The following season was unremarkable but in 2004 he started and finished the Giro and was second in the tough Omloop het van Waasland.

For 2005 he pulled on a new jersey – that of the Mr. Bookmaker team; the change of air agreed with him and wins came in the Classic Haribo and Omloop het van Waasland.

Mr. Bookmaker became Unibet for 2006 and Putte-Kapellen fell to him.

In 2007 Unibet fell afoul of the political struggle between ASO and the UCi – but despite this, Gardeyn won in Dentergem and a Tour of Belgium stage. 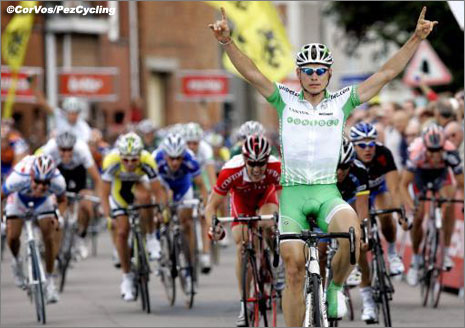 Gorik takes a stage win at the Tour of Belgium in 2007.

Lotto welcomed him back in 2008 and sixth place in Dwars Door was the hi-lite.

Season 2009 was compromised by a bad crash in the Eneco Tour and for 2010 he found a new home at Vacansoleil. 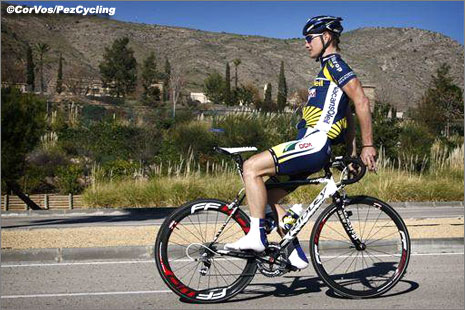 Need it be said? Gorik can ride a bike any way you hand it to him.

A second place in the Heiste Pijl in his first year – and a similar placing in Kortrijk this year were the high lights of his time with the Dutch team.

Gardeyn spoke to PEZ just days after Christmas with the ink not long dry on his new contract.

PEZ: Congratulations on the contract, Gorik – how did the deal come about?
Gorik Gardeyn: I have friend who is also a friend of Ed Beamon, who is sport director with Champion Systems, he put me in touch.

We had a good conversation about cycling and about the team and I decided to sign – it’s a challenge which I’m looking forward to.

The contract is for one year, but contracts of any kind aren’t easy to get, this year. 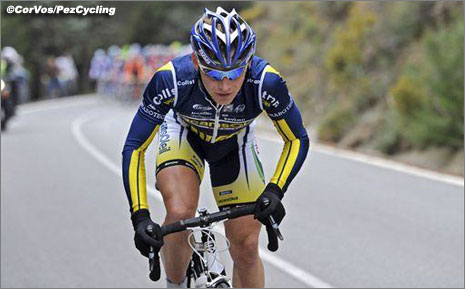 PEZ: Do you still have friends with no ride for 2012?
GG: Yes, this winter you’ve certainly needed patience if you’re looking for a contract – but it’s getting to be too late, most of the places have gone.

PEZ: Did you get as much notice as you would have liked that you weren’t being retained?
GG: Maybe not as much as I would have liked; I did my thing for Vacansoleil and I’m sad that I couldn’t stay.

I’m very close to Stijn Devolder but he hasn’t had the best of seasons and couldn’t really use his influence for me.

Even although this year wasn’t the best for him, his mental and physical condition is good and I think we’ll see him back to his best in 2012. 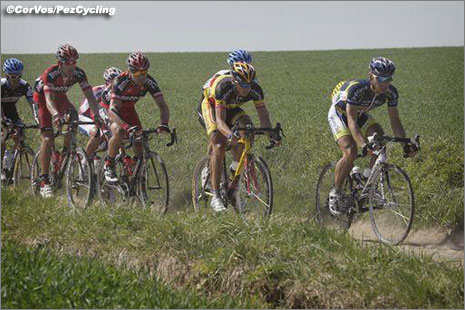 PEZ: Do you know much about Champion System?
GG: They make race clothes for cycling, triathlon, running and moto-cross; they’re a very big concern.

The aim of the team is get the name better known in Europe and the US.

PEZ: And you’ll be racing in Asia?
GG: Yes, I’m excited about that – it’ll be new to me, even although I’ve ridden the Tour Down Under twice and the Tour of Qatar three times.

The team presentation will be in Beijing on the 6th of next month and then we go to visit the Champion Systems factory in Hong Kong. 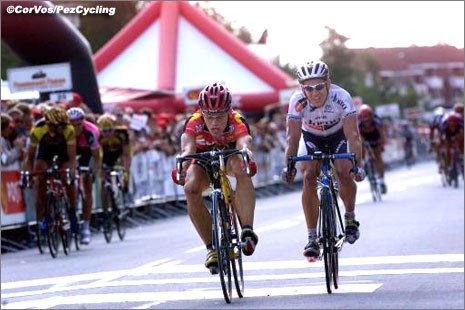 Gorik edges out Robbie McEwen early in his career for victory.

PEZ: Is your programme decided, yet?
GG: Not yet, we’re going to sit down and agree on that; we have a lot of applications out to races where we’ll have to rely on the wild card – but we’ve received a lot of invitations, too.

At the training camp we’re going to agree programmes which are best for the individual riders and the team.

PEZ: Where is your first camp?
GG: Hainan Island off China, we have a 14 day camp there, next month – usually I’d be in Spain for early season training so it’s something different. 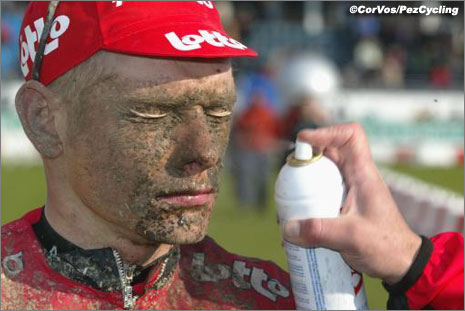 PEZ: Will yours be a mentoring role?
GG: Yes, there are a lot of young riders, ambitious guys – part of my job is to guide and teach them but without putting them under too much pressure; share my experience.

Most of the guys are new to me but I know guys like Will Clark, Aaron Kemp and Jaan Kirsipuu.

PEZ: Do you have a coach?
GG: Yes, but I also understand my body and train on ‘feel’ – you have to strike the correct balance between fatigue and effort.

I use Powertap and heart monitor but I also understand the feelings in my legs and heart.

Today’s training is a typical session for me, I did four-and-a-half hours with Stijn Devolder, Leif Hoste and Niko Eeckhout – it was very windy but we averaged 32/33 kph.

Niko always wants to go hard – but I think that once per week hard is enough at this time of year. 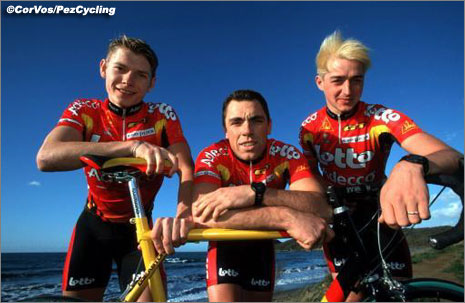 Gorik goes way back with Niko Eeckhout – here he is with Eeckhout a long, long time ago with Lotto (Gorik left, Niko center).

PEZ: Did you take a day off training on Christmas day?
GG: Yes, my sister and her children came to our house and we had a great family meal.

But I did an extra hour the next day – the food was too good and there was too much of it!

PEZ: Next season will be your 12th in the pro peloton – what are the biggest changes you’ve seen?
GG: The Pro Tour has made a big difference, the participation in races in so much more international these days and it’s good that guys get a chance to race in their own countries – like the Australians in the Tour Down Under.

And it’s good we’re looking at opportunities in places like China a Russia – but it’s important to remember that the history of the sport is in Europe.

The race radios mean races are much more calculated these days, often the GC from the first day is the GC at the end – it’s much more controlled. 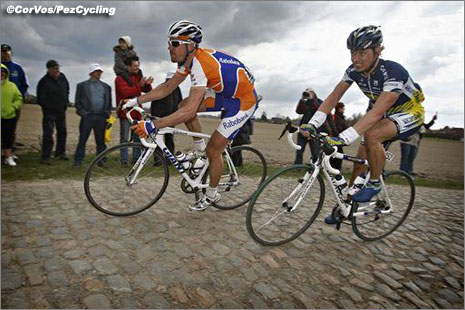 On the Roubaix cobbles.

PEZ: You were with Unibet – that wasn’t a well handled situation.
GG: No, in football it was OK for them to have jerseys which advertise bookmaking – but not in cycling?

I had one of my best seasons there; it was a great pity that the team couldn’t continue.

That’s the thing with cycling, it’s not just about riding the bike; it’s the stuff around it – lobbying, politics . . .

PEZ: You seem to have ‘favourite’ races – Putte-Kapellen, for example?
GG: Some races I have good memories of and I perform well in them, and others fit well with my schedule – it’s sometimes difficult to get the ideal schedule but we’ll discuss mine at the training camp.

But you also need a change – you can’t just keep ordering the same dish off the menu! 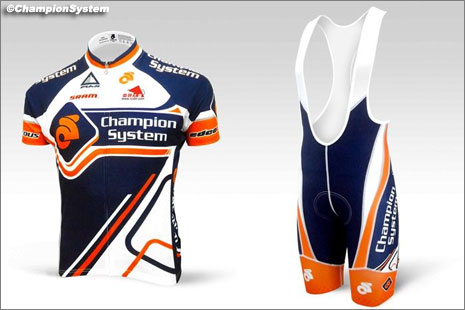 PEZ: What’s still ‘to do’ for you, in cycling?
GG: I’m just very thankful that I have another chance to race – it feels good to be with this team and I’m looking forward to my future with it.

I’m still ambitious, motivated and healthy – in fact, my head is probably better now than it was a few years ago.

I feel that this season I am coming from the dark back into the light.

Toolbox: Making a Difference in Your Mental Fitness