Rider Interview: Roadside at the Westrozebeke kermis in Flanders Ed Hood spotted a rider worth a chat, AN Post Chain Reaction’s Irishman, Conor Dunne. At over two meters tall and racing aggressively he was a hard man to miss on his green XXLarge Vitus. Ed caught up with him after the race…

At the Commonwealth Games Road Race last Sunday there was not a start sheet to be had. However, at the Westrozebeke kermis we attended the day after the Tour finished there was a start sheet on the street within minutes of the sign-on closing.

I’m not sure what that says about the thinking of the Games organisers but it means sad guys like Dave and I know exactly who’s going to be on that start line in West Flanders.

The first scan is for the stars; the second is for riders from back across the North Sea in the UK. ‘Conor Dunne, AN Post’ is a good Irish name – we had to have a word. 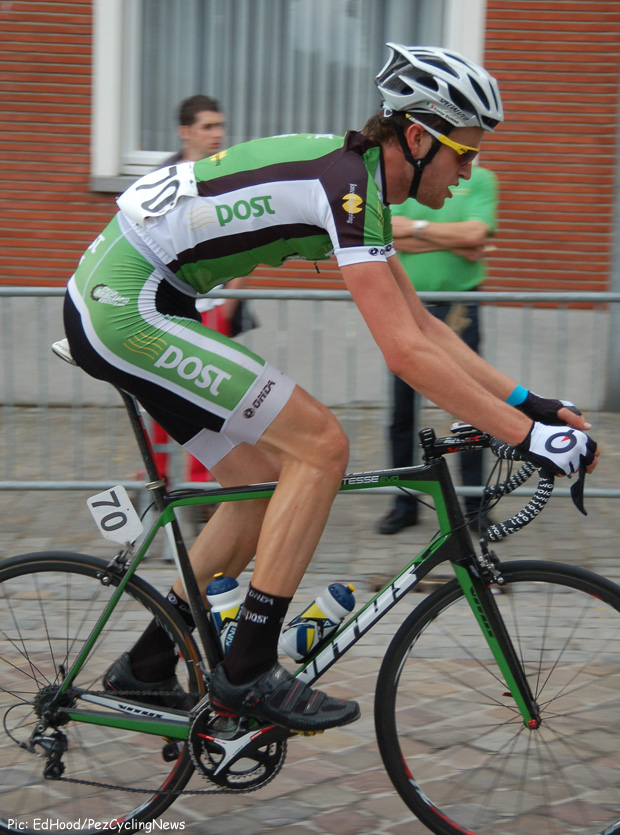 PEZ: It’s a long way from your second spot a few years ago in the British Junior TT champs to Westrozebeke, Conor.
I actually won the British Junior TT Championships in 2010! But yes, it has been a long time since those days and a lot has happened in between. I always wanted to come to race full time in Belgium after so many trips racing here with John Barclay as a junior. I owe a lot to him for setting me down this path.

PEZ: An Irish name and nationality but born in England and riding British champs as a junior?
Yes, I have both an Irish and British passport. The Irish link comes through my Dad’s side of the family. My Granddad was from Edenberry, County Offaly and my granny came from Charlestown, County Mayo, where I still have family. They moved to London, near where I grew up, before my Dad was born. I have always been extremely proud of my Irish roots and jumped at the chance to represent Ireland on the bike in my first year as an U23 rider.

PEZ: You lead the Ras last year – that must have been cool?
It was quite a special moment and I kind of surprised myself at the time. I had felt good during the race and was able to ride aggressively before taking the Stage One win which was a fantastic moment I will never forget. Then to enjoy my day in yellow the following day was just as special. 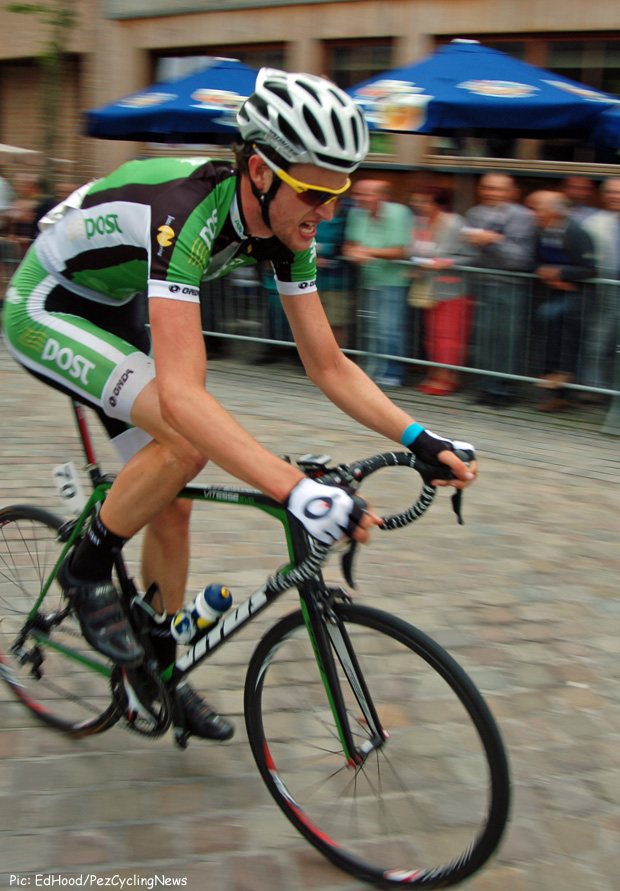 PEZ: How did the AN Post ride come about?
Kurt Bogaerts, the team manager, was the Ireland manager at the U23 European Championships and I got to know him well there. Also the team has strong connections with the Irish Federation, so when the opportunity presented itself to ride for the team I jumped at it.

PEZ: How do the palmares look for 2014?
They have been thin on the ground in the first half of the season. I haven’t had the best luck suffering with flu in February which left me bed ridden for eight days. I maybe tried to come back too quick, ended up coming down with more smaller sicknesses before I took a break in May and built my form back up again slower. It was a tough time.

I feel I’m coming back to my best now and just this weekend finished 11th overall at Kreiz Briez Elites a UCI 2.2 in Brittany. I also got 5th on the first stage from a breakaway situation.

PEZ: You were going well at Westrozebeke.
Yes, thank you. It was good to be in the mix towards the end. So many Topsport riders made things tricky though! 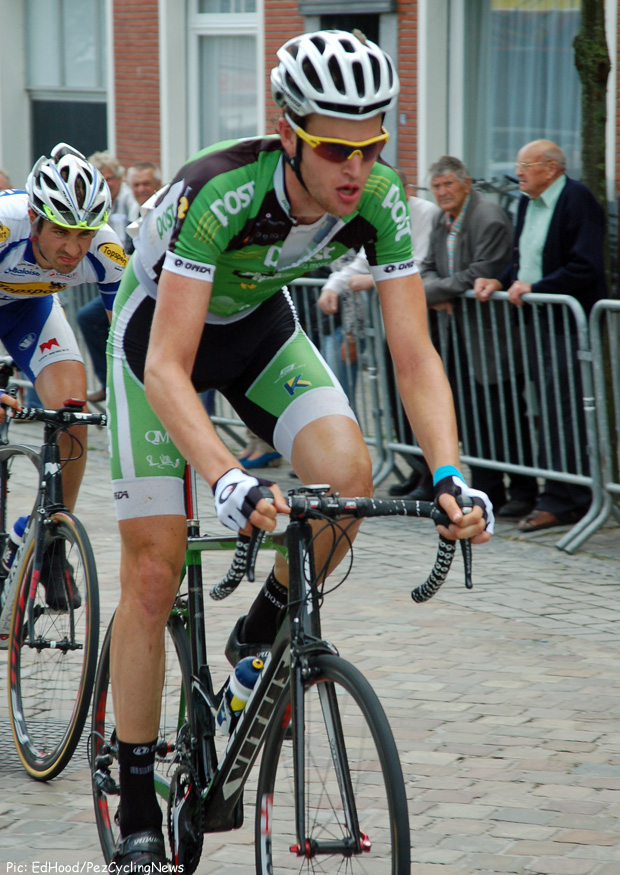 PEZ: Where’s home in Flanders – what’s it like?
I live in Zottegem, East Flanders in a flat above my coach, Kristof de Kegel’s gym. I have lived in the Zottegem area for nearly four seasons now and it feels like home to be honest. I know all the training roads and have some friends here, its also close to Gent which is always great when you need some time to relax.

PEZ: How has your race programme been?
The team has an awesome programme, I only wish I could have utilized it more at the start of the season but unfortunately the sickness put paid to that. I’ve still got to race some great races such as Marseillaise, Etoile de Besseges, Nokere Koerse, Halle Ingooigem and Handzame Classic.
There are a lot of big races left with the team for the end of the season and I hope to be part of the selections now that the form is there.

I race the Prudential London Classic this Sunday, so that will be a really cool opportunity.

PEZ: What’s your favourite kind of race?
Rolling, heavy roads where it’s easy for a breakaway to get out of sight quickly. Much like the roads in Ireland! I also love a good flat cobbled section, when you’re 2.04m it would be rude not too. 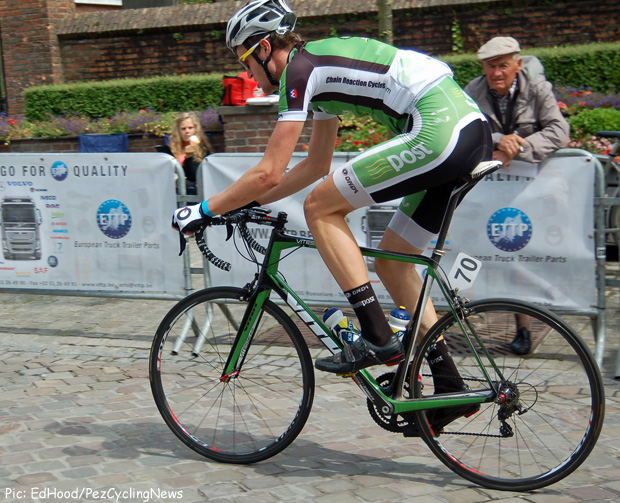 PEZ: As a chrono man do you get much chance to demonstrate your skills ?
Yes there are plenty of opportunities, I have been lucky to represent Ireland at the U23 European Championships this year where I came 22nd. With some more preparation I’d like to give the Worlds a crack as well if I can get the nod from the selectors.

PEZ: What are the best aspects of Flanders?
Friendly people, everything in Gent, the history of all the training roads and having a good concentration of cyclists in one area who I can meet for a coffee.

PEZ: And the worst?
Deteriorating bike paths, tractors driving at 25km/h everywhere, supermarkets shutting on the numerous bank holidays and those dreaded mosquitoes.

PEZ: Talk us through a typical week.
I’ll either be training hard or out for an easy coffee ride to meet a team mate. I like to try and get out and do things to avoid cabin fever, I love a good visit to Gent or a nice bbq.

If I’m racing though then I’ll mainly be getting ready for the race in the days leading up to it. A cyclist life isn’t too exciting when off the bike!

PEZ: Have you succumbed to the frites at all?
Oh, of course. But only once this season and that is a fact!

PEZ: How do you spend your down time?
I’m studying for an Open University degree so I’ll do a bit of that. I like to read books and listen to random music which most people think is terrible. Mainly I just enjoy the peace, quiet and comfort of the sun loungers in our garden.

PEZ: How do you rate Belgian TV and radio?
I think the radio is awesome to be honest, Studio Brussels is probably my favourite radio station. I’m not sure I can comment on the TV, sadly my Vlaamse skills still aren’t up to scratch but the cycling coverage is obviously top notch. 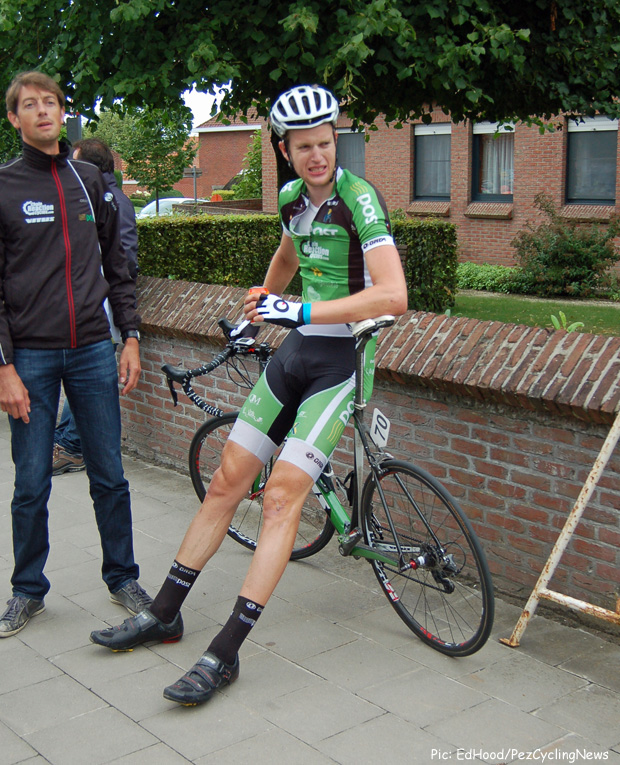 A Chat with Amy Floyd